Although we've spent almost 50 nights this year in our trailer, we just had to try one more camping trip. So in mid-November we headed up to the Sequoia National Forest, in between Kings Canyon National Park and Sequoia National Park, for a four-day trip. At around noon on Friday, we set up camp in a remote area near Big Meadows; our nearest neighbor was about a half-mile away. This was not a campground -- the national forest allows "dispersed camping" (or "boondocking") in many areas. We had a wonderful view of the Great Western Divide. That afternoon, we hiked to a remote grove of giant sequoias (Evans Grove), north of Buck Rock. The dirt roads were very rough, but we had no trouble. The grove was lovely -- absolutely silent. We saw no one during the entire hike.

On the next day (Saturday), we took a long steep hike from the Wolverton area up to Heather Lake. The total elevation gain was over 2000 feet, and the total mileage was more than 9 miles. At the top of the route, there were tremendous views of the entire Tokopah Valley: 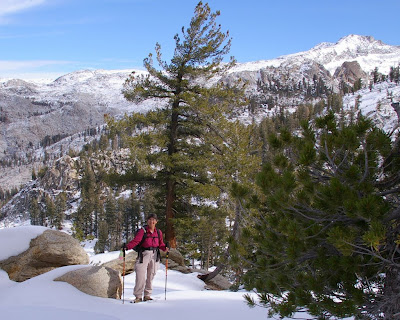 The lake itself was surrounded by snowy rocks, reflected in the water: 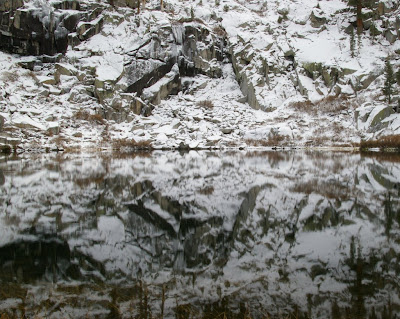 On the way back from Heather Lake, we tried to take the Watchtower route, which is a narrow trail along a cliff overlooking the valley. But we had to turn back because the trail was so narrow and icy: 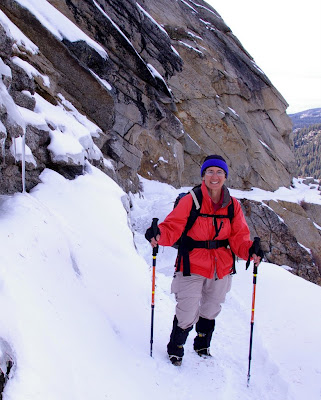 (This picture does not really do justice to this trail -- immediately behind Felice, there is an icy chute about 18 inches wide. On one side is an icy rock wall. On the other side is a 2000 foot cliff. We did not cross the chute!)

As we finished the hike (on a safer route), it started to get pretty cloudy; the weather service had predicted a dusting of snow over 9000 feet and a few light rain showers below that elevation. We weren't too worried, since our campsite was at 7500 feet. Sure enough, late that evening, it started to sprinkle, making a lovely tinkling sound on the roof of the trailer. We were snug and warm inside our tin box, dressed like Eskimos and drinking hot tea.

After we went to sleep (under a comforter and four blankets!), it started to rain a little harder. Around midnight, the rain suddenly stopped; it was very quiet. At first, I was glad that the rain had stopped; I had been worried that the ground would become so muddy and soft that we wouldn't be able to tow the trailer out of the woods and back to the roadway. But after a while, it dawned on me that the silence might mean that the rain had simply turned to snow. Around 1:30 a.m., I crawled out of my nice warm bed -- the inside of the trailer was at about 40 degrees -- and peeked out the door of the trailer. Surprise! There was already about a half a foot of wet snow on the ground, and it was essentially a full-scale blizzard.

We had to make a decision -- what to do? If we simply waited it out until the morning, we could have been stuck in the snow -- my SUV and my trailer only have about 10 inches of ground clearance. If the snow got much deeper, we couldn't have towed the trailer out of our campsite. Remember, also, that this was not a campground -- this was just the wilderness. And the Forest Road leading to our campsite was not a maintained or plowed road.

So we reluctantly decided that we had to leave right then. It felt like we were being too conservative, and nobody wants to go outside in that kind of weather; but we thought it was the prudent thing to do. Without rushing, without panicking, we bundled up in our waterproof garments and headed out into the storm to pack up our equipment and hitch the trailer to the car. It was absolutely pitch black, and very wet and cold. Fortunately, we had headlamps; also, we have hitched and unhitched so many times that we could do most of the tasks blindfolded. A lot of our tools and equipment had already been covered by the snow, but we were able to find all of them. The hardest part was clearing the snow off of the awning, which had accumulated a thick, wet, sticky layer of icy snow.

When it came time to hitch up (after about an hour and a half of packing up), the car windows were completely covered in ice and snow. I was able to clear them off a little bit, but I could hardly see anything. Fortunately, Felice skillfully guided me back so that we were able to drop the hitch onto the ball the first time.

The next question was whether the car would be able to move the trailer over the soft wet dirt and through the deep snow. I put the SUV into "four-wheel drive low," the high-torque setting. No problem! Quite a relief. We were able to move onto the roadway and slowly drove out of the woods for a couple of miles to the highway. As we expected, the highway was not yet plowed (since the storm had been a surprise to everyone), so we drove very slowly through deep snow to the Grant Grove area of Kings Canyon National Park. It was sort of dreamlike -- the dark, deserted highway, the blowing snow, at 3 a.m., with the trailer trundling along behind us, pushing through the deep snow.

Since the roadway had been very cold prior to the storm, the rain had frozen to the pavement, creating a layer of black ice under several inches of snow. The trickiest part of the drive was on the banked turns, where the highway designers had intentionally tilted the roadbed in order to accommodate cars traveling at 45 mph. At 10 mph, however, the car and the trailer tended to slide sideways a little. No big deal, but it was interesting. (I had decided not to attach the anti-sway bar to the trailer, since I was concerned that if the trailer slid sideways, it would drag the back of the car along with it. I'm not sure that was the right decision, but we made it out okay.)

We toyed with the idea of heading down the hill to Fresno but decided that it would be safer simply to sleep in the trailer in the parking lot near the ranger station at Grant Grove. When we awoke the next morning, there was still quite a bit of snow and ice on the trailer, although it had rained again in the early morning hours (since Grant Grove is only at about 6500 feet): 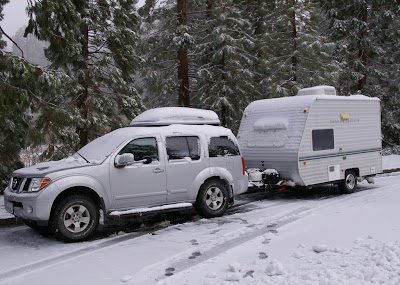 In the morning, one of the rangers asked us what we were doing in the parking lot, and we explained. She told us that we had done exactly the right thing: other campers who had stayed throughout the night at Big Meadows had gotten stuck and had to call for tow trucks to get out, which was enormously expensive. So we didn't feel too bad about evacuating, even though we missed our lovely remote campsite.

And actually, to tell the truth, the "midnight blizzard fire drill" was sort of fun. It was a challenge, and I was pleased that we were able to deal with it in a calm, methodical way, without rushing, and without making mistakes. We had to force ourselves to follow our checklists carefully, even though our instinct was to scramble out of there before the snow got too deep. Plus, the whole experience gave us the spurious sense of being rugged individuals having a legitimate adventure. It was also fun to work as a team to solve the little problems we encountered.

So, instead of heading home right away, we went for a morning hike in Grant Grove itself. The low clouds and fog obscured the tops of the snowy trees: 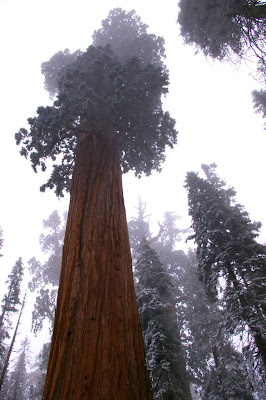 We later took a hike through the North Grove area. If you have never seen a Sequoia up close, here are some indications of the actual size of these trees. It is difficult to find a place where you can take a picture of an entire tree from top to bottom; we found a couple of places along a fire road in which I could stand far enough back from the tree to encompass the whole thing. First, a long shot of one tree -- look for the little orange dot at the bottom of the tree -- this might be worth clicking on to enlarge, and then hit back to get back:

And, from the very same picture, here is an enlargement of the orange dot, i.e., Felice: 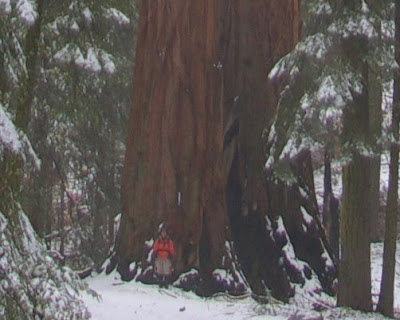 Also, here she is peeking through a cleft in a grouping of trees: 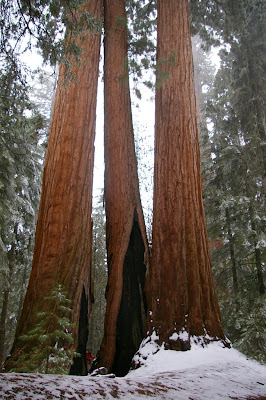 And here's a close-up of the cleft, again from the same picture:

To get another feel for the scale, here she is next to a tree trunk: 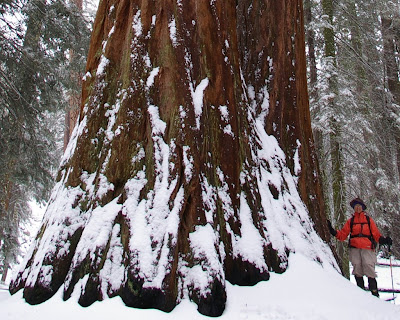 We decided to stay another night at the Azalea campground, which was very quiet:

We discovered that camping in cold and snow is not impossible or unpleasant, as long as the temperature does not drop much below 20 degrees. (Any lower than that, and the plumbing might be damaged.) We had plenty of electrical power, with two group 27 deep cycle batteries. We could run the propane heater during meals and when showering. The only problem was what to do with all of the damp clothing -- we hung it up on hooks, but things did not dry very quickly.

The next day (Monday), we took a hike through the Redwood Canyon grove. It was very wet and just above freezing; imagine the "refrigerated vegetable room" at Costco. But we didn't mind because we were properly dressed. There was even a little remnant of fall color on the dogwood trees: 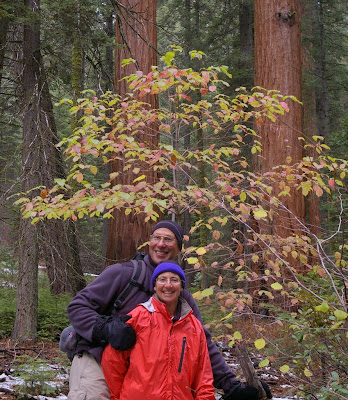