September 3:  Before we packed up to leave, the sunrise at Two Medicine forced us out of bed once again: 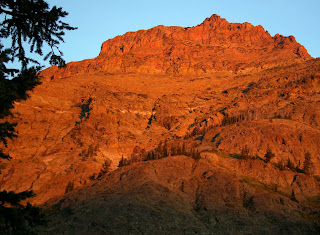 Many Glacier was an easy two-hour drive from Two Medicine.  The campground at Many Glacier was nicely shaded, but (unlike Two Medicine) the trees blocked the views of the surrounding mountains.  As soon as we had set up camp, we took a short hike to Apikuni Falls, scrambling over some rocks and boulders to get to the base -- Felice assumed her usual position of worship in front of the falls: 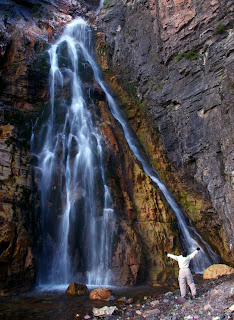 September 4:  We caught the 9 AM boat across Swiftcurrent Lake to the Grinnell Glacier trail. It was a fairly strenuous hike (8 miles and 1600 feet of elevation gain).  The morning started out cloudy and cool, but the clouds burned off as we climbed, revealing the deep blue-green Grinnell Lake far below us.  From different vantage points along the trail, the color of Grinnell Lake kept changing, depending on the lighting. It went from turquoise to aquamarine to emerald and back again, all day long; the extraordinary color is caused by the "glacial flour" suspended in the water, which absorbs all of the color in sunlight except for blue: 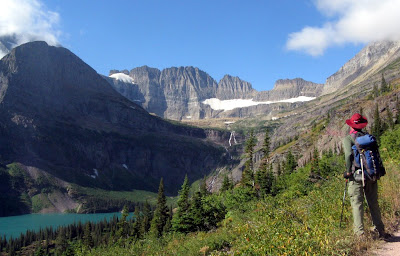 As we climbed up toward the glacier, we saw bighorn sheep grazing in a meadow below the trail: 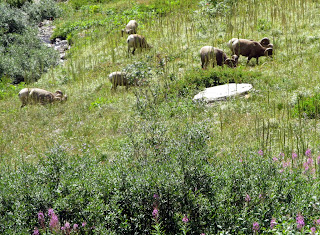 Nearer to the glacier, above treeline, two rams perched on a rocky ledge above us:

One of them turned his head toward us, casually posing for his picture: 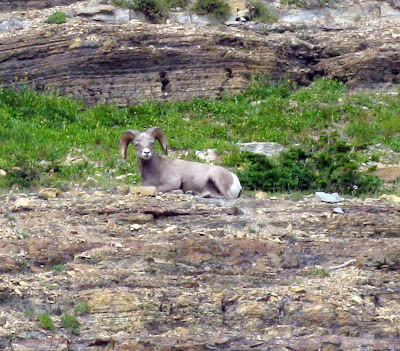 A busy marmot scurried amongst the rocks: 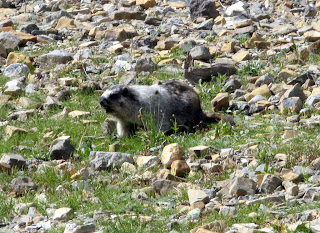 The last ascent up to the glacier itself was pretty steep, but it was worth it; the glacier tumbled down a hillside into a milky blue melt pool with a scattering of small icebergs: 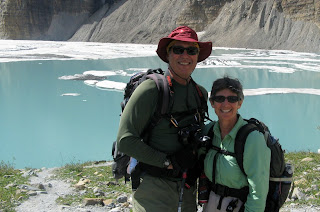 We walked out onto the rocks surrounding the outlet stream -- behind us is the toe of the glacier: 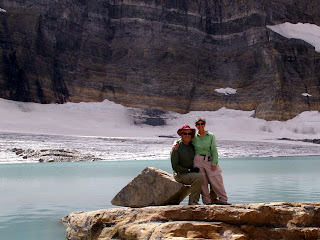 As the glacier retreated, it exposed the rocks that it had sliced.  The concentric rings in this picture are cross-sections of fossil stromatolites, mats of blue-green algae formed hundreds of millions of years ago in a shallow warm ocean and then entombed in sandstone.  The layers of rock were then uplifted when the Rockies were formed and were later carved by the glacier: 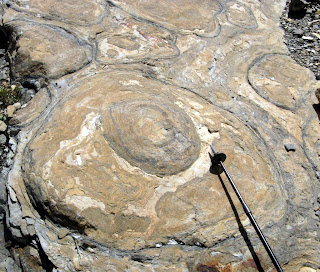 This shot shows the bedding planes of the sedimentary rock, which are gently tilted, forming a shallow border for the body of the glacier: 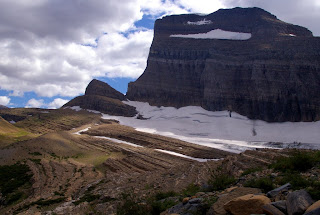 Throughout our travels through the Rockies, we were struck not only by the height of the mountains but by the yawning space of the valleys -- all of that air between the mountains had once been rock that was slowly pulverized by the glaciers and then washed down the rivers to form the whole Mississippi Delta.  We eventually realized that the Rockies are sort of like music -- just as music requires some silence between the notes, the craggy mountains are even grander because they are separated by deep chasms.  In this view toward the south, notice the huge U-shaped valleys left by the vanished glaciers, thousands of feet thick: 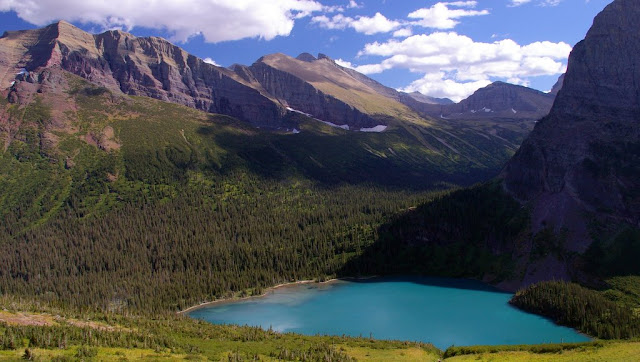 This view is to the east, toward Swiftcurrent Lake and Lake Sherburne.  In the far distance, on the left side, note the curving lateral moraine, a huge tapering gravel and rock ridge deposited by the side of the glacier after the last Ice Age: 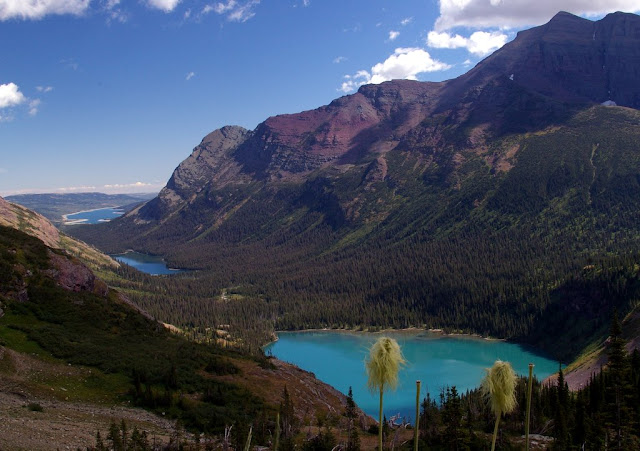 September 5:  This was our day to drive the entire length of the Going to the Sun Road, from St. Mary to Lake McDonald and back again.  The morning was gloriously clear: 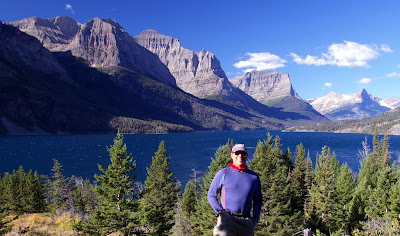 On the way back from Lake McDonald, we stopped at at Logan Pass and hiked the Highline Trail for a few miles out toward Granite Park Chalet.  Although the trail was cut into the side of a cliff, there were cables strung along the rock face; we held onto them as we traversed the ledge: 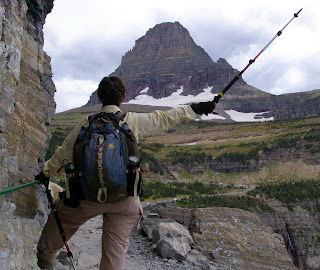 Felice managed to conquer her vertigo and enjoyed the hike in spite of it:

On our way back to Logan Pass, we ran into a family of mountain goats, who were completely unafraid of us, calmly grazing: 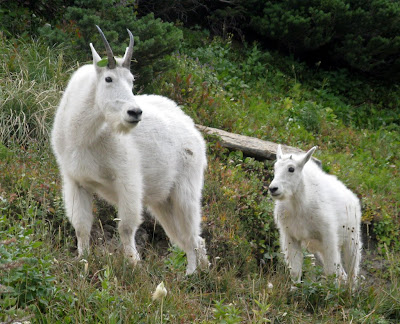 We kept backing away from the goats on the trail, but they kept coming nearer:


Just as we got back to the parking lot, the goats obligingly walked behind the sign for Logan Pass: 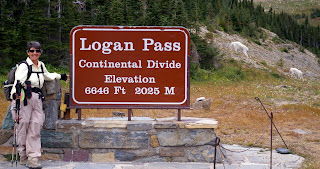 Late that afternoon, on our way back to Many Glacier campground, we ran into a "bear jam" on the road; we soon discovered that there is a group of grizzly fanatics who patrol the roads in this area, lugging around their enormous lenses, hoping for the perfect photograph.  These "bear groupies" had spotted a grizzly on the beach near the lake.  The bear seemed uneasy, frequently sniffing the air for danger.  One of the "experts" told us that there was a larger grizzly in the bushes and that this middle-sized bear felt threatened: 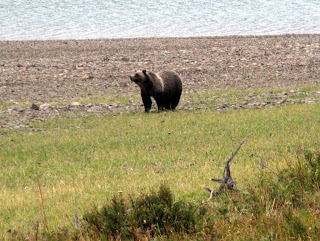 Soon thereafter, he slowly walked into the lake and started swimming across.  Late that evening, after we were safely buttoned up inside the trailer, it rained hard for most of the night.

September 6:   We noticed that there were lots of "thimble berries" growing near our campsite – these berries are similar to raspberries.  They are very fragile and have to be picked carefully.  They are tasty, although they are full of seeds: 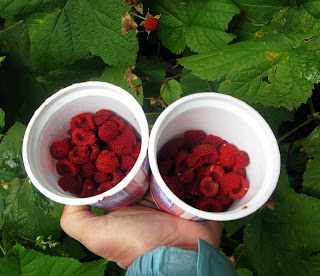 Since it was still cloudy after the rainstorm, we decided not to go for a "view hike" in the high country; instead, we headed back to the Going to the Sun Road, to St. Mary and Virginia Falls.  This is St. Mary Falls: 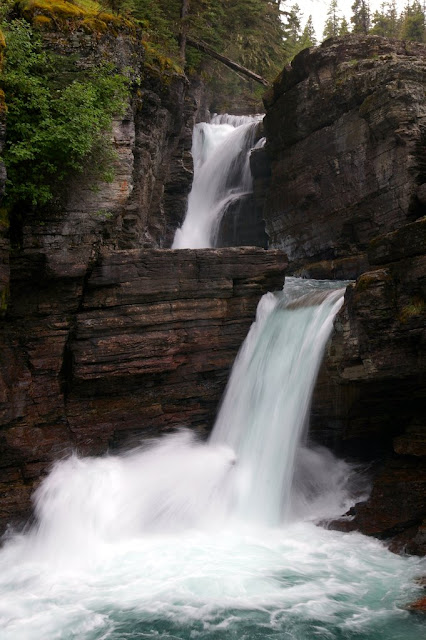 And this is Virginia Falls: 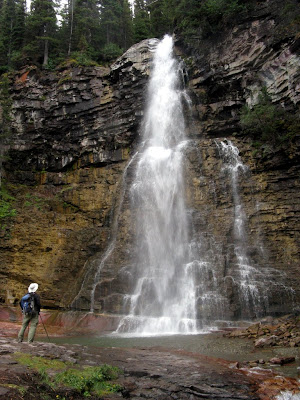 The intricate structure of the falls can be seen in this close-up: 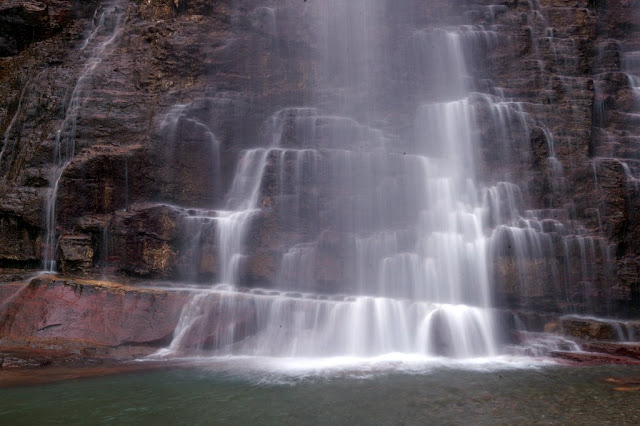 Felice spotted these colorful rocks in a small stream near the base of Virginia Falls, and I set up my tripod for a time exposure.  That's how much of our photography works – Felice spots the shot, and I take care of the technical side: 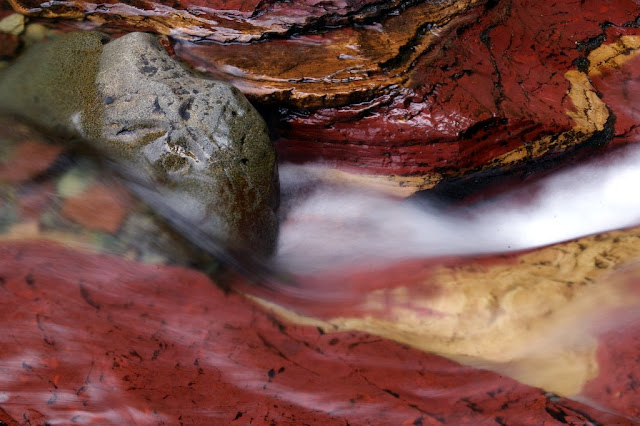 Later that afternoon, as we headed back down to the trailhead, the clouds lifted and we could see fresh snow on the surrounding peaks.  Since the Rockies are sedimentary, the various rock layers tend to trap the snow and to display those wonderful stripes, adding extra texture to the view:

Late that afternoon, the mountains were reflected in St. Mary Lake – that's Wild Goose Island in the middle: 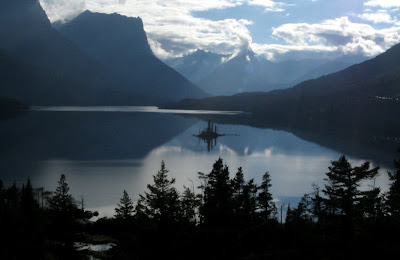 September 7: We hiked up toward Swiftcurrent pass, past Bullhead Lake and Red Rock Falls.  It was windy and very cool, but we found a good lunch spot on a hill overlooking the entire Swiftcurrent Valley -- again, notice the U-shaped valley carved by the glaciers, and imagine this whole valley filled almost to the brim with dense glacial ice: 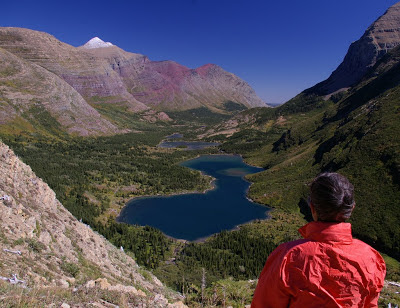 We ran across several of these really striking velvety-brown butterflies, with sky-blue spots and yellow trim – after a little research, I discovered that this was the "Mourning Cloak," which is the official state butterfly of Montana: 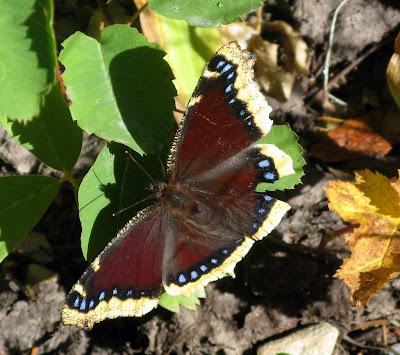 On the way down, we found another excellent huckleberry patch and picked some more of them, all the while looking around for bears.  We devoured the berries later in the day, mixed with vanilla yogurt and granola.

September 8:  We had hoped to stay longer at Many Glacier, so that we could take the Iceberg Lake and Ptarmigan Tunnel hikes; but both of them were closed because of bear activity. So we reluctantly packed up and headed north across the US-Canadian border to an RV park west of Calgary, Alberta, for some much-needed grocery shopping, laundry, and battery-recharging (literally – the batteries were getting low after many days of "no hook up" camping).  After a recovery day, we headed west to Peter Lougheed Provincial Park, described in Part III.