(To enlarge a photo, just click on it; click "back" to get back. To watch a video again, click on the counterclockwise arrow in the lower-left corner.)

October 1: We drove from the Seattle area to Paradise Campground on the Mckenzie River, east of Eugene, Oregon. The campground, which was almost deserted, was aptly named – the forest was very lush, and the river ran right past our campsite: 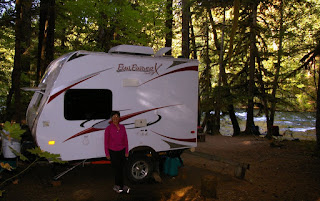 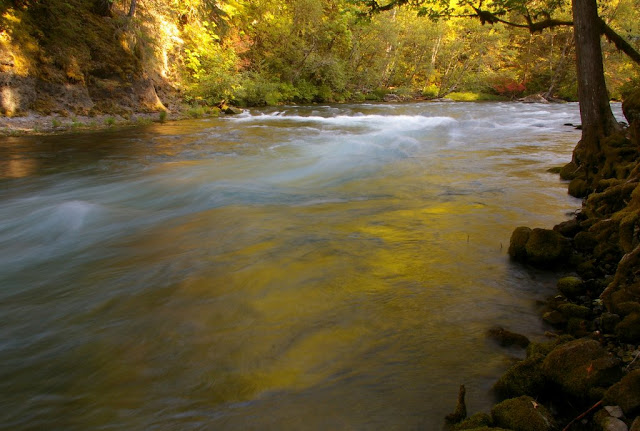 October 2: We rode on the McKenzie River trail, a singletrack route that winds along the riverbank through the forest. The river in this area is exceptionally beautiful, with sparkling blue water tumbling over black lava rocks:


Although I love mountain biking, I had a little trouble with some of the steeper sections of the trail (lots of rocks and roots) and fell over sideways while getting off my bike, tumbling down a mossy embankment. Except for a few scratches, I wasn't hurt, but I rode somewhat more cautiously the rest of the day. Despite the minor mishap, we still took the obligatory "lifted bike" shot: 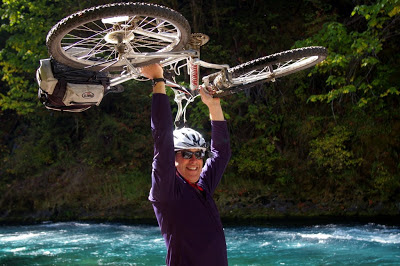 Later in the day, we drove up to Sahalie Falls: 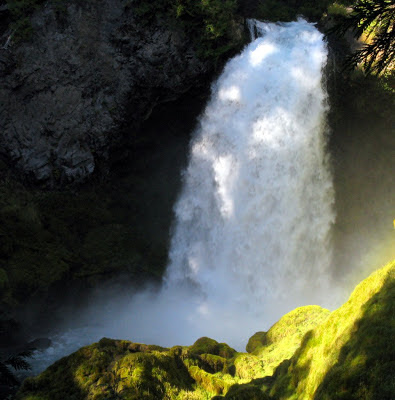 Koosah Falls, a few hundred yards down the trail, was framed by autumn foliage: 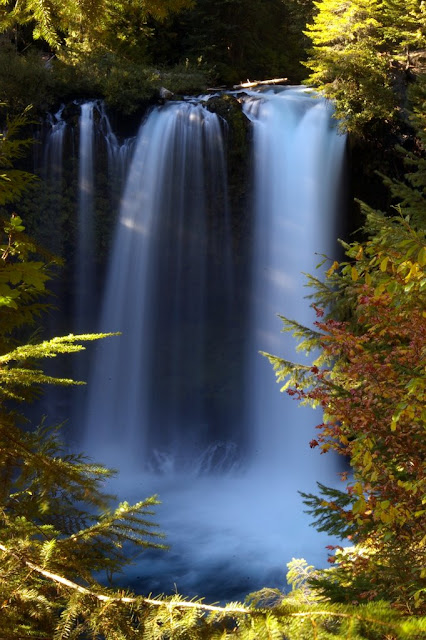 Late that afternoon, we set up our snack area between the trailer and the river: 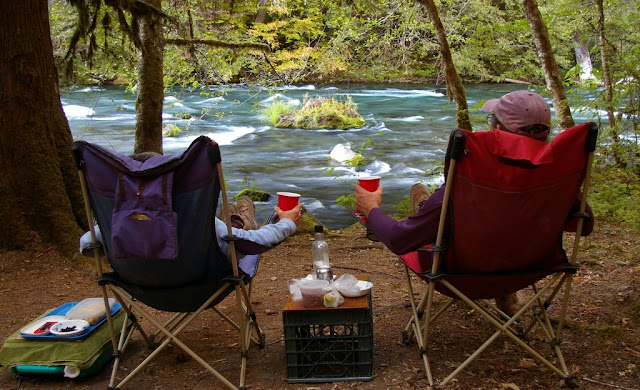 October 3: We left the Cascades and began our long trek to the south; we drove through Bend, to Klamath Falls, down through Susanville on Highway 139, and all the way to Milford on Highway 395. I had always wanted to see this area of northeastern California; it is as remote and empty as I thought it was, mostly high desert with a scattering of pines.  (I don't have a great need to visit this region again.)  The RV park in Milford was barely adequate.

October 4: We drove from Milford through Reno to Bishop Creek on Highway 395, a surprisingly-difficult trip because there was so much stop and go traffic through the area south of Reno. All along the Eastern Sierra, the aspens were at or near peak color -- this is at Conway Summit, just north of Mono Lake: 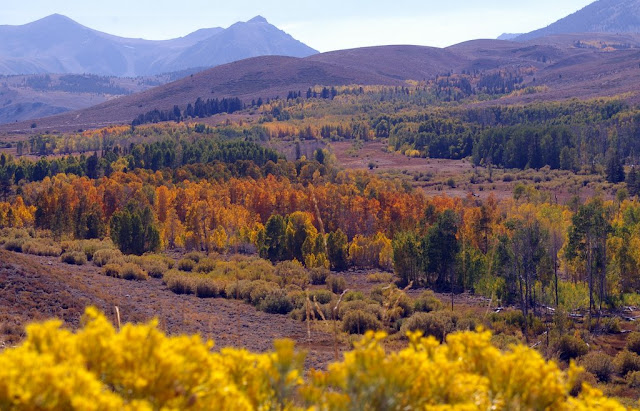 This is the same shot edited a year later with Lightroom -- more realistic: 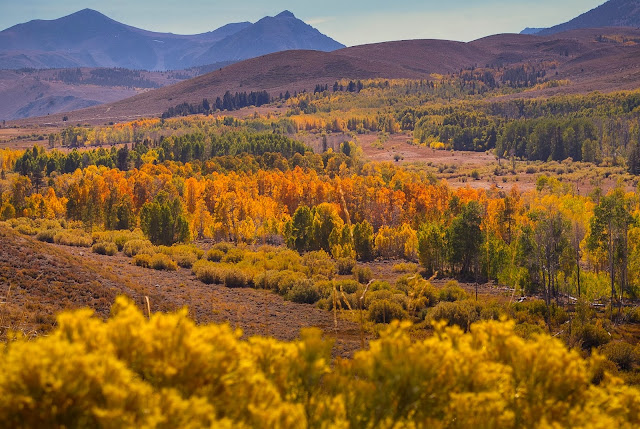 Late that afternoon, we pulled into a great campsite at Big Trees Campground, right on Bishop Creek. The campground was almost completely empty. This shot was taken from Highway 168, high above the campground; our trailer is the little white box on the right edge of the picture: 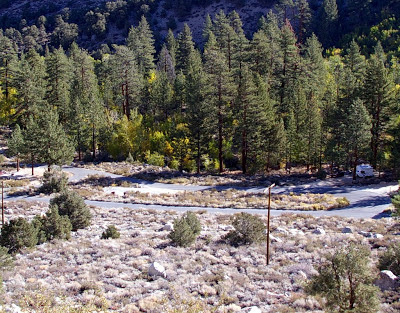 October 5: We hiked to the Lamarck Lakes basin in the North Lake area, roughly a 6 mile round trip with almost 2000 feet of elevation gain. The upper lake was very stark; it was surrounded by huge boulders that had fallen from the surrounding peaks. On our way back down, we stopped off at Grass Lake: 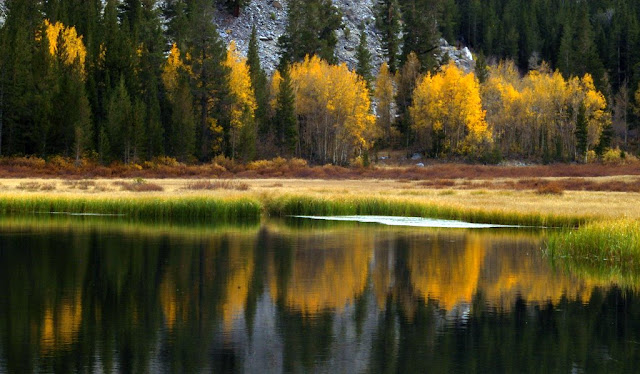 The aspens in the higher elevations (above 10,000 feet) were past the peak of color; fortunately, there was plenty of color (and even some orange, a rare treat) near Lake Sabrina: 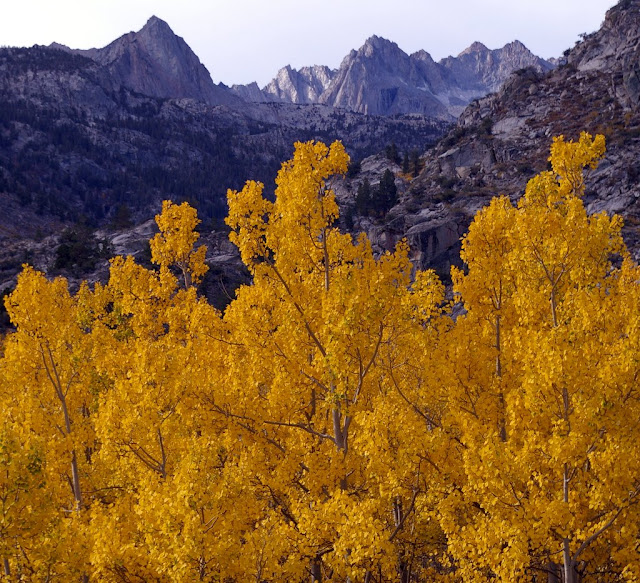 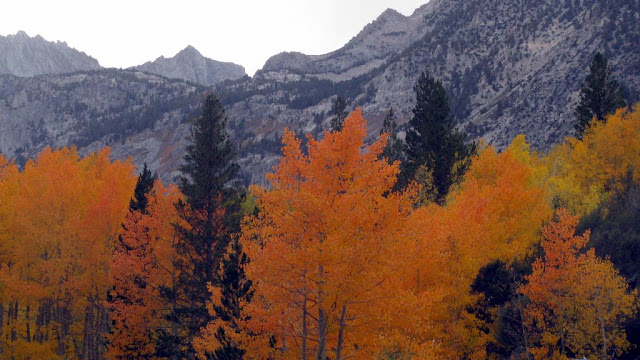 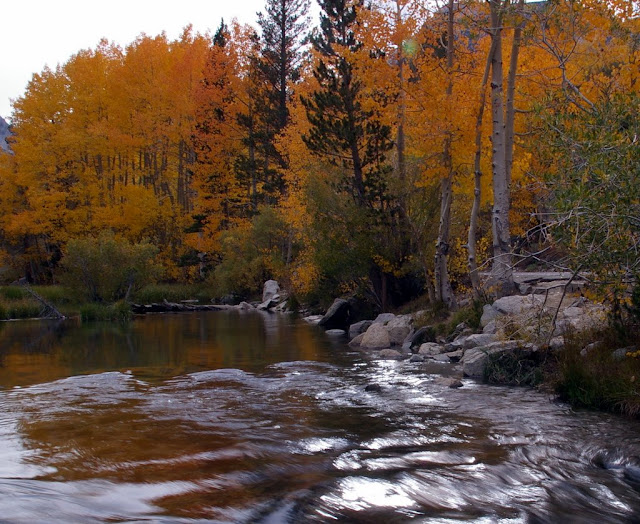 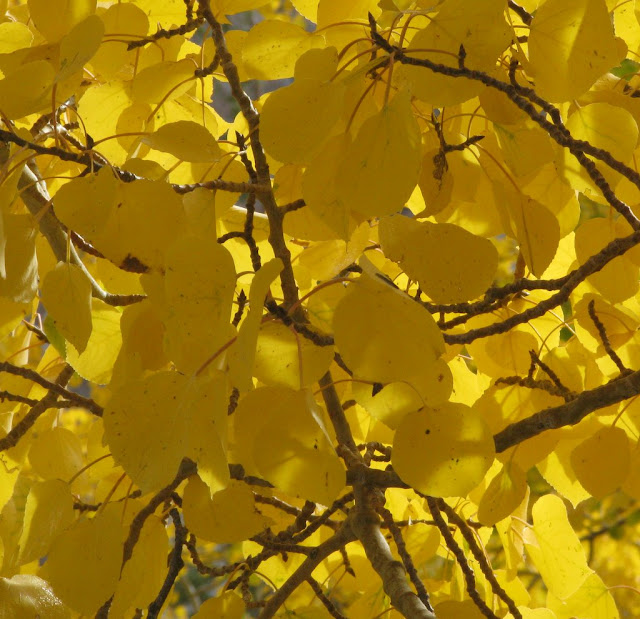 October 6: Since we had been hiking almost every day for six weeks, we were finally in good enough shape to attempt Bishop Pass, a strenuous 12 mile round trip with over 2000 feet of elevation gain, ending at about 12,000 feet. We had thought about trying to get to the pass on several earlier trips but had decided that it was too difficult.  This time, all of the stars magically aligned: the weather was great (not too hot, not too cold), the visibility was perfect, there was no snow on the trail, there were no bugs, and we were feeling reasonably strong.

We thought we were going to get an early start, but we got kidnapped by the aspens on the way up to the trail head at South Lake:

The trees were backlit by the morning sun, which was pretty, but it made photography a little bit tricky: 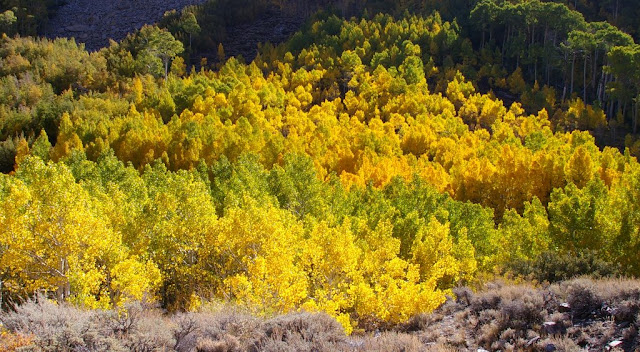 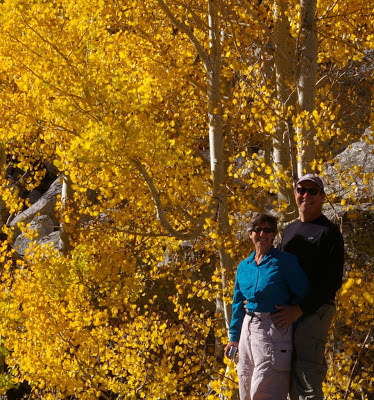 Up at Long Lake (at almost 10,800 feet), we were above the aspens, but the willows provided a little color: 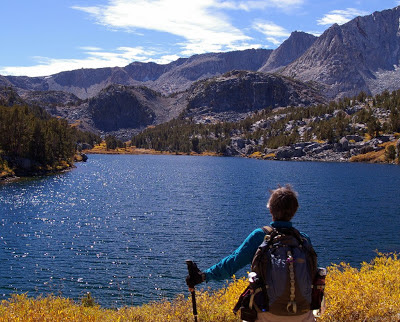 We stopped for lunch at the inlet to Timberline Tarns; every other time we had reached this point on the trail, the cascade had been covered by ice and snow: 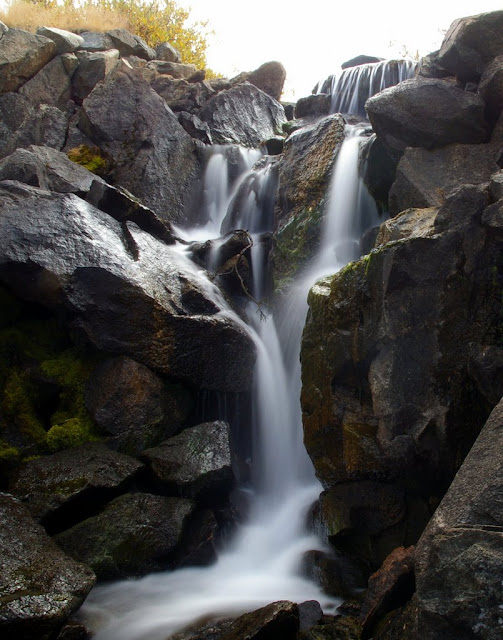 Past Bishop Lake, the approach to Bishop Pass was daunting -- a zig-zag of switchbacks carved into a chunky cliff.  But the trail was surprisingly well-engineered; the grade was not too steep, and there were rocks piled on the sides of the trail to reduce the feeling of exposure; Felice had no vertigo troubles on this route.  It took us more than an hour to make it to the top from Bishop Lake.  At 12,000 feet, this is (I think) the highest elevation we have reached so far: 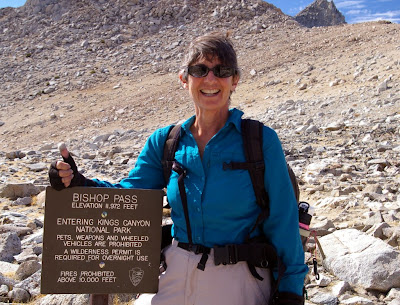 We then scrambled (carefully) up the slope behind Felice in the picture above and enjoyed a 360-degree panorama, from the Owens Valley over to the backcountry of Kings Canyon National Park.  Visibility (especially to the north) was very good; I am fairly sure we could see Mt. Patterson, north of Bridgeport, around a hundred miles away:

At 12,000 feet, the color of the sky becomes a deep blue, almost purple.  These are the 13,000 foot peaks of the Inconsolable Range, just to the north of Bishop Pass: 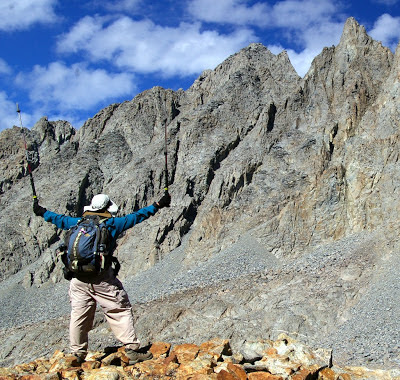 Back down near Saddlerock Lake, we could see the high point of our hike to the pass -- my pole is pointing to a distinctive shark-tooth rock formation a thousand feet above the lake: 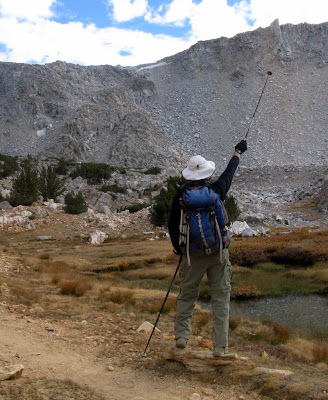 On our way down, we stopped off at a little cave by the side of the trail; on several earlier trips, we had used this cave as a lunch stop, sheltered from the rain and the wind: 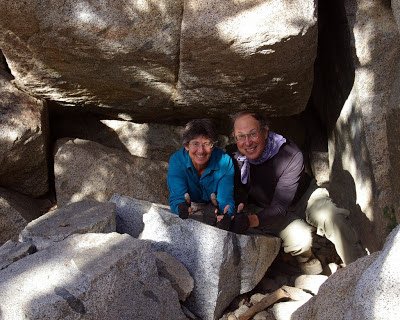 That evening, just as the sun was setting, we passed a brilliant grove of aspens -- this was taken with a long time exposure: 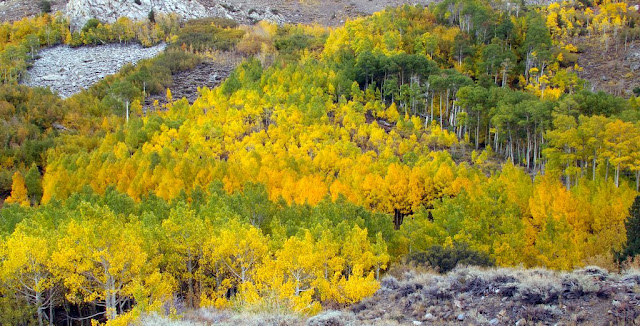 This is the same shot edited in Lightroom a year later -- more realistic: 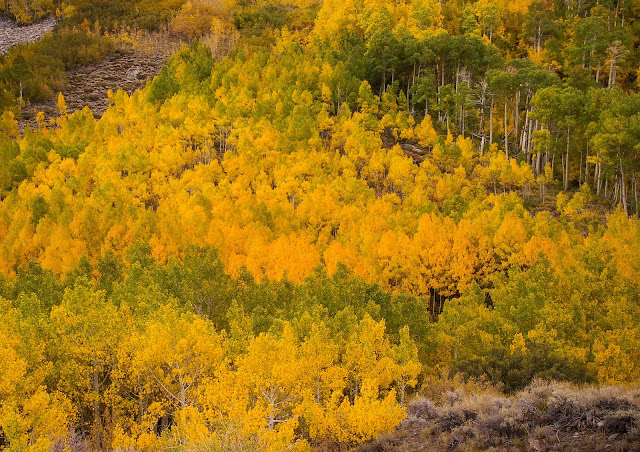 The yellow-orange leaves provided a frame for the creek: 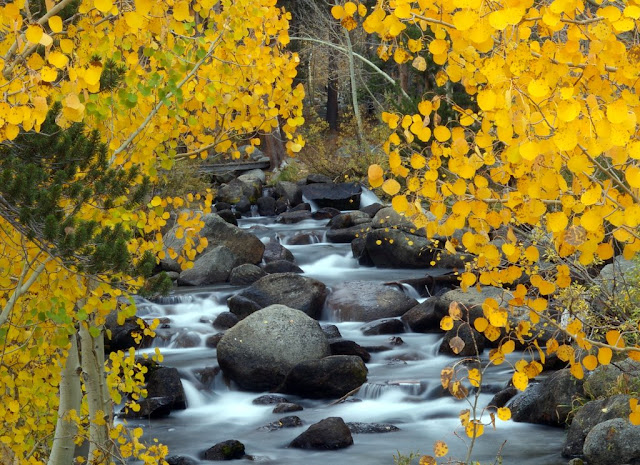 This is the same shot edited a year later in Lightroom -- more true to life: 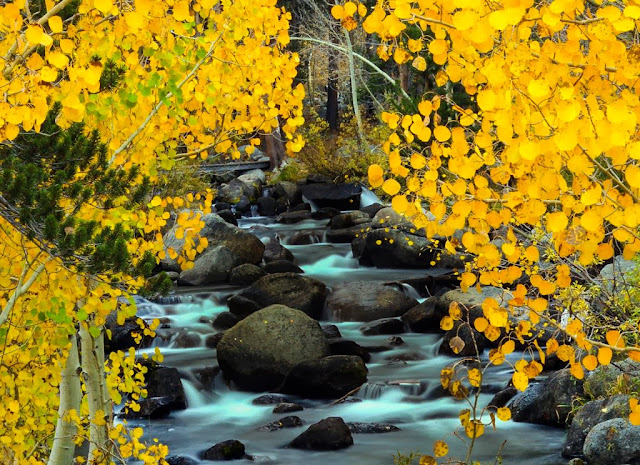 And on October 7, we drove home, after six full weeks in a tiny trailer.
Posted by Dan Schechter at 11:42 AM

Dan-- My mom and i love your picts. We are big fans of camping...we are headed to Paradise Campground in July..can you recommend some good sites on the river? It looks like you had a great spot.

You can't go wrong at Paradise -- just Google "map paradise campground Oregon" and the Willamette Natl Forest site will come up -- click on that, and there is a link to the map at the bottom of the page -- every single one of the riverside sites was great.