September 9:  We drove from Calgary to Peter Lougheed Provincial Park.  (For future reference, it would be fairly easy to drive straight to Peter Lougheed from Glacier National Park in a day, coming in from the south side of Highway 40, instead of coming through Calgary.)  We were hoping to get a campsite in Boulton Creek Campground because many of the sites have electricity; fortunately for us, that campground was full and we ended up in Lower Lake CG, right on the shore of Lower Kananaskis Lake, and it was virtually empty.  The campground was beautifully situated and well-maintained.  My only complaint is that the speed bumps were very high and steep and were not well-marked.  (Please don't ask me how I know this.)

After a quick lunch in the sunshine on the lakeshore, we decided that instead of setting up camp, we would take a quick bike ride on the lakeside trail to the Upper Lake.  As we rode back to the campsite, it started to get very cloudy.  We raced back to the trailer; just as we were getting back to the campsite, the rain started to come down fairly heavily. We set up camp in the rain, getting thoroughly soaked.  We ducked into the trailer just as a thunderstorm crashed over the lake.

The contrast was comical: it was absurdly luxurious to be on the shore of a lake in the Canadian Rockies, in a thunderstorm, taking a hot shower and getting into warm, dry clothing. The trailer was rocking in the cold wind sweeping off the lake; we were sitting at the dinette, enjoying our Zinfandel and our afternoon snack.

Suddenly, the storm passed and the sun came out.  Through the trees we could see that the mountains just across the lake had received a fresh dusting of snow -- this video provides a "before and after" view:

For a long time after the storm had passed, we stood on the beach by the lake, gawking at the snowy peaks and taking pictures, watching the scene change as the clouds came and went: 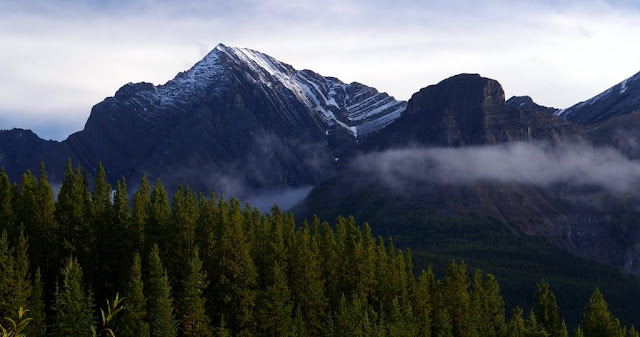 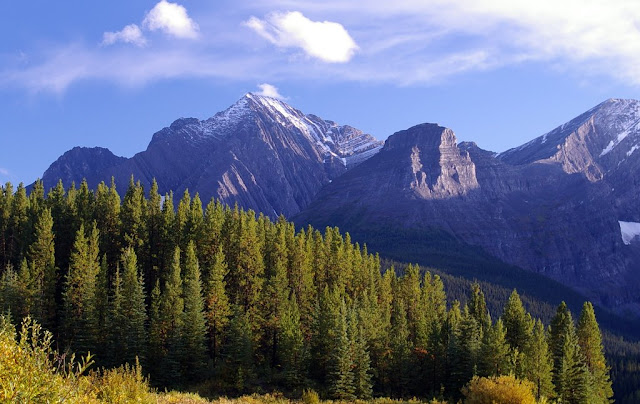 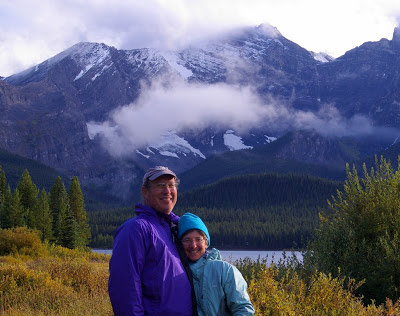 Late that evening, we spotted a couple of moose in a nearby meadow: 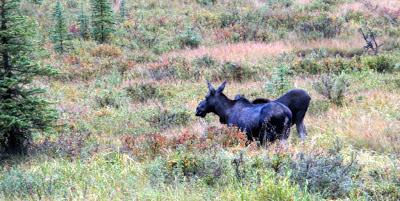 September 10:   We awoke to a drizzly day; nevertheless, we hiked up to Rawson Lake in the rain.  We were properly dressed, but it was a bit of a hassle to hike in our ponchos.  When we got up to the lake, it started to snow fairly hard -- the sun was peeking through the clouds and back-lighting the falling snow: 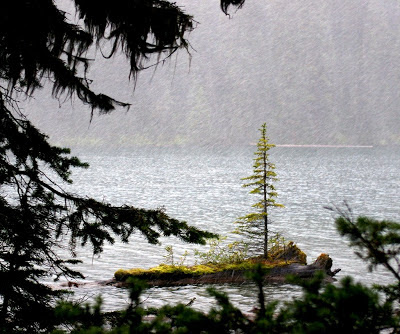 This is the same shot, edited in Lightroom -- it shows the wind-driven wet snow swirling over the lake: 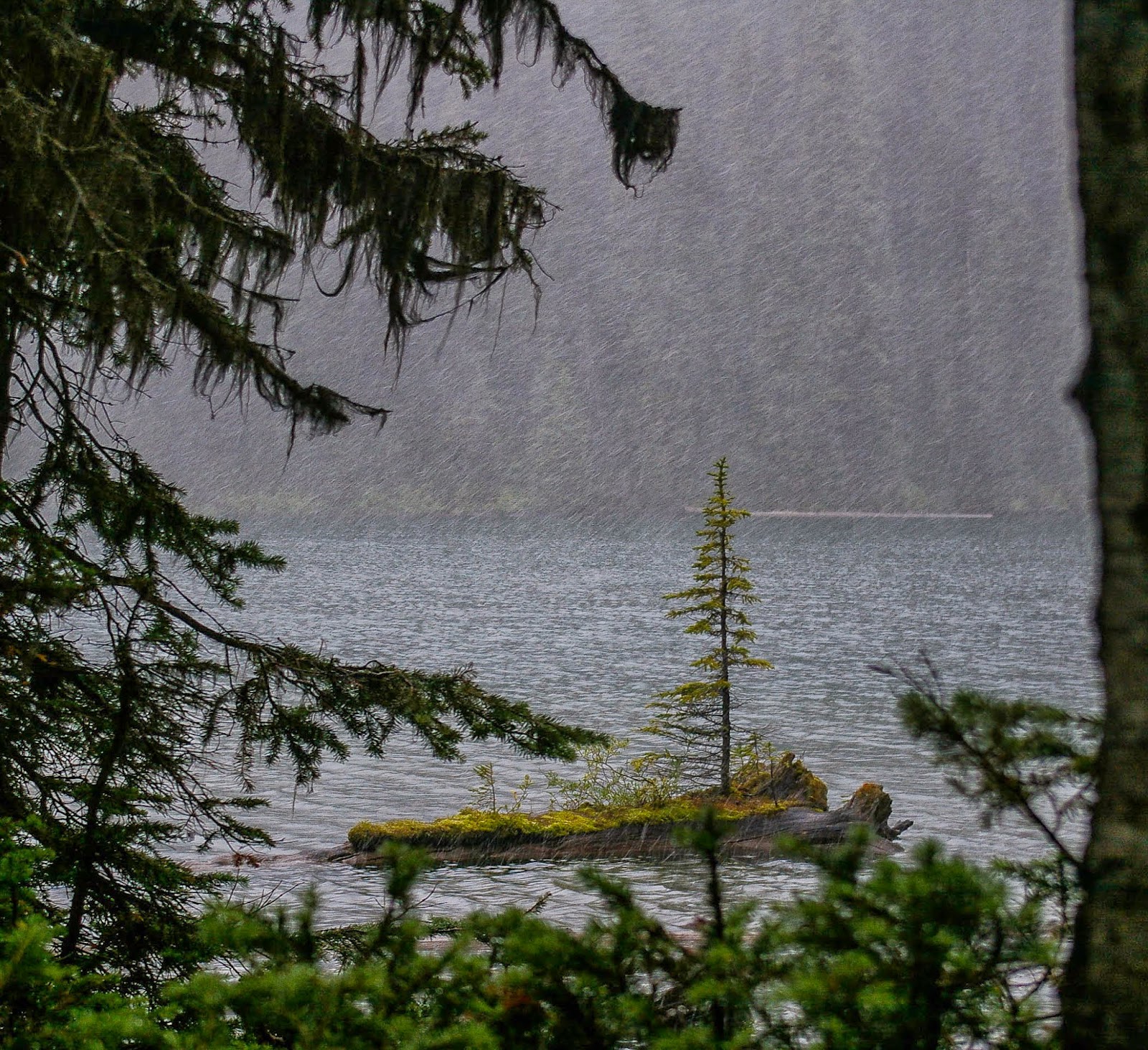 September 11: After a cold and drizzly night (comfortably ensconced under our heavy blankets!), we were forced out of bed early in the morning by the reflected sunrise over the Rockies across the lake, which had gotten another dusting of snow overnight.  The Rockies were to the west, and the sun was rising (obviously) in the east.  This is the first light of dawn: 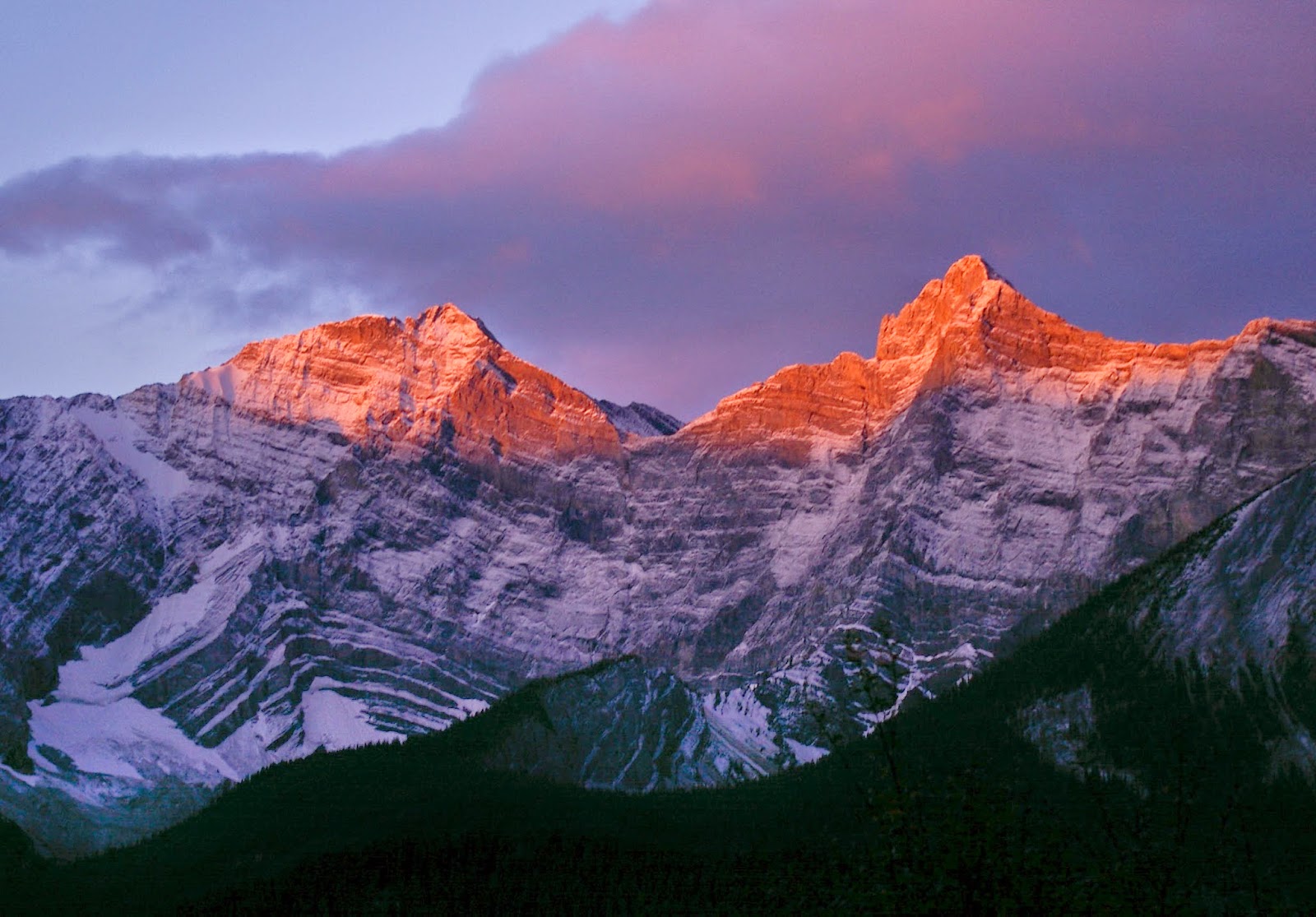 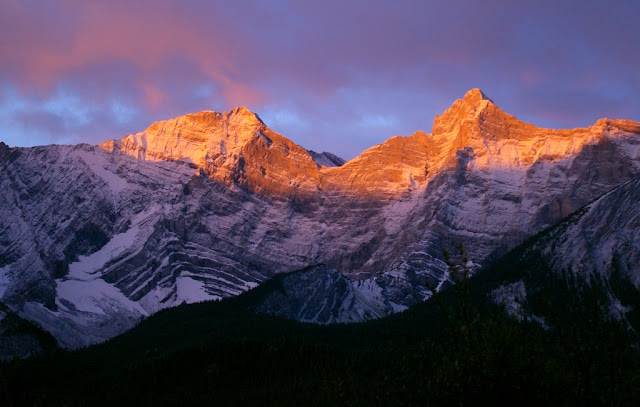 This is the same shot, edited more than a year later in Lightroom -- this is much closer to the real thing: 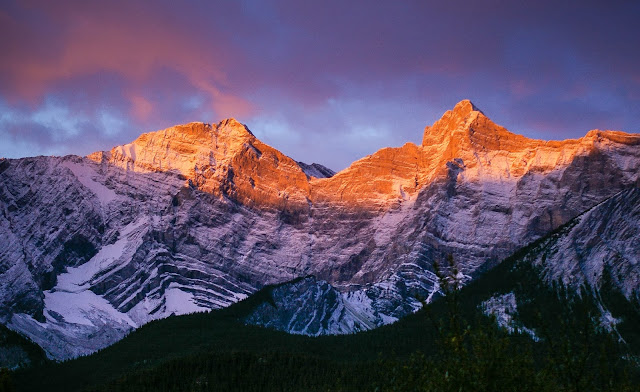 This video provides a panorama of the sunrise:


The whole scene was so vivid (and the trailer was so close to the lakeshore) that the mountains were reflected on the side of the trailer: 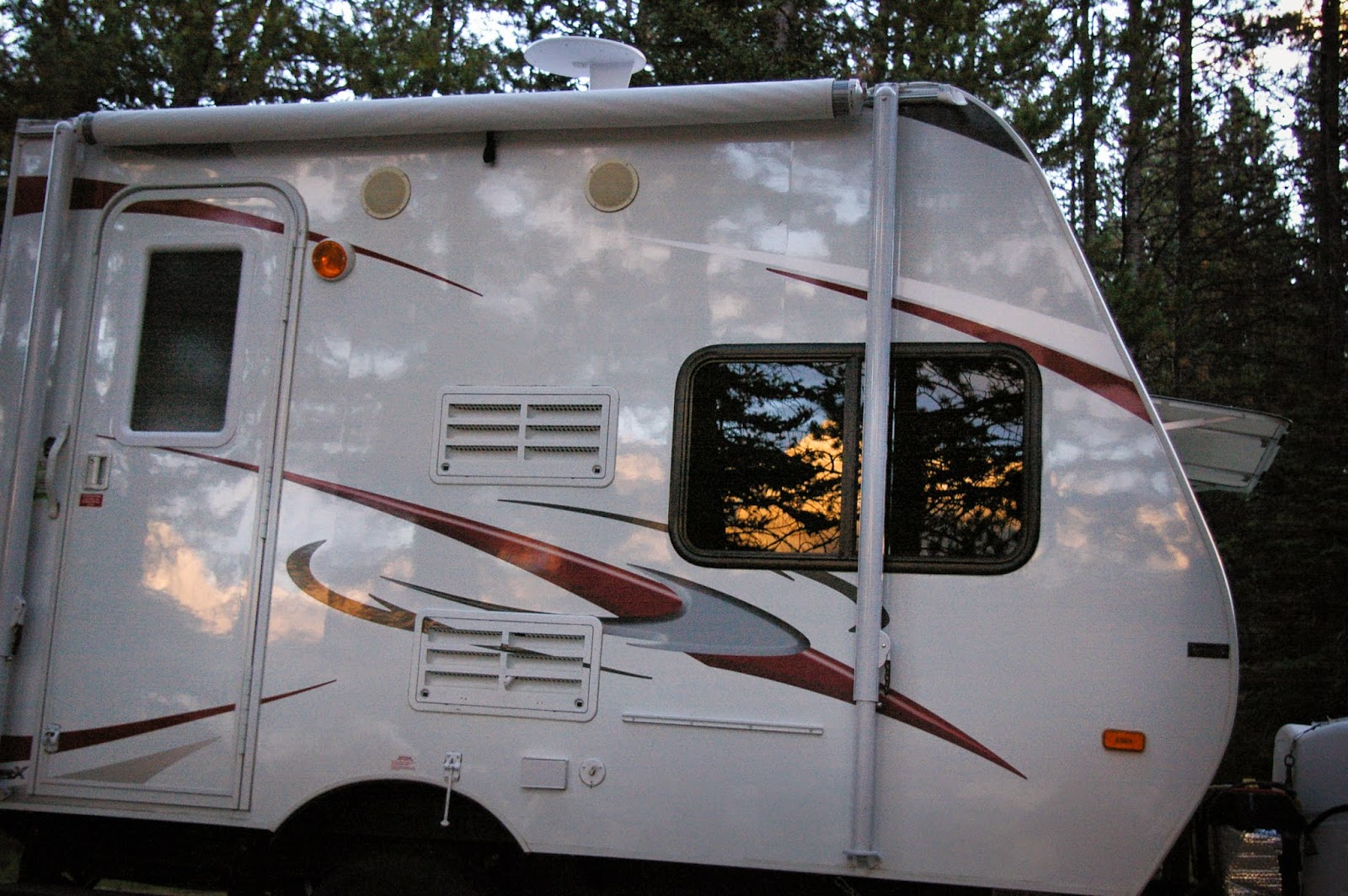 Later that morning, we drove up to Highwood Pass, to hike Ptarmigan Cirque.  Near the crest, we saw this amazingly crumpled mountain, folded at a 90 degree angle in the middle.  In the middle of the saddle, the layers that would have formed the arch of the fold have been eroded away -- I think this type of formation is called an anticline:

It was still snowing lightly when we got to Highwood Pass: 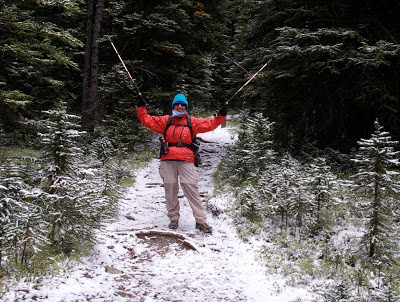 The route took us up above the treeline, past an icefield, into a heavily glaciated area; we followed a spur trail high up the mountain slope: 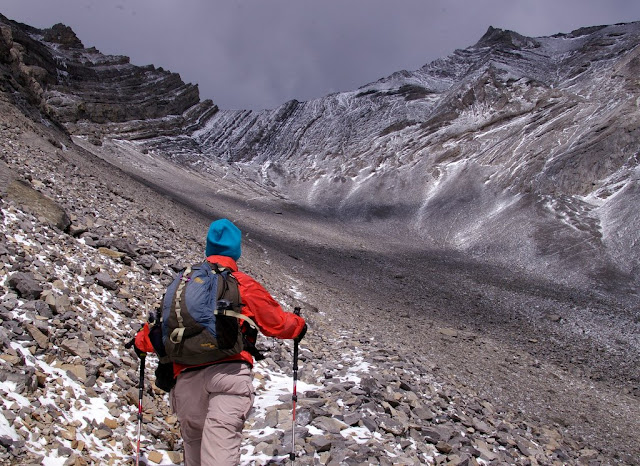 We were right at the edge of the rain shadow of the mountains: the snow flurries were blowing in on us from the west and north, while the sun was shining on us from the south. It was cold, windy, and exhilarating to be up in this alpine environment, especially since the trailhead was at about 7500 feet.   Usually, it would have taken us many hours of slow climbing to get up to that elevation.

Down in the cirque below us, there were chaotic mounds of moraine and a remnant icefield: 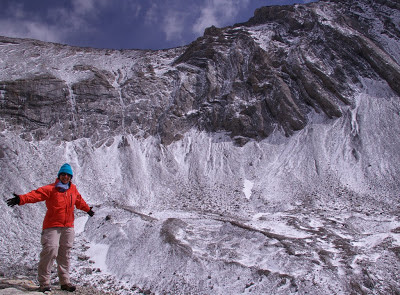 That afternoon, we drove down to the Kananaskis Resort and took a bike ride along the trail through the valley. The ride trended gently uphill for several miles, through the forest. On the way back, we could see a rainstorm behind us, and we raced it back to the car.  Just as we finished loading the bikes, the storm hit. 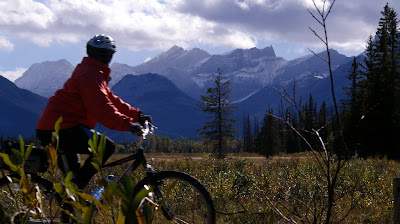 September 12:  We were again forced out of our warm bed by another cold and brilliant sunrise over the snowy peaks: 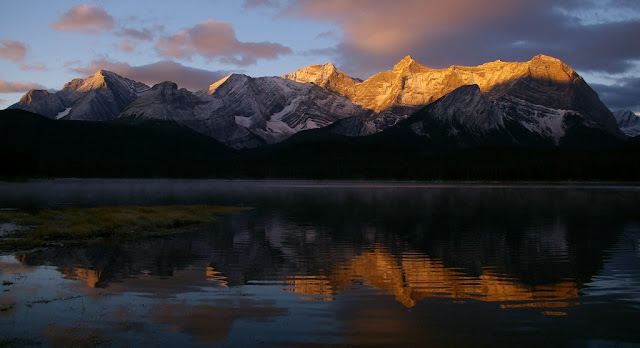 This is the same shot, edited more than a year later in Lightroom -- this is much closer to how it really looked, including the mist on the lake and the snowy strata in the mountains: 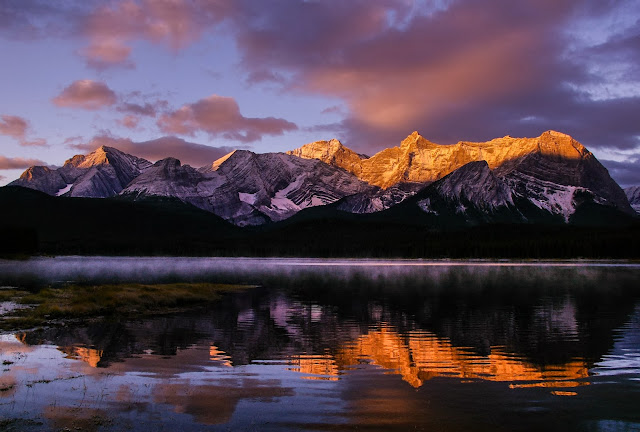 Later that morning, we took a pleasant hike around the north shore of Upper Kananaskis Lake to the lower falls; this is the view that greeted us upon our return to the campsite: 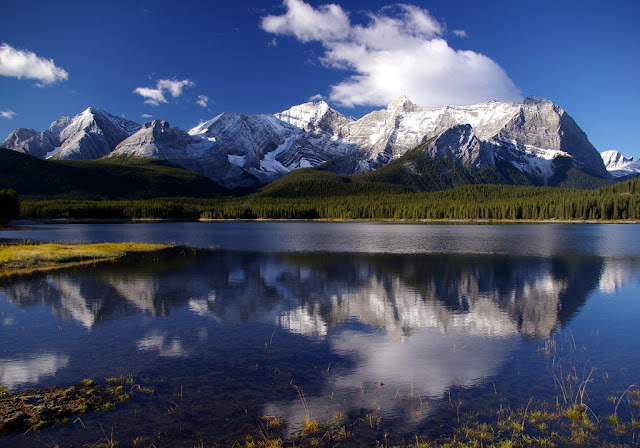 This is the same shot, edited later in Lightroom: 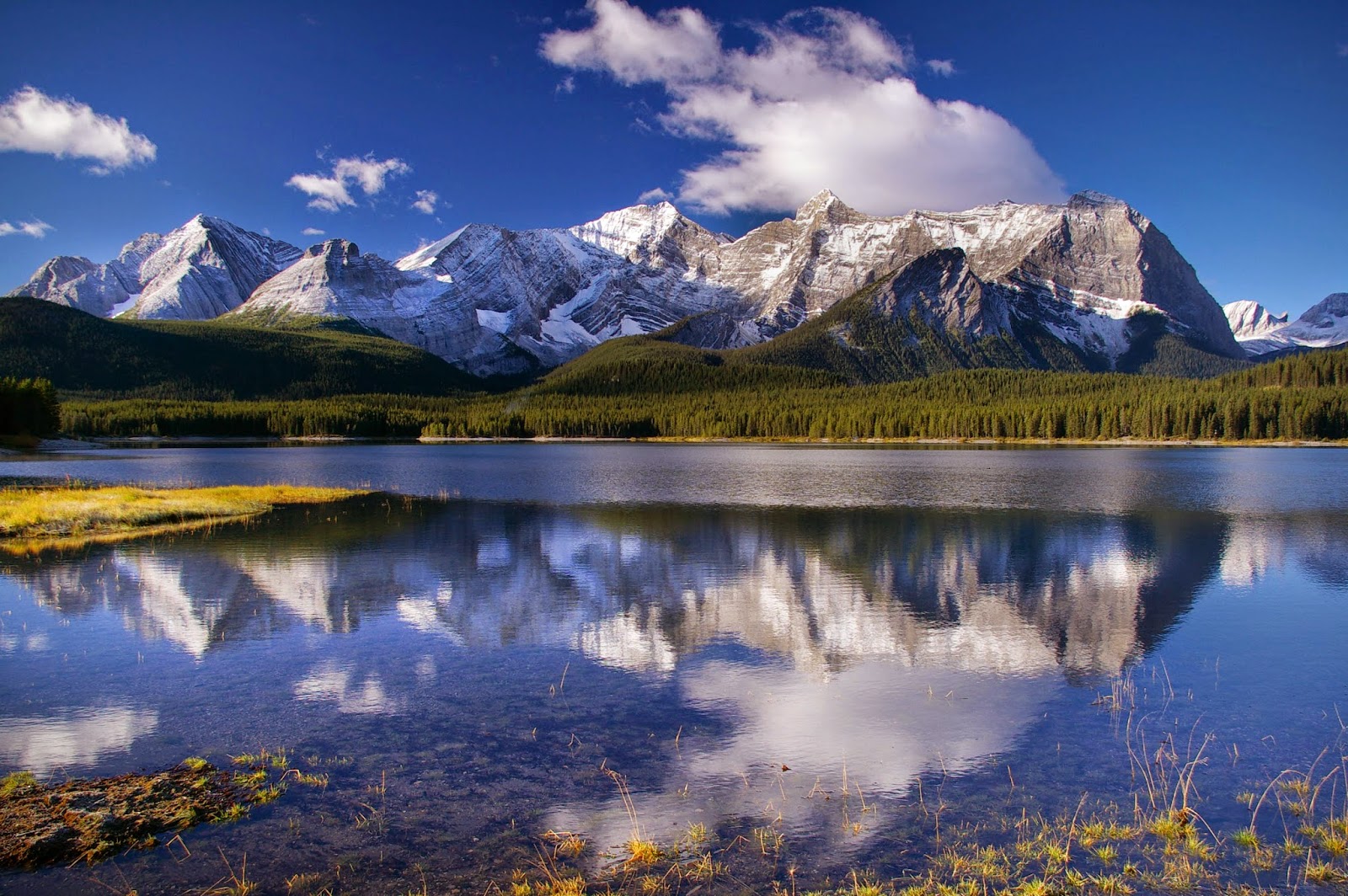 We just had to take one more panorama from the campsite before leaving for Banff:

We agreed that Peter Lougheed would be worth a much longer visit, someday.  It is "only" a provincial park; in any other setting, it would be a major national park.  But we wanted to head north; so we reluctantly pulled up stakes and drove to Tunnel Mountain Campground in Banff National Park, described in Part IV.
Posted by Dan Schechter at 10:10 PM

Glad you enjoyed your trip, we were at Boulton Creek the weekend after you were there.

Another great campground in Peter Lougheed Provincial Park is "Interlakes". It is less than 5 minutes past Lower Lakes/Boulton Creek and also has sites that are "walk out your door into the lake". You can't reserve Interlakes, it is first come first served.

For anyone else reading this, you can reserve sites at Boulton Creek via reserve.albertaparks.ca