September 13:  Tunnel Mountain Campground in Banff was nothing special -- just a slightly run-down RV park with indifferent landscaping, located within earshot of the railroad.  But it had full hookups and was conveniently located, so that we could recharge the batteries and shop for groceries.  After many days in remote locations, we found that Banff itself was a bit of a shock -- wall-to-wall gift shops and so forth.

During the late morning and the early afternoon, we rode our bikes along the Bow Valley Parkway.  The road was lightly traveled, the shoulders were wide, and the views were stunning: 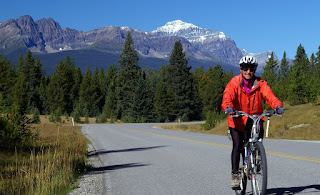 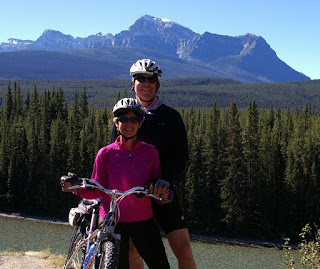 At one point along the parkway, we noticed a car stopped in the roadway ahead of us. We rode up to the car – the passengers pointed to the bushes alongside the road, near us. There was a large grizzly bear, calmly grazing just on the other side of the trees, probably 20 or 30 yards from us: 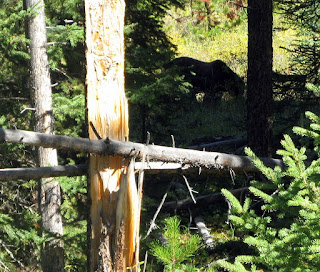 We suddenly realized that although the folks in the car were well-protected, our bicycles provided no protection at all.  Thankfully, the bear was completely uninterested in us.  Later that afternoon, we hiked in Johnston Canyon: 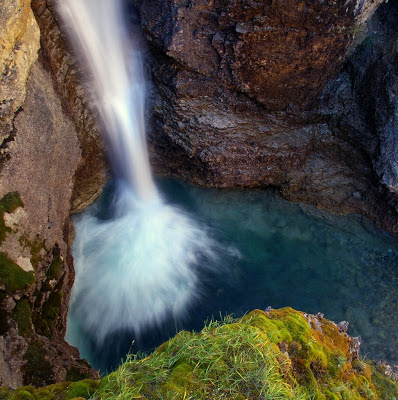 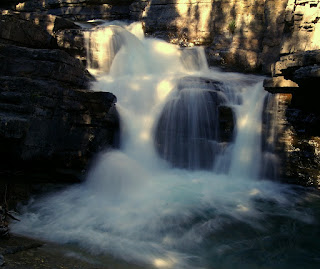 September 14:  We left Banff and pushed northward up the Icefields Parkway to Wilcox Creek Campground, at 6600 feet, overlooking the Columbia Icefield.  The drive was spectacular: 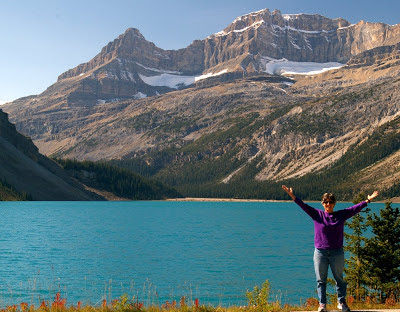 When we arrived, the campground was mostly empty (although more campers arrived later in the afternoon).  We found a campsite with an excellent view of Mt. Athabasca: 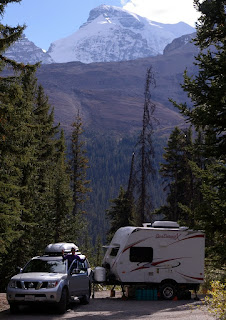 This was taken from inside the trailer, looking out of the kitchen window -- I always try to position the trailer so that there is a good view from Felice's seat at the dinette: 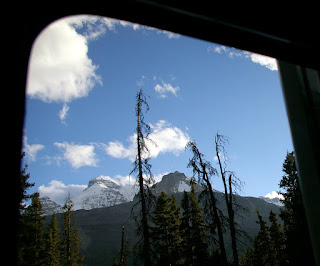 And, of course, we soon set up our snack area to take advantage of the view: 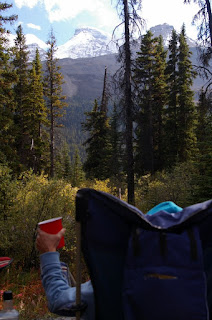 Just to the west of the campground, out of the forest, we could see the entire crest of the mountain: 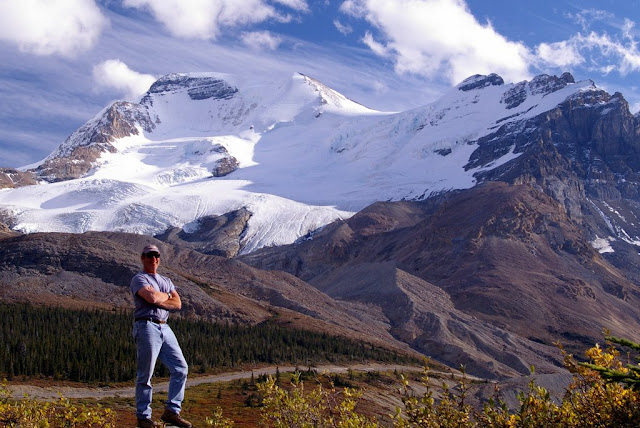 That night, we drove down to the toe of the glacier, not far away, to look at the stars.  They seemed strange to me -- everything was out of place because we were at such a high latitude.  The Big Dipper and the North Star were high in the sky, rather than low on the horizon.

Late that night, in our cold, silent, and dark trailer, Felice heard a tiny chewing noise. I hopped out of bed, grabbed a flashlight, and yanked open the cupboard. On top of the ramen noodles sat a tiny field mouse, innocently chewing away.  It scurried away and then peeked out again, with just the tip of its pink nose showing. Although I was not happy about having a mouse in the trailer, I told Felice that was the most adorable Disney mouse I'd ever seen.  It was to become much less adorable over time.

September 15:   Perhaps because of the interruption by the mouse or because the trailer was so quiet and dark and cold, we slept until 8:30, an unprecedented event.  We hiked up to Wilcox Pass, a broad plateau of rolling hills high above the glaciers across the valley.  As we climbed, we could see the icefield spreading out below us: 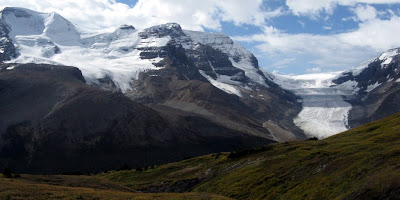 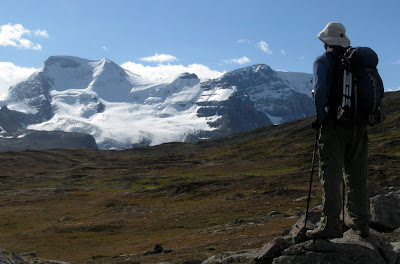 Feeling adventurous, we went off-trail and hiked to the edge of the cliff facing the ice fields and then climbed up the shoulder of Wilcox Peak.  We reached an elevation of over 8300 feet: 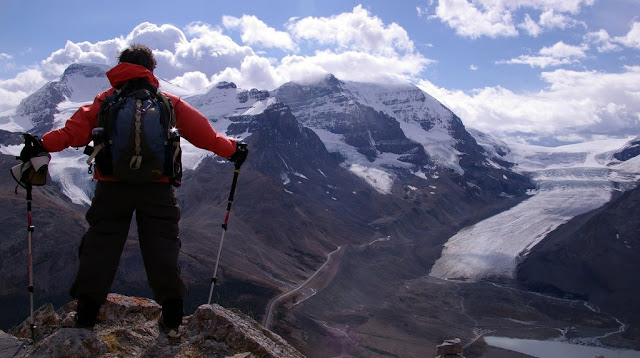 This is the same shot, edited later in Lightroom -- the colors are more accurate: 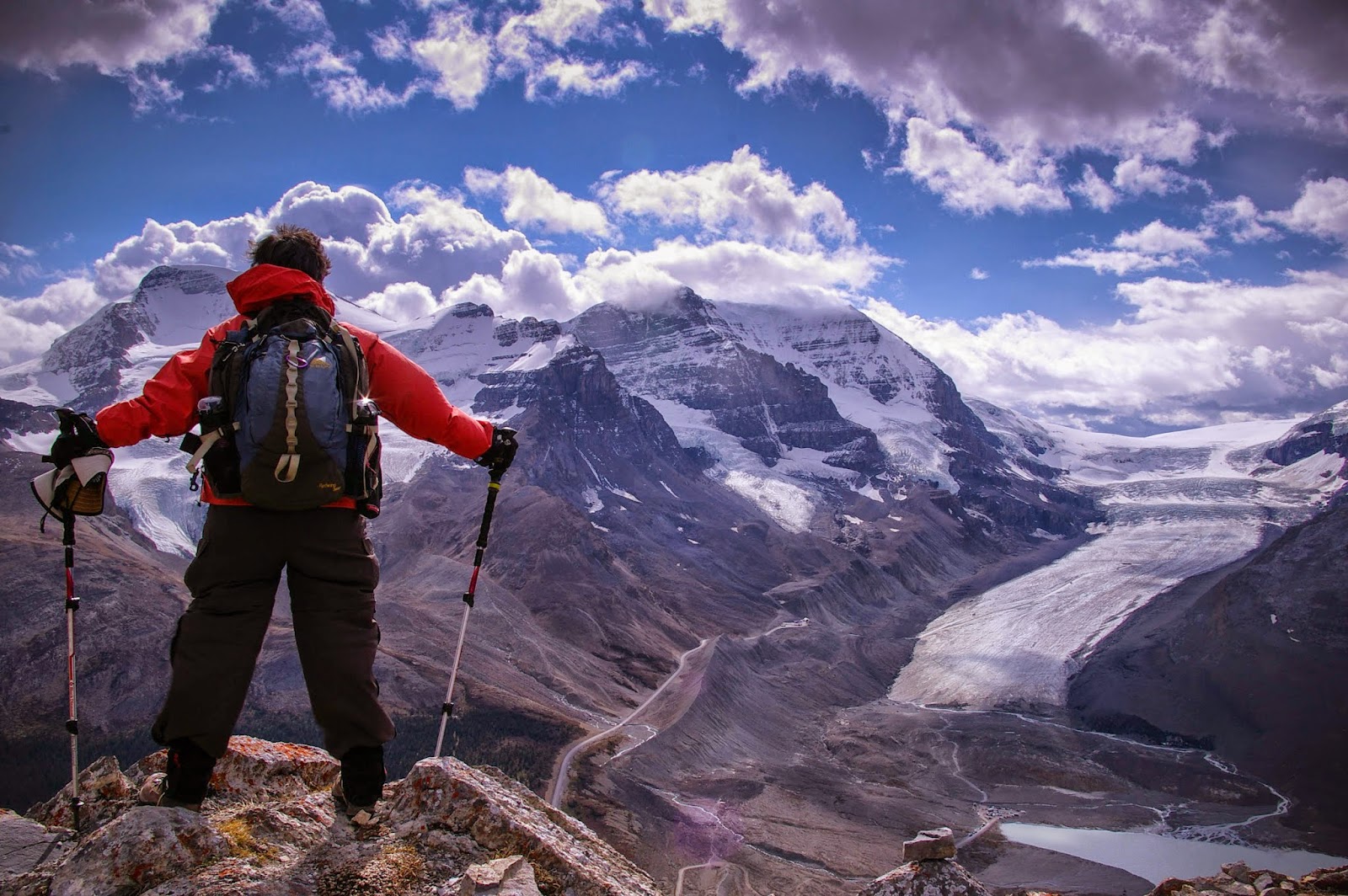 This video gives some idea of the wind blasting off the icefield and over the cliff:

Throughout the broad plateau of the Wilcox Pass area, there were herds of bighorn sheep grazing among the rocks.  A mother and her baby posed for us on an outcropping: 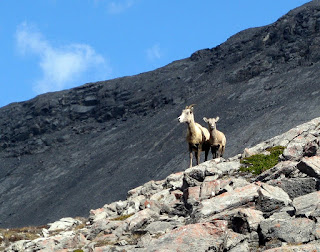 They then ran down a gully to join the rest of the herd: 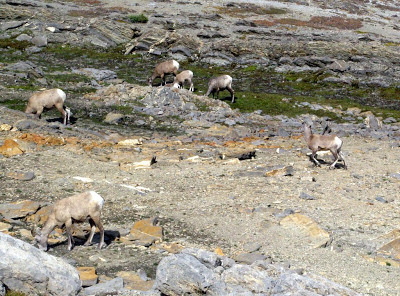 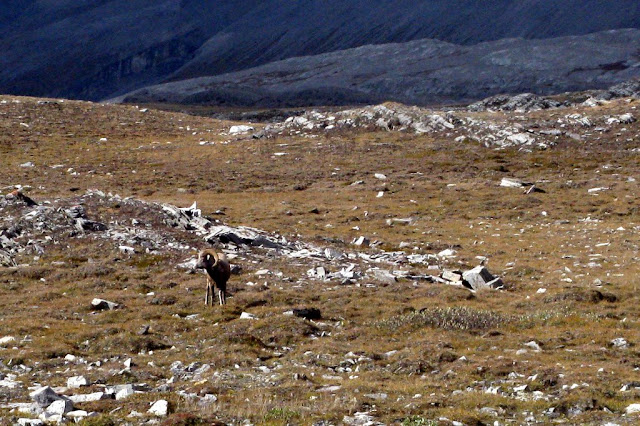 Throughout the afternoon, there were rain squalls and snow flurries, but nothing terribly serious – looking south down the parkway, we could see some heavier thunderstorms: 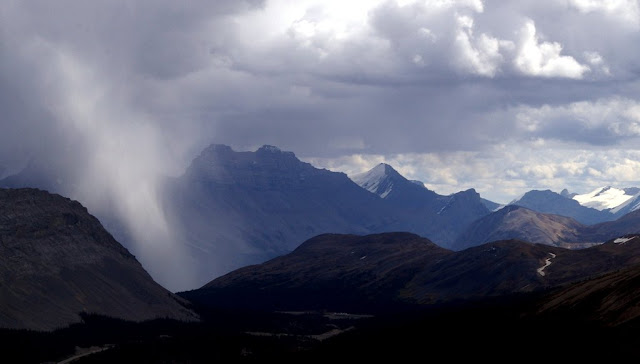 One of the most amazing things about the Wilcox Pass area was that it was so open and treeless, giving us a lot of freedom to explore off-trail: 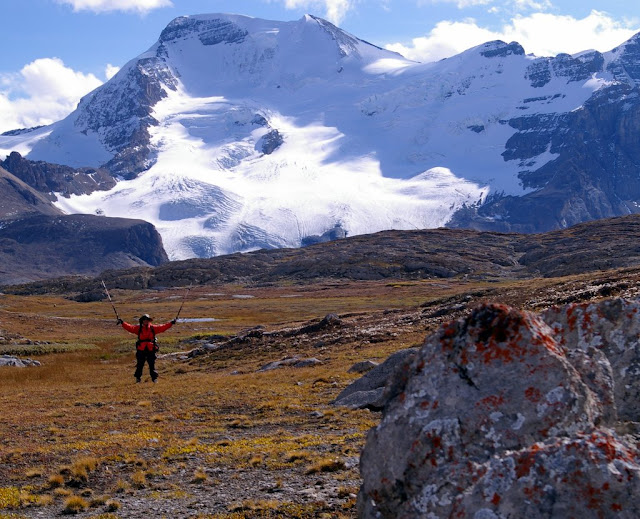 The whole area consisted of sedimentary layers that had first been tilted from horizontal to vertical and then were later shaved off by the glaciers; the exposed edges of the layers formed a bumpy plateau:

September 16:  In the morning, we packed up and left our campsite, towing the trailer just a mile to the Toe of the Glacier trailhead, located (not surprisingly) at the toe of the Athabasca Glacier.  We climbed carefully onto the ice, staying far away from any crevasses.  The ice was not slippery because it was full of gravel: 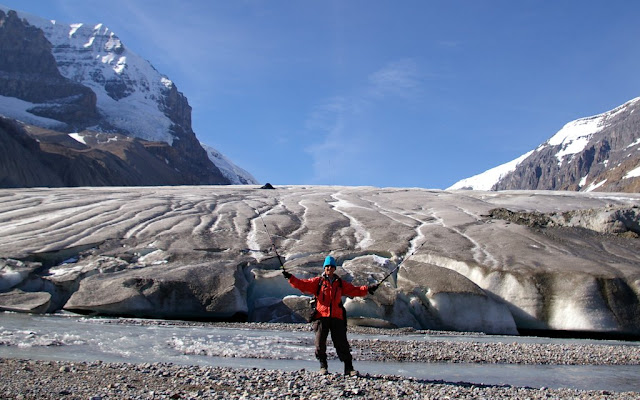 We were fascinated by the striated rock that had so recently been exposed after the glacier had retreated.  We've seen glacially-scored rock many times, throughout the Sierra and other mountain ranges; but the scratches are usually relics of the Ice Ages, dulled by time.  Here, these rocks had been scraped within the last few years; as recently as 2000, this entire area was buried under tons of moving ice.  In this picture, Felice is holding a fragment of striated rock, next to a flattened monolith: 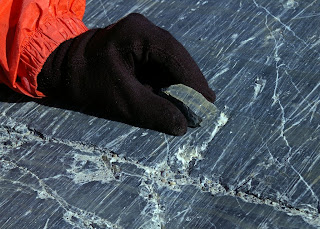 I then took a picture of that same bare monolith (in the foreground), looking back toward the glacier, showing that the rock had just emerged from the toe of the glacier during the last few years: 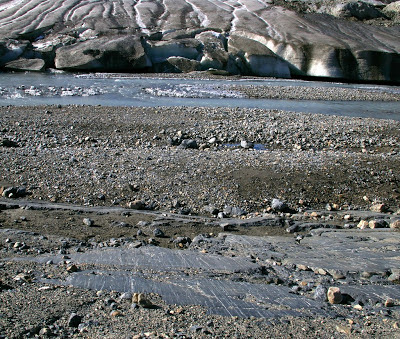 The Canadian park service had put up markers showing the speed of the glacier's retreat; here, Felice is at the "year 2000" marker: 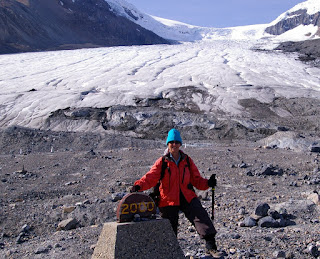 We then headed north up the Icefields Parkway toward Jasper, stopping off at Sunwapta Falls: 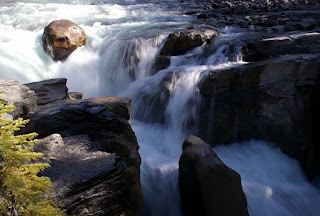 A little later, we stopped at Athabasca Falls, which had carved a slot canyon: 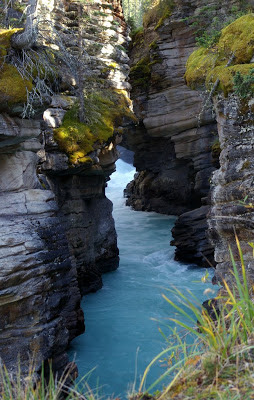 That evening, we had no trouble finding a "no hookup" campsite at Whistlers Campground in Jasper, although the "full hookup" campsites were surprisingly busy.  As at Tunnel Mountain in Banff, this campground was not wonderful -- no views of the mountains, a fair amount of train noise, rather scraggly landscaping, and facilities in need of maintenance.  But it was the only campground open in the area during September, and it was conveniently located, and "boondocking" (camping outside a campground) is not permitted in the national parks.

September 17:  We hiked up from the bottom of Maligne Canyon, starting at the "Sixth Bridge" trailhead, instead of starting at the top.  We were glad we did; we had the trail all to ourselves, and the river was booming past us as we headed upriver toward the slot canyon portion of the trail.  Some of the trees along the riverbank had begun to change: 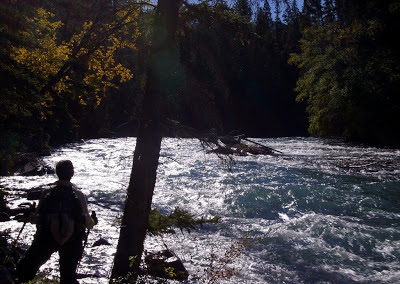 The rapids were violent but lovely, creating elaborate patterns of standing waves: 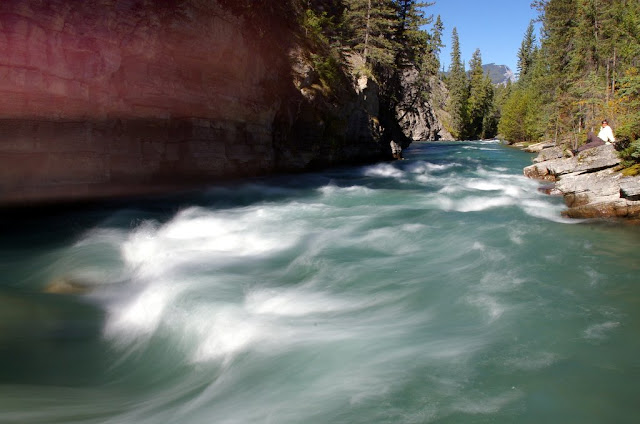 After a few miles, we reached the upper canyon, the area most popular with non-hiking tourists.  There were several very graceful waterfalls: 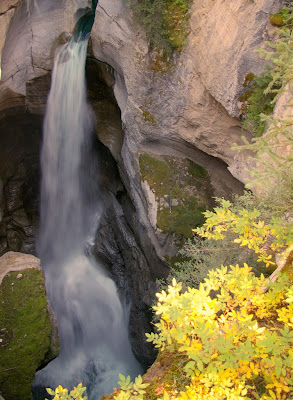 Later that afternoon, as we drove back to Jasper, we spotted some elk on a sandbar in the Athabasca River: 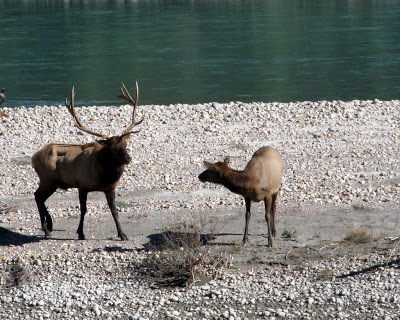 And late that evening, not far from the campground, we ran across another bull elk: 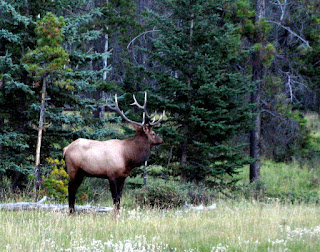 Although we had enjoyed Jasper, we decided that the mountains lacked the scenic punch of the southern end of the Icefields Parkway:  since Jasper is at a lower elevation, there was little or no snow, and many fewer glaciers.  (I think we had gotten a little spoiled by the grandeur of the Columbia Icefields area!)  So we left the next morning for Lake Louise, described in Part V.

Posted by Dan Schechter at 8:57 AM