For our 31st anniversary, we took a five-day trip up to the Big Meadows area in the Sequoia National Forest, between Kings Canyon and Sequoia National Parks. We scored a prime "boondocking"" campsite off of one of the forest roads, on a big open granite dome with terrific views of the Great Western Divide. (Remember to click on the pictures to enlarge and click "back" to get back to the blog.) During the summer, we usually look for more shade; but in late May and early June, we figured that the absence of shade wouldn't be a problem. (As it turned out, the problem was that we were exposed to lightning on this big dome!) 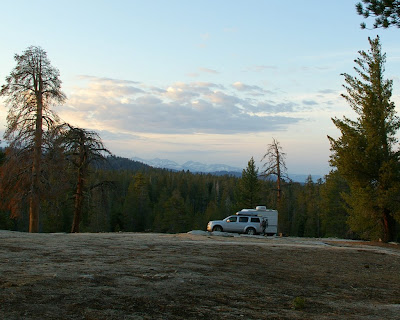 After setting up our campsite, we took a hike in Evans Grove, north of Buck Rock. This grove is hard to reach because the dirt roads are so rough; as a result, there was nobody else there, and it was very peaceful: 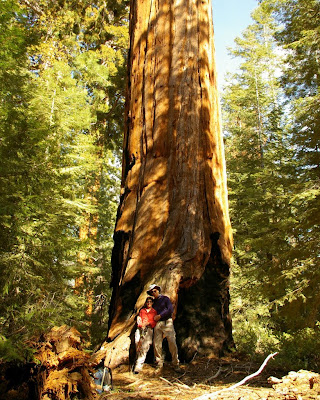 At the bottom of the grove, we took a loop trail that led us down to an old logging road or narrow-gauge railroad grade. (We could tell it was an old road because we could see the remains of carefully-built rock walls.) As you will see below, we later ended up revisiting that road from a completely different direction. After we got back to the trailer that evening, we could see a thunderstorm boil up across a ridge, coming right toward us: 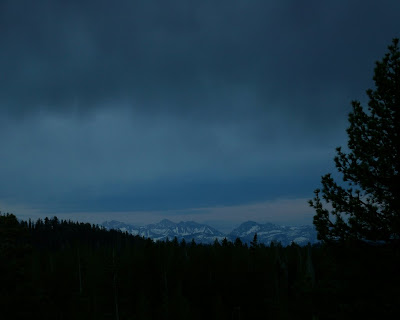 It rained pretty hard that evening. (It is very pleasant to be inside a small tin box in a rainstorm at night.) The next day, we drove all the way down to the end of Highway 180 in King's Canyon and hiked to Mist Falls, a 9 mile round trip. During the hike, we came across two rattlers. The first one (below) was calmly crossing the trail. The second one was coiled on a rock pile, rattling loudly and poised to strike; I didn't stop to get a picture of that one. 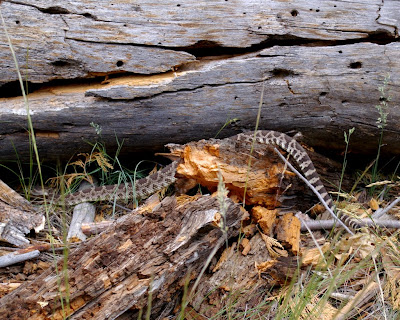 The trail followed the Kings River. Because the snow in the higher elevations was melting fast, the river was roaring: 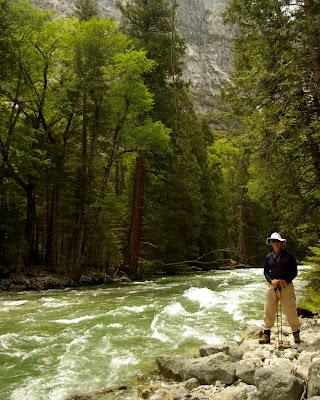 Mist Falls was thunderous. In fact, it was so violent that we couldn't get a picture of the entire cascade; there was so much mist in the air that the camera would've been soaked. We sat for a long time on a big granite slab next to the river. The slab was vibrating with the force of the falls. 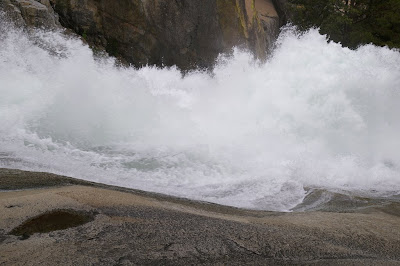 That afternoon and evening, it rained again, with plenty of thunder and lightning. Amazingly, with all of this rough weather, we never got wet while hiking -- it seemed to hold off until we got into the car or into the trailer. The next morning, there was a fairly brisk hailstorm: 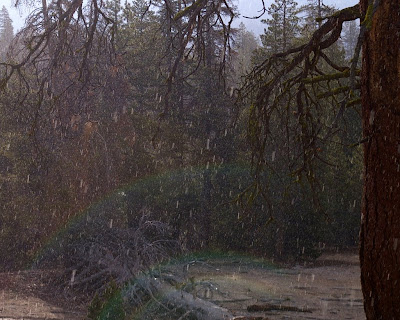 After the sun came out, we were treated to a double rainbow: 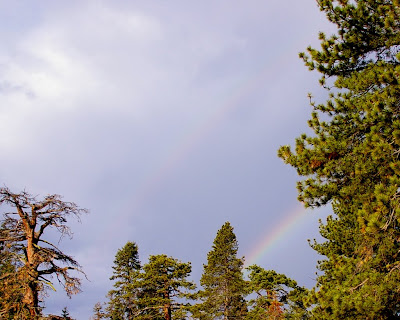 A little later, we headed out for a bike ride. In a campground along Tenmile Road, we found these snow flowers bursting through an asphalt walkway -- apparently these flowers aren't as fragile as they look: 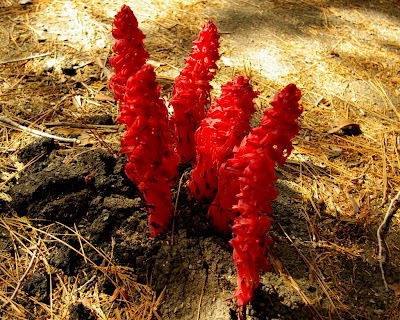 This bike ride was one of the greatest routes we've ever taken. It stretched the entire length of Forest Road 13S05, starting near Hume Lake. The road generally followed the ridge line south of King's Canyon between six and seven thousand feet, giving us terrific views of the mountains north of the canyon: 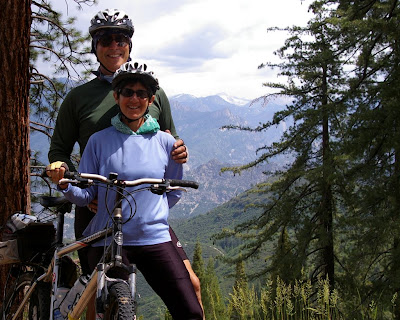 After a few miles, the road came to the Lockwood Grove. In all of our earlier visits to the various Sequoia groves, I don't think we've ever been able to ride our mountain bikes right through the big trees. Here you can see how the grove marches down the hillside: 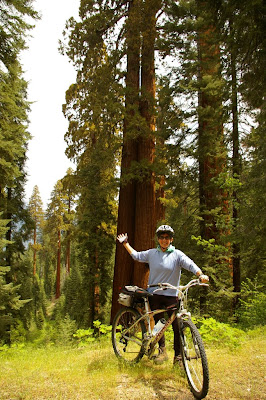 In places, the dirt road was fairly smooth; in other places, it was so rocky that we had to get off our bikes and carry them across the boulders, especially where the mountainside had tumbled down on to the roadway. Every so often, we came across another group of Sequoia trees. 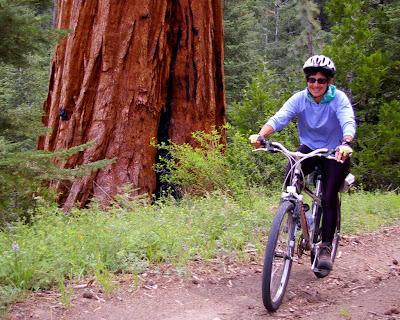 All day long, it kept threatening to rain on us, but it never really did. But we saw plenty of lightning in the mountains across the canyon. 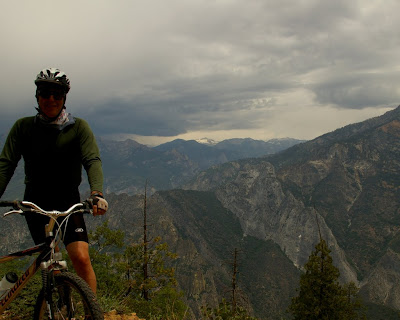 For some reason, the juxtaposition of the bikes and the trees was irresistible. We felt like ants: 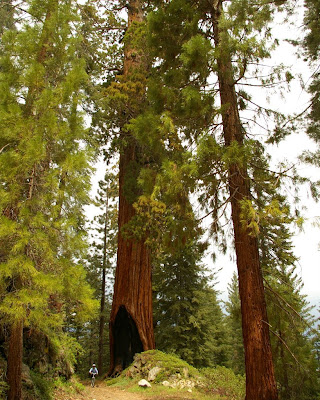 After about 10 miles, and after passing the ruins of a logging camp, we came to what seemed to be an impassable swamp. There was a very dense grove of Sequoias, just to the north and west of Evans Grove. The ferns were just starting to sprout: 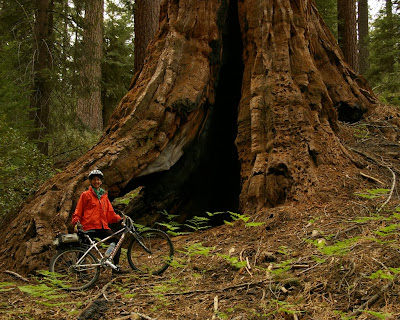 We thought we were going to turn back, but then we spotted a little trail across the swamp. Based on our previous visit to Evans Grove, I knew that the old railroad grade extended across the swamp to the east. We dragged our bikes across the ravine and through the swamp, and, sure enough, the old unused railroad grade was waiting for us on the other side. We rode for about another mile, passing more huge (and seldom seen) Sequoias. (This picture might be worth clicking on -- you will really get a sense of the scale when you see Felice on her bike.) 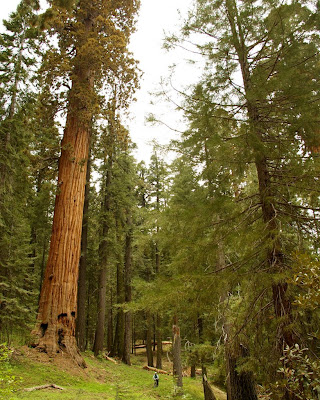 On our way back, we unfortunately took a wrong turn; the fire roads aren't always marked, and they look all the same. We headed uphill for a long time to Tornado Meadow, which was very pretty but which was not where we wanted to go. We eventually realized our mistake and headed back downhill to the main fire road. (The detour added almost 6 miles to our trip, which would've been fine except that we were tired by the end of the day. The total distance was about 26 miles, which is a fairly long mountain bike ride at high altitude.) Eventually, we came back to the Lockwood Grove; by then, the sun was out, and we could see the entire grove stretching along a ridge: 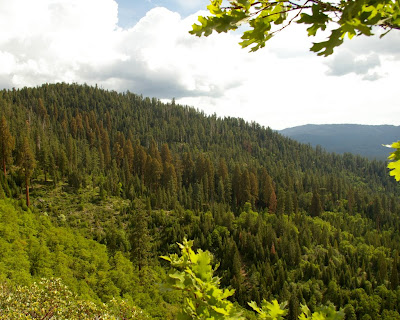 Here is a close-up of the ridge; you can see that the Sequoias are very different in color and shape from the rest of the conifers: 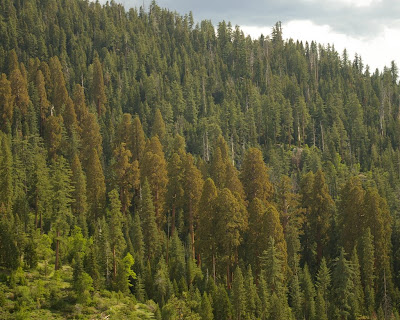 We couldn't resist one last shot showing the true scale of the trees -- the little dot at the base of the tree is Felice: 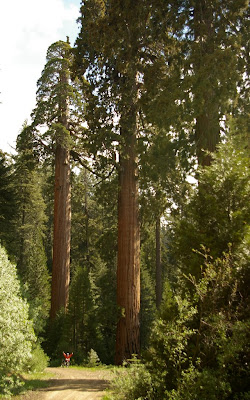 That evening, back at the campsite, the clouds cleared up just as the sun was setting. I'm not sure whether the phenomenon of ""alpenglow" is real or not, but these alps were glowing. (This picture might be worth clicking on.)

The next day, we hiked into Muir Grove. Since the access road through Dorst Campground was closed, we decided to ride our bikes down to the trailhead. We thought that we would be the only ones at the grove, since it was so hard to reach. As it turns out, there were two other groups who had essentially the same idea. But it was still very peaceful. We laid down on the forest floor in the middle of a ring of giant trees and looked up. These trees, which look slender in this picture, are actually 10 feet or more in diameter, and rise above us for at least 200 feet: 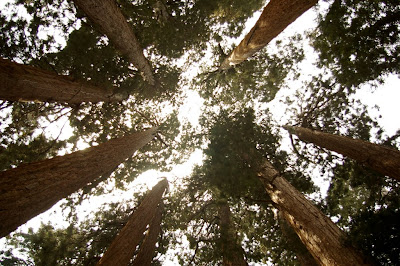 We took the time to explore a lot of the grove, going downhill quite a ways and then along the ridge to the northwest. Although we've been to the grove several times, we never realized how extensive is really is. The dogwood trees were in full bloom: 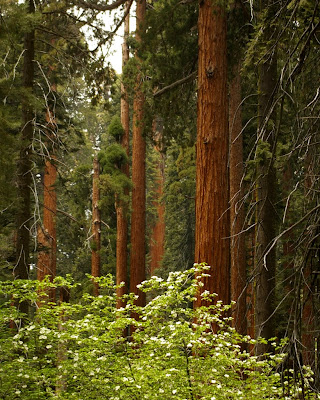 On the trail to and from the grove, the hillsides were carpeted with these little purple and white flowers, which were about a half-inch high. (If I can figure out what these flowers are called, I will edit the blog to include the proper name.) 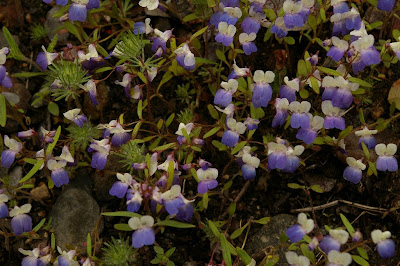 On our way back, we saw a doe (a deer, a female deer) on the trail ahead of us, acting strangely. She walked about 20 yards ahead of us, stopping every so often to graze and then to look back at us. After a little while, we looked around and realized that a very young deer was following us. We figured that we had separated the mother from the child, so we stopped. The young deer then circled around us. The mother then approached her child, in a seemingly tender fashion: 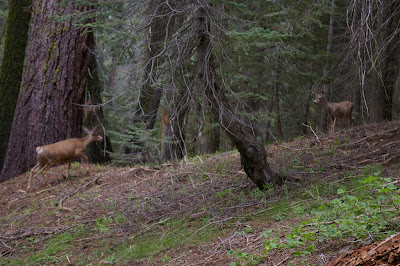 Uphill, the child waited for her. She then charged up to the child and gave it a vigorous head-butt! 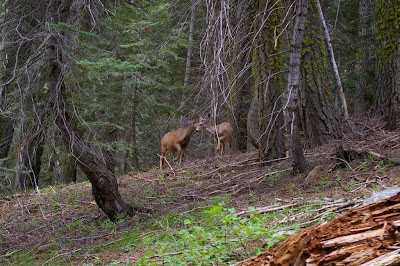 The child ran downhill in a panic: 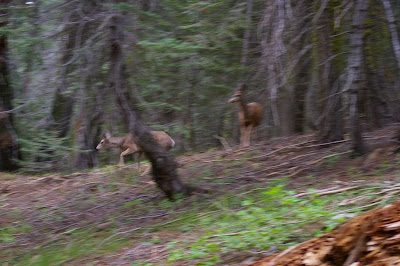 This odd dance continued for a few minutes, with more approaches and more head-butting. We speculated that she may have been pregnant and may not have wanted to devote attention to last year's fawn. The yearling still wanted to be the baby of the family, but the mother was trying to drive him away, to force him to find his own food.

The next day, we hiked down through Redwood Canyon toward Big Springs, before driving home. There, too, the dogwoods were putting on a show: 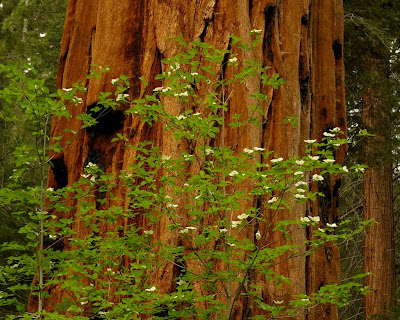