Just before the start of the Spring semester, we managed to squeeze in several days of camping at Potwisha Campground, at the south end of Sequoia National Park. This was the maiden voyage of the new LMIC – it's very similar to our original LMIC, except that it has much more ground clearance and larger holding tanks: 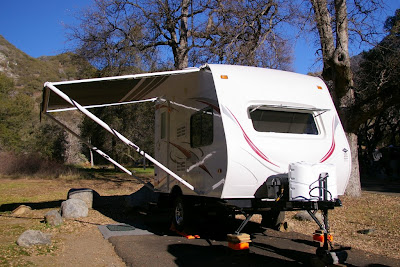 We had wanted to camp up at Lodgepole, at 6500 feet, but the park service closed the campground during the winter. Nevertheless, we were pleasantly surprised by Potwisha Campground, a few miles east of Three Rivers. For much of the year, this area is too hot for us, because it is at roughly 3000 feet. But during the winter, it is cool during the day and cold at night. There are large oak trees throughout the campground, providing lots of shade. During the week, the campground was very quiet. (As one might expect, it was not so quiet on Friday and Saturday night.)

Wednesday, January 11: We took advantage of the cool weather to hike in the South Fork area near Three Rivers, an area that is usually too hot for hiking. We took the Garfield Grove trail. Although we eventually arrived at the grove, the trail was very steep, very long, with lots of poison oak (which fortunately didn't affect us). We probably won't take this trail again – it wasn't worth the tremendous expenditure of time and effort.

That night, the moon rose over the Great Western Divide, screened by some high clouds. (Remember to click on a picture to enlarge, and click back to get back. And you can double-click for a really big image.) 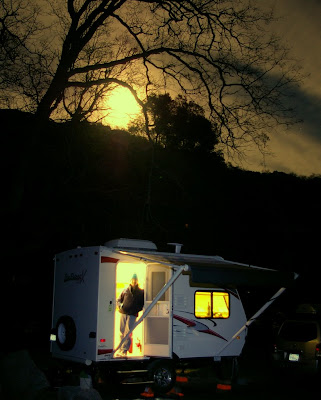 Thursday, January 12: We took advantage of the absence of snow and headed up toward the Giant Forest area. There was a huge construction project on Highway 198 leading to the park, which was inconvenient (but which held down the crowds substantially). On the way up, we had to wait for a while before passing through the construction zone – we stopped right below Moro Rock: 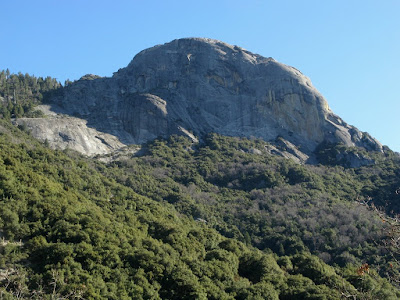 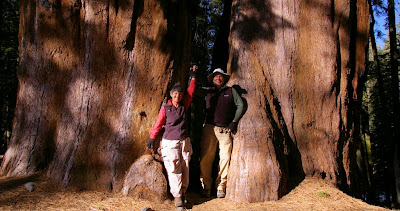 There were wonderful views of the Great Western Divide; in a year with normal snowfall, we would never have been able to get out to this area (even on snowshoes) because of the avalanche danger: 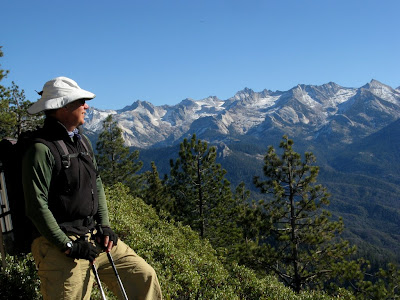 Although the trail skirted along the edge of a cliff, it was very well graded -- good footing, with not a lot of climbing and dropping. Surprisingly, there was quite a bit of "bear scat" – the Ranger later told us that the bears had been restless due to the warm weather and the lack of snow. Late in the day, the shadows highlighted the ridges of the Kaweah Peaks:

That night was windy, cold, and clear –- we could see the Orion Constellation rising over the mountains. (For folks who like technical information about photographs, this was taken at an ISO of 3200 for 30 seconds.) I think that if you click on the picture and enlarge it, you will be able to see that some of the stars are bluish and some are reddish – these are their true colors, which are revealed by the long exposure: 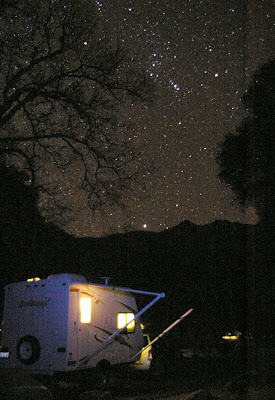 Friday, January 13: We again headed up toward the Giant Forest area near the Gen. Sherman Tree. This area is usually very crowded but was almost empty due to the construction project, which discouraged many of the tourists. We took a six mile hike on the Trail of the Sequoias and saw only two other couples in six hours.

This is probably the best grove of old-growth sequoias we have ever seen – hundreds (if not thousands) of huge trees in an open forest. Looking up at the trees, it is hard to grasp their size. But the fallen trees are sometimes even more astonishing –- look carefully, and you can see that Felice is standing at the base of this root ball: 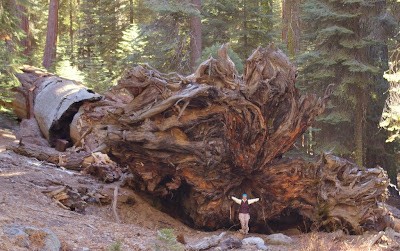 The weather was cool and dry; we stretched out on the soft forest floor inside the Senate Group and looked up at the circle of trees in the late afternoon light. The forest was absolutely silent and empty: 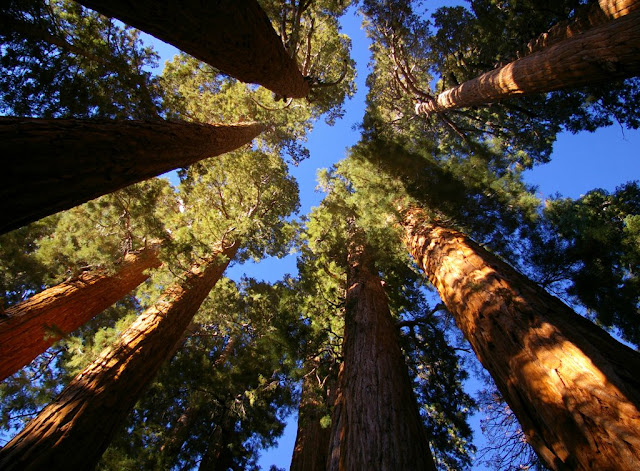 Saturday, January 14: In the morning, the National Park folks opened the highway unexpectedly, so we took advantage of this opportunity and hiked up to the crest of Little Baldy at 8000 feet, with terrific 360° views of the Silliman Crest and the Great Western Divide: 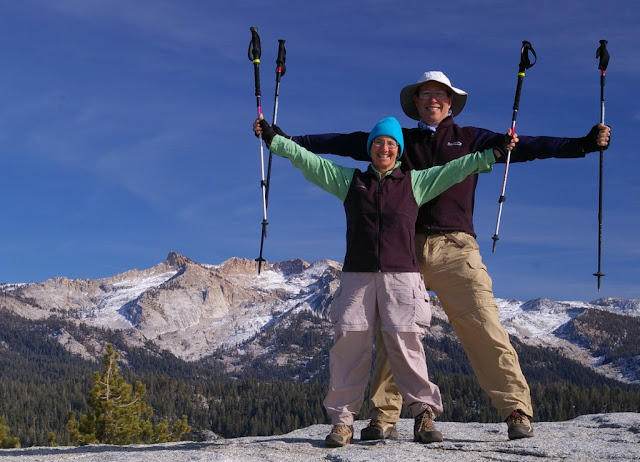 We had it all to ourselves for the first half-hour on top of the dome – it was exhilarating to see all of the areas of the park that we had hiked over the last several years -- Big Baldy to the northwest, Buck Rock to the north, Mitchell Peak to the northeast, Tokopah Valley to the east, Panther Gap to the southeast, and Moro Rock to the south.

In the afternoon, we hiked a portion of the Wuksachi trail, encountering quite a bit of ice. It was clear that in a season of high water, there would be several difficult stream crossings on this trail.
Posted by Dan Schechter at 8:59 PM 2 comments: