(Remember that you can click on the photos to see a slideshow, and then hit "escape" to get back to the text. Also, a note on the photo credits: as always, both Felice and I took these shots, and many of my shots resulted from her suggestions. I do the photo editing using Lightroom; my goal is to reproduce just what we saw, as faithfully as possible.)

(Also, please note that the fonts on this particular post are messed up -- the blog software is acting up, and someday I will figure out how to weed out the bad code. Sorry for the inconvenience!)

Monday, September 4: The heat wave showed no signs of breaking; although the nights were pleasantly cool, the hikes were not. So we decided to leave the Desolation Wilderness area. Only one problem: which way to go when we reached the bottom of the hill at the intersection with Highway 50? We could go left and then spend some high-altitude time in the Eastern Sierra. Or we could go right, do some bike riding on the river trail in Sacramento, and hunt for ripe blackberries. It all depended on the air quality in the Eastern Sierra.

We hitched up and got to the bottom of the mountain and fired up Felice's marvelous iPhone: turn left for the Eastern Sierra! Only one more problem: there was so much Labor Day traffic streaming down Highway 50 from Tahoe that it took us a full 10 minutes to wait for a brief break in traffic so that we could make our left turn.

A few hours later, we were happily ensconced in one of our favorite high-altitude boondocking sites above Mono Lake. After getting all set up, we took a walk as a late afternoon thunderstorm gathered over Kavanaugh Ridge. Note the celebratory sweatshirts – at last, the temperature was in the low 60s, which was a huge relief: 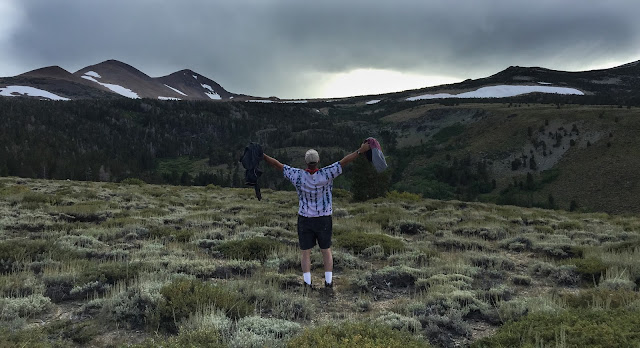 That night, the moon was almost full, lighting up the clouds and the trailer: 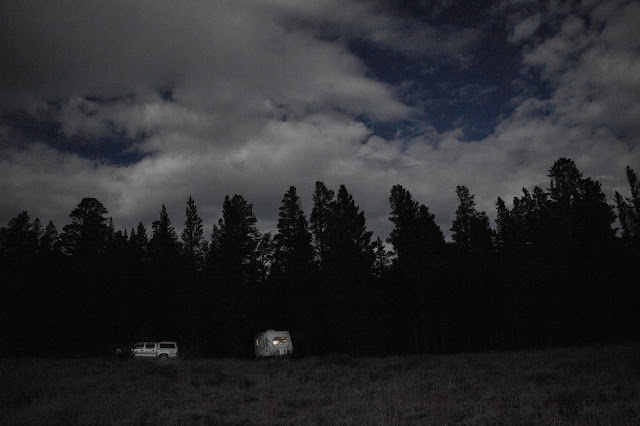 Tuesday, September 5: I got up early to do some stretching and caught sunrise – that's Venus in the top center, and that's the eastern shoreline of Mono Lake in the lower right: 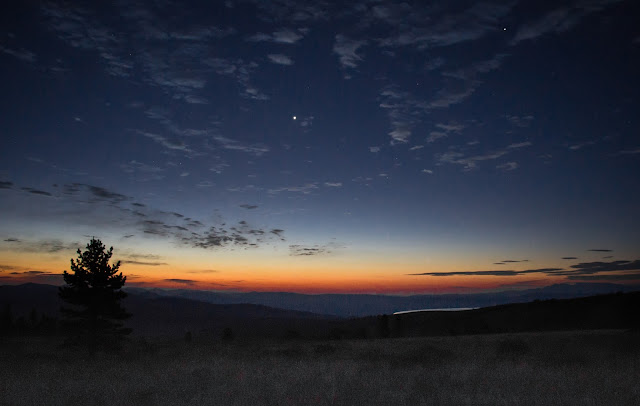 Unfortunately, this shot can't quite convey the smell of sagebrush and pine before dawn on a summer morning: 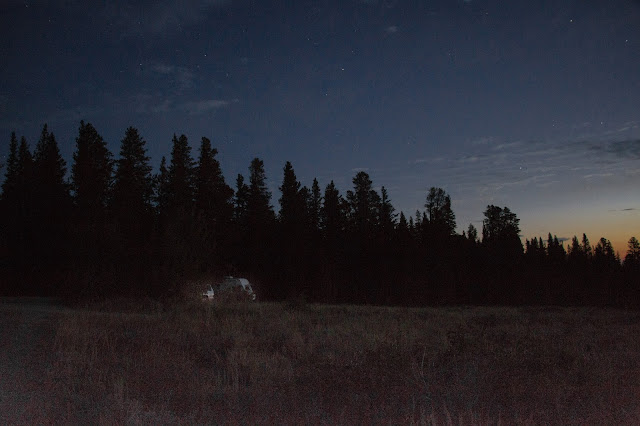 To beat the heat, we headed up to Virginia Lakes. Along the way, we passed my favorite road sign: 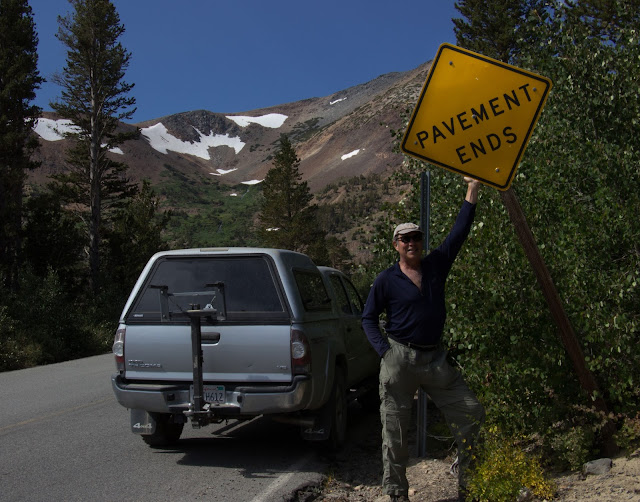 There were still quite a few wildflowers, which was surprising for September: 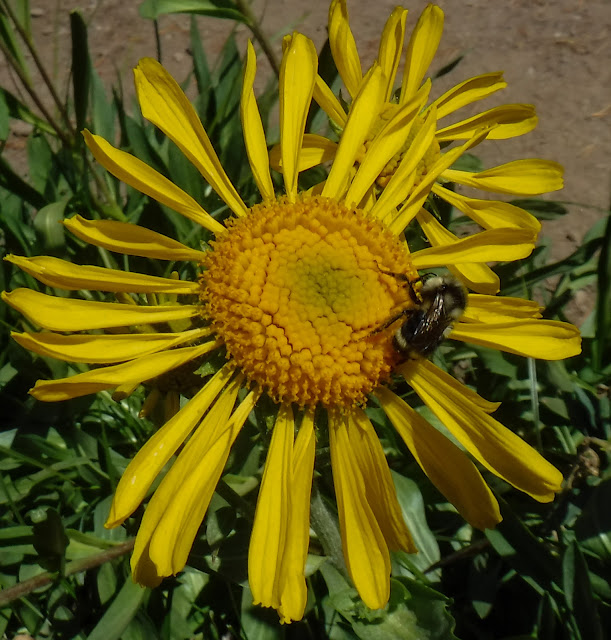 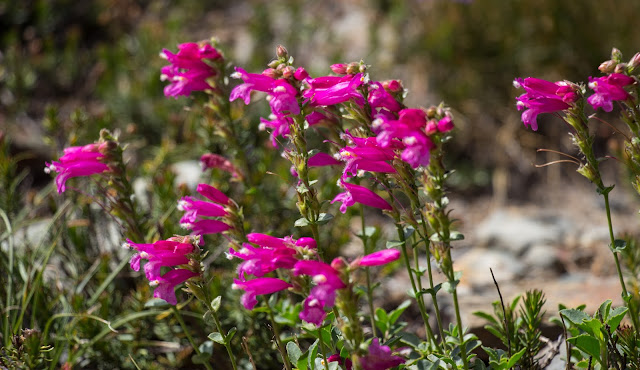 And there was still plenty of snow, left over from last season, in the shady areas on the north sides of the mountains. In this shot, Black Mountain is on the left and the trail's summit is in the middle, with reddish Excelsior Mountain peeking up behind the ridge: 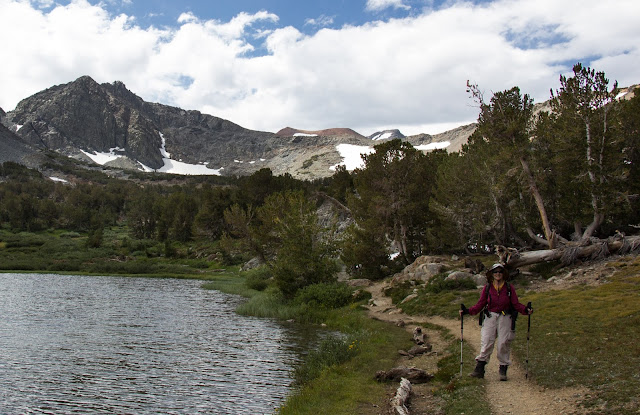 The summit was very windy (as usual), which was delightful. We took this "wide shot" with the aid of our radio-controlled shutter trigger. The tripod was weighted down with rocks -- please do not ask how I learned this trick: 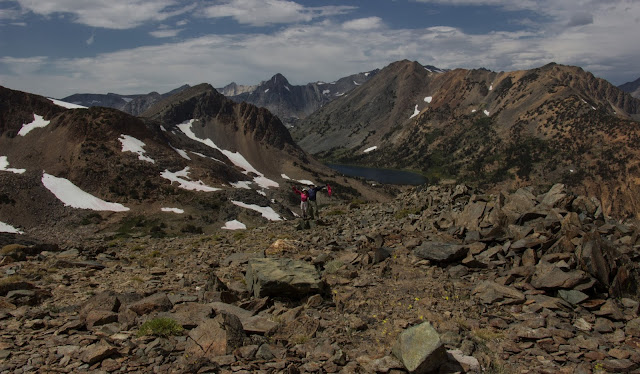 The snowmelt pond at the summit was still going strong, complete with a twenty-foot-thick snowbank -- I'm in the center of the shot, where the snowfield tapers off to a mere seven feet:

Before we headed down, Felice climbed the shoulder of Black Mountain:

Imagine this whole valley full of glacial ice – what a sight that would have been! Geologists say that Mono Lake was hundreds of feet deep and was choked with icebergs: 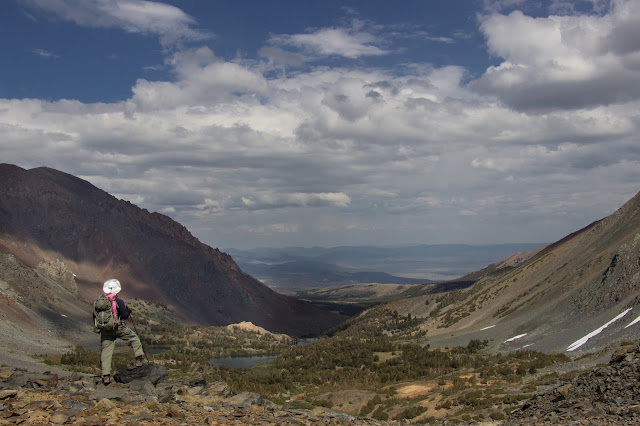 Even on a barren talus slope, the purple penstemon were still waving in the breeze: 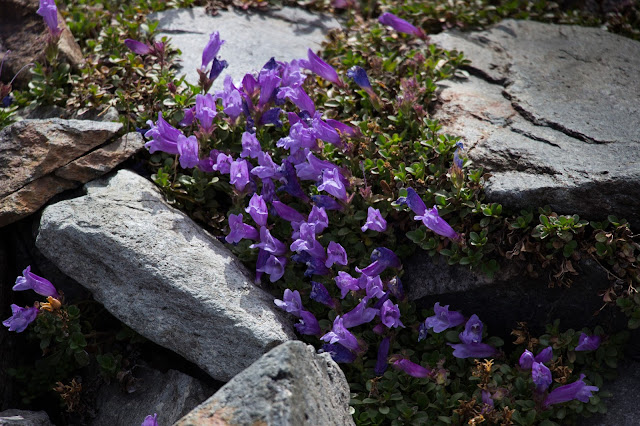 Wednesday, September 6: Since the weather was cloudy and cooler, we went to Lundy Canyon, which is at a lower elevation – not great for a hot day, but just fine in the right conditions. We were delighted to see so many wildflowers so late in the season: 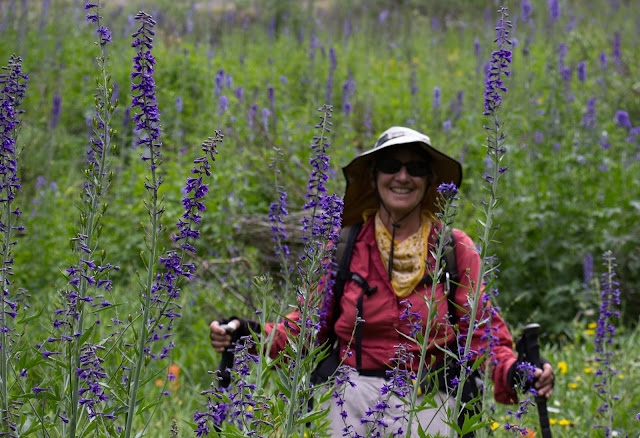 The cascades at the top of the canyon were booming as if it were June, not September: 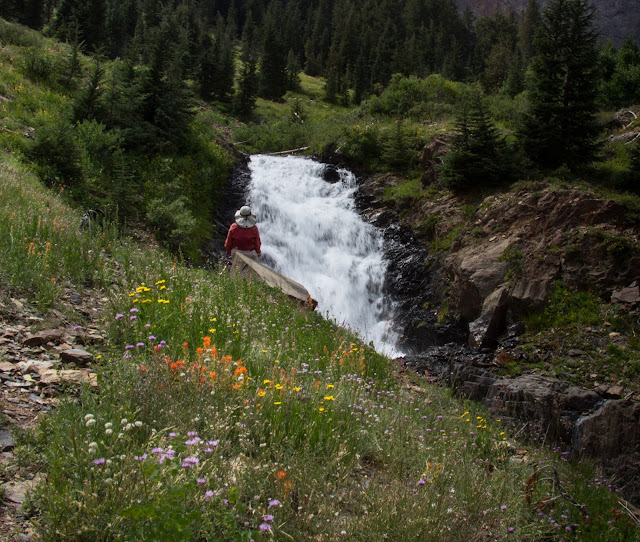 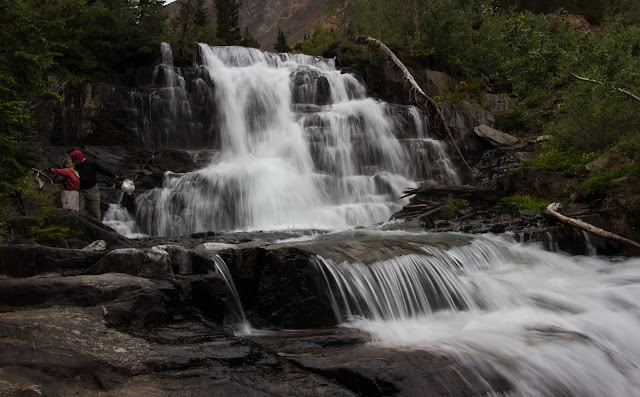 We had some fun with the slow-motion features on the iPhone and the GoPro: