We had a few free days, so we headed off to Lone Pine in the southern part of the Owens Valley.  Unlike our usual back-country "boondocking" trip, this time we stayed in an RV park so that we would have access to Wi-Fi (so that I could stay in touch with my students, who were studying for final exams).  The RV park wasn't lovely (a little too noisy), but it got the job done. And it was well-located, not far from several trailheads.

April 30:  We drove up to Whitney Portal to hike along Lone Pine Creek.  There was a really good cascade just above the parking area. It had snowed the week before, so there was a fair amount of water in the stream, even though this was a drought year.  We crossed over to the south side of the stream and hiked up to the base of the cascade: 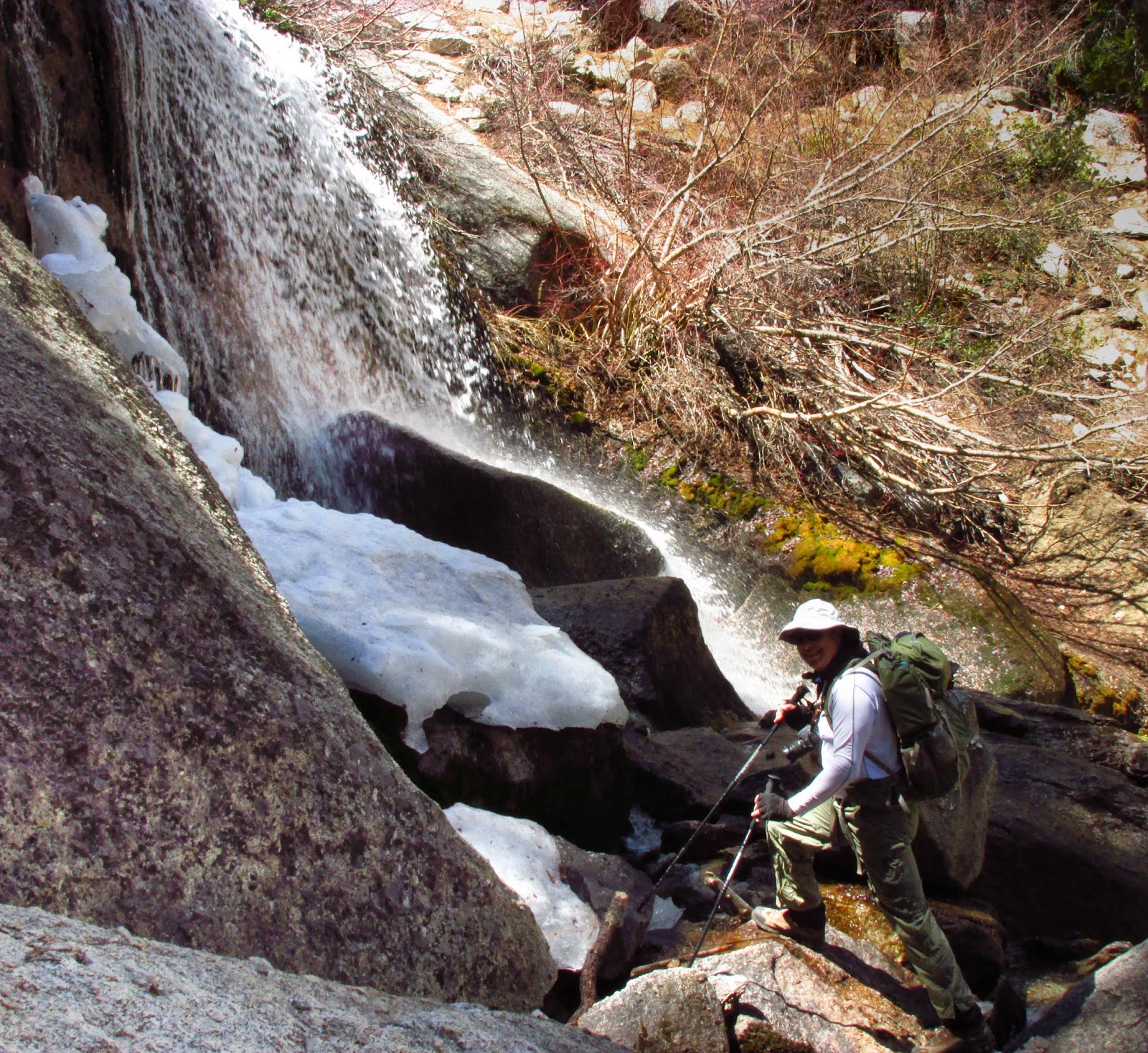 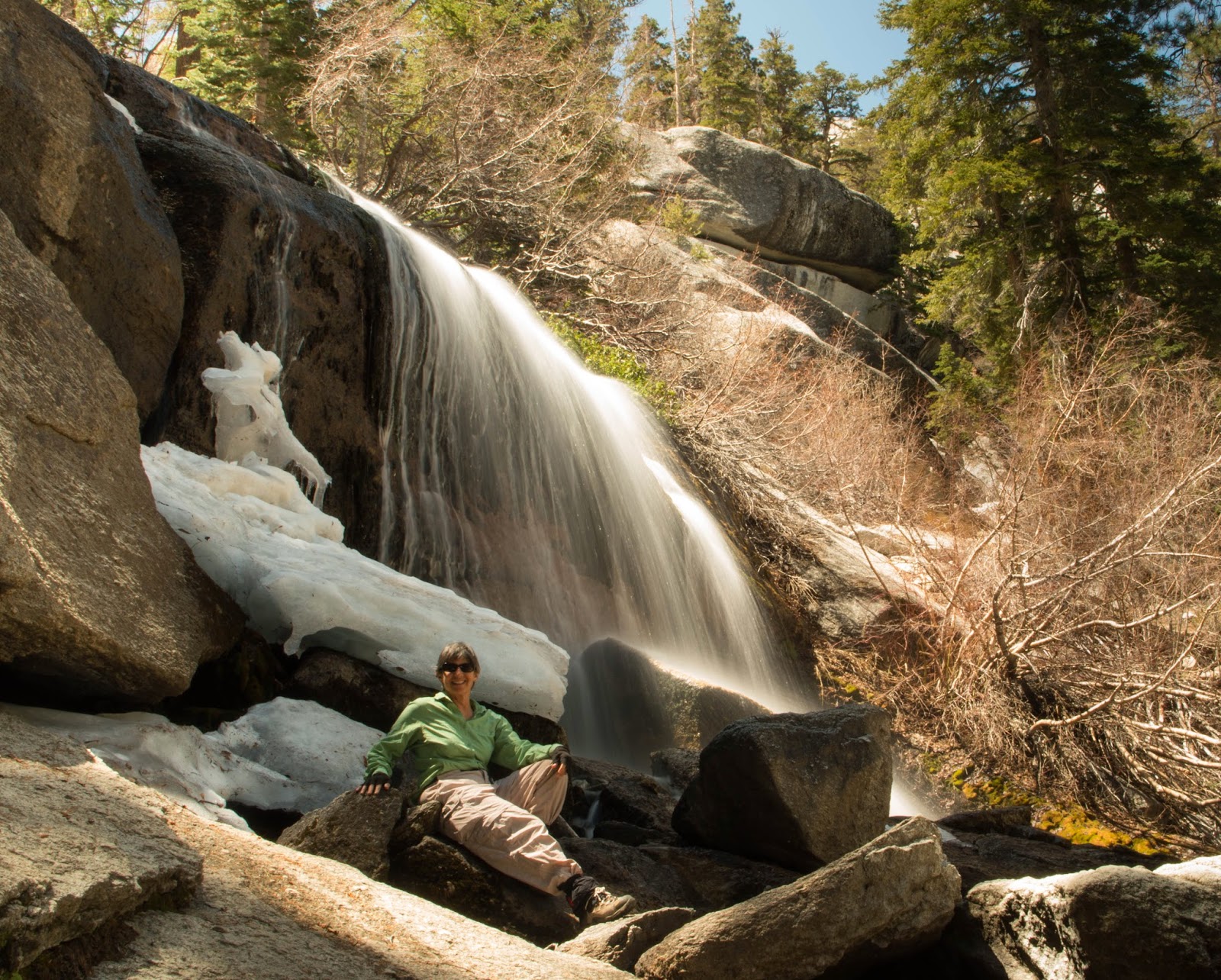 At the edge of the falls, the water flowed off in triangles, catching the sunlight: 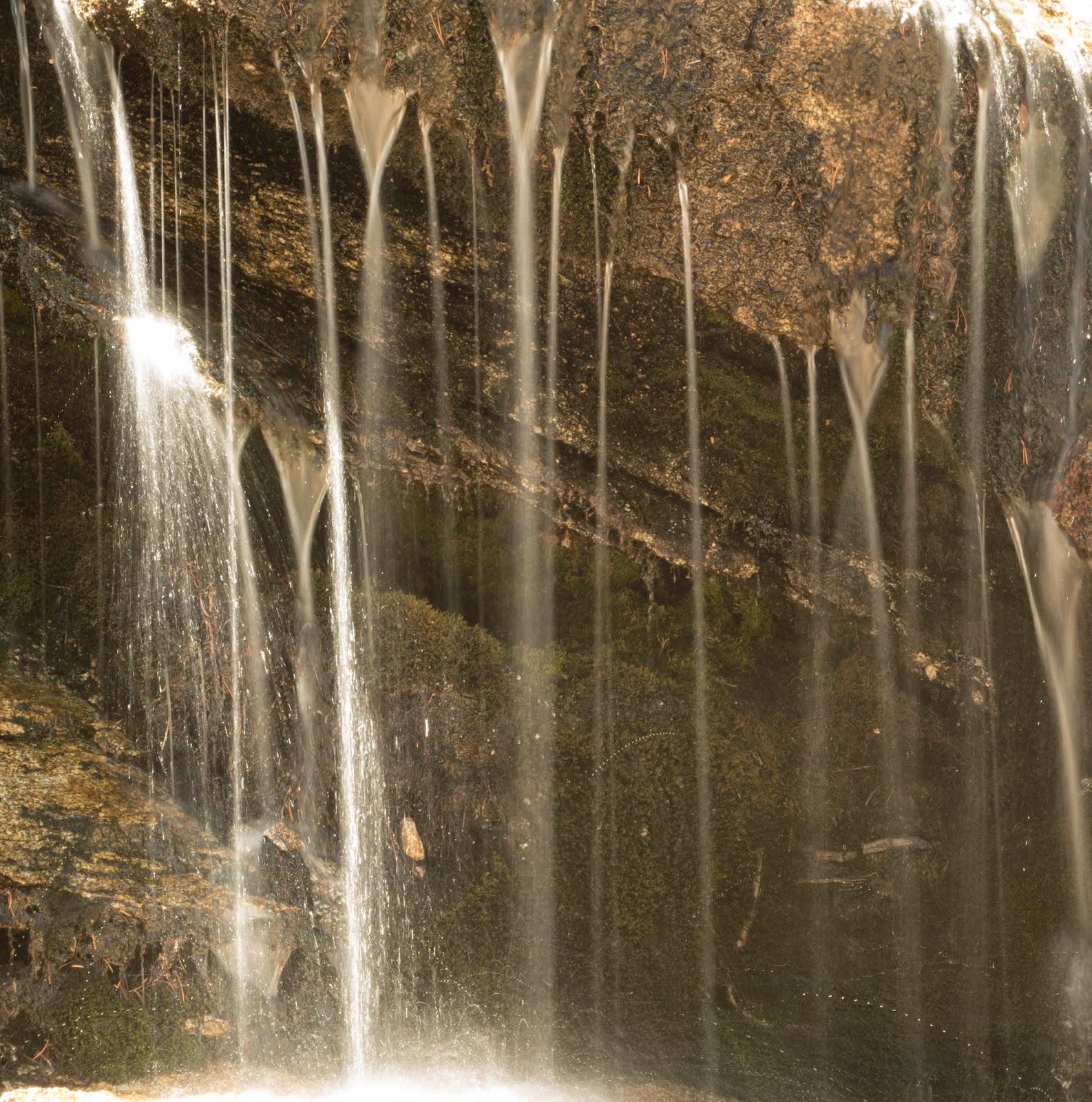 After eating lunch by the falls, we hiked down the National Recreation Trail alongside the creek. The willows were just starting to put out buds, called “catkins.”  These look spiky but they are actually very soft – each one is about the size of a fingertip: 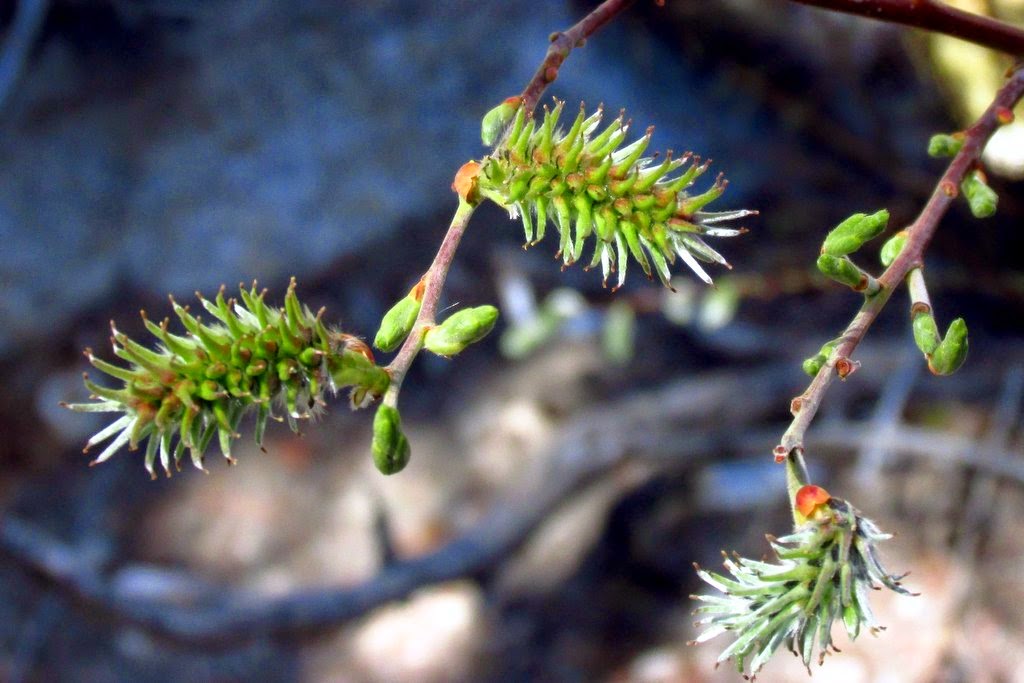 All along the trail, there were fields of massive boulders that had fallen from the sheer granite cliffs towering thousands of feet above the creek. Here, Felice is standing on a single fallen rock – this is not an outcropping connected to the hillside: 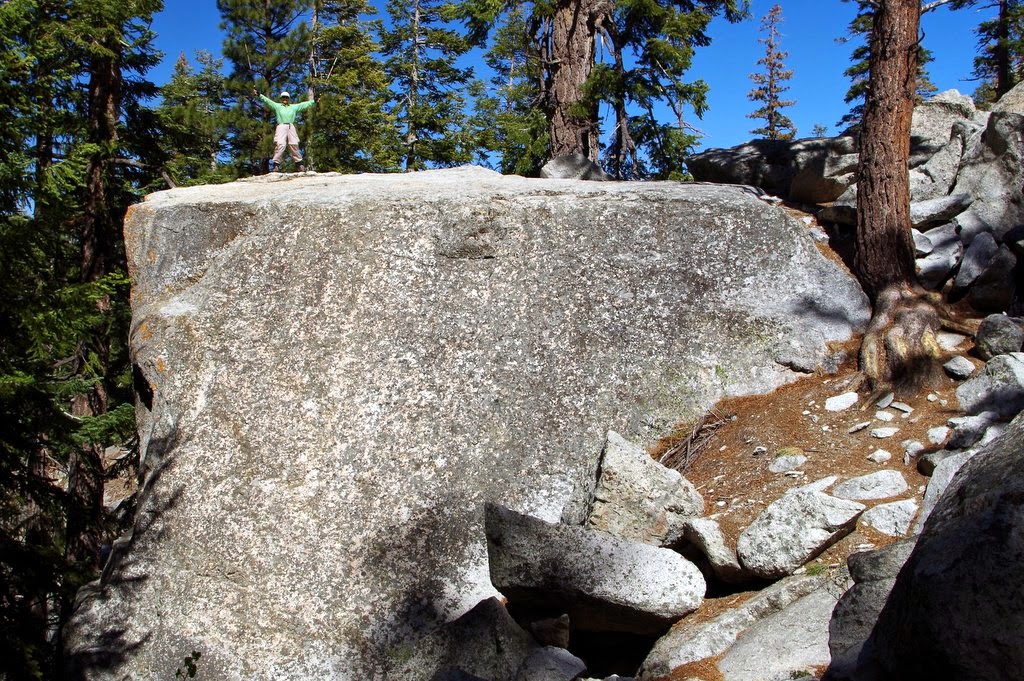 May 1:  We returned to the Whitney Portal area, to hike up to Lone Pine Lake.  The walk up is fairly strenuous – about 1700 feet of elevation gain (from 8300 to 10,000) -- but we were kept entertained by the constantly-changing views of the snowy canyon walls: 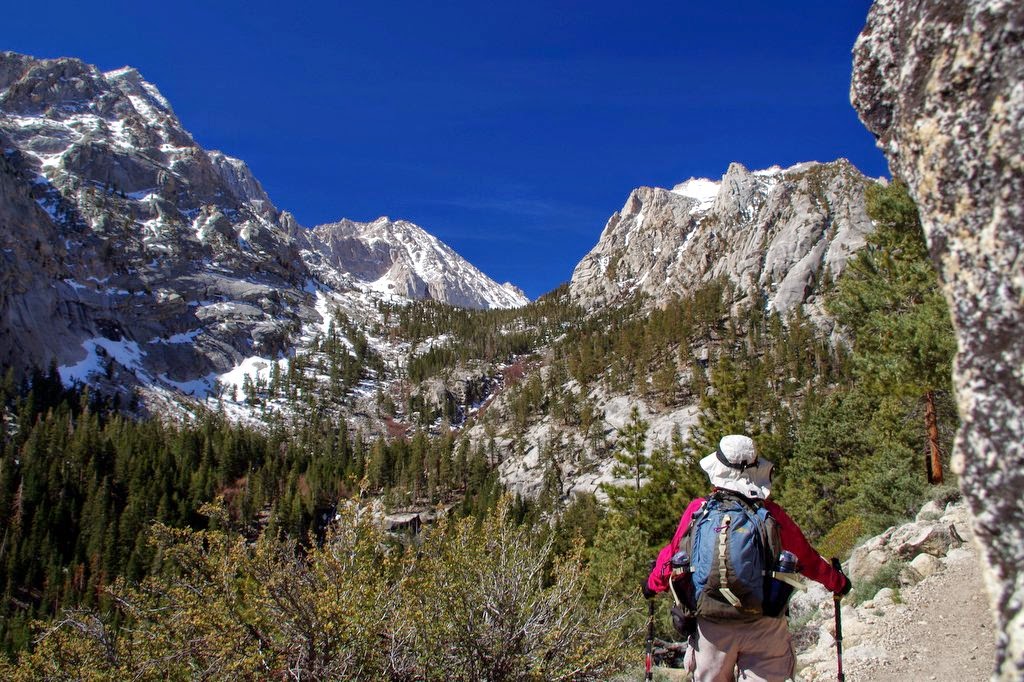 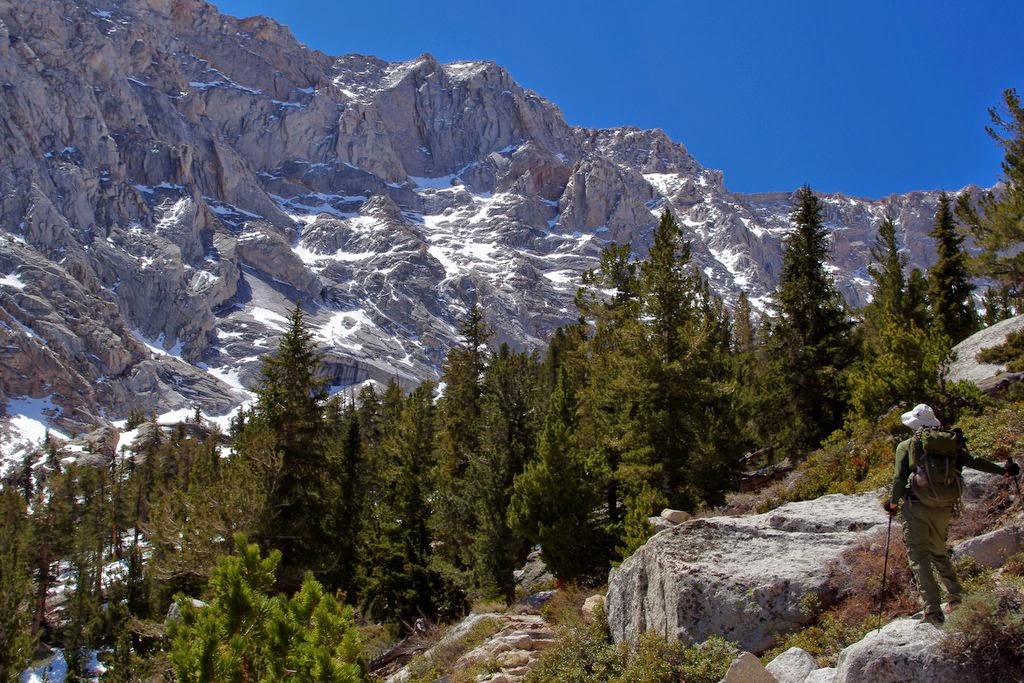 As we got up toward the lake, there were sweeping views back down the canyon of the Owens Valley and the White Mountains to the east: 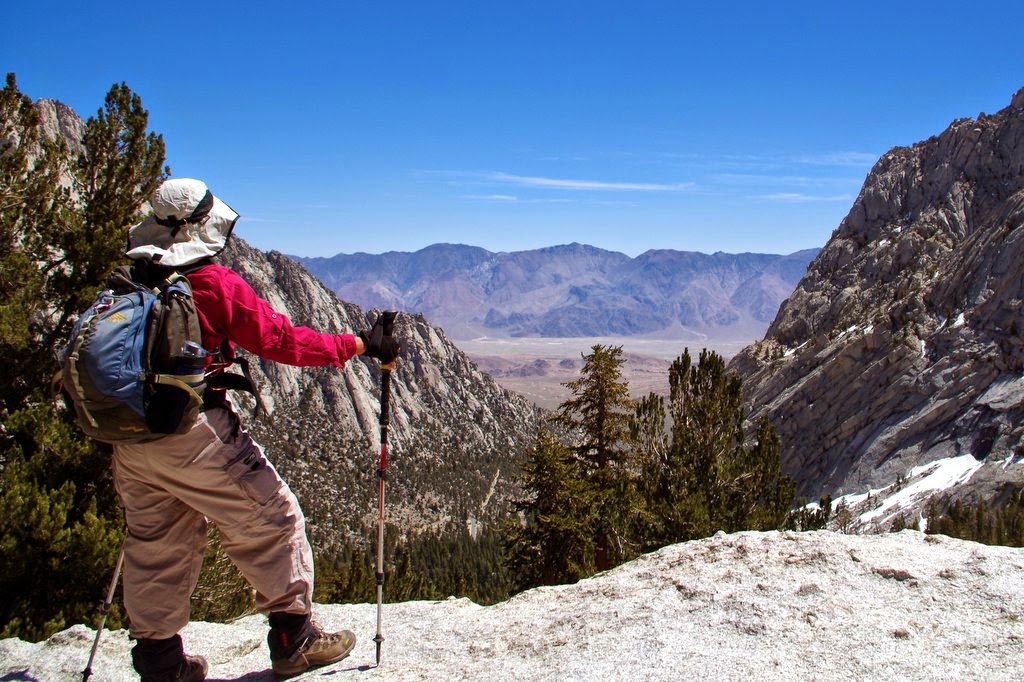 The lake itself was frozen, with only a few areas of open water to reflect the mountains: 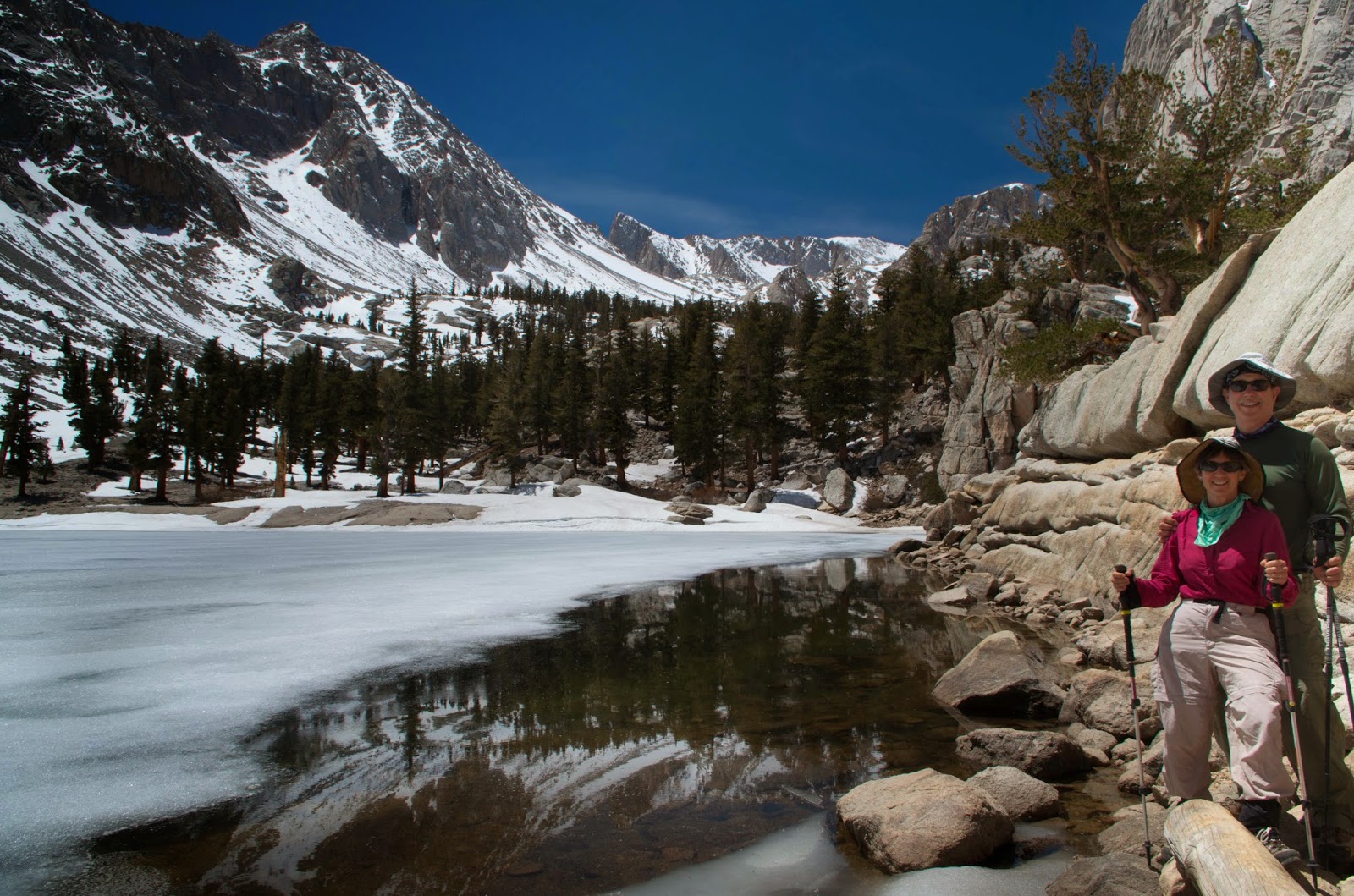 After lunch, we walked around the lake.  Felice was intrigued by the texture of the twisted pine trees – these two trunks looked almost like an upside down person: 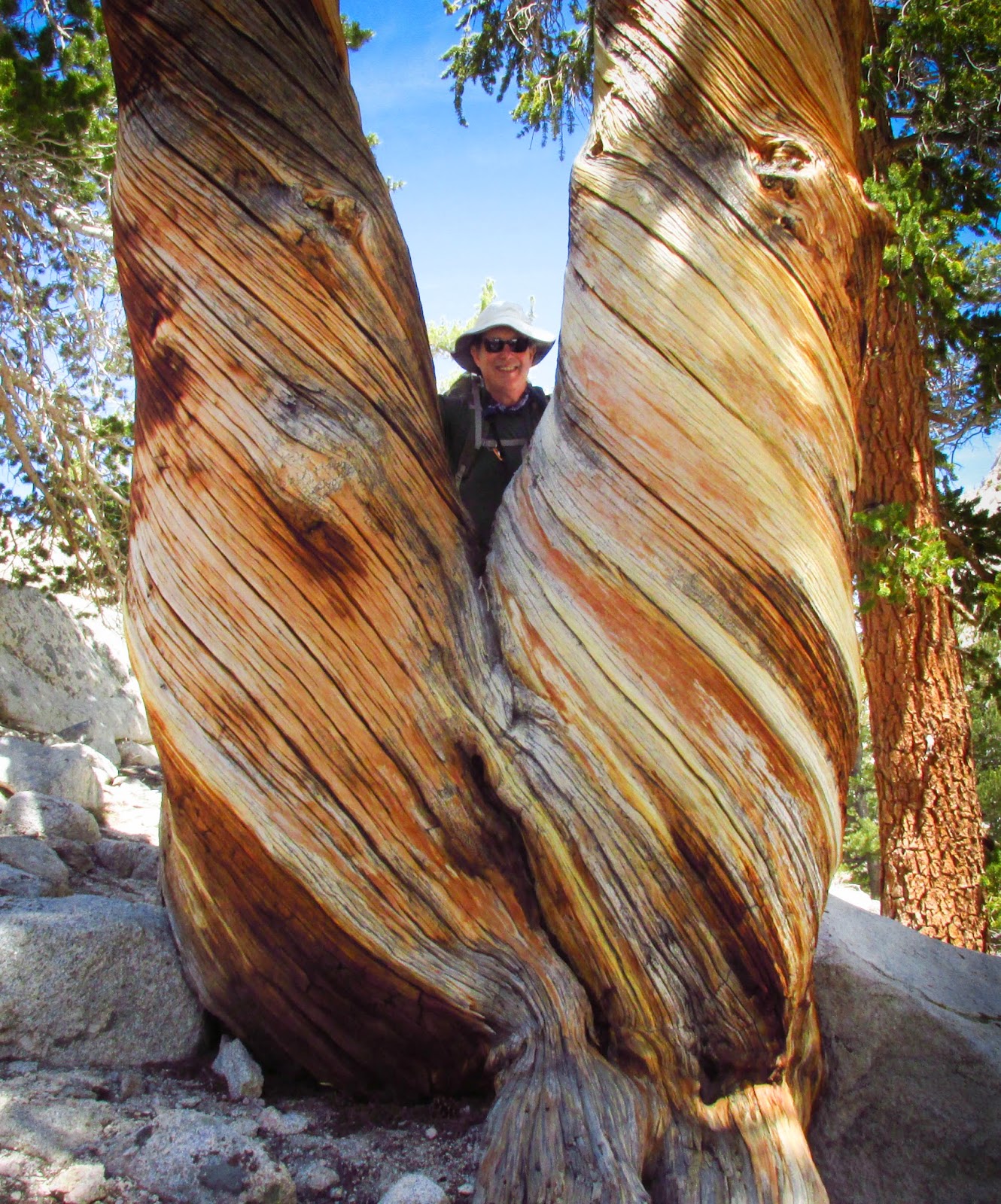 The jays were very bold, hoping for a handout.   It seemed to us that the jays at high altitude were a lighter and brighter shade of blue – I'm not sure if that's really true, or whether it was just an illusion due to the intense sunlight reflecting off the snow: 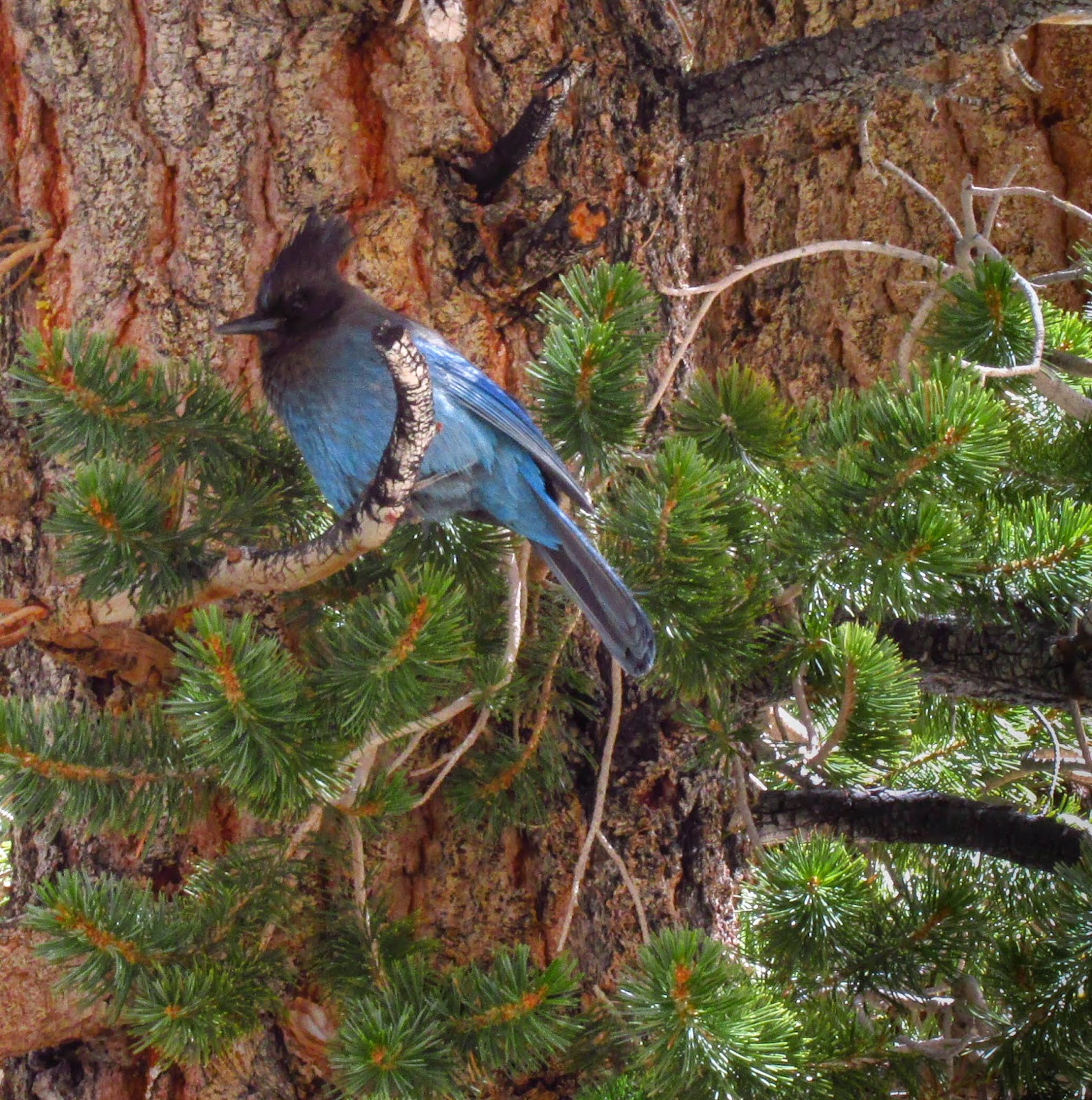 Just west of the lake, thick snow covered the trail: 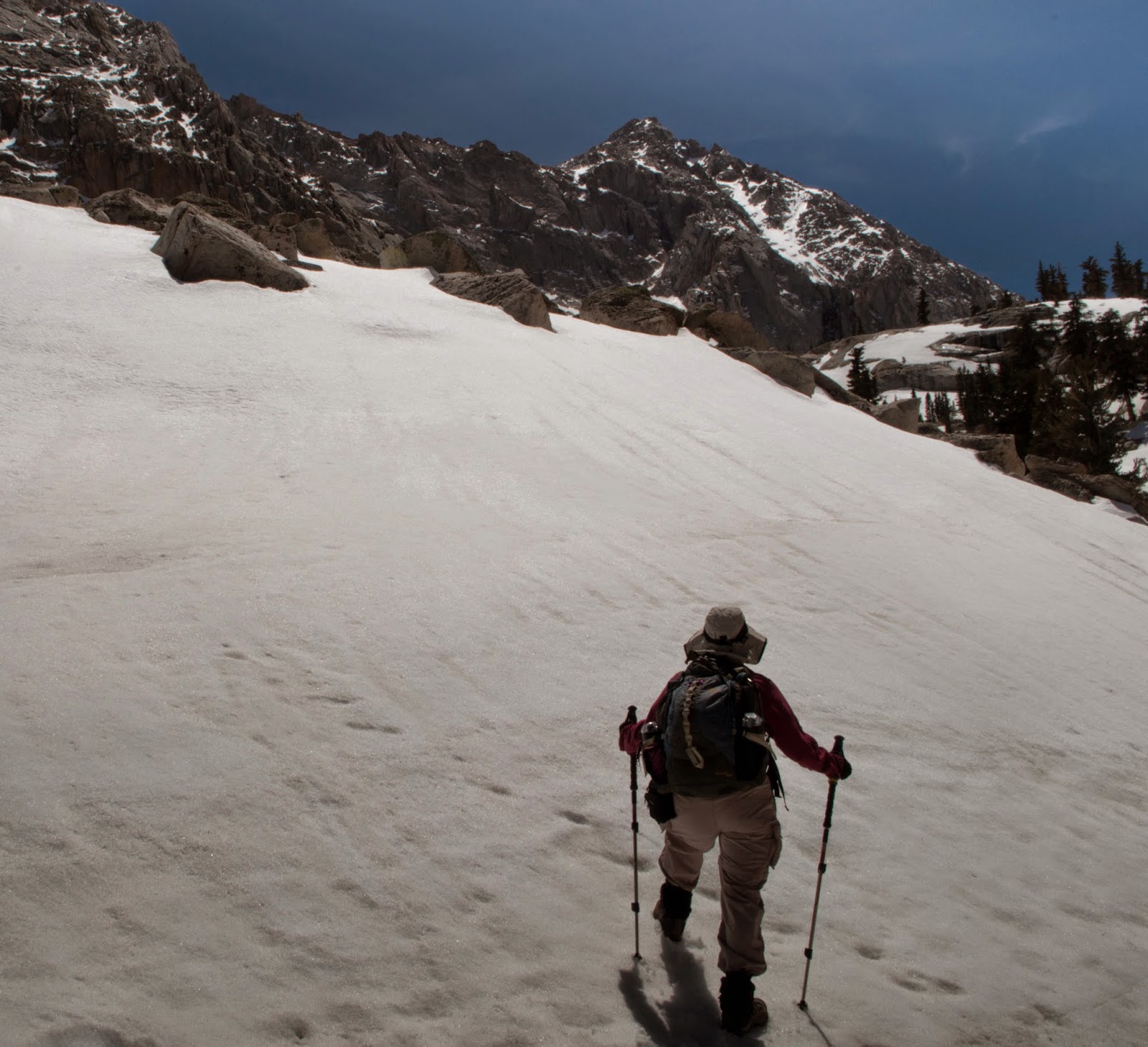 On our way back down, we came across more willows by the creek: 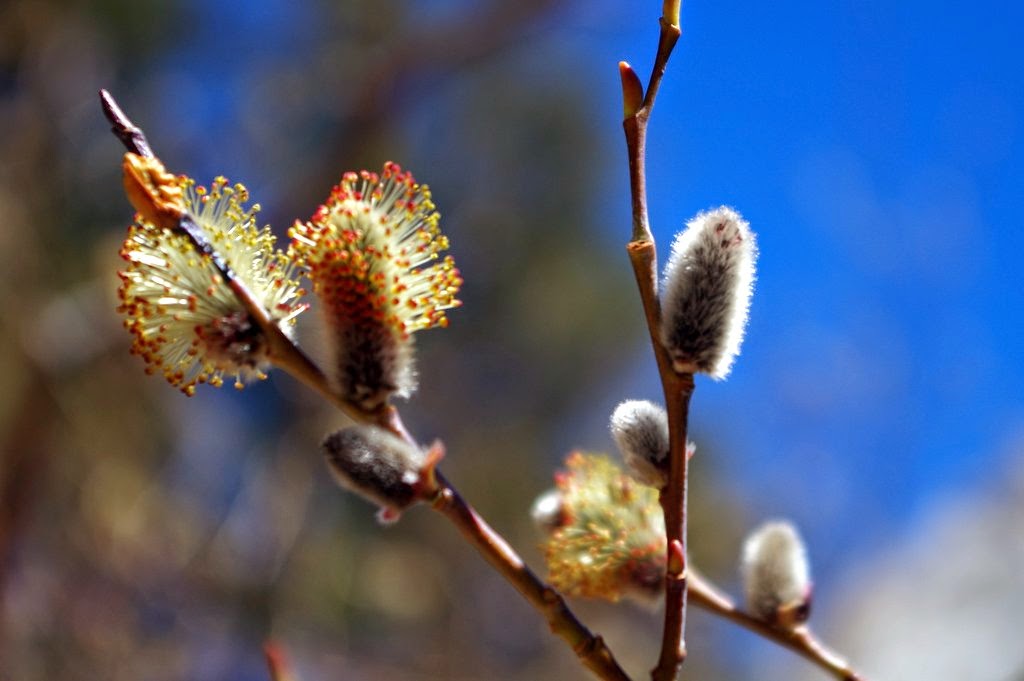 May 2:  We drove up to Onion Valley, above Independence, less than an hour from Lone Pine, and headed up the trail toward Kearsarge Pass. The trailhead is at 9200 feet, so that provided us with a nice head start!

The trail was clear in the beginning, but we soon encountered wide patches of deep snow that completely obscured the trail. We were able to use our handheld GPS to find the trail; although I am not a big fan of the Garmin software (as compared to the easier-to-read National Geographic topos), I have to admit that the Garmin hardware (an E-trex 20) was very fast and precise.

The other problem is that some of the snow was soft and rotting. We would take a dozen careful steps on the crusty surface of the snow and then our boots would randomly plunge a couple of feet (a phenomenon colorfully called "post-holing”), down to the frozen rocks underneath. It was a little awkward and treacherous; on the other hand, it was a huge treat to be essentially all by ourselves, up in the High Sierra, with a lot of snow – it really added to the beauty of the granite walls, and it gave us the spurious sense of being “adventurers.”  We soon put on our micro-spikes (slip-on crampons) and our knee-length snow gaiters, and things got somewhat easier, especially where the trail cut across steep snowfields: 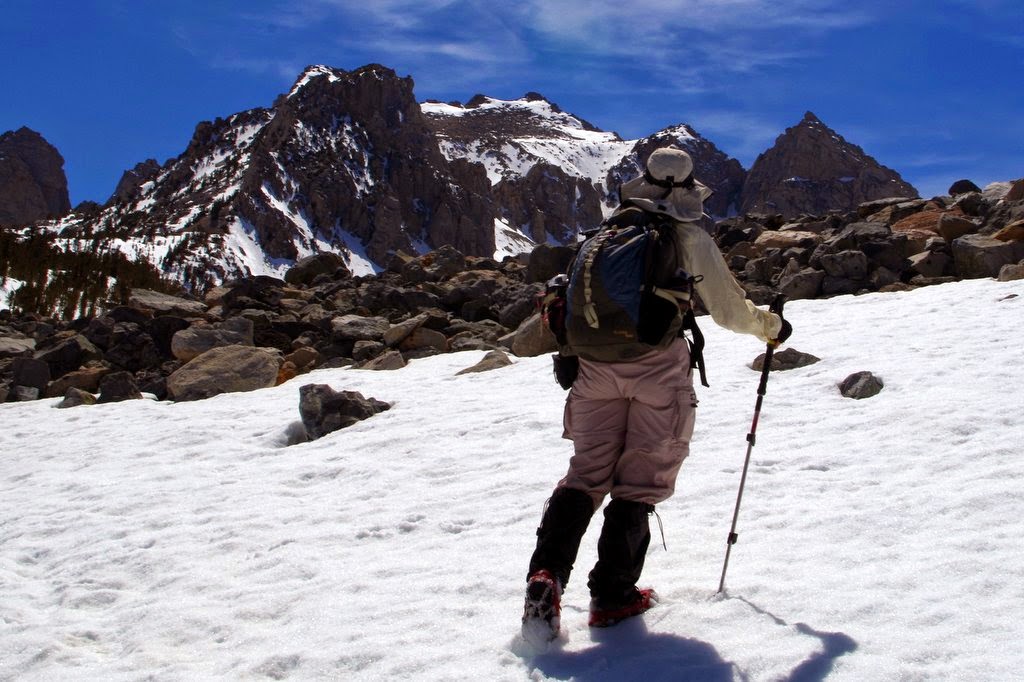 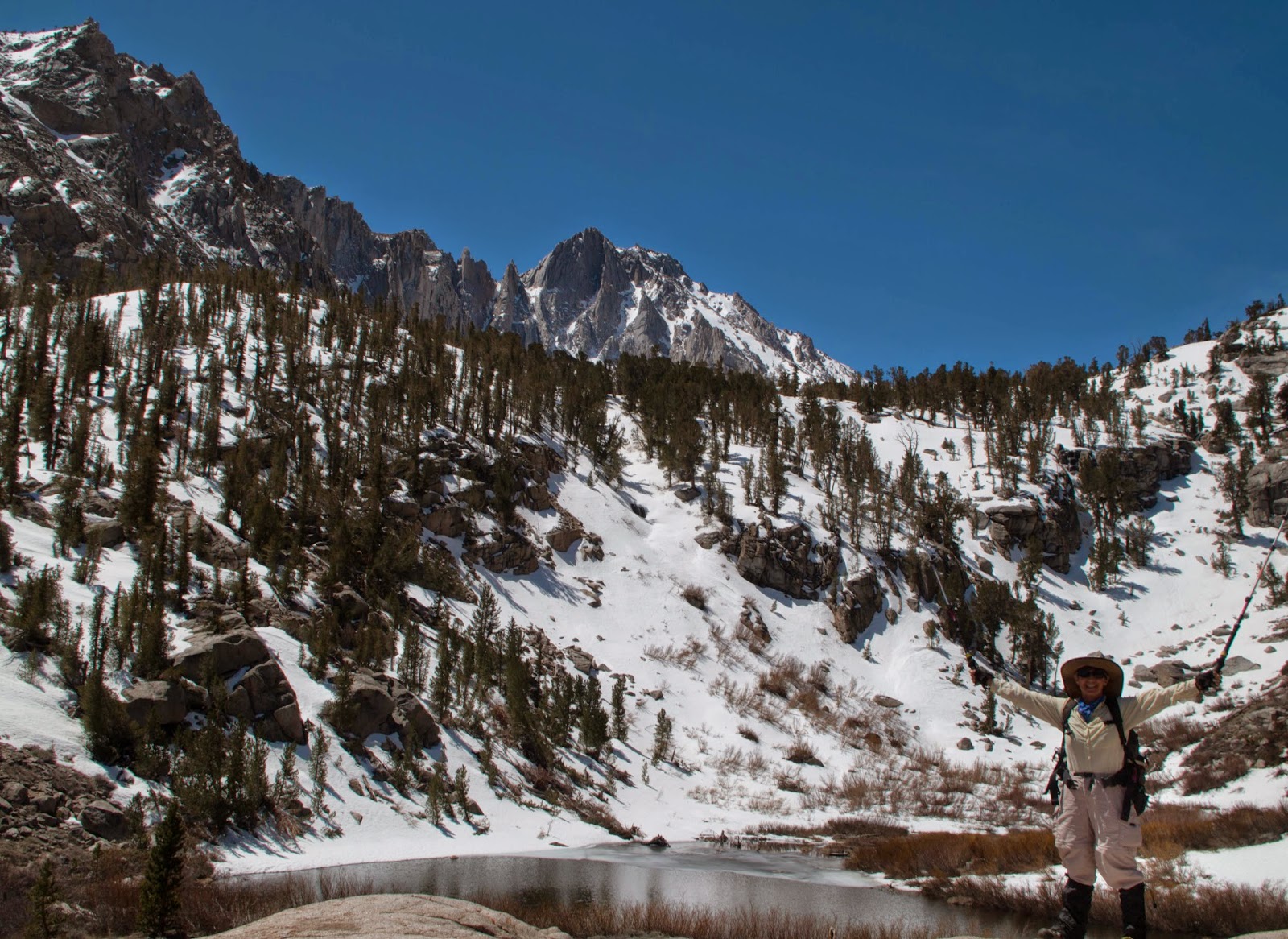 We pushed up through the snow to Gilbert Lake, at around 10,400 feet, where we stretched out on a big flat rock for the obligatory after-lunch "boots and micro-spikes" shot: 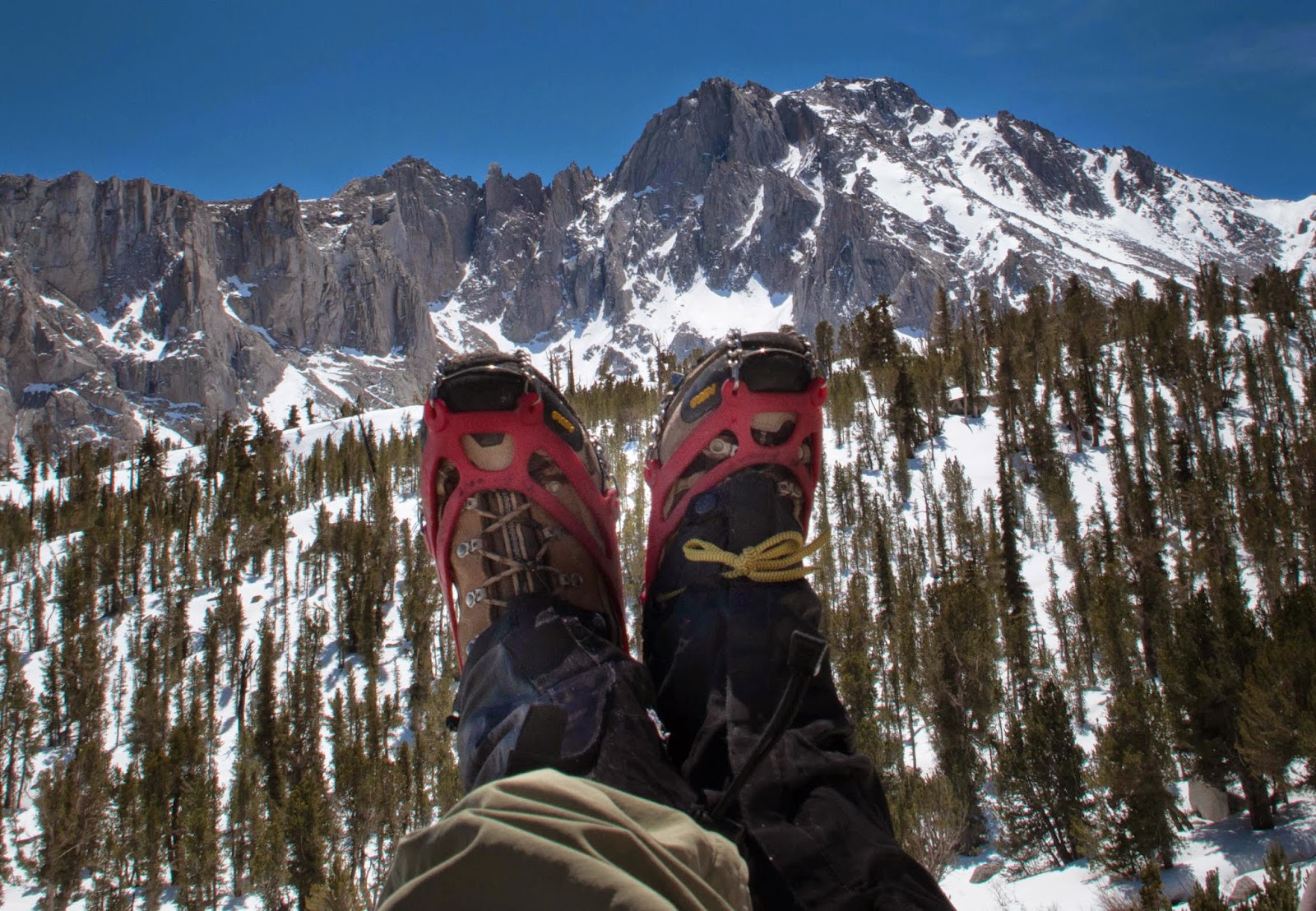 From our perch high above the lake, we saw what appeared to be bear tracks cutting across the frozen surface of the lake – we couldn't get down there to verify that these were bear tracks, but they were evidently quite recent, since it had snowed less than a week ago.  I doubt that they were a hiker's tracks -- I don't think that a human would dare to walk across rotting ice: 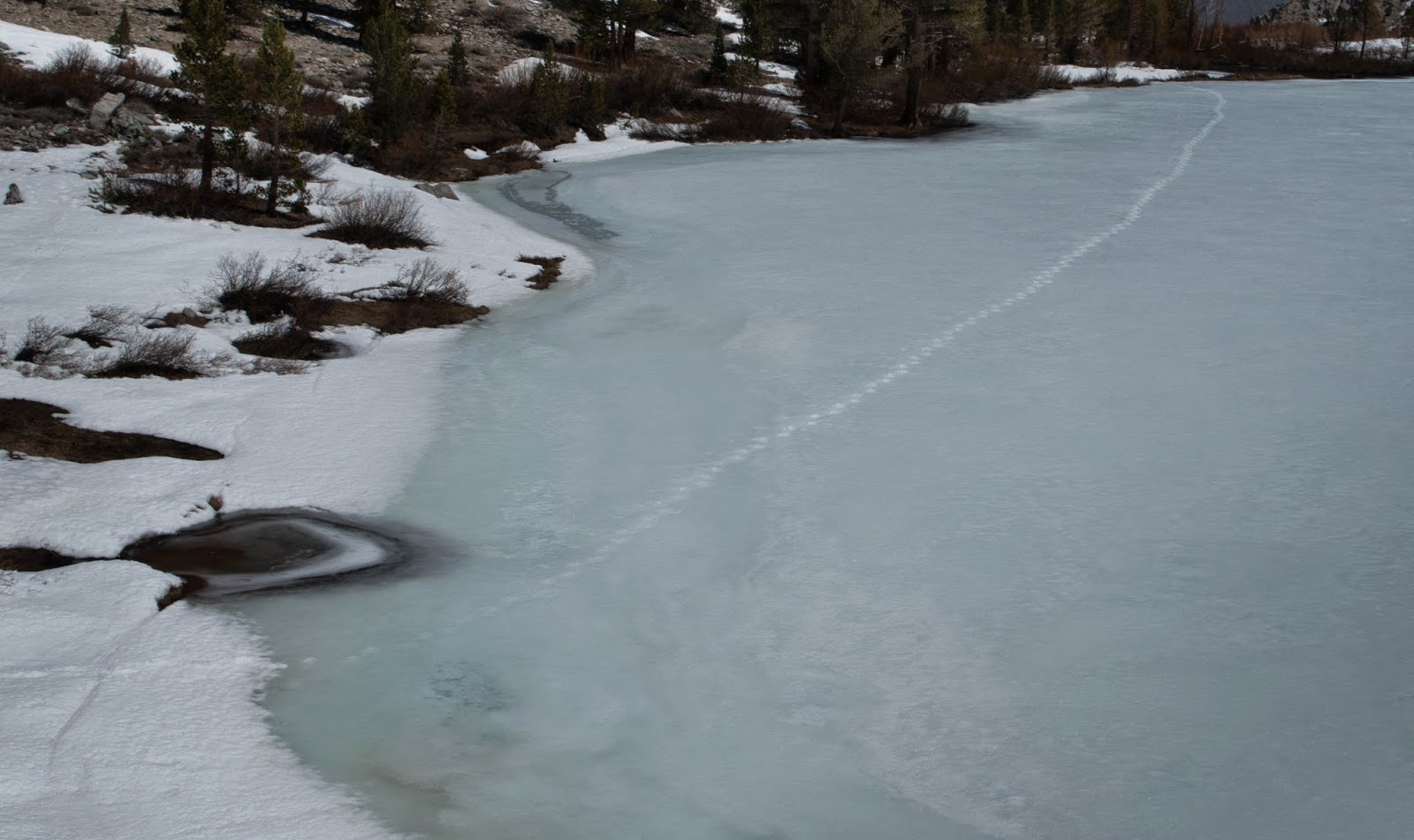 We took a very quick HD video panorama of the lake and the surrounding cliffs -- the rumbling noise is the wind hitting the microphone.  This may be worth watching in "full screen" mode, just to get the feel of the icy lake surrounded by jagged ridges:

Not too far past Gilbert Lake, we came to Flower Lake at about 10,500 feet -- if it's possible, the setting was even more dramatic: 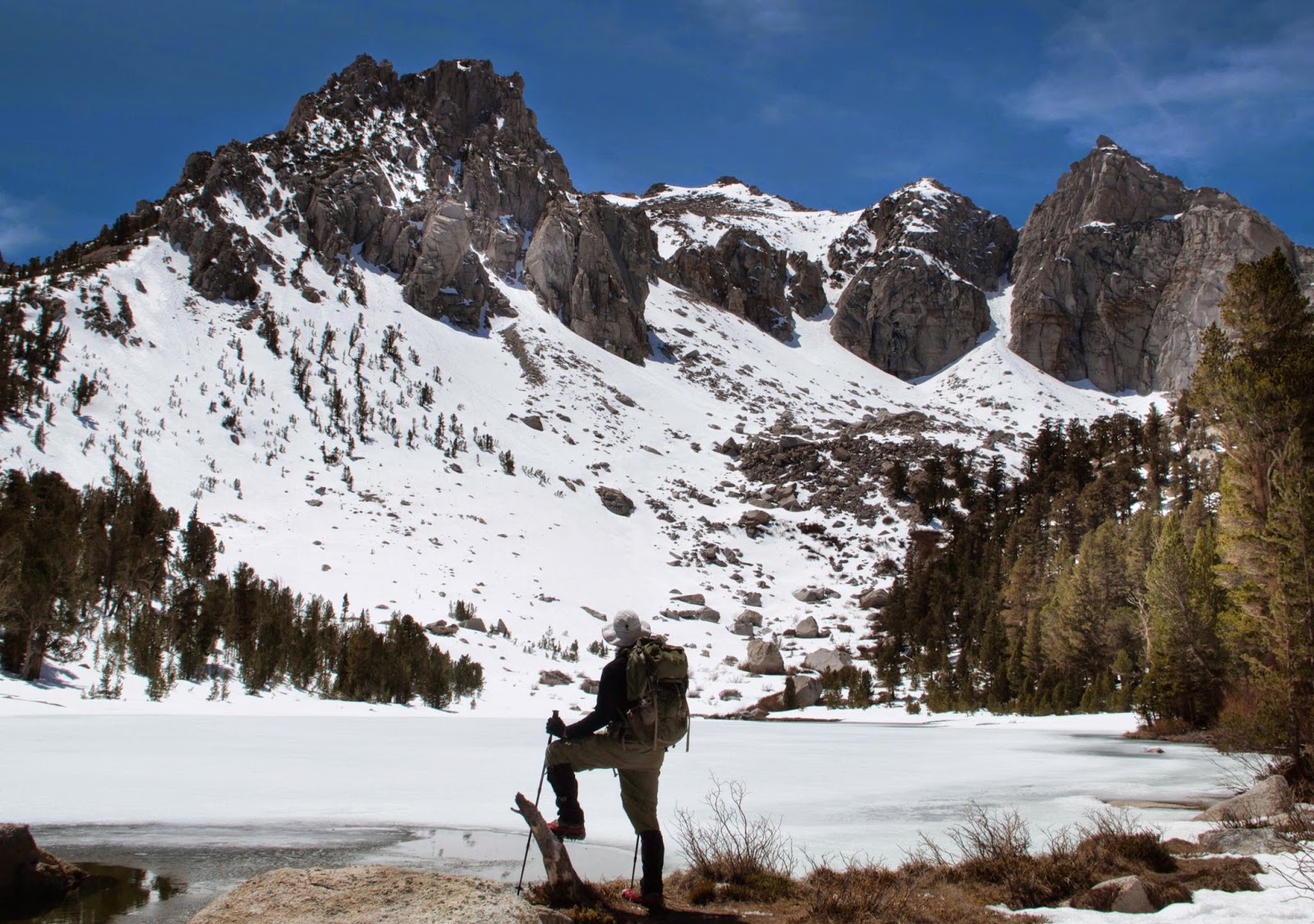 Just for fun (and because we still had a little time before we had to head down), we trudged up toward Kearsarge Pass, knowing we could not make it to the top; but at least we made it up to the treeline, at about 10,700 feet. The walls of the canyon all around us stretched up above 12,000 feet. I'm in the lower-left corner of this photo: 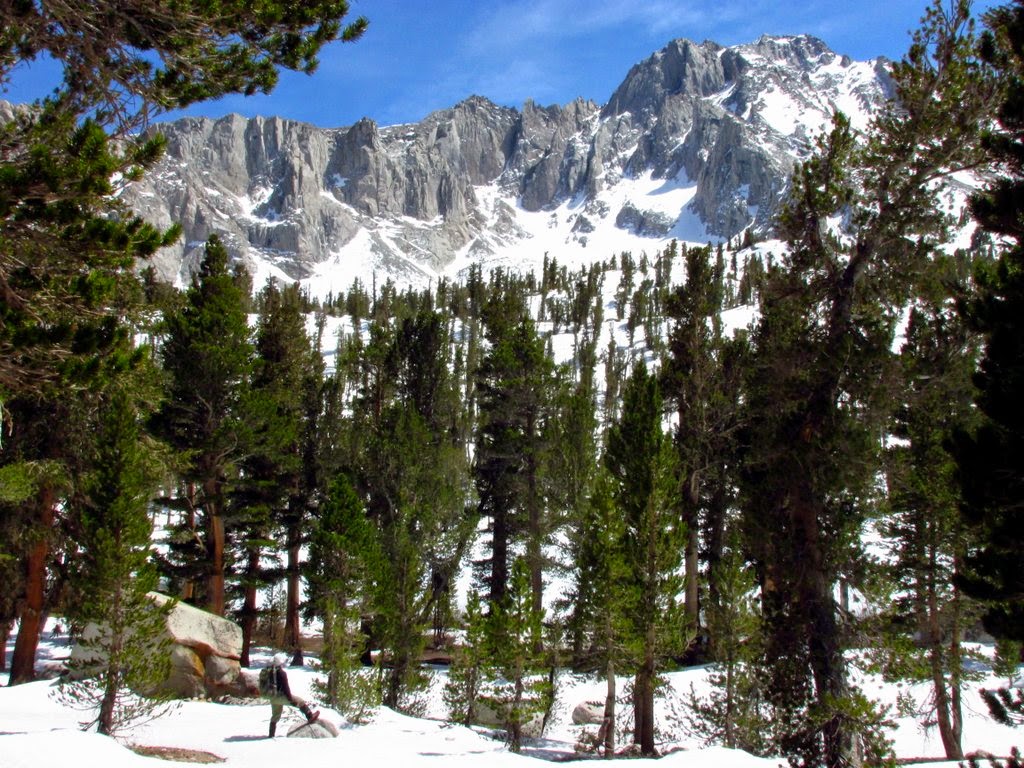 On our way back down, we came across a noisy cascade on Independence Creek: 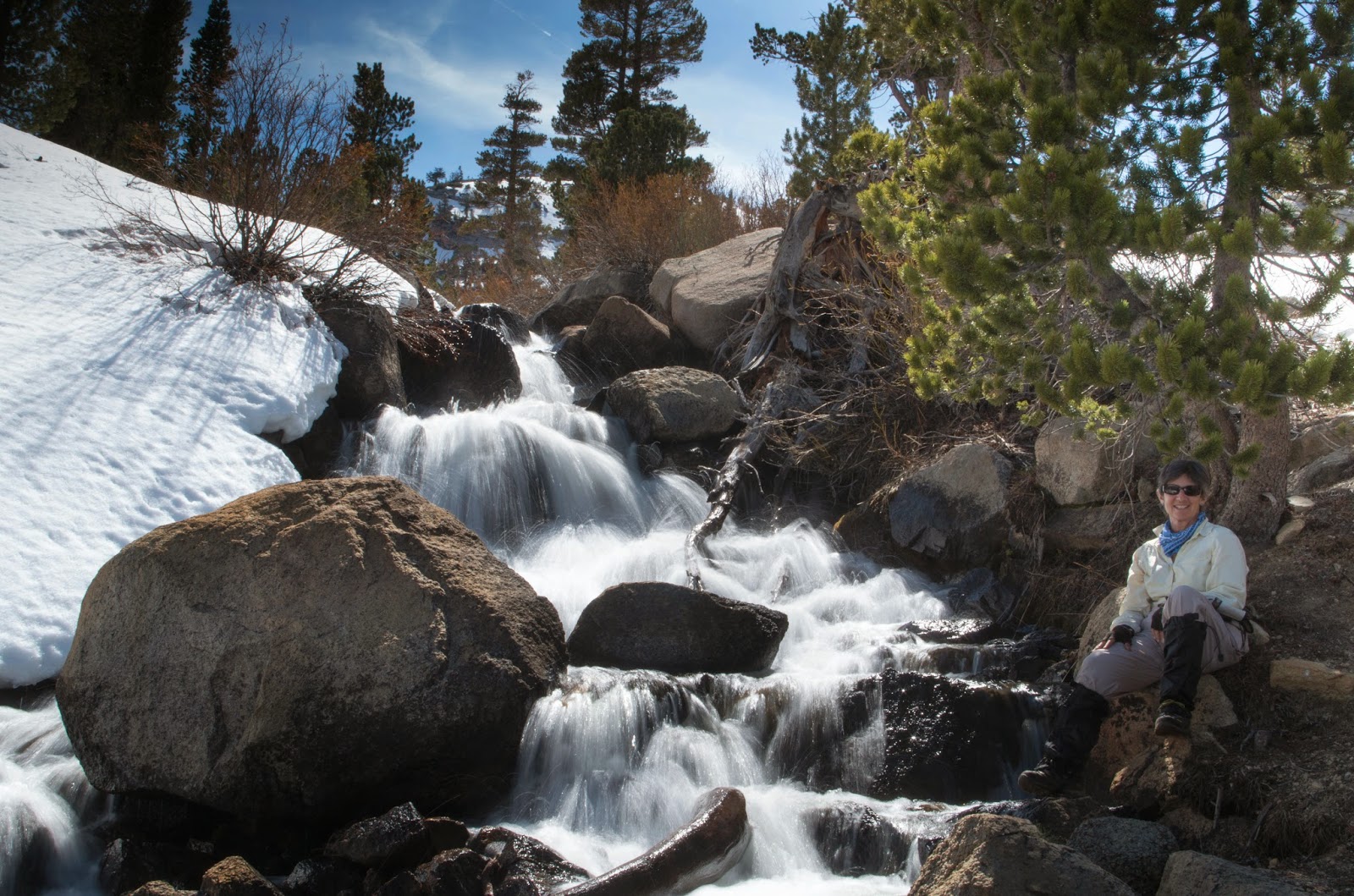 May 3:  We drove to Big Pine Canyon, someplace we've always wanted to explore. It was about an hour away from Lone Pine. We started up the North Fork trail, but we were a little disappointed by the scenery, in comparison to the spectacular Whitney and Kearsarge areas – how quickly we become spoiled!  So we cut back over to the South Fork of Big Pine Creek, hoping to get to the snowy "headwall" trail (above the cirque) to get a better view of the glaciers in the top right-hand corner of this picture: 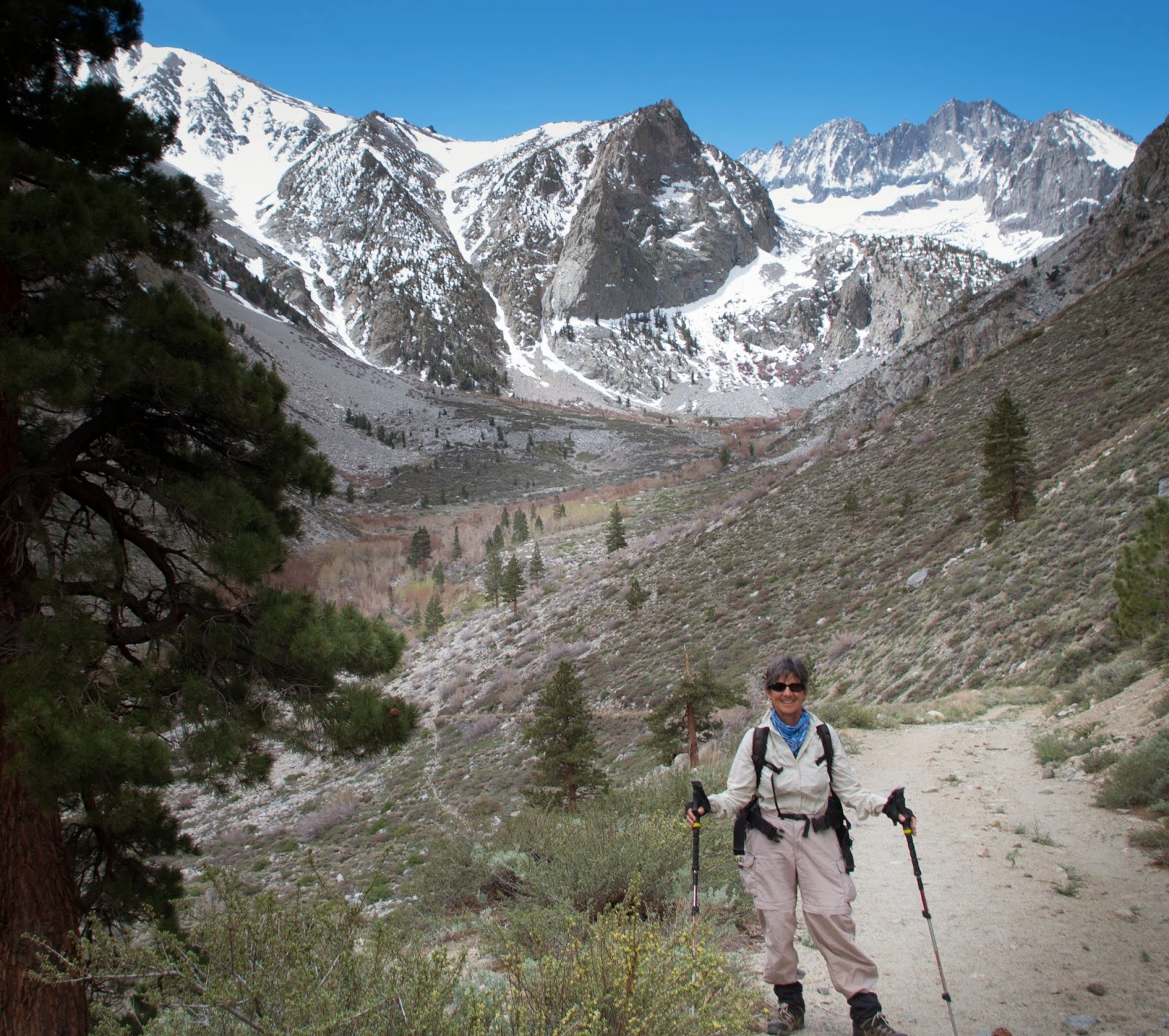 The trail was close to the creek, which was flowing pretty well with all of the snow melt: 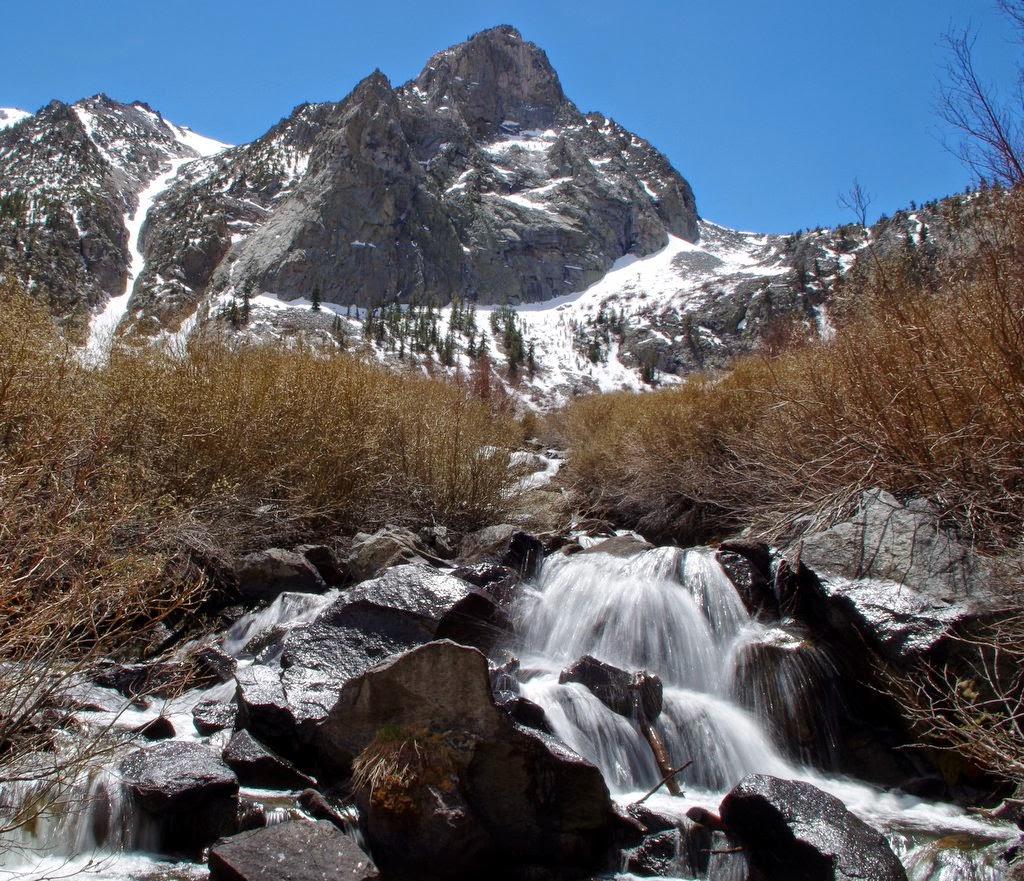 But when we finally got all the way up to the creek crossing near the headwall trail, the "bridge" (a log) had washed away, and there was no safe way to get across the creek.  Oh, well -- it was a nice hike, anyway.  We headed back down and cut over to the base of First Falls, on the North Fork of the creek: 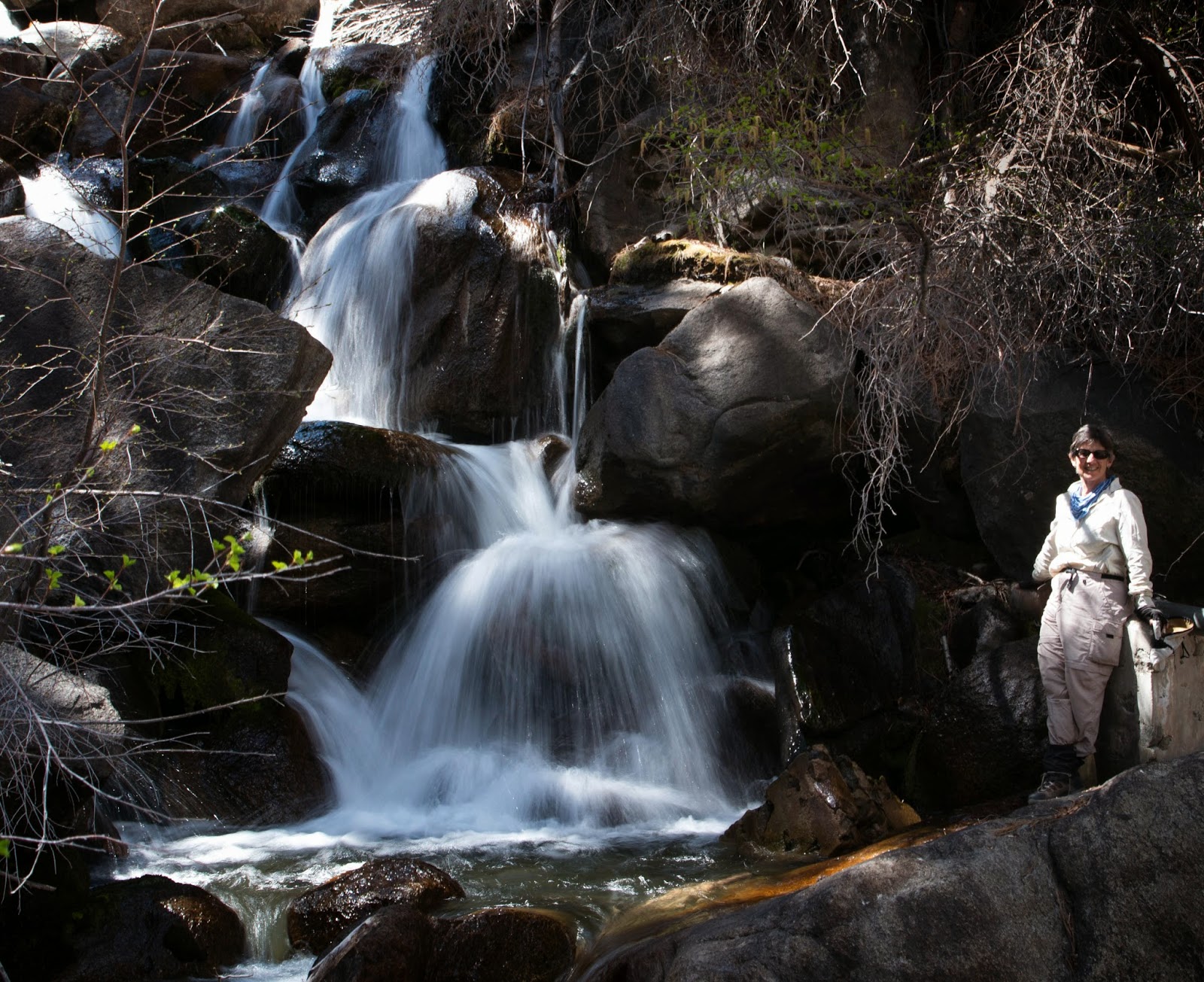 That evening, we took a short drive into the foothills to watch the sunset; as often happens in the evening, lenticular ice clouds formed in the lee of the Sierra crest. The dark jagged boulders in the foreground are part of the Alabama Hills, a small but rugged volcanic range that pokes up through the alluvial fan, just east of the Sierra: 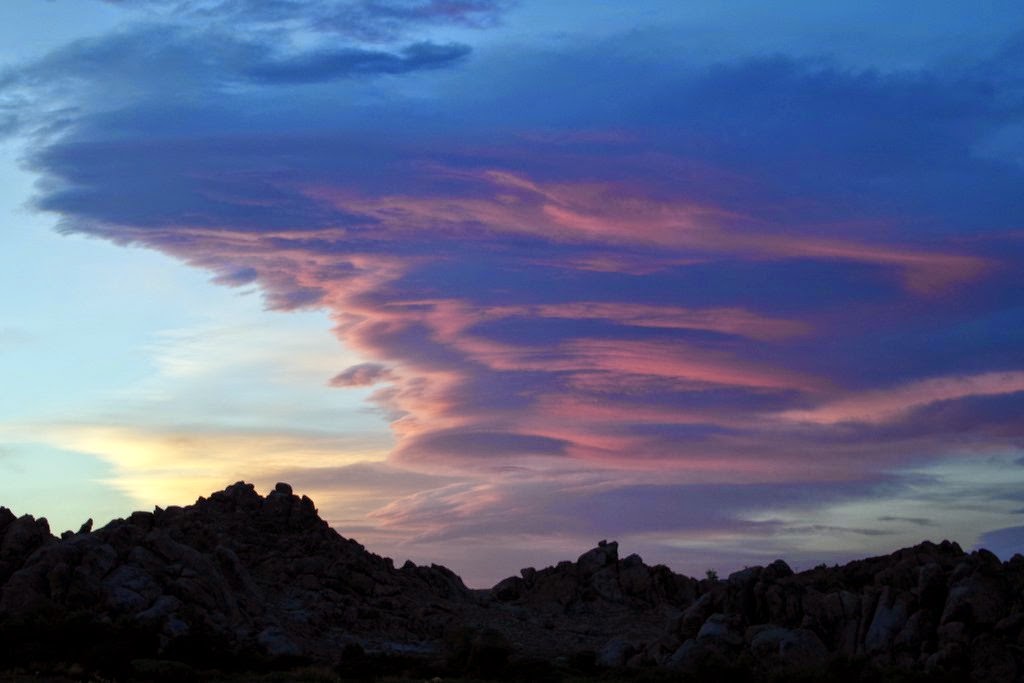