January 8:  Joshua Tree is just a three-hour drive from home. We got a space at Cottonwood Campground,  at the south end of the park, since we wanted to be as close as possible to La Quinta, so we could go see Sam and Corrine.  Next time, we would probably stay in the northern part of the park, which is more scenic.  At Cottonwood, the sites were fairly close together, and there was some noise from the other campers (generators and partying).  After getting a campsite, we headed off to La Quinta for a very pleasant evening.

January 9:  We decided to head toward the northern end of the park, which was a very long (and interesting) drive – about an hour. We took the Ryan Mountain Trail, a three-mile round-trip with about a thousand feet of climbing, on a good trail.  Thankfully, it was a breezy and cool day, with great visibility -- the hills in the far distance were about 50 miles away: 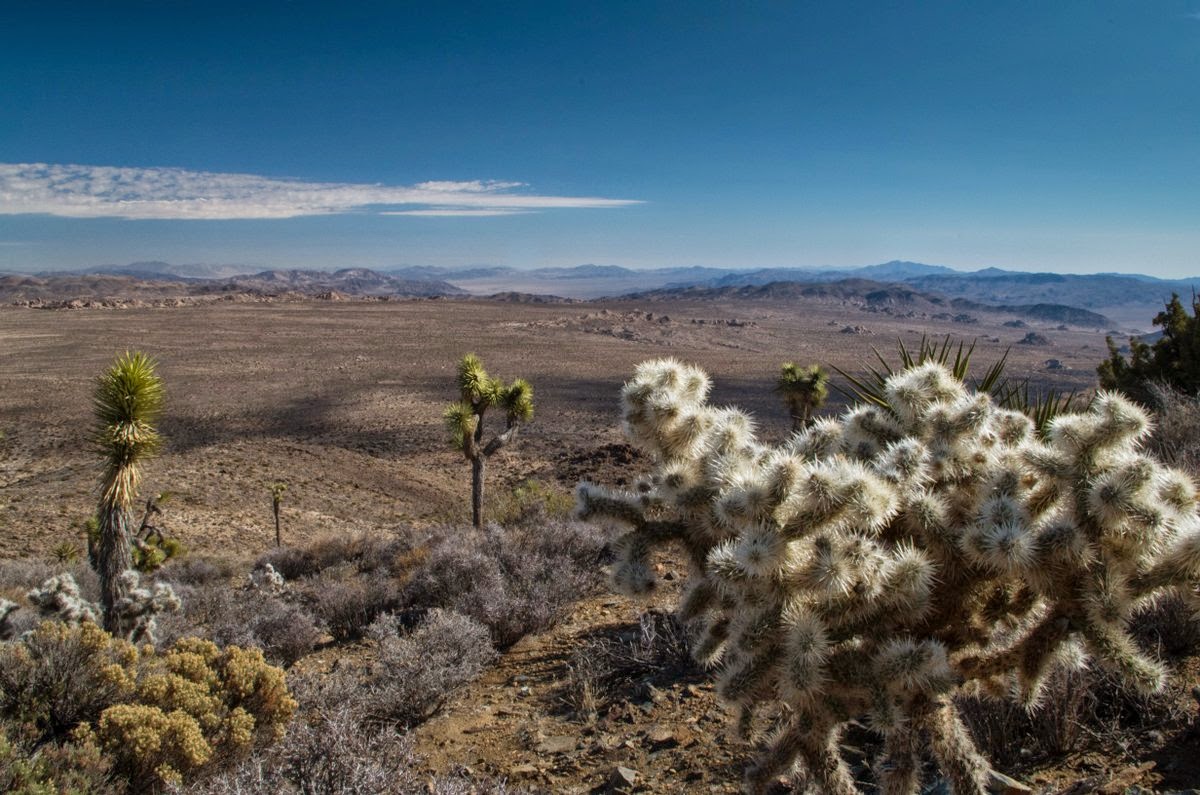 Along the trail, there was a lot of silver cholla. The spines seemed to collect the sunlight and re-radiate it, like fiber-optic spindles: 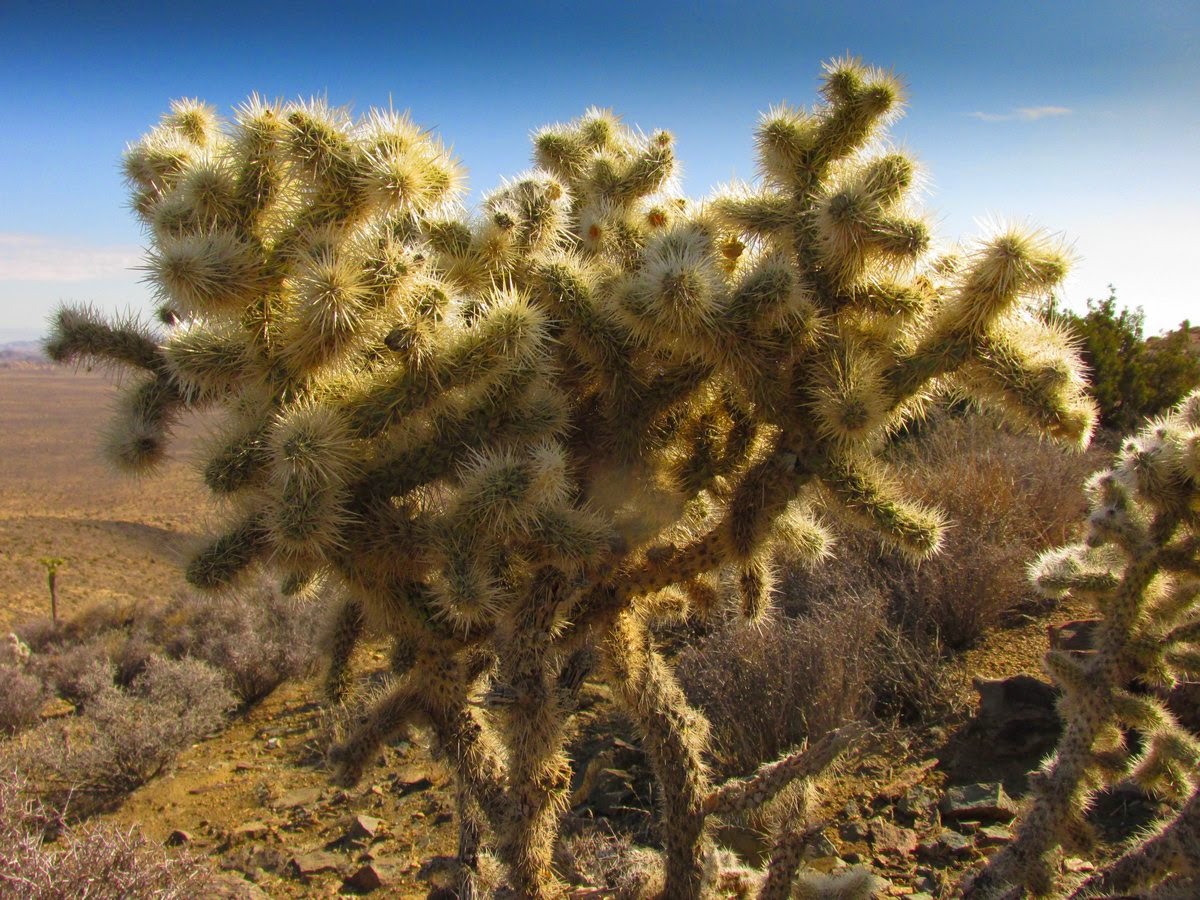 From the trail, we could look down on the "Wonderland of Rocks" in the valley far below.  These boulder piles started as monolithic granitic intrusions, far below the surface. The "overburden" later eroded, revealing the buried monoliths, which then fragmented into these huge mounds of boulders.  Most of these piles are several hundred feet high: 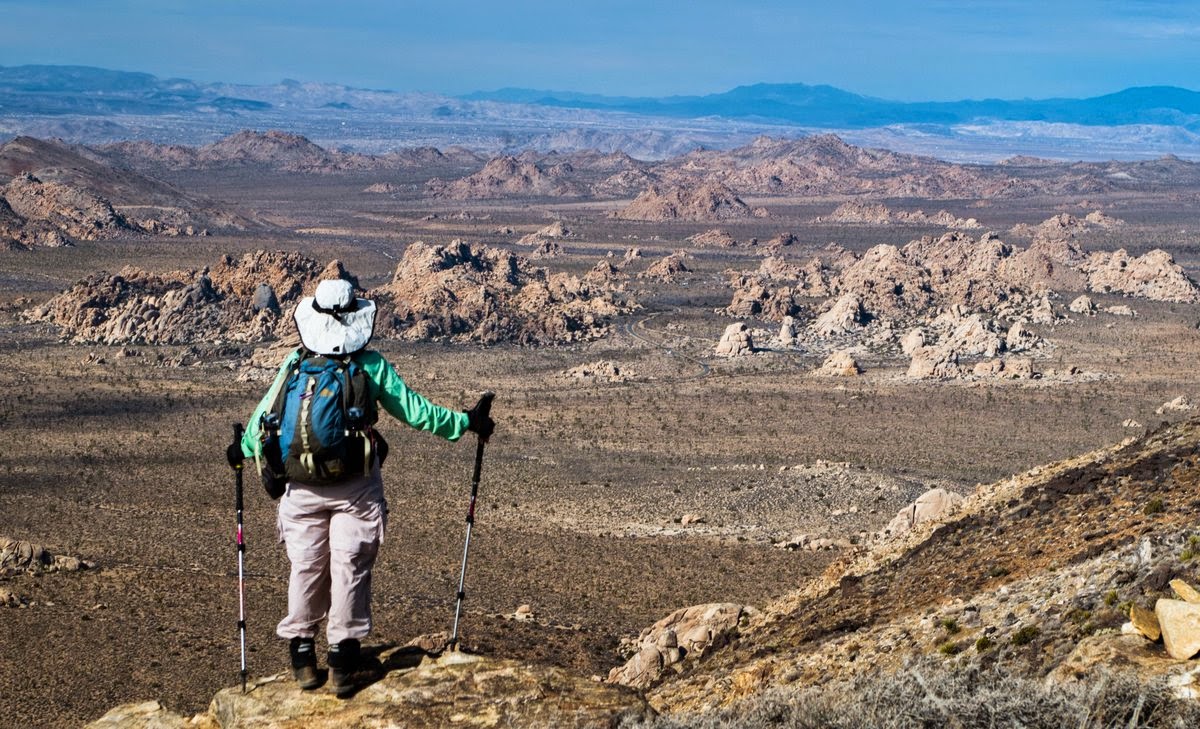 After Ryan Mountain, we headed over to the Hidden Valley area. Felice wanted to make sure that we got a shot of the iconic Joshua trees – this specimen is probably 25 feet high: 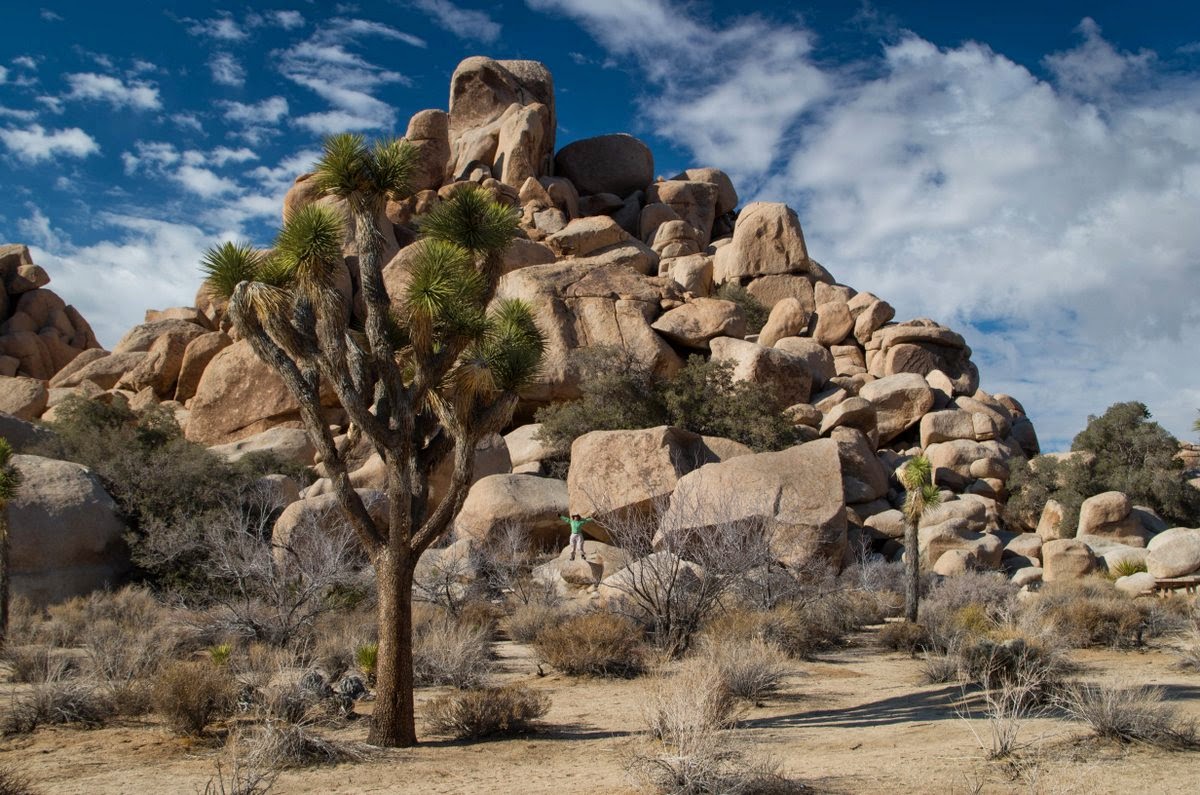 We took the Hidden Valley Loop Trail and wandered around on the rocks: 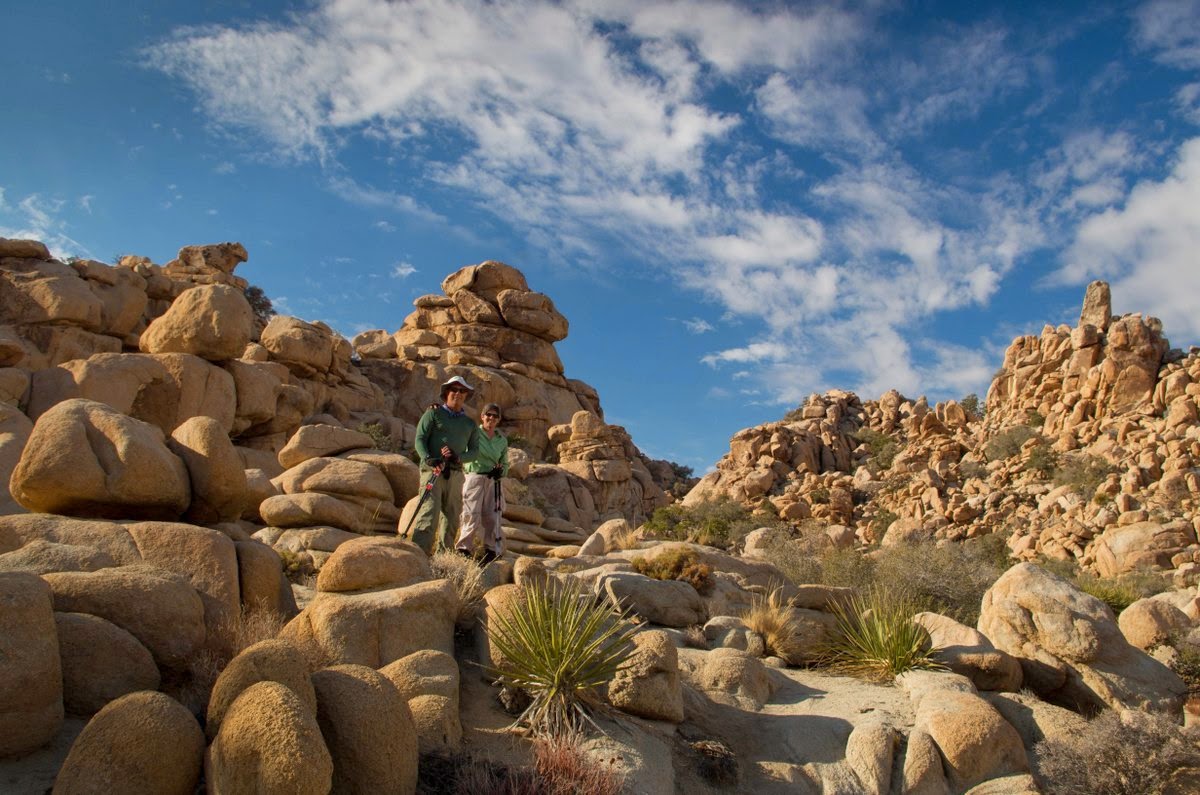 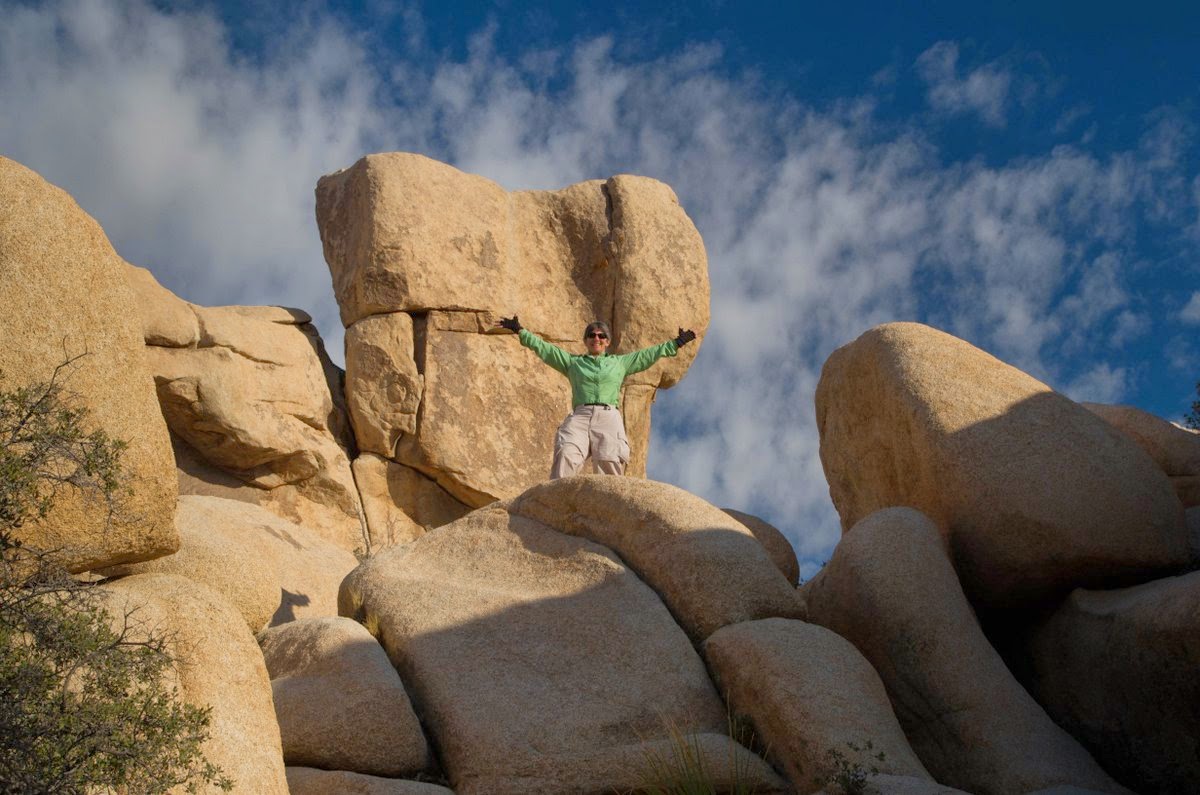 There were quite a few rock climbers; in fact, there were a lot of people, especially for a non-holiday Friday. We also ran into a French film crew working on a commercial for McDonald's of France.  (Presumably, they serve American Fries.)  Late that afternoon, we stopped at Skull Rock: 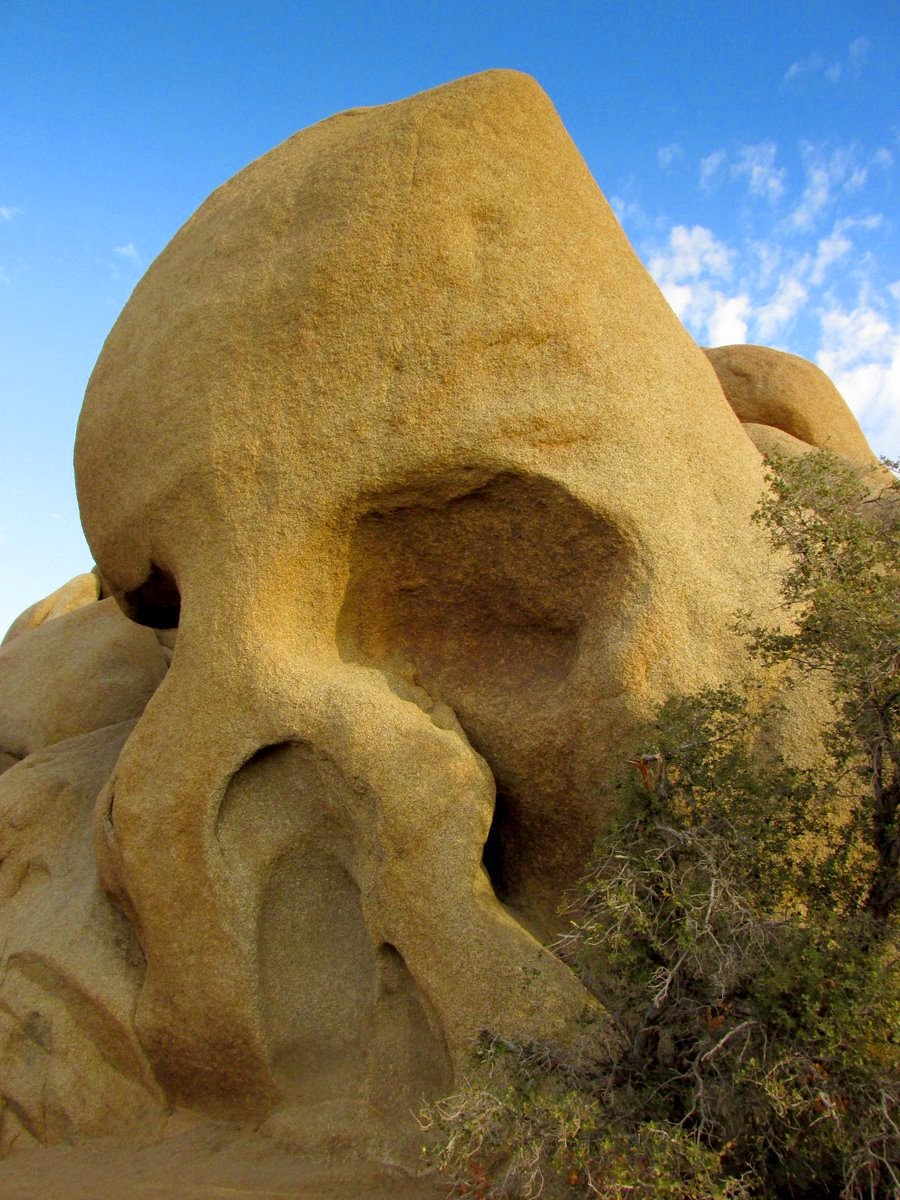 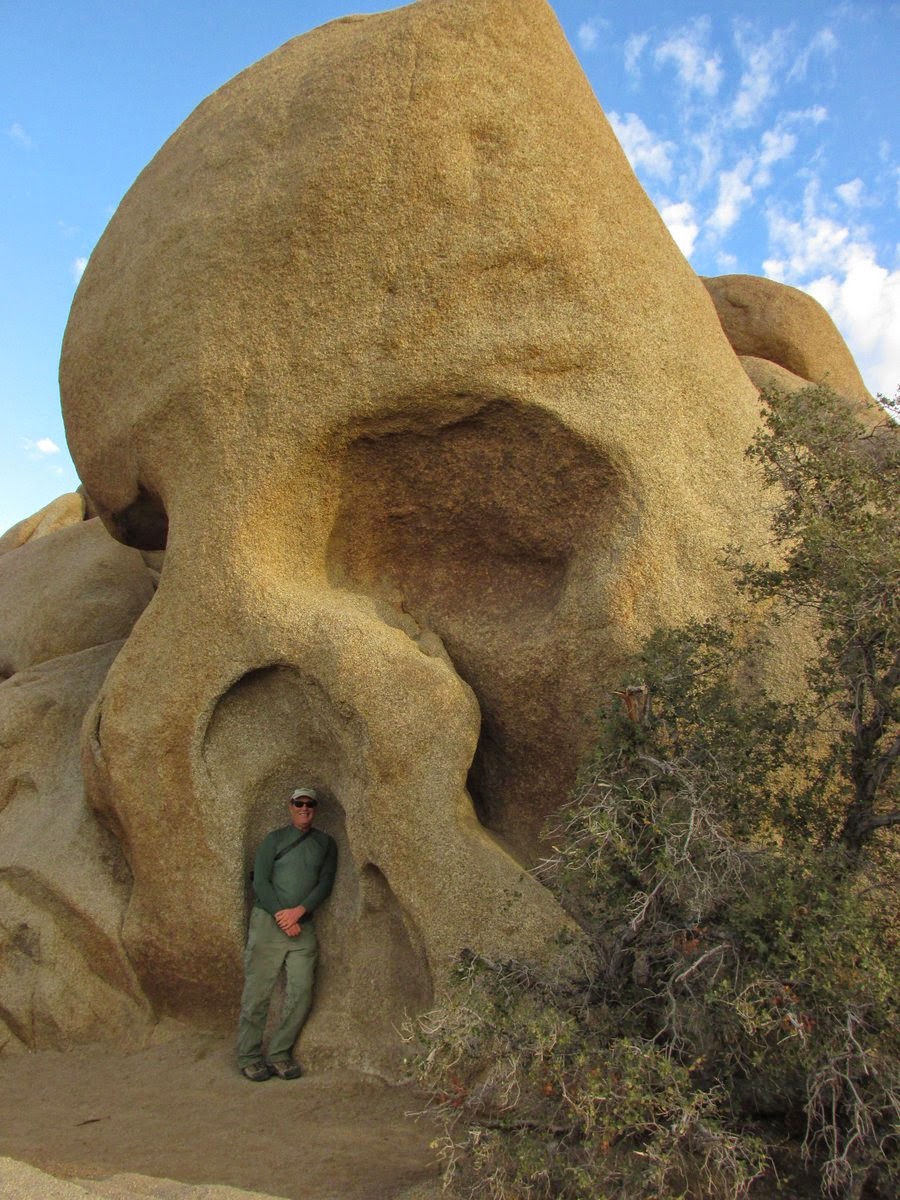 The Jumbo Rocks area was nearby – we did some more very gentle climbing.  The texture of the coarse rock was perfect for "bouldering," very rough and "grippy," unlike the smoother granite in the Sierra: 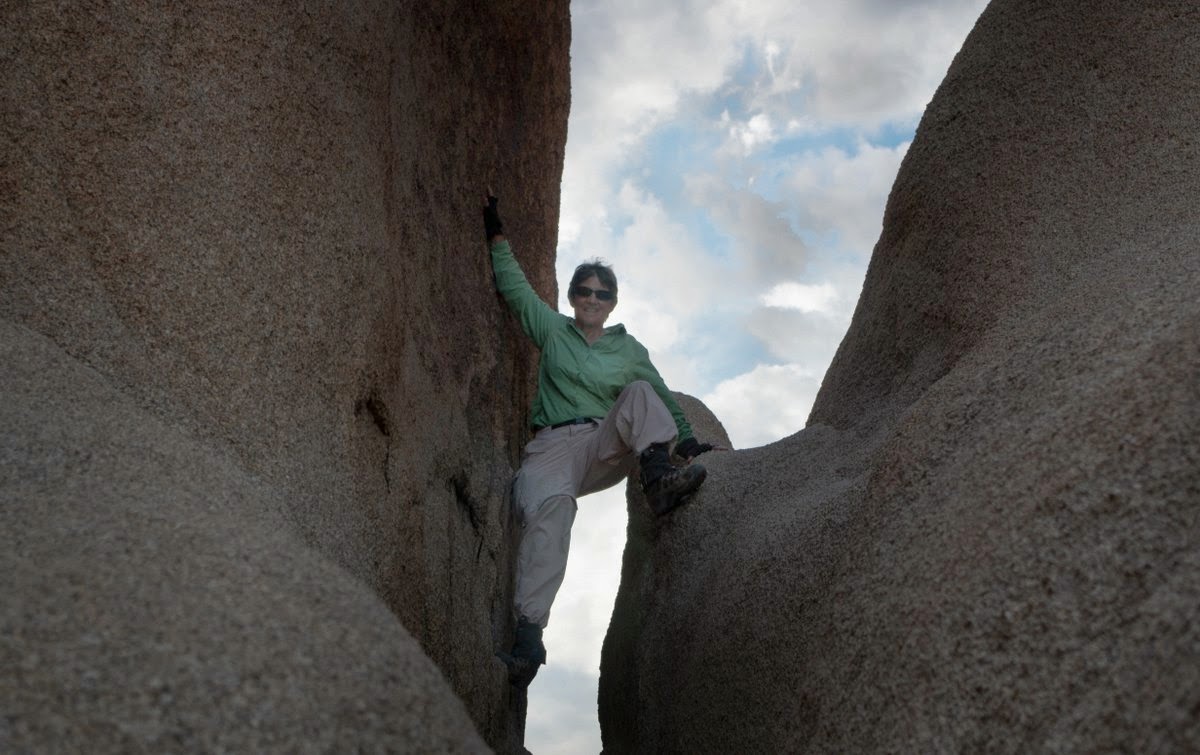 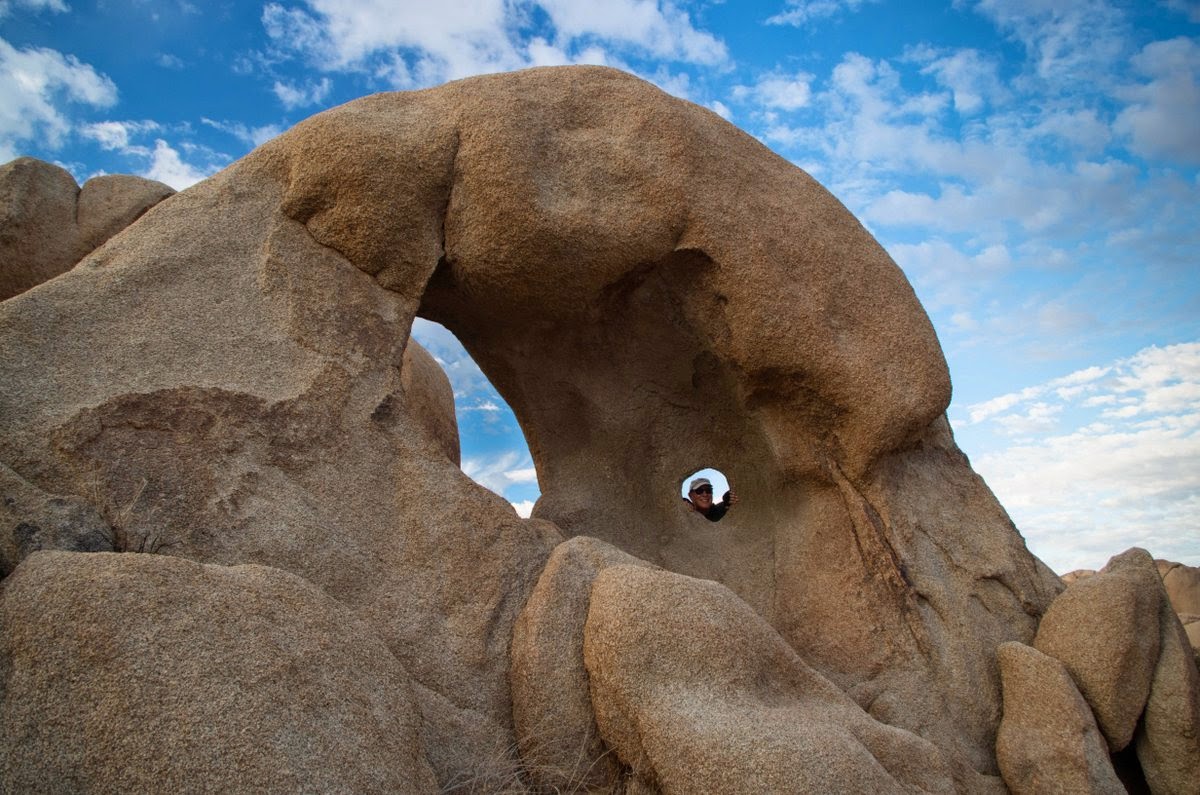 That evening, we were treated to an excellent sunset: 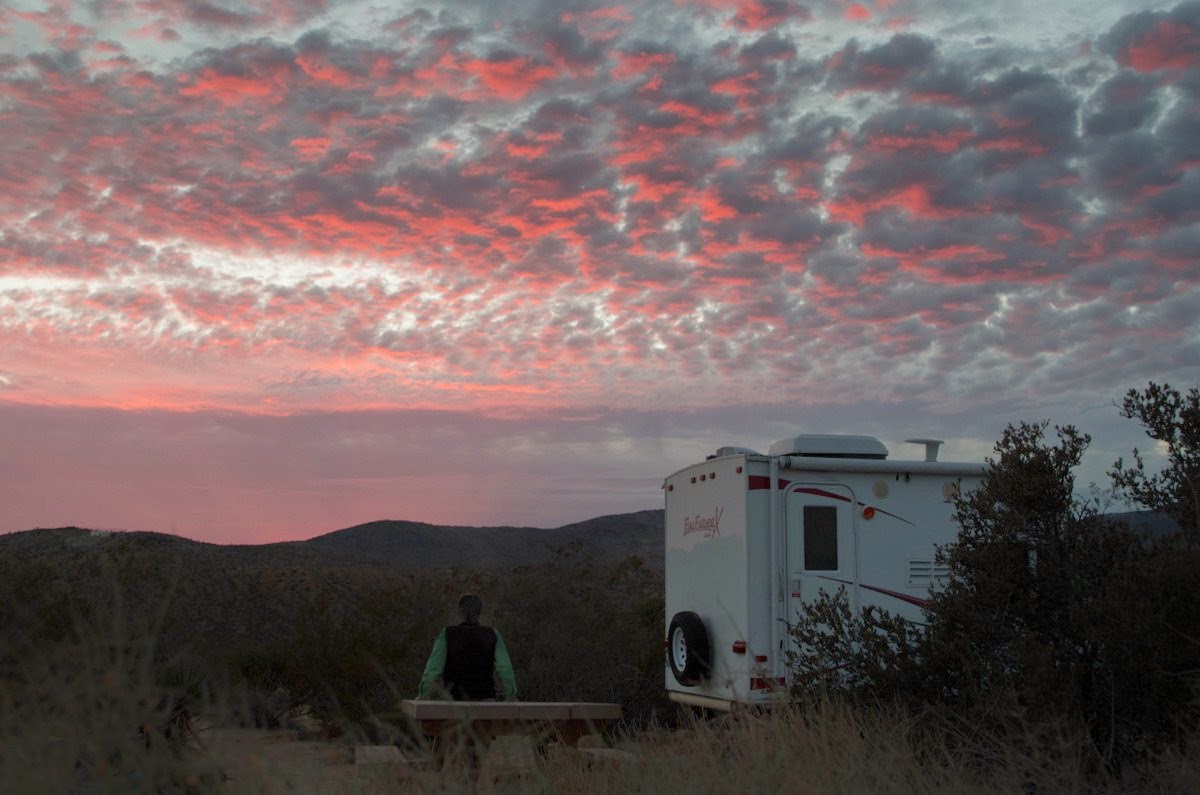 The good news is that the clouds reflected the sunset.  The bad news is that they blocked the stars at night.  We had come to Joshua Tree in part because Comet Lovejoy was supposed to be visible -- but we had cloudy skies all three nights.

From the trailhead near Cottonwood Campground, we hiked to the Lost Palms Oasis, a round-trip of roughly 8 miles on a sandy surface.  Even though the hike was moderately strenuous, there were a surprising number of people on the trail.

This is a backlit silver cholla: 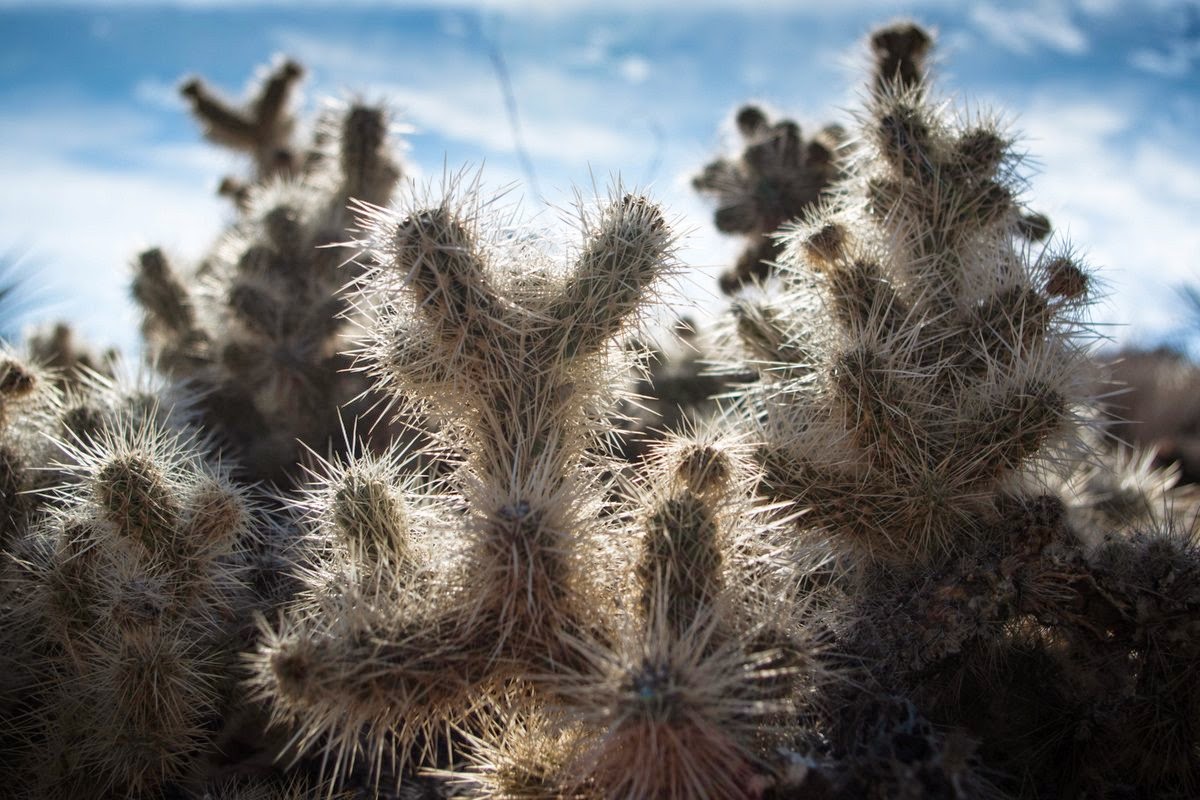 Every so often, we ran across a reddish barrel cactus -- this one was about 18 inches high: 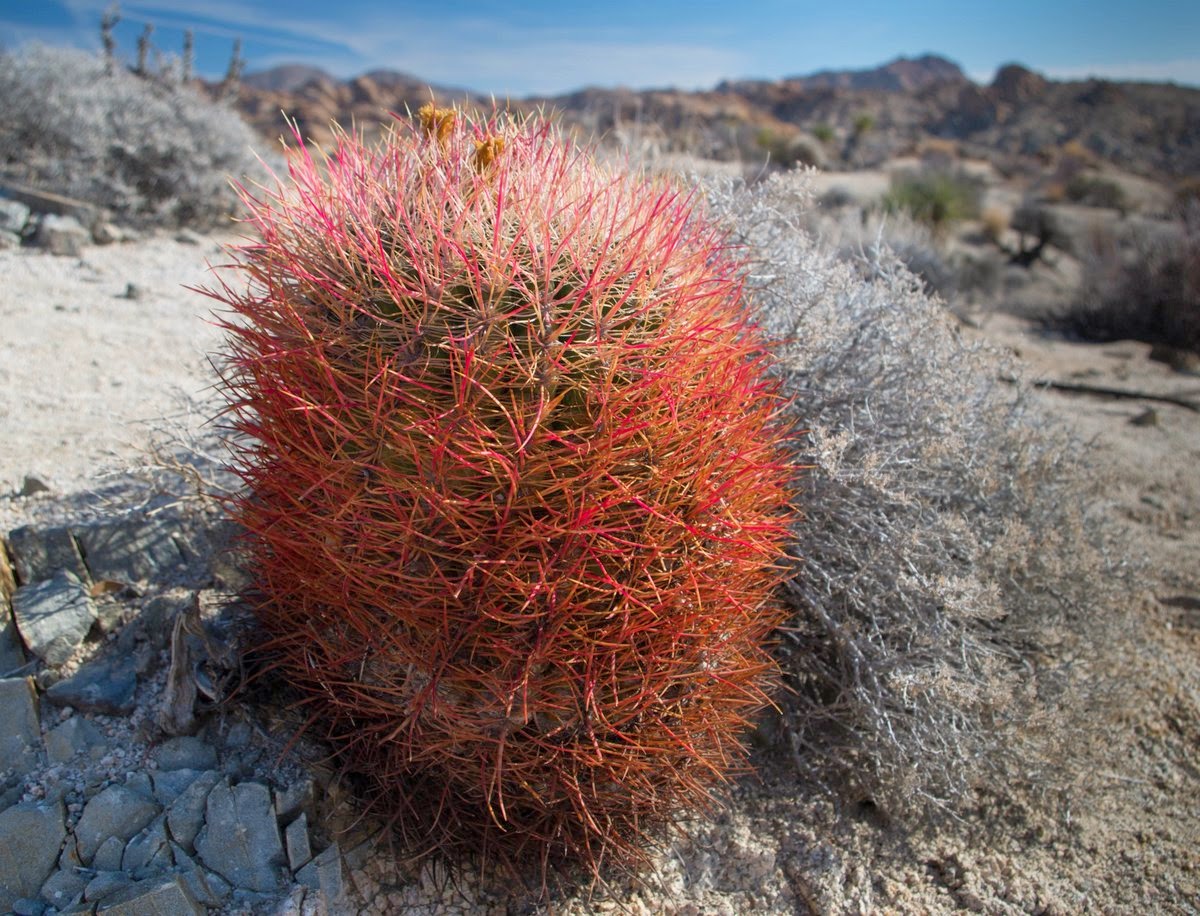 We also saw another type of cholla, called a "pencil cholla” -- the stems were very intricately linked, like a diabolical toy: 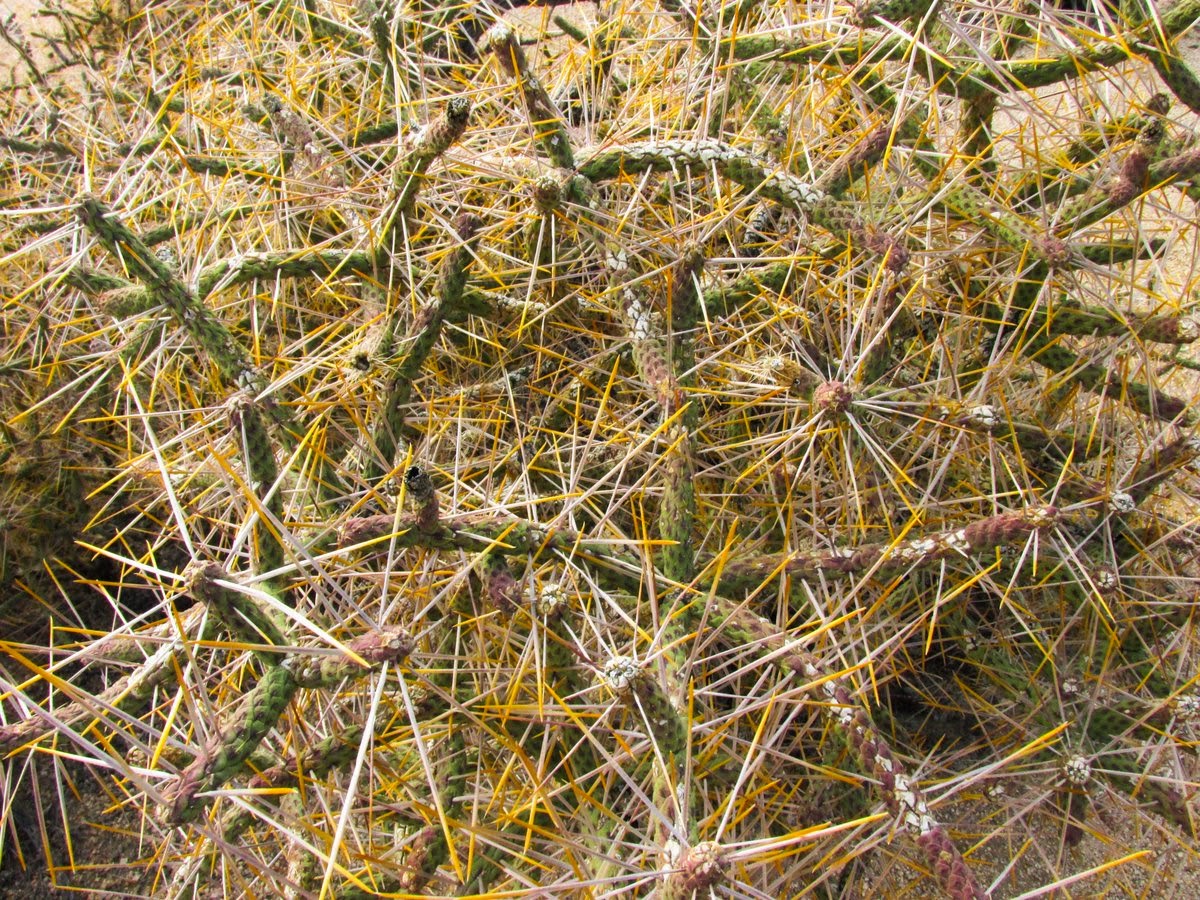 After a long hike, we spotted the palm trees down in a canyon far below us –  a perfect opportunity for a “boot shot:” 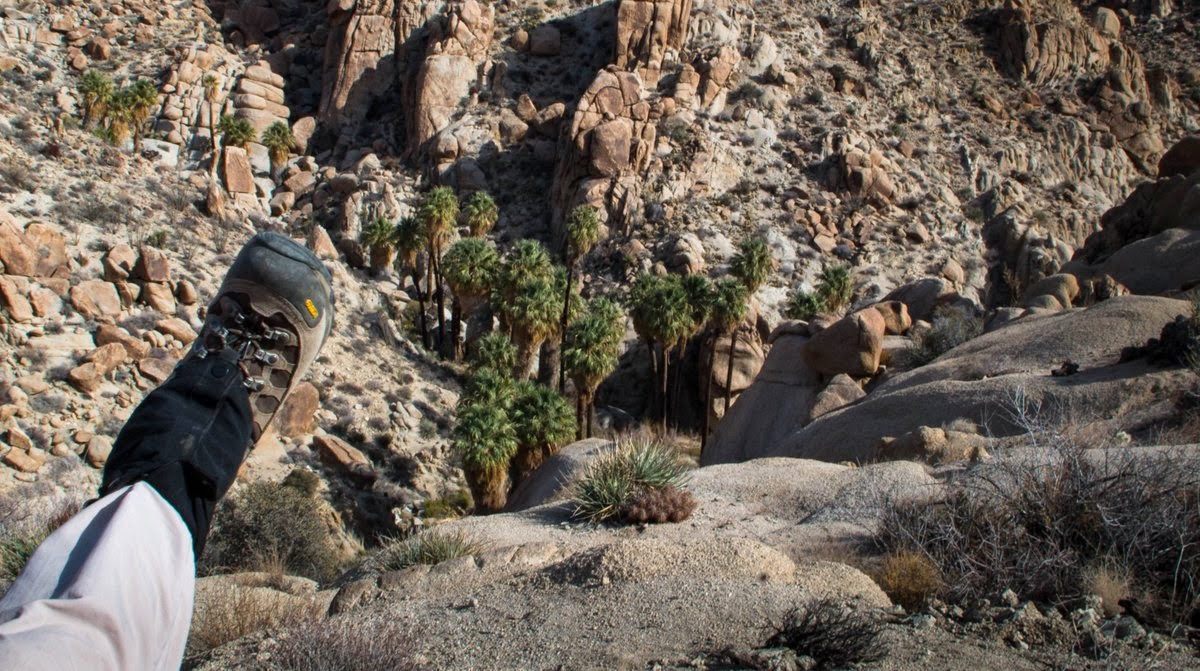 We hiked down to the palm trees, but the oasis was a bit of a disappointment. There was no water in the canyon, and it was not easy to clamber up and down the streambed amongst the tangle of fallen fronds .  The palm trees were very tall -- probably 50 feet -- but they did not seem very exotic to us, since palm trees are everywhere in Southern California.

That evening provided us with another great sunset; but I decided not to go to the effort of getting the DSLR and the tripod.  Felice just grabbed her iPhone, I stuck my foot into the shot, and that was good enough -- it was a pleasure to watch this from the comfort of the trailer, through the side window: