November 11:   The forecast for the coming week was fairly mild, with lows in June Lake in the high 20s, and no storms approaching.  So off we went for a week of high country camping!  We scored a lovely boondocking site at around 7500 feet, not far from Tioga Pass; the goal was to "commute" into  the Tuolumne Meadows area of Yosemite for some cold-weather hiking without the summer crowds and bugs.  (The campgrounds up in the Tioga area were all closed, even though the road was still open.)

After we got the campsite set up in the late afternoon, we noticed that it was getting kind of chilly.  Real chilly.  Downright cold.  At around 9 PM, I went out to the truck and saw that the thermometer read 12 degrees Fahrenheit.  Uh-oh.

I hooked up my handy-dandy DIY hot water recirculating tube (which runs from the kitchen faucet, out through the outside shower compartment, and into the freshwater fill port).  The point of this device is to keep the outlet pipe (underneath the fresh water tank) from freezing; that little pipe is the most vulnerable component.  I ran the hot water tube a couple of times during the night.  But when I tried to run it at 4 AM, nothing happened.  Frozen.  Uh-oh.

November 12:  That morning, when we woke up, the interior of the trailer was at about 28 degrees.  Uh-oh.  Our five auxiliary jerry cans, each filled with six gallons of fresh water, sat on the ground outside the trailer, frozen.  Uh-oh.

After breakfast, we made a plan:  we would go hiking, despite the frozen pipes.   We would put the jerry cans into the sunlight, hoping that they would thaw.  We would put our stainless steel mirror (a recent addition to our solar panel equipment) under the trailer, hoping to focus the sunlight up onto the frozen pipe.  In the afternoon, we would make a "stay or go" decision.  If everything were still frozen, we would have to drive down to Bishop and stay in an RV park, an ignominious fate.  (Spoiler alert: everything thawed and we stayed!)

The drive to the Gaylor Lakes trailhead (at around 10,000 feet) took only about half an hour -- there was no line at the kiosk at the eastern entrance to Yosemite. Surprisingly, there were a few other cars in the trailhead parking lot, but we saw almost no one on our hike.

The first part of the hike goes straight up the hill; at the crest, Middle Gaylor Lake comes into view.  It was half-frozen -- in this shot, I am pointing at the boundary between the ice and the water: 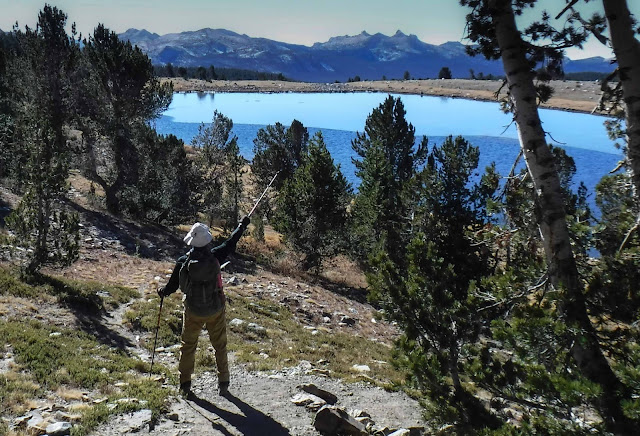 The mountains surrounding the lake were reflected in the ice.  The reflection was not quite as good as in ultra-calm water but better than in wind-ruffled water: 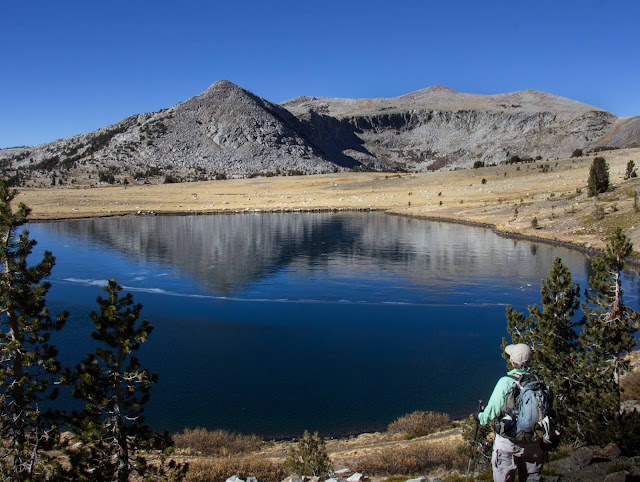 Felice loves to throw stuff onto the ice and watch it spin around:


Because the area around the lakes is a broad rolling plateau (very unusual in glaciated terrain!), we hiked off-trail cross-country to Lower Gaylor Lake.  The route-finding was fun, but the little frozen lake was nothing special: 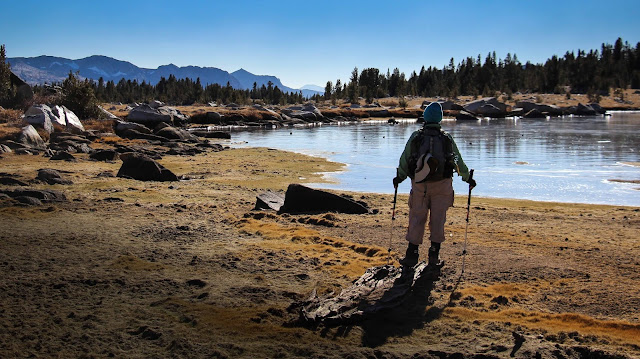 Note that the southwestern side of the lake, the outlet side, is formed by a terminal moraine, a row of big rocks that extended across the snout of the glacier and were dropped in place when the glacier retreated.

The whole plateau was empty --  exactly what we were hoping for:

Wind-driven spray had formed ice on the rocks around the lake: 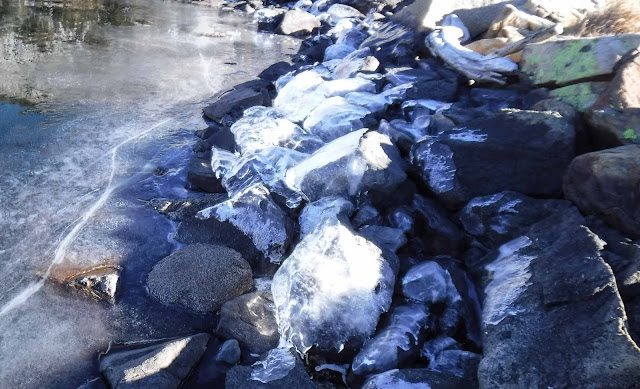 From the ridge dividing the lakes basin from Tioga Pass, we could see the whole Dana Fork/Parker Pass Creek drainage, leading up to Mono Pass and Parker Pass:

That evening, back at the trailer, we turned the handle of the faucet -- success!!  Running water!  A hot shower!  No need to drive down to Bishop!  Now what to do to avoid a repeat of the Ice Capades?

Felice suggested that we hook up our old heating pad (drawing about 50 watts, maximum) to the spare battery, wrapping the heating pad around the freeze-prone pipe.  I used a spare sheet of Reflectix to insulate the makeshift wilderness pipe warmer: 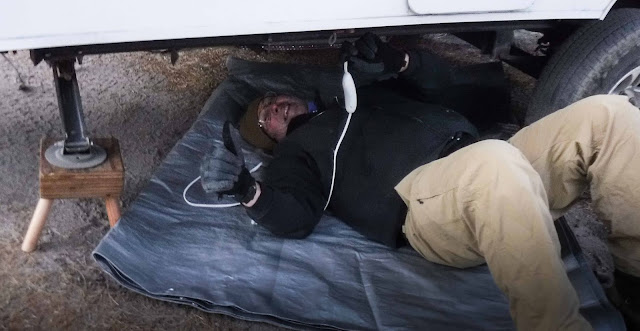 (It later turns out that the heating pad had an automatic cut-off safety switch, after around 90 minutes of use.  So we doubt that it really accomplished much; nevertheless, we enjoyed a pleasant, temporary, and spurious sense of clever self-sufficiency.)

The jerry cans had thawed out, too, so we brought two of them into the trailer with us (one for drinking water and one for washing).  We also had to bring in all of our electronic devices instead of leaving them in the truck, along with our cooler.  So the tiny trailer got a little cozier with all of these refugees huddled in the front "hallway:" 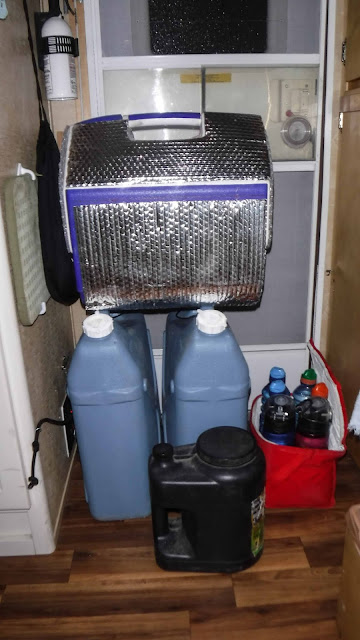 We also ran the hot water recirculator as often as we could, to bring up the temperature of the water in the tank.  I got up every two hours during the night to run it.  No big deal, since I get up pretty often anyway, but it was darn cold inside the trailer, waiting for the cycle to finish.

November 13:  The weather was semi-cloudy, so we decided not to take a view hike and to visit Tuolumne Falls instead.  That trail is usually hot, dusty, and crowded with both people and pack animals.  Not this time!  We saw one other hiker during six hours on the trail, which starts near Lembert Dome: 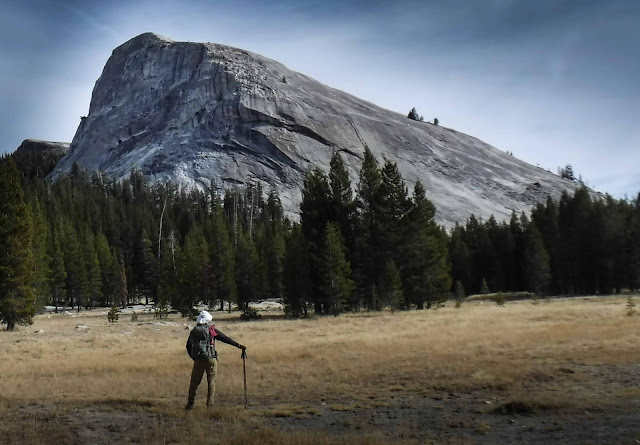 The trail, which is mostly flat and sandy, follows the course of the Tuolumne River.  It was completely silent -- no wind, no people, no water gurgling in the frozen river, with a cold dull gray sky to add to the feeling of desolation: 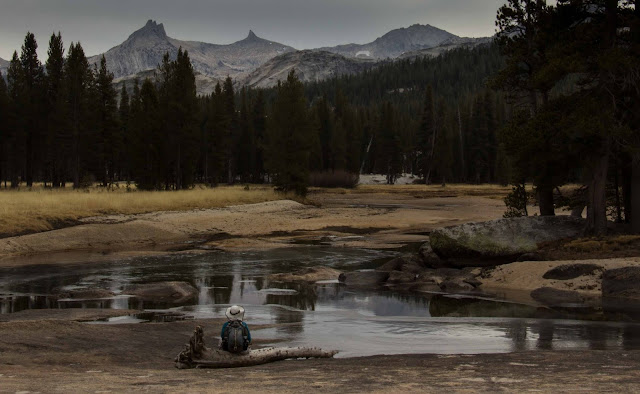 The falls were still flowing, but there was a thick coating of ice on the walls of the canyon: 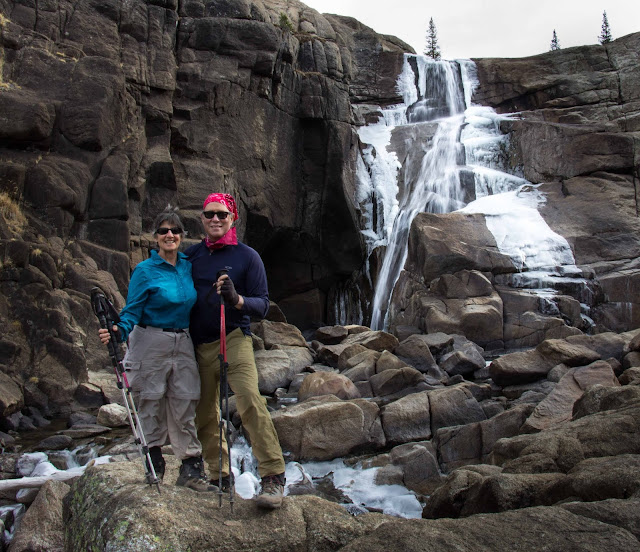 The cascades were also mostly frozen: 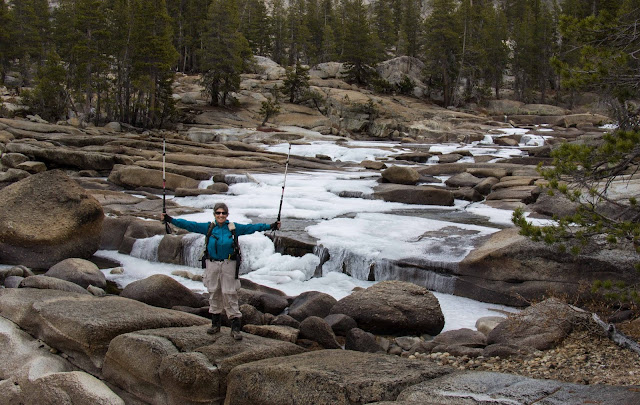 November 14:  A beautiful morning, so of course we had to get a shot of the trailer in its isolated campsite.  Those are huge Jeffreys pine trees, very similar to Ponderosa pines.  I'm pretty sure that's Mt. Lewis in the background, at over 12,000 feet: 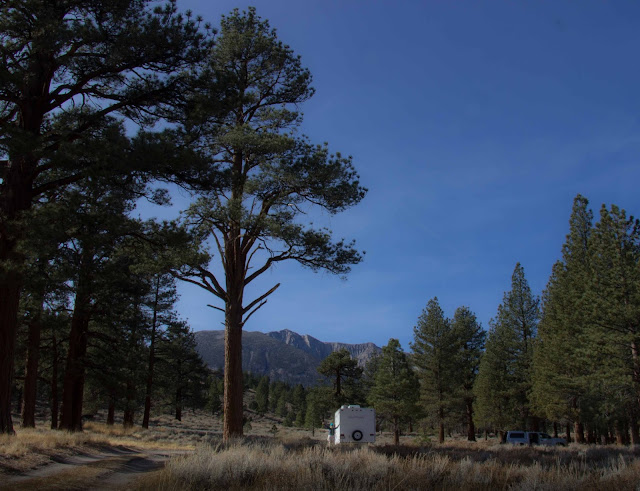 We drove up to the Lembert Dome trailhead, first stopping off at frozen Dog Lake: 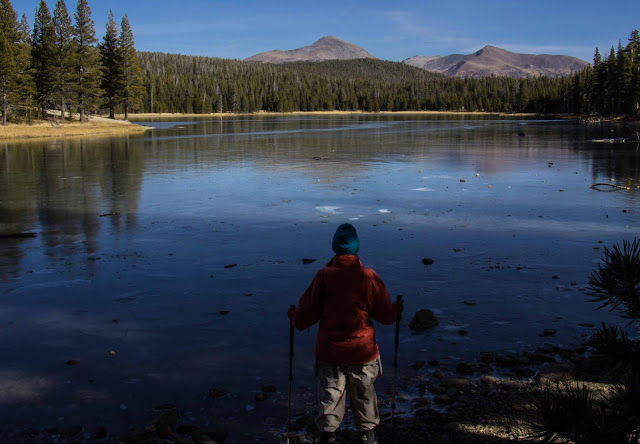 Climbing Lembert Dome was a little dicey -- there was no ice, but there are some steep parts, and we had to trust that the high-traction soles on our hiking boots would do the job.  The visibility was good to the east but not great to the west -- some of the smoke from the terrible Camp fire was weaving its way up from the San Joaquin Valley.  I think that Lyell Glacier is in the top center of this shot:

We had the top of the dome mostly to ourselves, which is really rare.  Cathedral Peak is on the left:

The whole dome was shaped by a huge glacier -- it must have been thousands of feet thick.  There are still some patches of glacial polish near the summit of the dome: 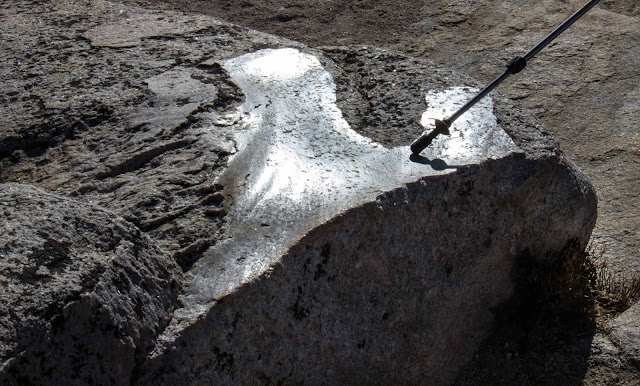 We got back to the truck just before sundown: 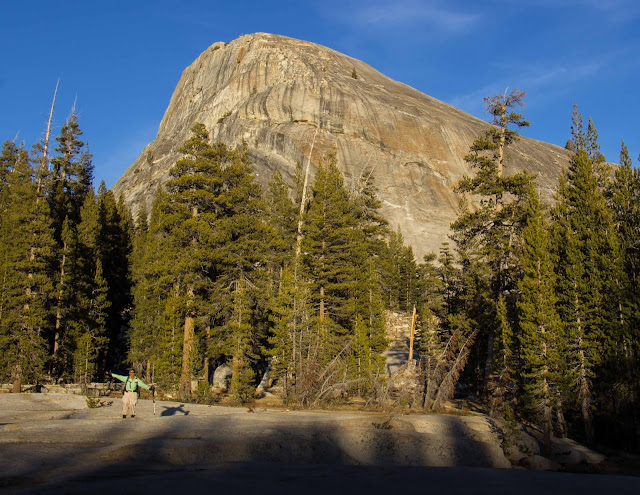 Back at the trailer, we added some fresh water to the tank.  I happened to notice that the plastic hot water recirculating tube had sagged down and had come into contact with the hot exhaust vent, melting one spot on the tube.  Uh-oh.  More wilderness repairs:  I finally got a chance to use my Flex Seal self-adhering silicone tape!  A few wraps around the tube, and problem solved.

November 15:  Another shot of the campsite on a cool, clear morning: 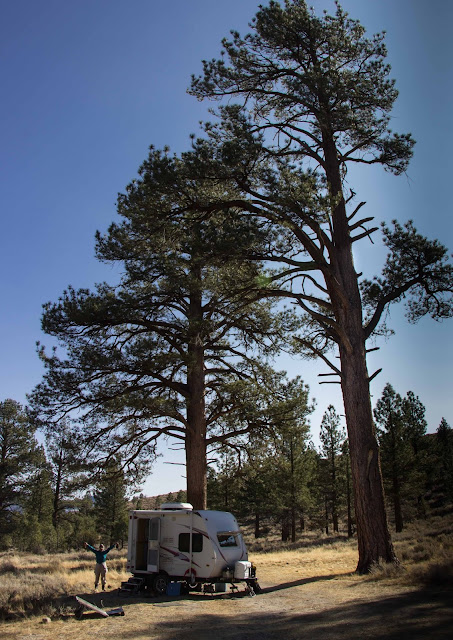 We drove up to the Mono Pass trailhead.  More emptiness -- we saw only two other people the whole day.  The first stream crossing, an area usually carpeted in wildflowers, was just ice: 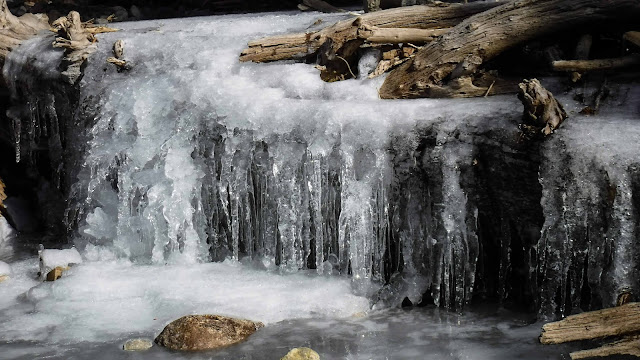 We passed the ruins of a mining cabin -- those are notched lap joints: 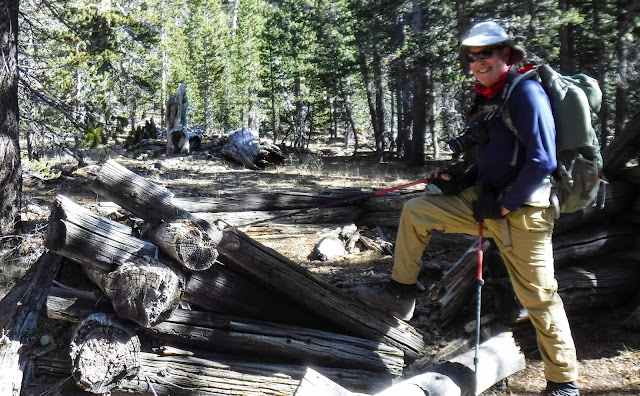 Felice looked at this broken fragment of a log and said, "Hey, aren't those funny marks from an adze?"  Yep -- some miner, back in the 1800s, chopped out that lap joint with a handsaw and an adze: 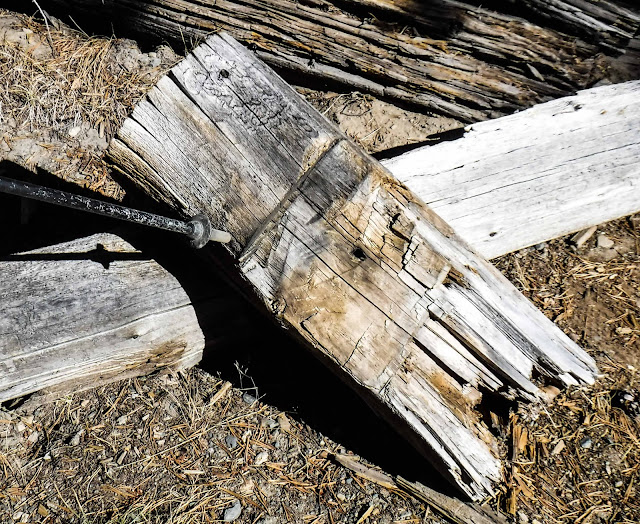 The trail to Mono Pass was steep but not too difficult.  We got to a ledge overlooking frozen Sardine Lake, Mono Lake, and the north end of the Mono Craters: 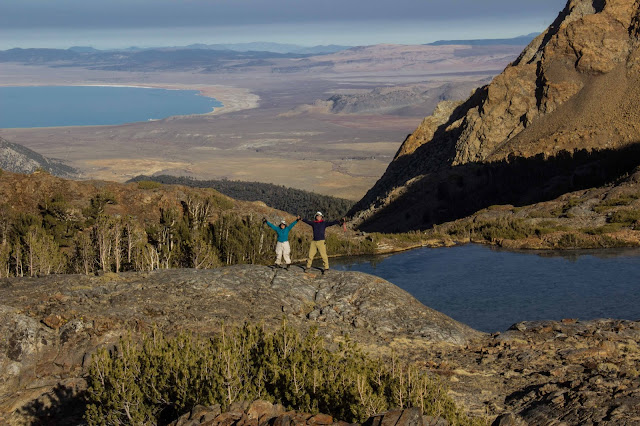 This was taken with Felice's iPhone -- as far as I am concerned, it was the best shot of the whole trip: 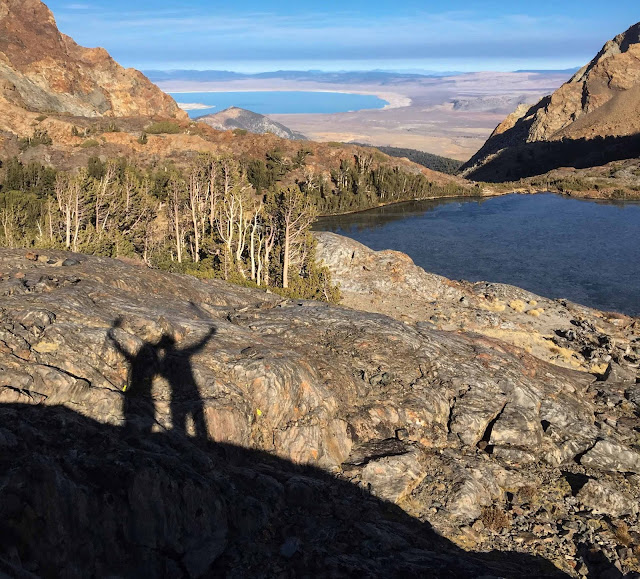 (By the way, the band of clouds over the Mono Basin is actually smoke from the Camp fire.)  We tried to take a "kissing" shot: 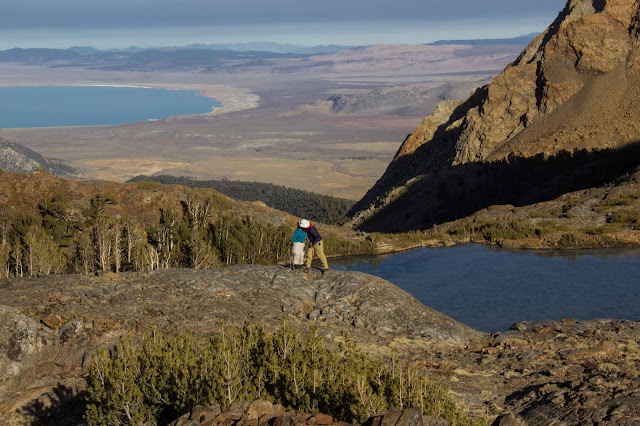 But then we got the giggles -- the robot camera trigger recorded the result: 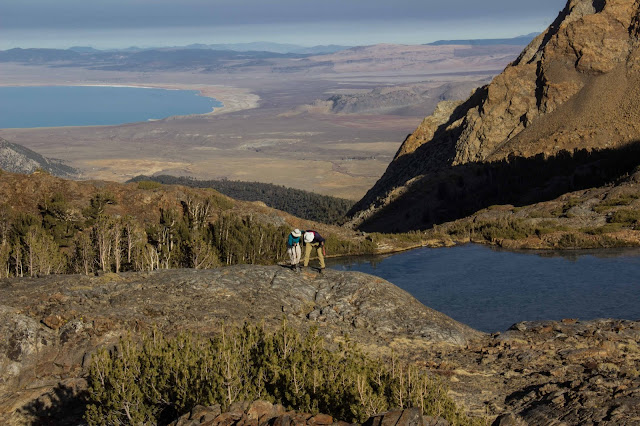 Back up the hill at Mono Pass, we stopped off at Summit Lake, which was (of course) frozen solid.  It looked like a great place for ice skating, for a brave person.  (Not us.)  The moon is visible in the upper left corner, and there is a thick band of quartz running diagonally down the north face of the mountain:

While we were at the lake, a "sun dog" appeared in the icy cirrus clouds: 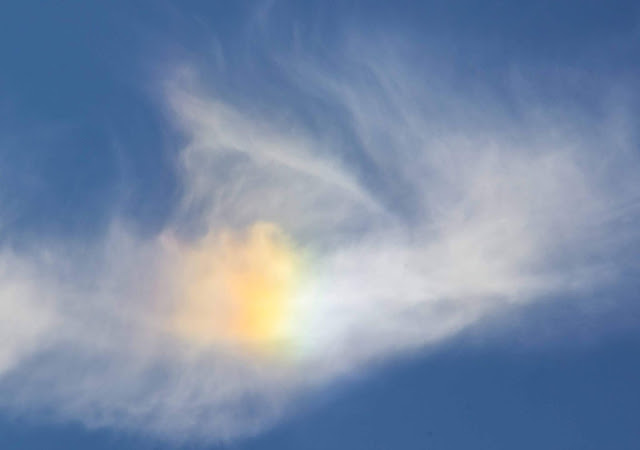 The sun dog was reflected in the lake ice, something we had never seen before.  I guess the ice acted as a prism, distributing and intensifying the colors of the sun dog -- if you look carefully, there is a wide swath of indigo on the left side of the usual red-orange-yellow bands: 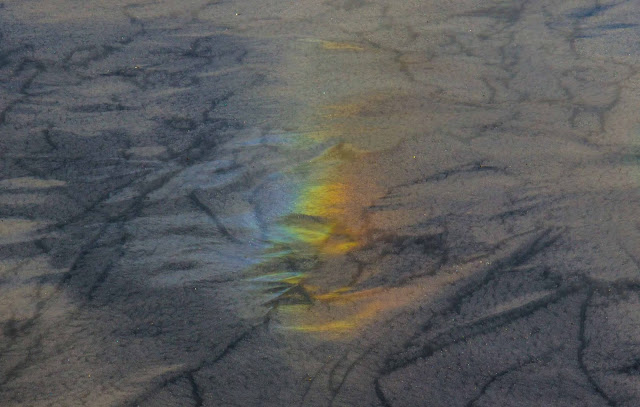 To be honest, the camera was able to "see" the colors in the ice better than we were, probably due to the glare.  Also, notice the random polygonal joints in the ice -- the joints were below the surface of the ice, which was almost perfectly smooth.

Before we headed back down from the pass, Felice took a moment to revel in the Big Empty -- a huge silent valley at high altitude, with no one around except for the two of us: 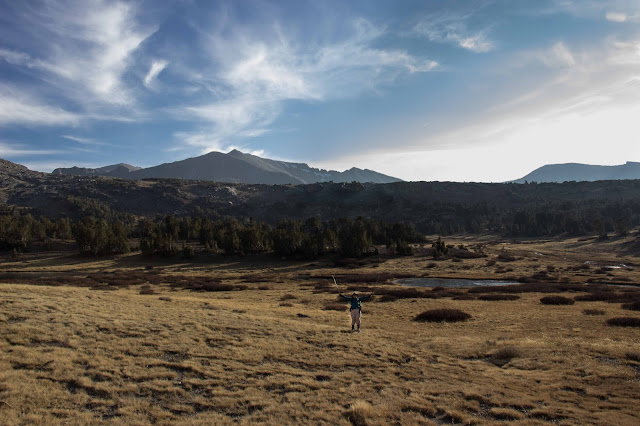 Knowing that the last half hour of the return trail was very easy, we planned to be back to the truck at around dark, using our headlamps if necessary.  As it turned out, we got back just before last light, so we did not get a chance to try out hiking with headlamps.  Perhaps another time.

November 16:  The morning was a little hazy.  We hiked up the moraine to the north of the campsite -- the trailer is on the left:

From that same spot on the moraine above the trailer, Felice is pointing to Mono Pass: 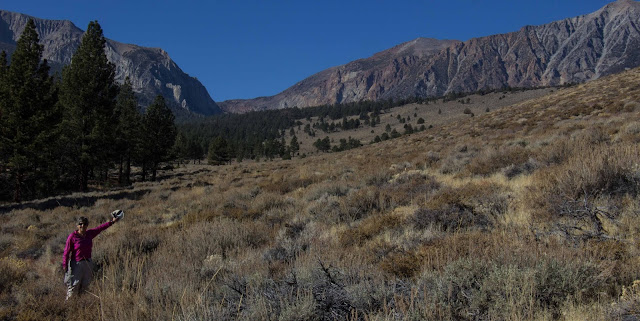 This is a wider shot from the top of the moraine -- the trailer is on the far left, and that is probably Parker Peak (almost 13,000 feet) in the center: 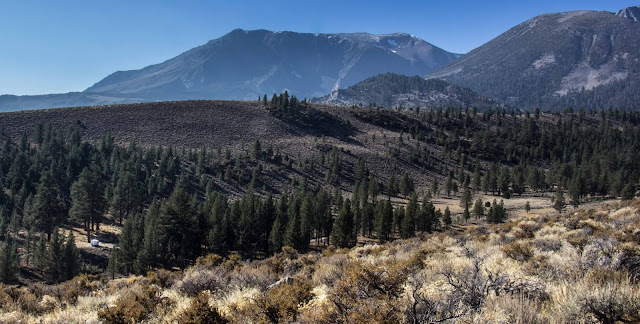 Since our goal was to head down to Lone Pine in the late afternoon, we took a short and easy hike to Parker Lake.  The setting sun was backlighting the smoke and haze, so the lighting was pretty challenging; 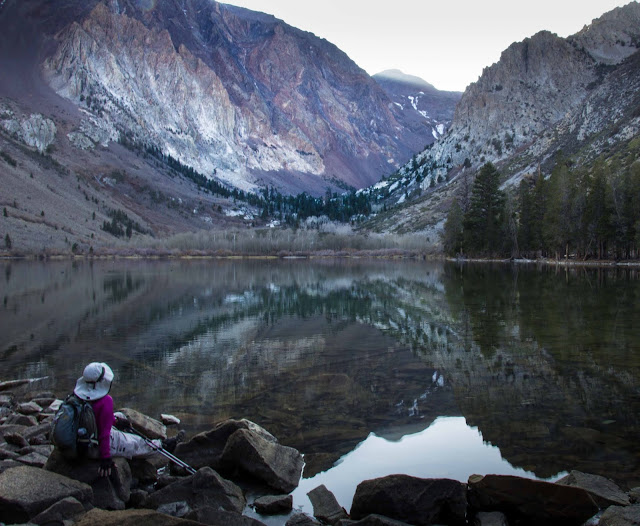 That shot was taken at an eighth of a second hand-held, which sounds impossible -- this was a test of the onboard image stabilization software, and it gets an A+.

This shot of the creek was also at slow speed, hand-held: 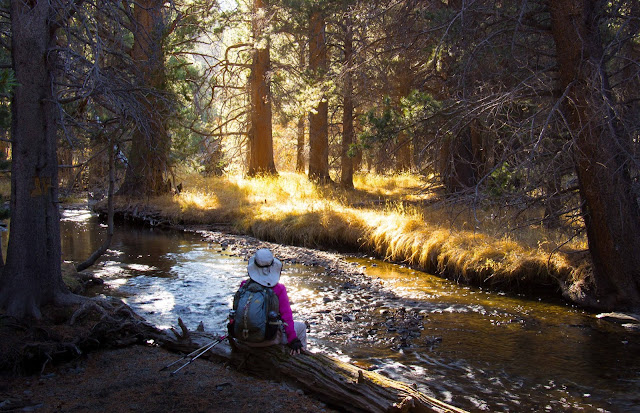 We got back to the trailer, hitched up in the twilight, and made it down to Lone Pine in time for fresh hot pizza!  It really was not the world's best, but it tasted great -- we sat in the truck, parked by the side of Highway 395, and enjoyed the rare treat of eating less-than-healthy food.
Posted by Dan Schechter at 3:22 PM 5 comments: