"This is going to be uniquely procedural."  That is what we predicted when we decided to combine boondocking (camping in the national forest, not in a campground) and skiing in the same trip, something we had never done before.  Each activity requires a lot of gear and a lot of preparation.  Taken together, they were, well, uniquely procedural.  But in a good way:  the trip was a success!

March 1:  We stopped for the first night at Keough's Hot Springs, south of Bishop.  They have a campground with electric hookups, and their main building encloses a warm pool (90 degrees) and a hot pool (104 degrees).  The facilities are best described as "funky:"  the building dates from around 1919 and has not been altered much since that time.  But it was pleasant to hang out in the hot tub after a long drive.  Many of the other customers had come from Mammoth to soak in the tub after skiing and before driving back to Southern California.

During the night, fresh snow fell in the higher elevations -- almost a foot at Mammoth and June.

March 2:  We spent the day looking for boondocking.  (This sounds like a chore, but it's actually a lot of fun.)  Our goal was to find something not too snowy and not too far from June Lake.  The Inyo National Forest's motor vehicle use maps showed the areas that were open for boondocking; I had then used Google Earth to preview each potential site, had saved the images on my phone as jpegs, and had dropped precise waypoints on our ihikeGPS apps to provide real-time phone guidance.  (It sounds like a lot of work, and it is, and yet it is part of the fun, too.)

We first looked at sites in the area around Deadman Summit and Obsidian Dome.  Although the main forest roads were generally free of snow, the spur roads were not.  The campsites (mostly above 7500 feet) were just a little too snowy for safety.  We parked the car and hiked into the back country, but there were drifts more than a foot deep in many places.  Too risky -- getting the truck or the trailer stuck (or both!) would be very expensive.  Nope.  (A wise person once told me, "The term '4x4' means 'you will still get stuck, just a quarter mile further from the pavement.'")

We then looked at a boondocking area near Mono Lake, the Aeolian Buttes.  The sites were just below the snow-line, at around 7100 feet.  But the sites were rather bleak and dusty, there were limited views of the mountains, and the soil was mostly pumice.  Nope.

We finally looked in the area north of June Lake and south of Lee Vining.  (I can't be more specific than that.)  Bingo!  We scored a great site west of the highway, with a 180 degree view of the snowy east side of the Sierra.

Access to the campsite was pretty tricky:  the primitive "two track" access road was so narrow that the thorn bushes scratched both the truck and the trailer (more Sierra pinstripes!), and then we had to do a tight three point turn and back the trailer up a steep sandy hill to a very small semi-level pad.  A trailer any bigger than ours (12 feet) would not have fit into that spot.  My handy Hitchball Wizard guided me right into place, easy as pie.  (I don't know how she does it, but I am very grateful.  She waves her hands and I just follow her directions.)

All of the nearby peaks looming over us were 12,000 footers:  from south to north, we could see Carson Peak, Parker Peak, Parker Canyon, Mt. Lewis, Mt. Gibbs, Mono Pass, Mt. Dana, Tioga Peak, and Lee Vining Peak.  The cold late-afternoon wind was howling out of the northeast, blowing the fresh snow off the ridges: 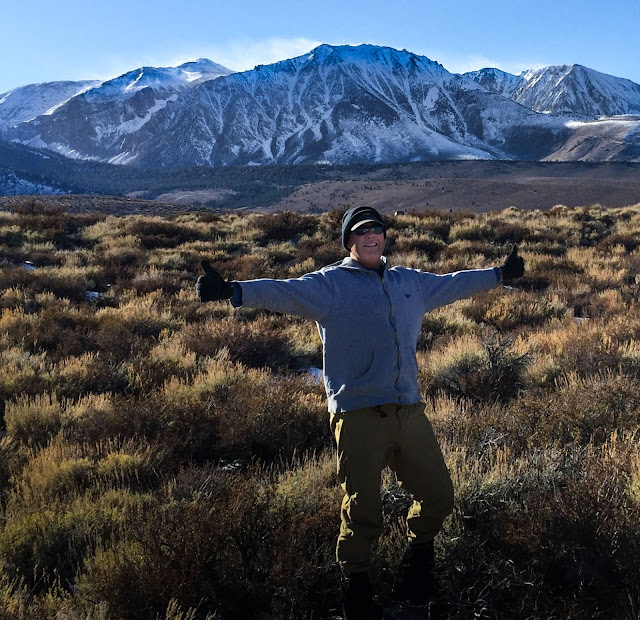 After we got the trailer stabilized and arranged and all of our equipment secured, it was time for a snack.  This was the evening view from the dinette table, inside the trailer -- that's the window frame at the top of the shot: 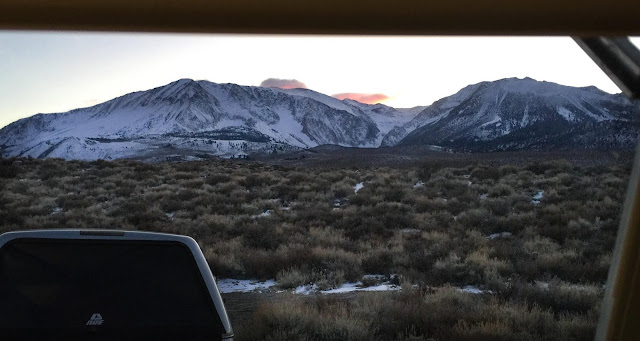 The cold weather gave us a perfect excuse for hot chocolate laced with a shot of Bailey's Irish Cream and a splash of Kahlua, a ritual that we enjoyed every afternoon before dinner.  (Just because we are "camping" does not mean we have to suffer!)

That first night was the coldest of the week, probably into the mid-teens.  We were plenty warm (a down comforter and several blankets), and our heat cables kept the fresh water tank from freezing.

March 3:  It was 31 degrees inside the trailer when we woke up.  We took the foam pad off the front window, hoping to see the sunrise on the mountains.  This is what we saw: 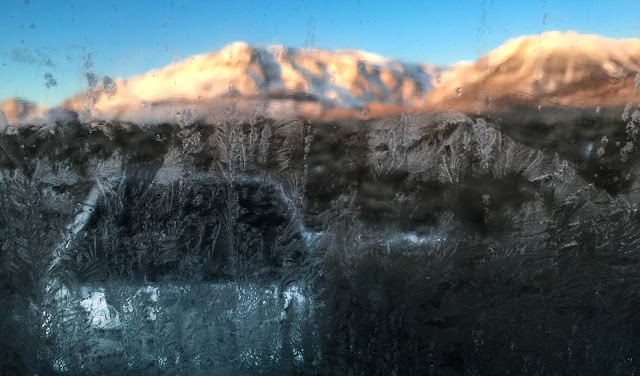 Yes, that is ice on the inside of the window, and it did not want to come off.  So, Plan B -- go outside and look at the sunrise:

After breakfast, we stepped outside with our coffee: 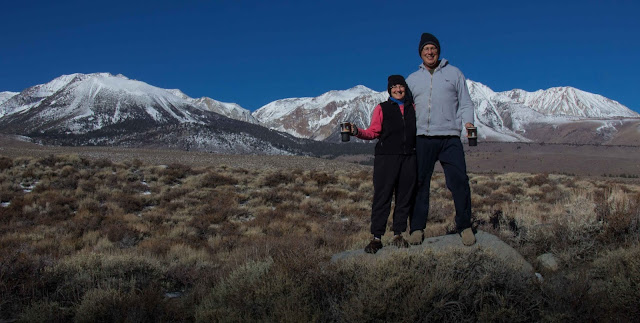 A little later that morning, on our way to June Mountain, we got a shot of the trailer with Mono Lake to our northeast, in the background.  The trailer is to the left of the middle of the photo, a little white box in a sea of sagebrush:

The skiing was a pleasant surprise -- we had expected patchy snow because of the dry winter, but the combination of snow-making equipment and the recent storm had created perfect conditions, with a thin layer of soft snow over a firm base.  There was almost no one else on the mountain: 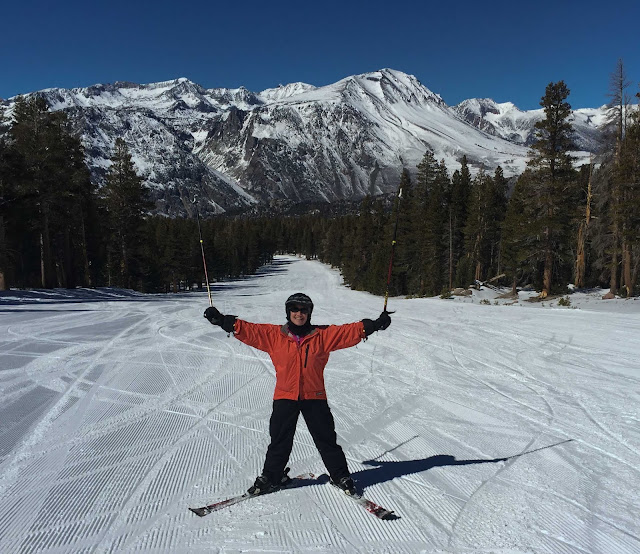 We really enjoyed the intermediate runs, cruising on the corduroy in a leisurely fashion.  Far from epic adventure, but just fun:


That evening, as we returned to the trailer, we grabbed this shot of the backside of the campsite.  The trailer is in the middle of the photo, just to the right of Parker Pass:

March 4:  This is a "morning version" of the previous shot:

We started the day at Obsidian Dome, walking with our microspikes over the icy, crusty snow.  The microspikes were great on the solid ice.  Not on the snow, though.  It was so warm that the snow would melt and refreeze underfoot, creating huge awkward clumps of icy snow that made it difficult to walk: 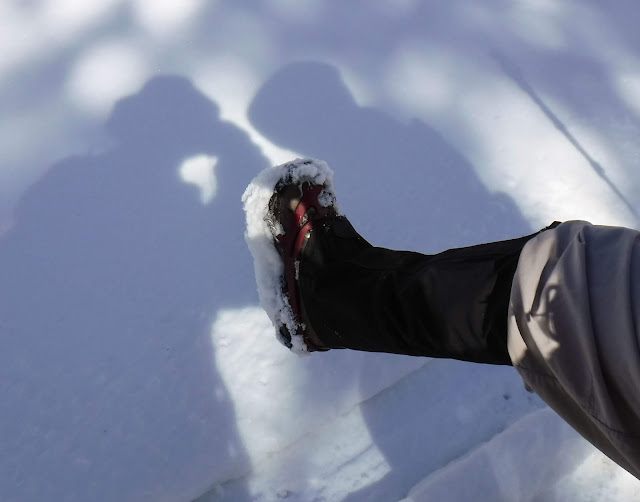 We had experienced the same clumping phenomenon when using snowshoes in similar conditions.  We had hoped that microspikes would be the magic bullet.  Nope.

So, Plan B.  We drove into Mammoth Lakes, looking for a source of fresh water.  (We actually had plenty of fresh water in our holding tank, but we wanted to fill one more jerry can just in case of an emergency.)  The ranger at the visitors' center told us that there were no outdoor water faucets operating anywhere because they would freeze at night.

We asked her whether we could fill our jerry can from the faucet in the restroom, and she said we could.  But the problem, of course, is that the bathroom sink faucets were not made for filling jerry cans; the water emerged from stubby little openings, with no way to attach a hose.

Back to the truck -- what to do?  Felice spotted an empty 16 ounce plastic water bottle in the cargo bed of the truck and grabbed it. (This was a minor miracle -- we almost never have plastic bottles in the truck because they get put into the recycling bin.)  I said, "Wait, that's no good.  It'll take us a year to fill the little bottle, pour it into the jug, refill the bottle, and so on."

She smiled, already having developed a MacGyverish scheme.  There was a hose in the truck that I had brought to fill the jerry cans.  She screwed the plastic bottle into the hose fitting -- it fit perfectly!  (That was a major miracle -- what are the chances that the bottle would fit the hose??)  She then used the scissors on her Leatherman tool to cut a slice off the bottom of the water bottle, creating a sideways funnel.

Back to the bathroom -- success! 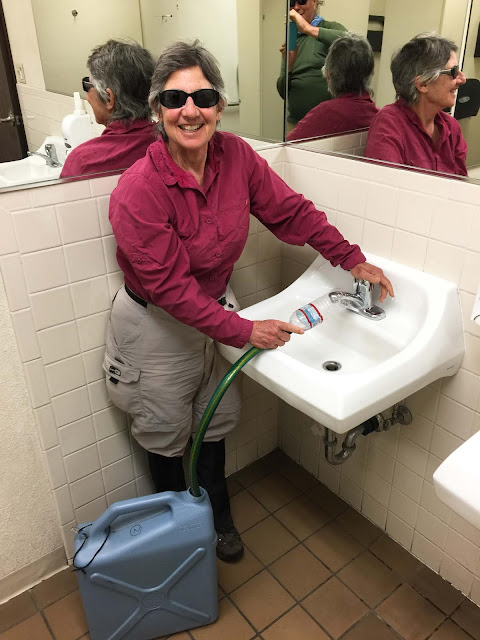 And a MacGyver selfie in the mirror: 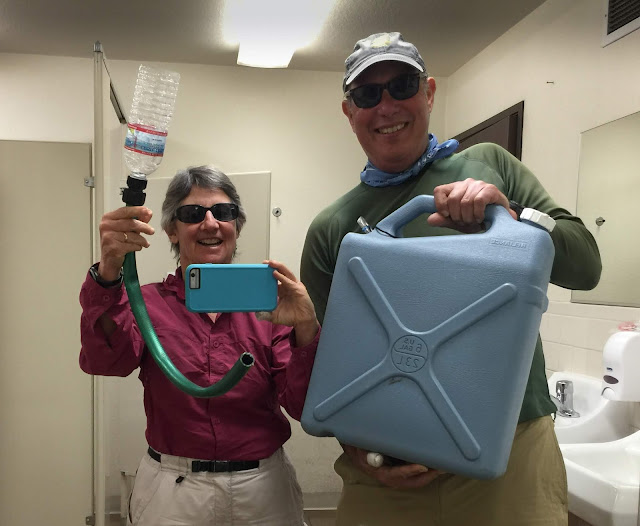 After that triumph, we headed out to the Lake Mary area, hoping (correctly) that the snow had cooled off enough so that clumping would no longer be a problem.  We walked out toward the lake, first passing a road sign.  Here is the sign in late April of 2017: 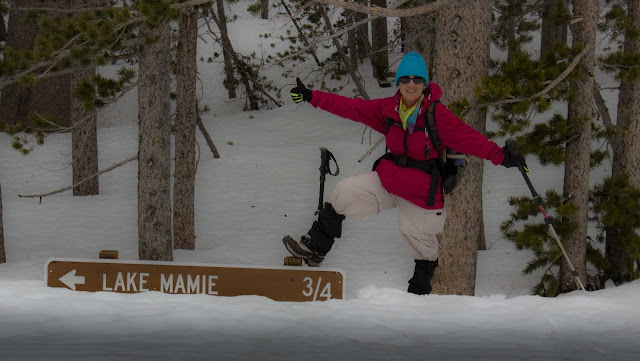 And this is what it looked like in early March of 2020: 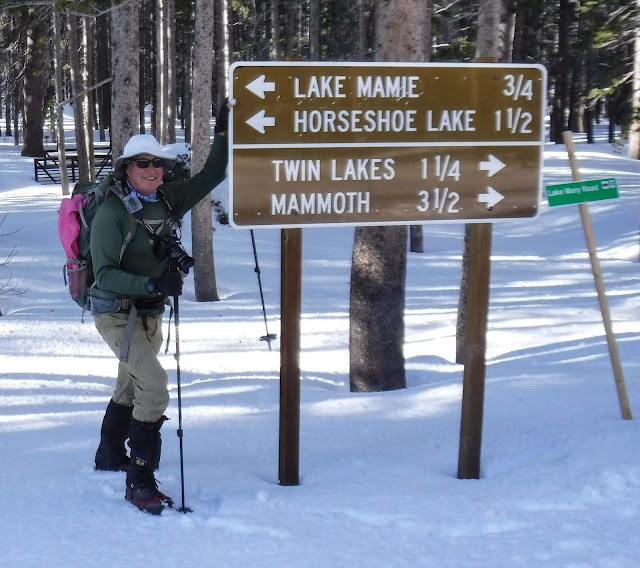 That's a seven foot difference in the snowpack.

We walked to the edge of frozen Lake Mary.  The area behind us on the left is the Mammoth Creek/Duck Pass drainage, a familiar destination during our summer hikes: 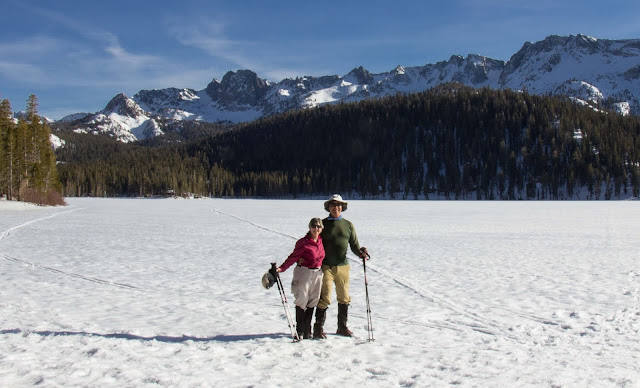 On our way back to the trailer, we grabbed a pizza at June Pie -- a very rare event.  Pizza!  We ate the whole thing, something we've never done before.  Very memorable.

That evening, I once again tried to capture the essence of boondocking in a little trailer in the middle of nowhere: 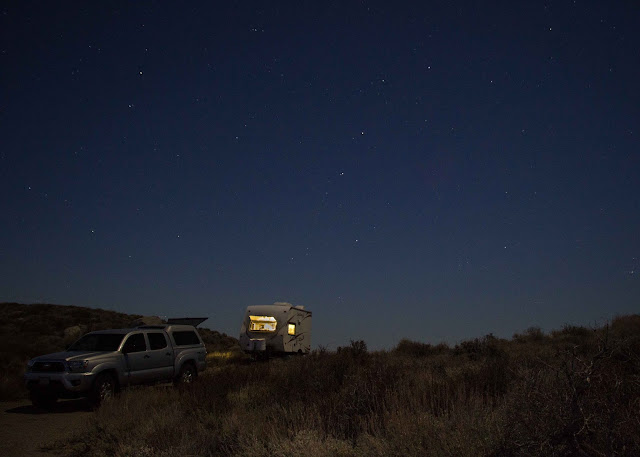 The moon was almost full and illuminated the mountains.  Even with the moon, the stars were surprisingly bright -- Orion is in the top center of this shot, just above Parker Peak: 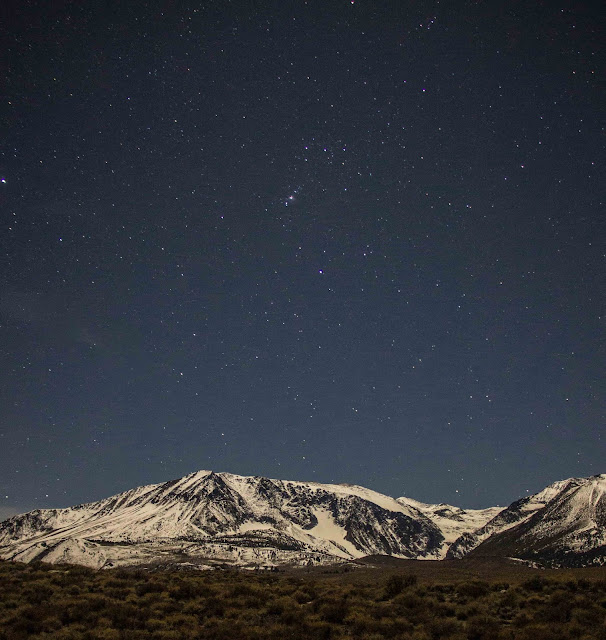 March 5:  We went back to June Mountain for another day of skiing.  Carson Peak was reflected in June Lake -- the ski resort is on the left side of the shot:

The mountain was, if anything, even emptier than it had been a couple of days earlier, but the snow was still excellent: 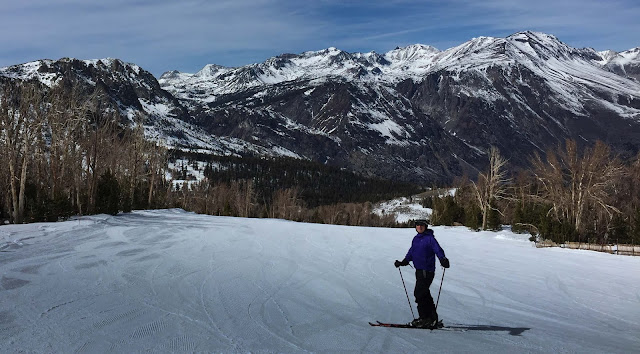 We were treated to a spectacular sunset -- these are lenticular clouds: 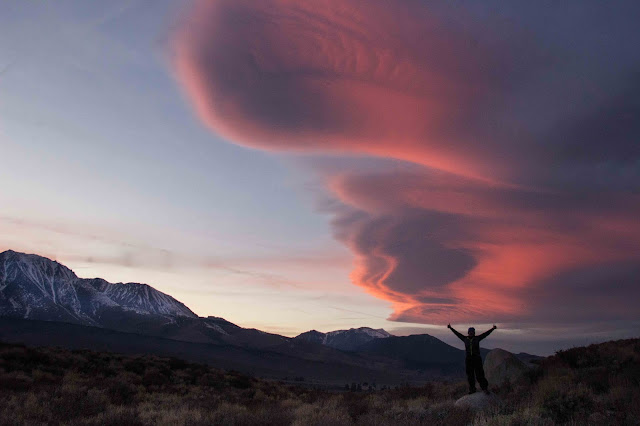 And yes, that is exactly the way it looked.  This is not a trick shot.

March 6:  The day started with yet another sunrise photo -- I can't resist those shots:

Even with a wide-angle lens, it was not possible to get a complete panorama:

We hiked to Parker Lake, to take advantage of the unusual fact that the forest roads were open while the mountain was still snowy.  For most of the day, we were the only people on the trail.  The trail was intermittently icy and dry, so we had to take our microspikes off and put them back on a couple of times.  Not a serious problem, and we were very glad to have them on some of the icy, steep traverses.

Up at the lake, a cold wind was howling down Parker Pass.  The lake was partially frozen: 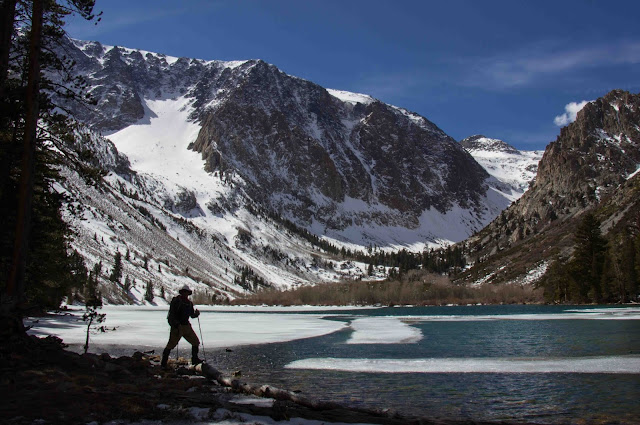 Felice decided that a black and white version would be a proper homage to the surrounding Ansel Adams Wilderness: 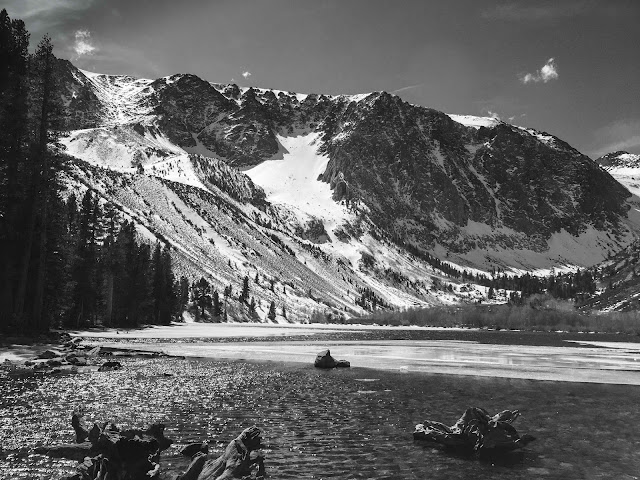 We returned to the truck in the mid-afternoon and had time to take a walk on Tioga Road, which was closed to traffic but snow-free:

And this is what the same place looked like almost exactly a year ago: 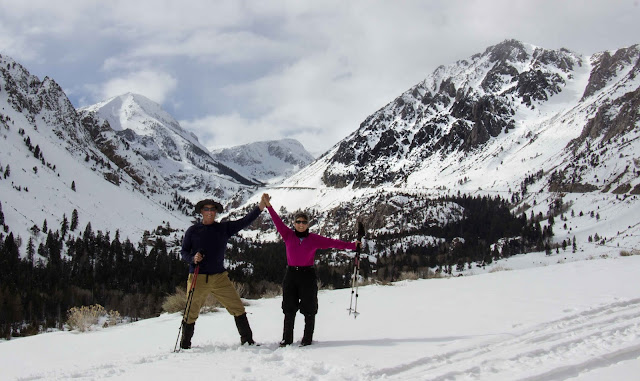 March 7:  A snowstorm was rolling in over the mountains while we were packing up to go home.  No problem -- we just bundled up and took care of our chores.  We rolled out just before the storm hit, but we were sorry to leave this campsite:

(Post-script:  just after we got home, the coronavirus pandemic hit the U.S., and the "shelter in place" orders were published.)
Posted by Dan Schechter at 12:06 PM 3 comments: