(You can click on the photos to see a slideshow, and then hit "escape" to get back to the text.  Also, please note that both Felice and I took these shots, although I do the photo editing.)

March 8:  We had a week available (hurrah for Spring Break!), so we headed to Upper Pines Campground in Yosemite, roughly a seven-hour drive with the trailer.  There were some vacancies in the campground, but it was a little busier than we had expected.  The campground was nice, but we have been spoiled by boondocking out in the middle of nowhere; there was a little generator noise every evening.  Not bad, but not utterly silent, either.

March 9:  As we left the campground in the morning, we happened to catch a view of Yosemite Falls with an intense rainbow.  Bear in mind that this picture was taken with a polarizing filter and a zoom lens -- it did not look quite like this to the naked eye, but it was still great: 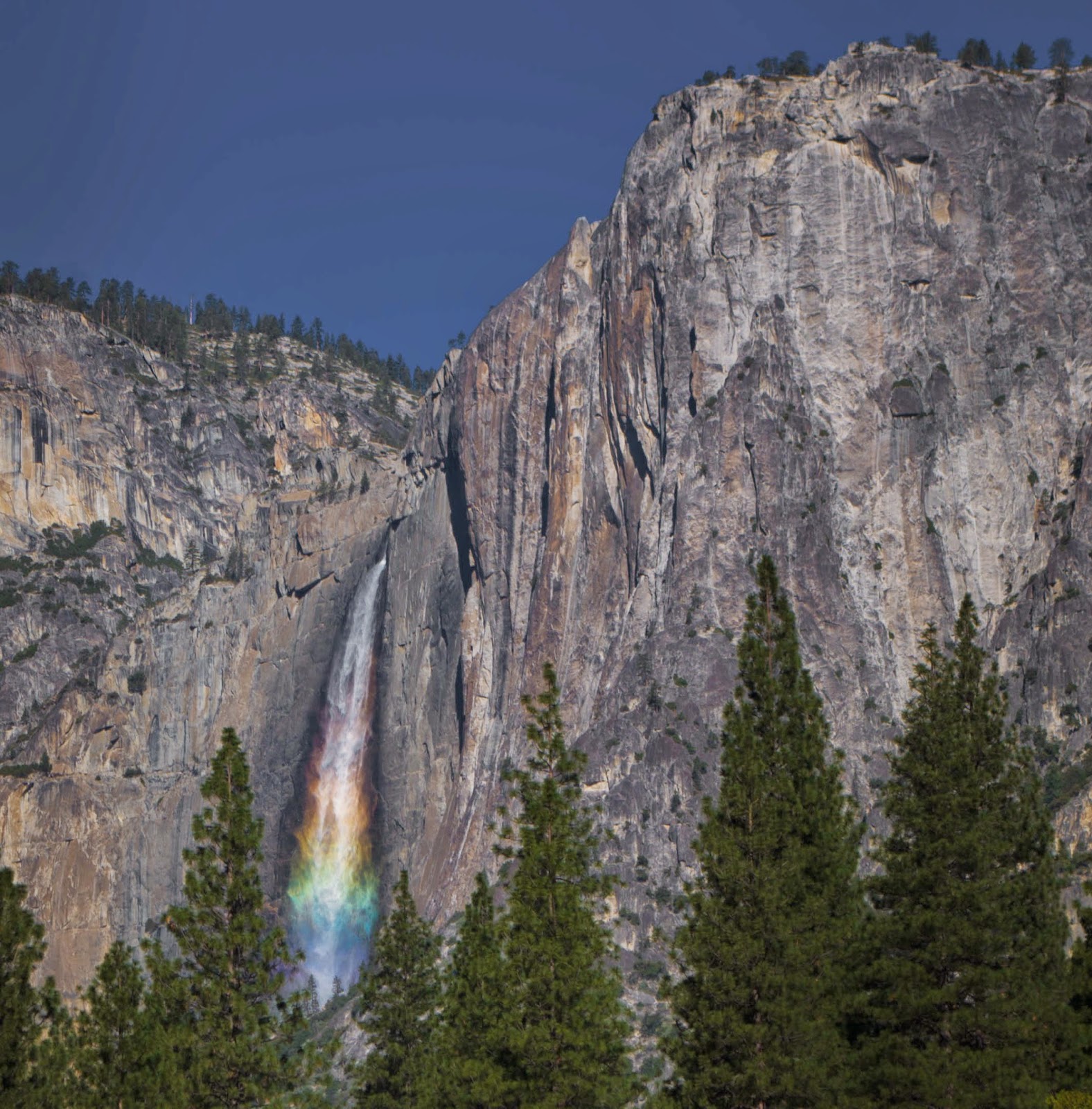 We spent the day on the Mirror Lake trail.  In the morning, before the wind came up, it really was a mirror -- that’s Mt. Watkins (roughly 8400 feet) in the background: 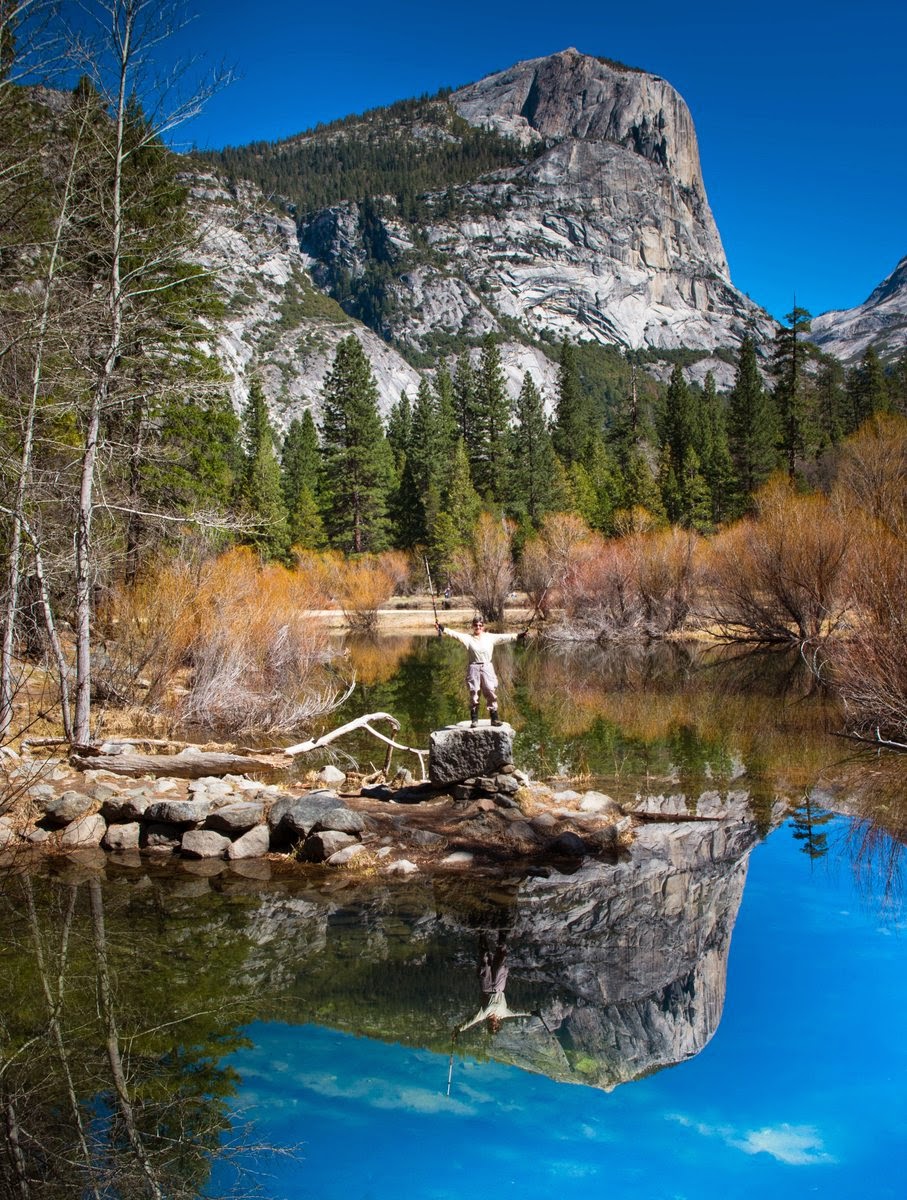 North Dome (about 8000 feet) and Basket Dome (on the right) were directly above our heads, four thousand feet straight up: 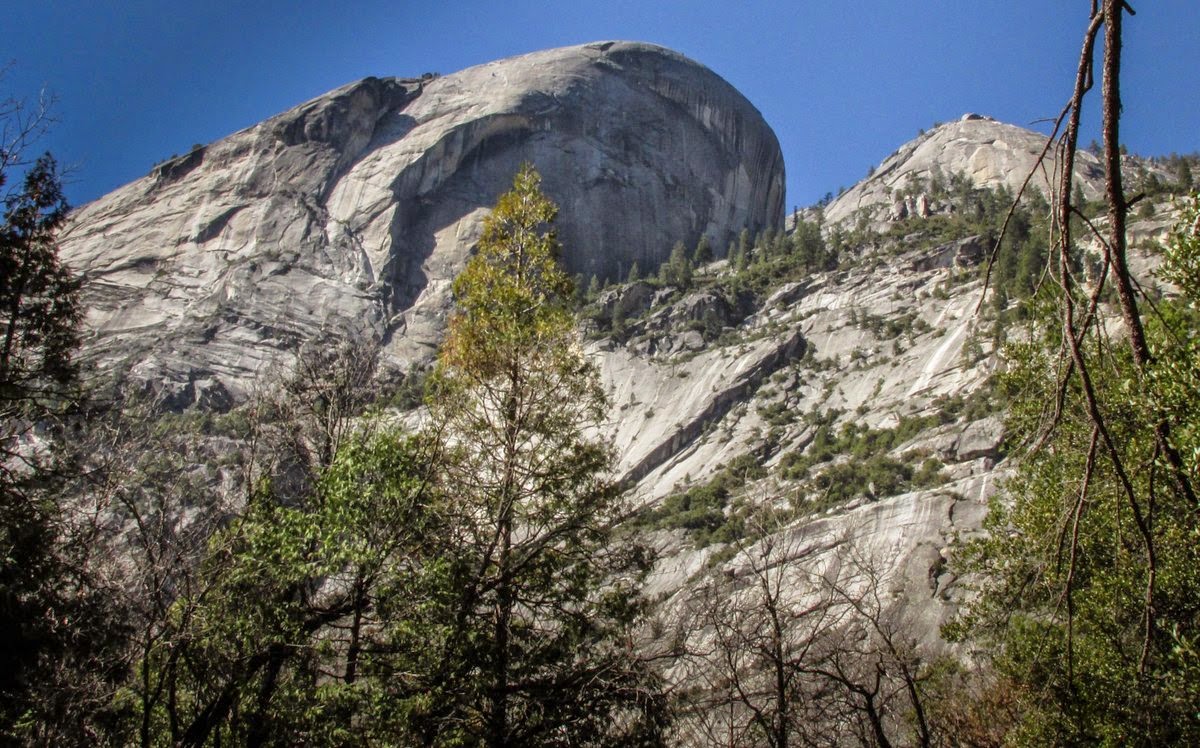 The last time we hiked the Mirror Lake trail (in 2012), the 2009 rockslide blocked the way.  But the Park Service has now cleared a trail through the jumble, and the devastation is impressive.  Many of the boulders are as big as houses; the freshly-exposed white granite is very stark.  In this shot, I am in the lower left corner, looking up at the source of the slide on Ahwiyah Point at 6700 feet, about 2700 feet above the trail.  Half Dome, in the center, is another 2000 feet higher than that: 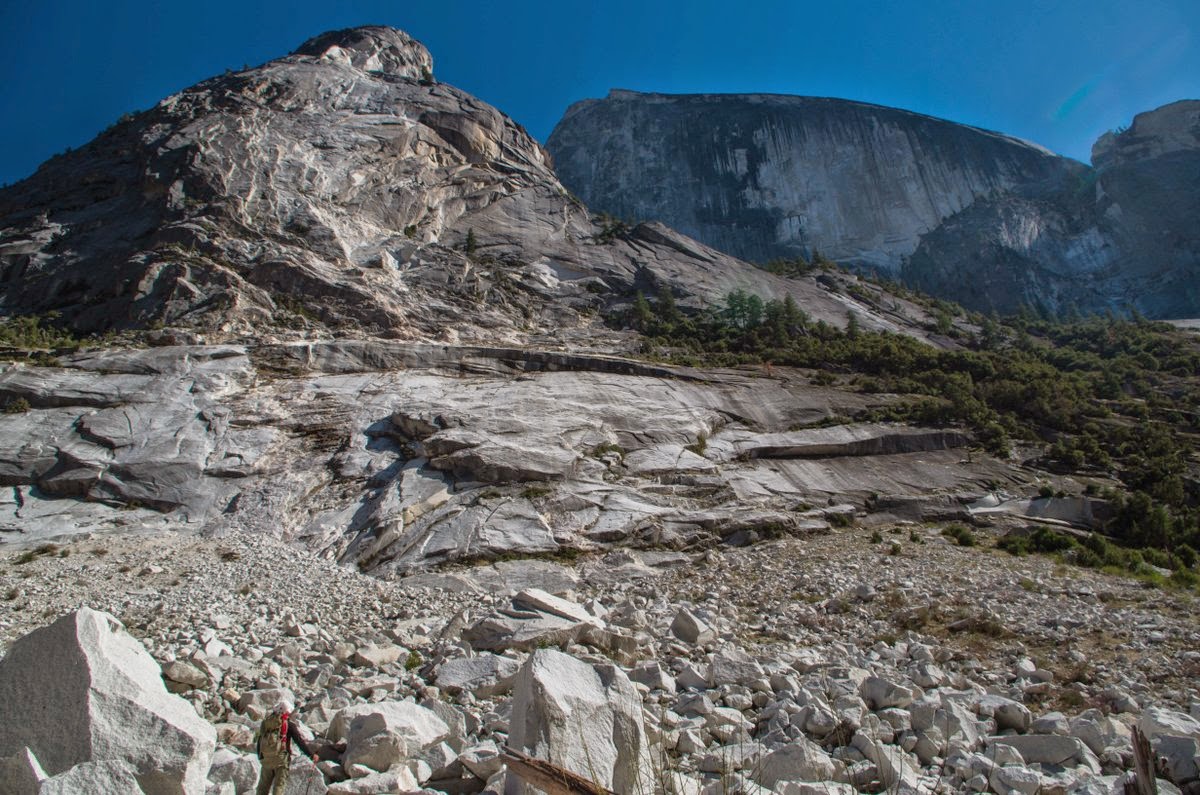 Late that afternoon, back at the campsite, we were surprised (and pleased) that we had cell coverage, without having to drive to the Visitors’ Center.  This meant that I could connect with the Registrar at school and “sweat out” my midterm exam (in case of any last-minute problems), all while sitting by the campfire in my funny Russian fur hat, enjoying a refreshing beverage in the cold evening air.  (It looks like I was relaxing, but actually my thoughts were with my hard-working students.)  This has been a long-held dream, at last fulfilled.  Better yet, the phone did not ring -- the exam went off without a hitch, as it always has for the last 35 years: 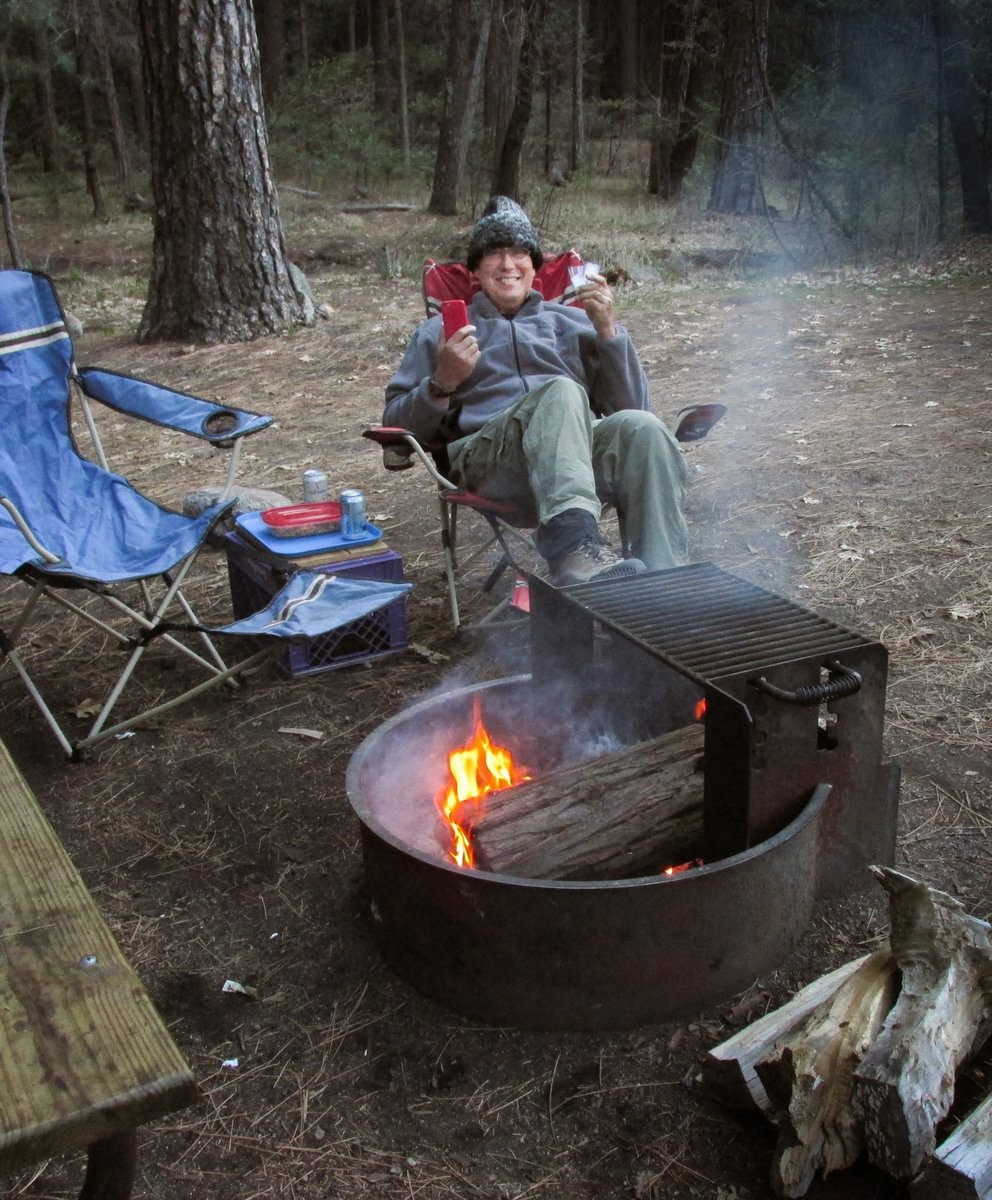 That evening, the stars were wonderfully bright.  Unfortunately, because the walls of Yosemite Valley are so high and so vertical, and because the valley is so narrow, most of the sky is blocked by the granite cliffs.  In this shot, Orion is just rising over Glacier Point to the south of our campsite -- notice the three horizontally-aligned stars in the center of the shot, just above the "V" in the rim of the cliff.  But there were so many stars that the constellation was more difficult to see than it would be in a light-polluted area: 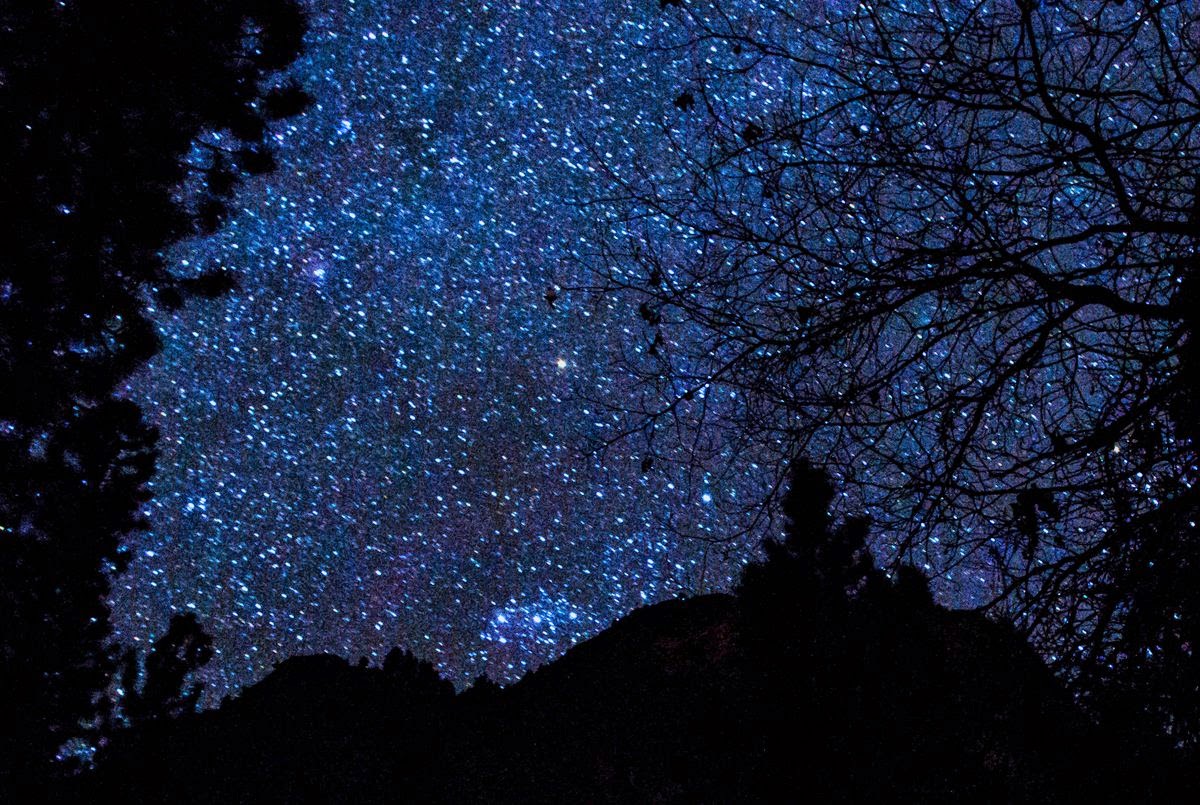 Toward the north, we could see all of the Big Dipper, which is upside-down during the evening at this time of year: 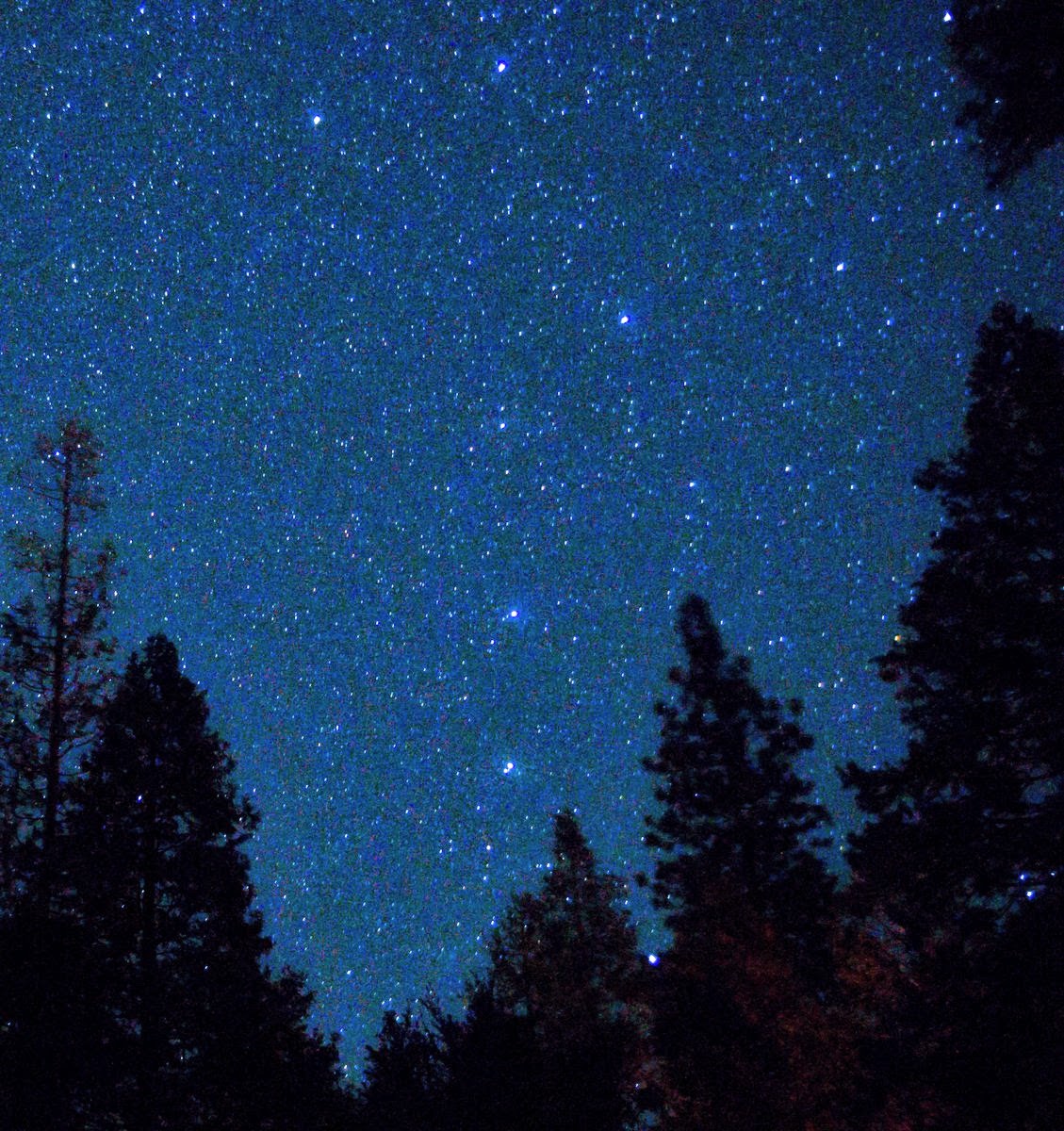 March 10:  We took advantage of the absence of snow and ice, a rarity for early March, and hiked to the top of Nevada Falls, an eight mile round-trip with 2000 feet of elevation gain.  Even though this is a drought year, there was plenty of water in Vernal Falls, although the Mist Trail was not as misty as it usually is in springtime: 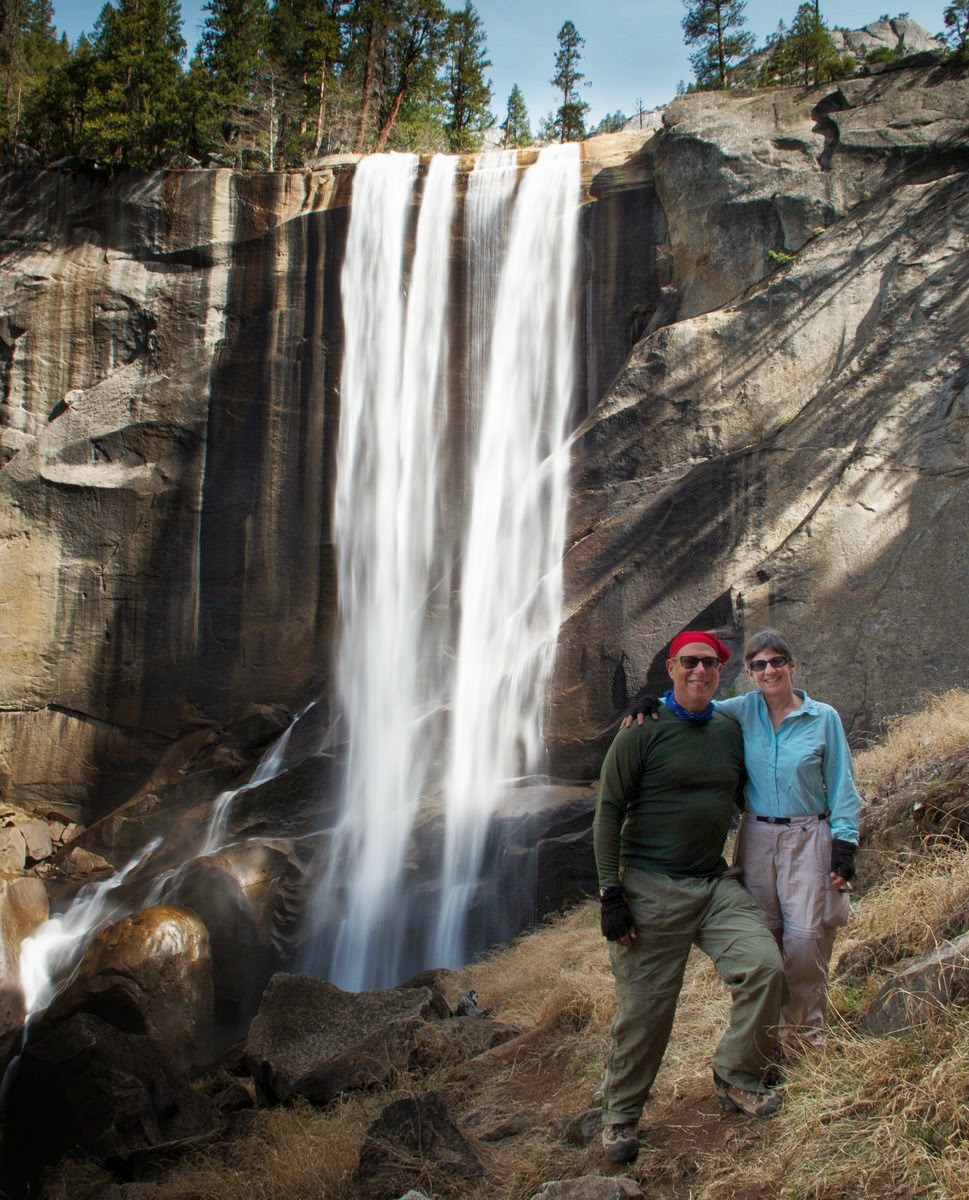 The rainbows were brilliant in the morning light: 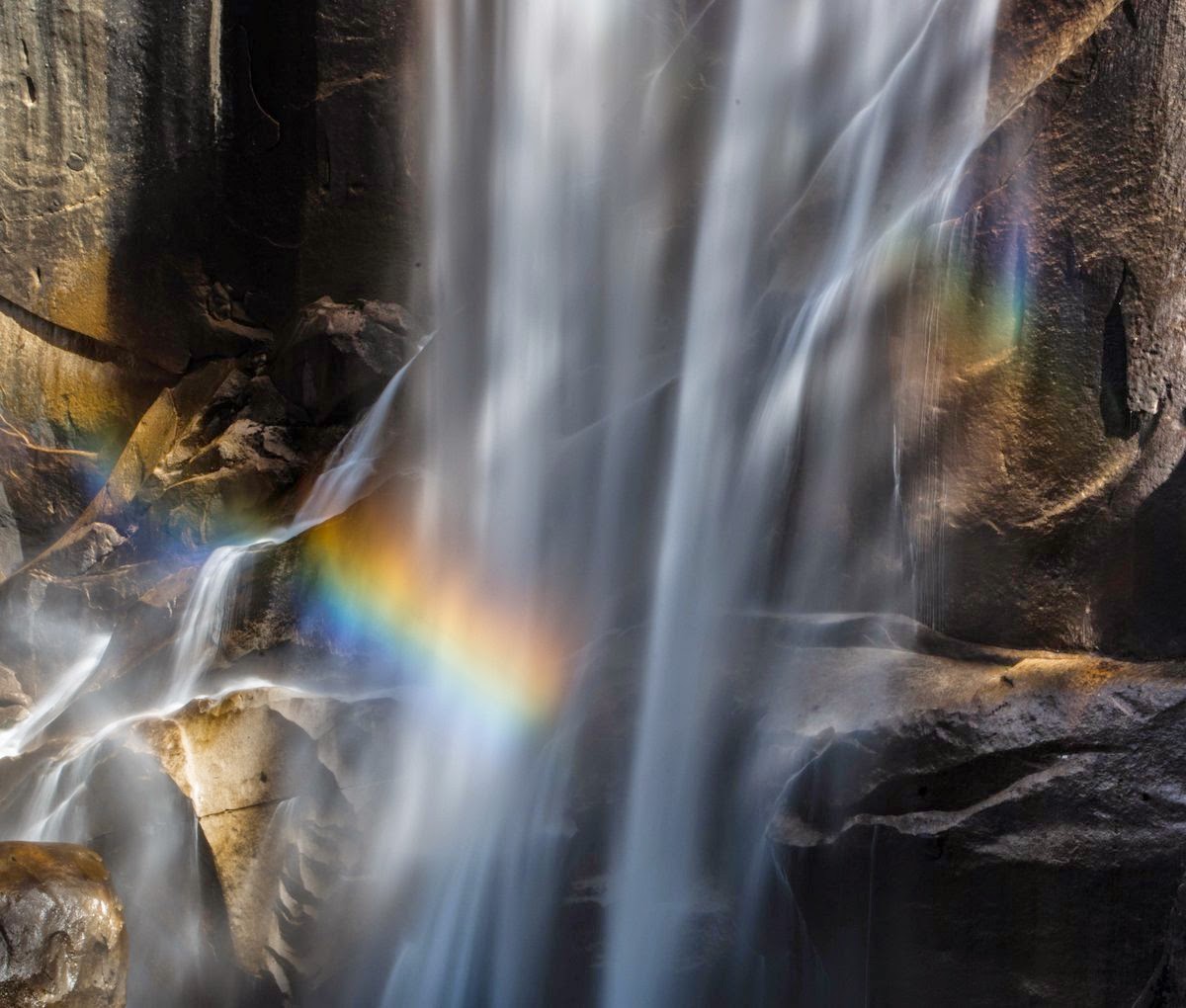 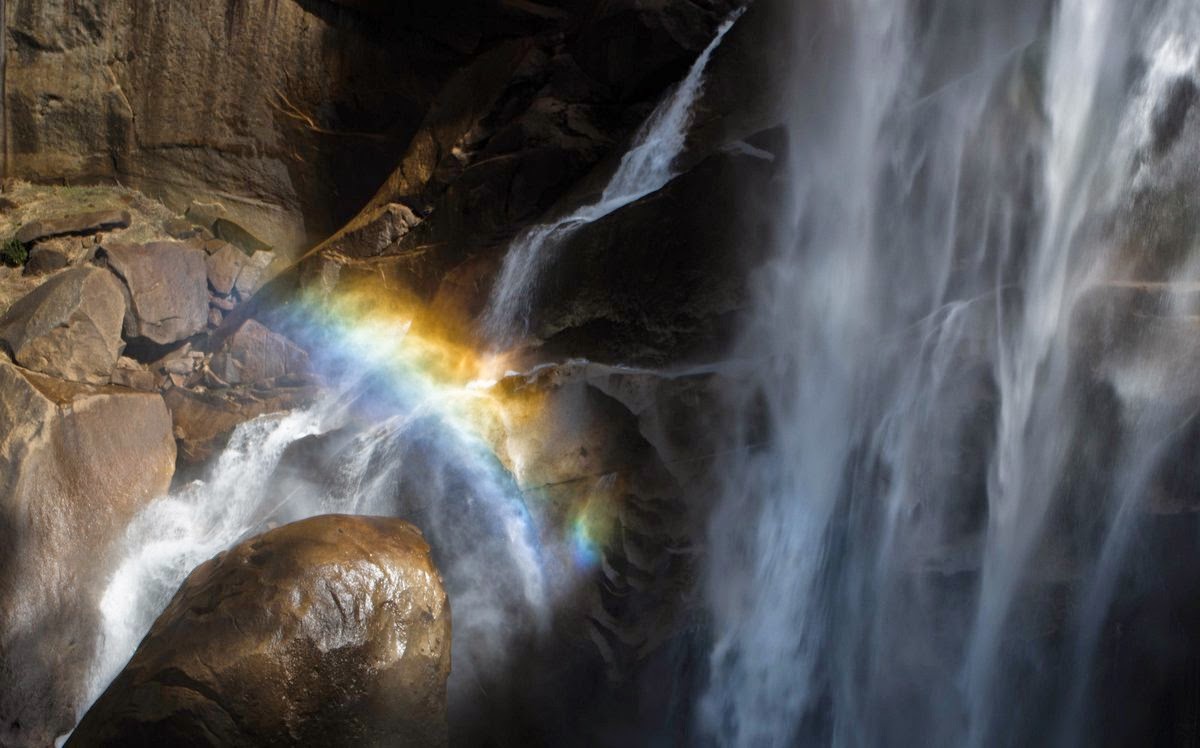 The “roostertails” of Nevada Falls, a 600 foot drop, were backlit by the morning sun: 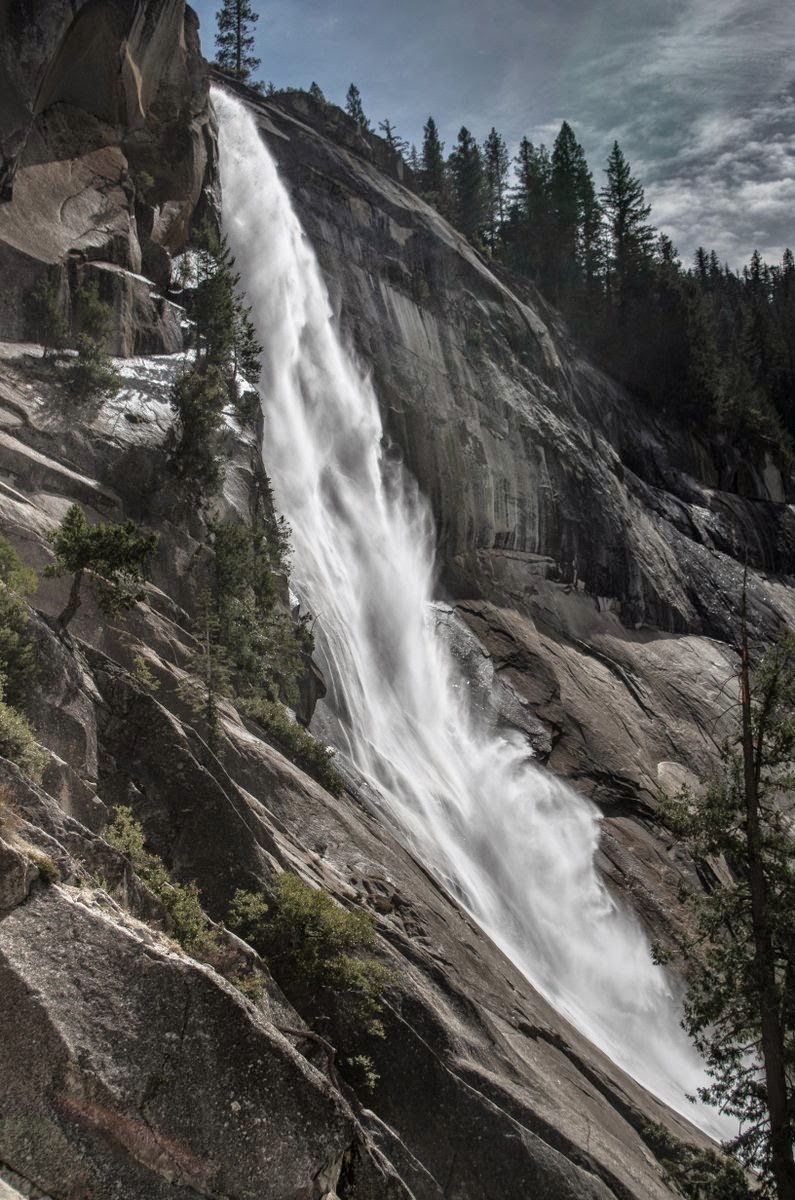 During our earlier trips to Yosemite, we had never been able to get to the top of Nevada Falls because of the ice, so this was new territory for us -- we were able to get right up to the edge of the cliff: 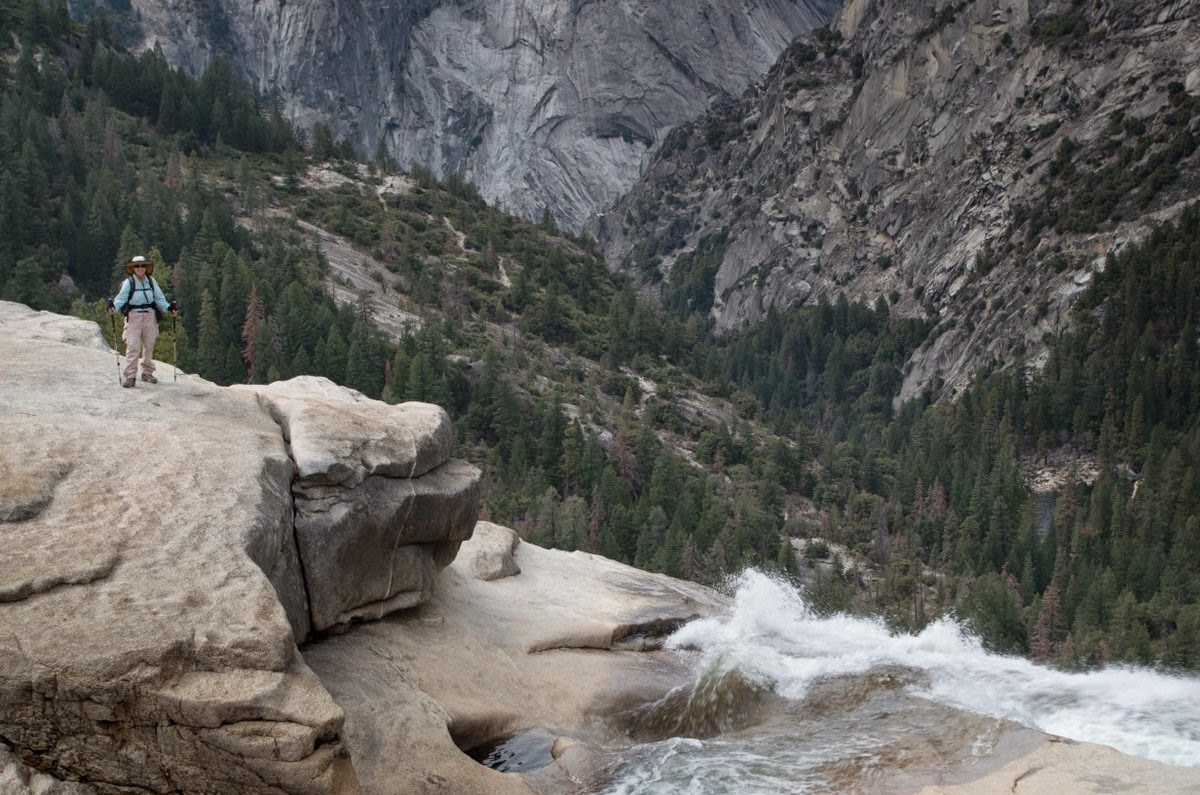 Felice took one of her patented “boot shots” at the lip of the falls: 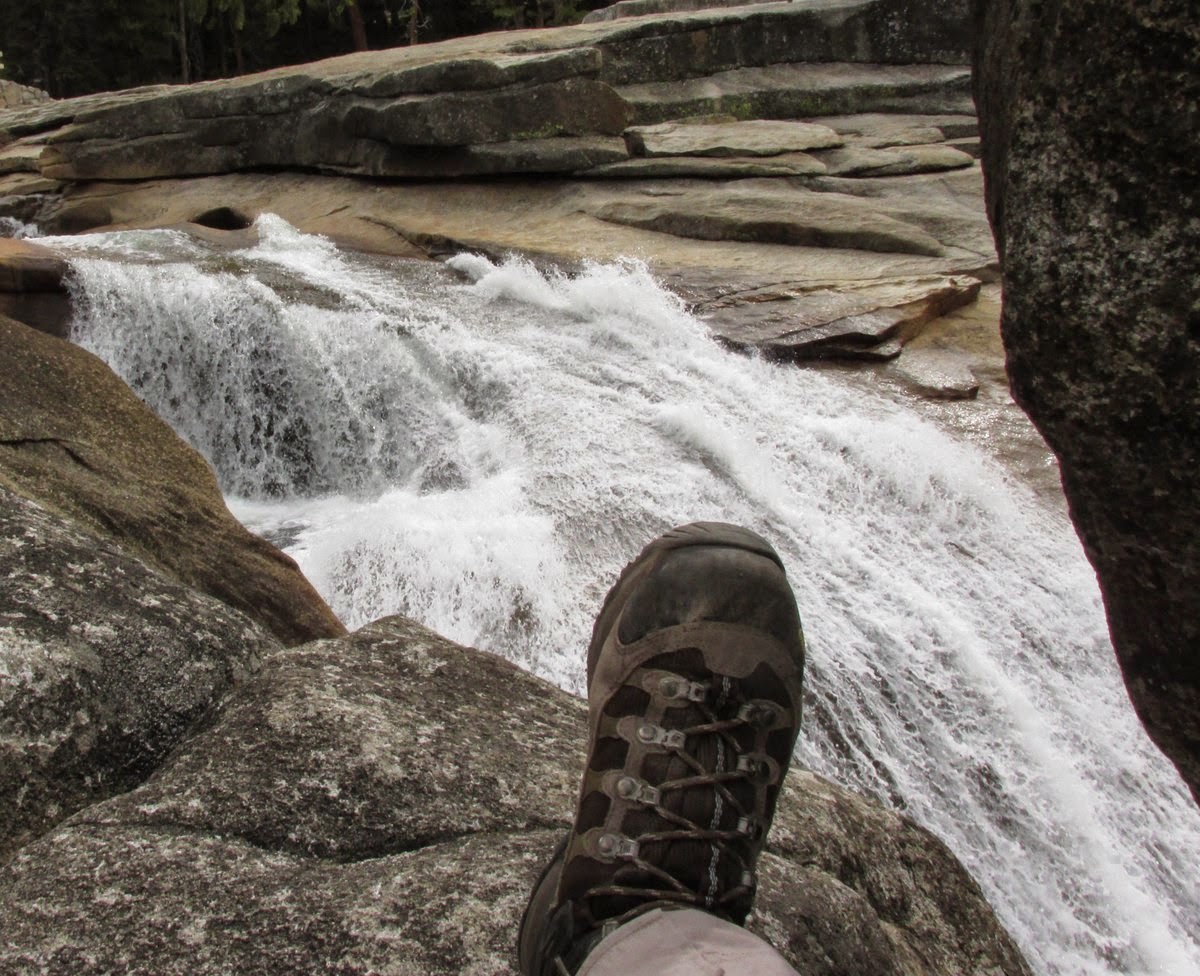 I took one of my patented “slow shutter” shots at the same place: 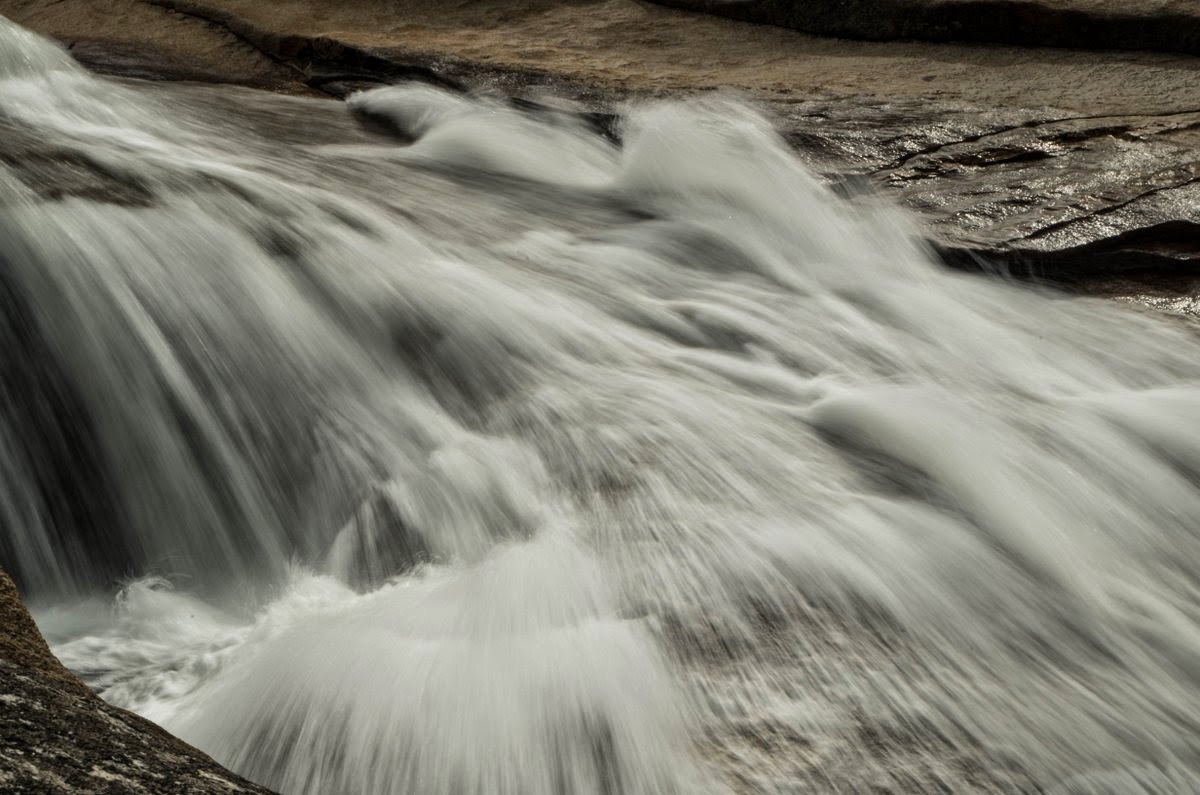 Liberty Cap, at 7000 feet, rose a thousand feet up from the granite shelf above Nevada Falls: 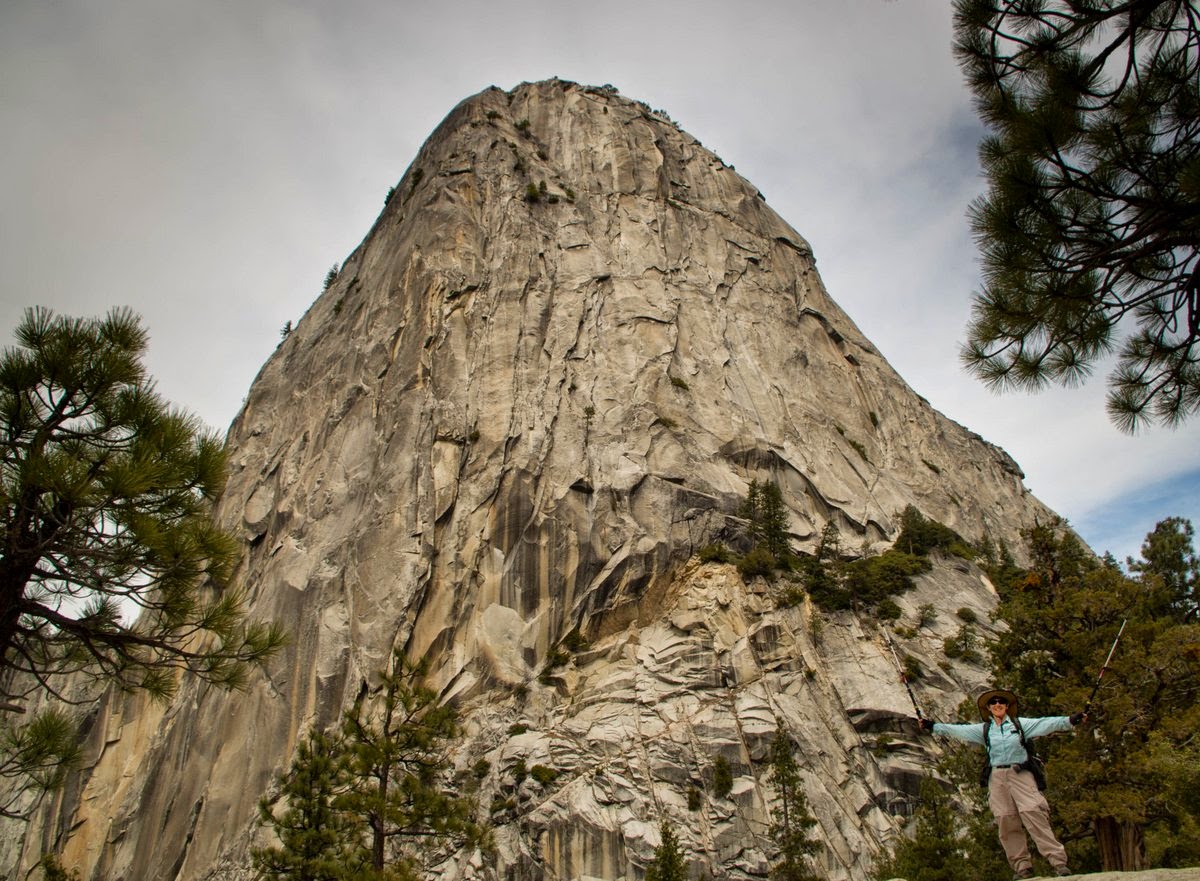 That afternoon, instead of returning on the John Muir Trail loop, we went back down the Mist Trail, hoping for some more rainbow action at Vernal Falls, despite intermittent cloud cover.  We were not disappointed -- the spray shooting horizontally from the “plunge pool” at the base of the falls caught the afternoon sun and provided us with a double rainbow: 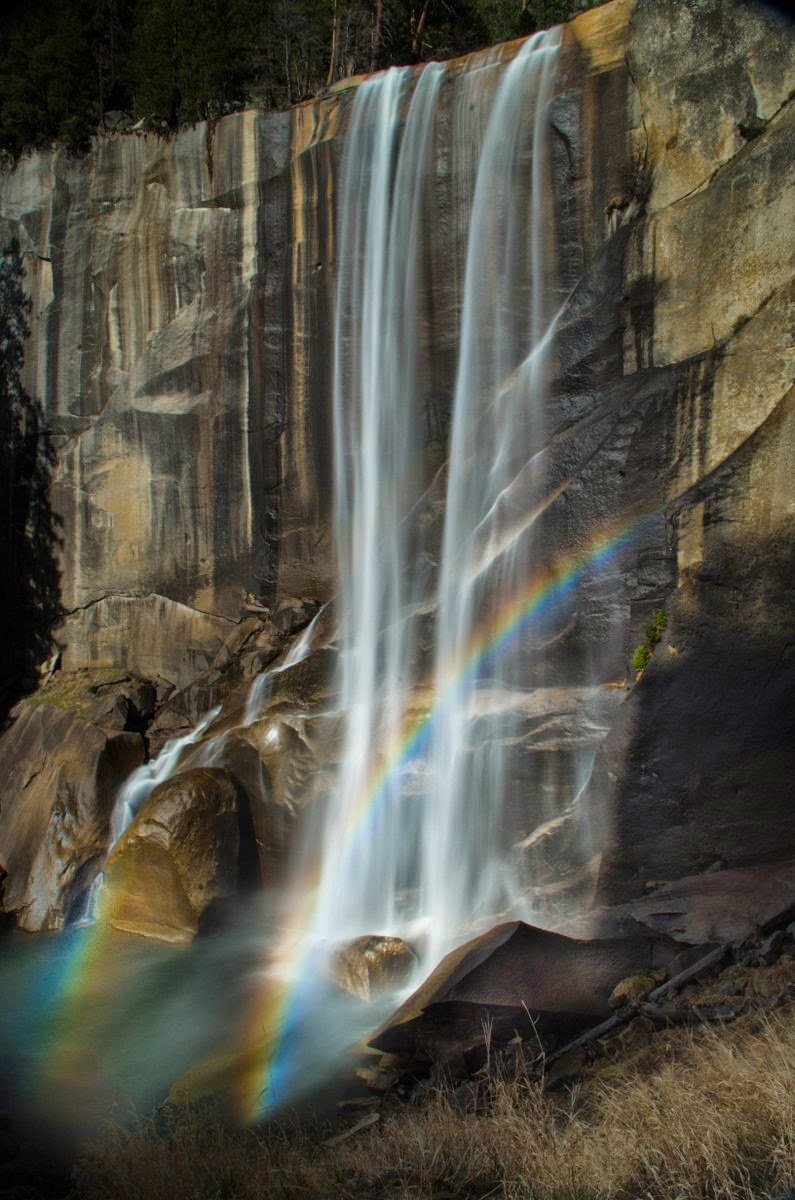 This is a close-up of the primary rainbow -- the rocks looked like they had been cast in bronze: 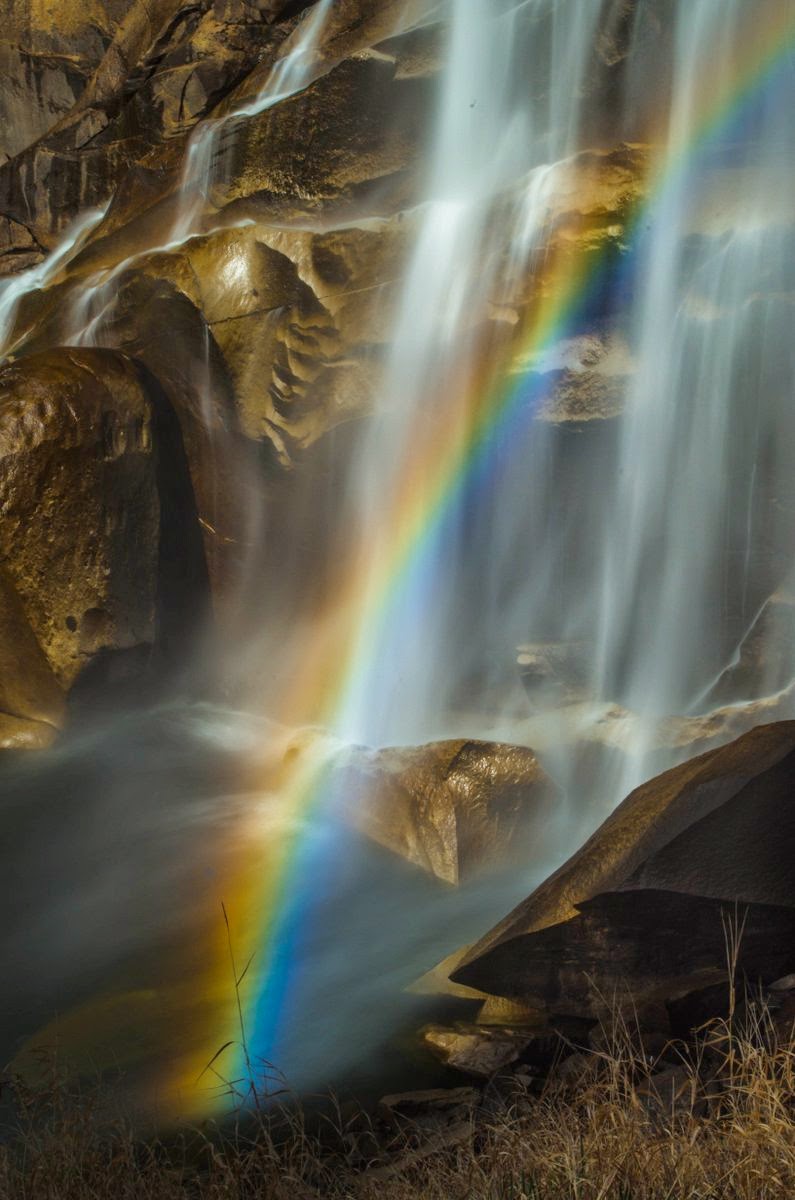 March 12:  It was a cold and rainy morning; but we started up the Yosemite Falls trail.  Our ponchos protected us and our backpacks, and the rain eased up after the first hour.  The clouds lifted -- Half Dome emerged from the fog -- and Felice nailed it: 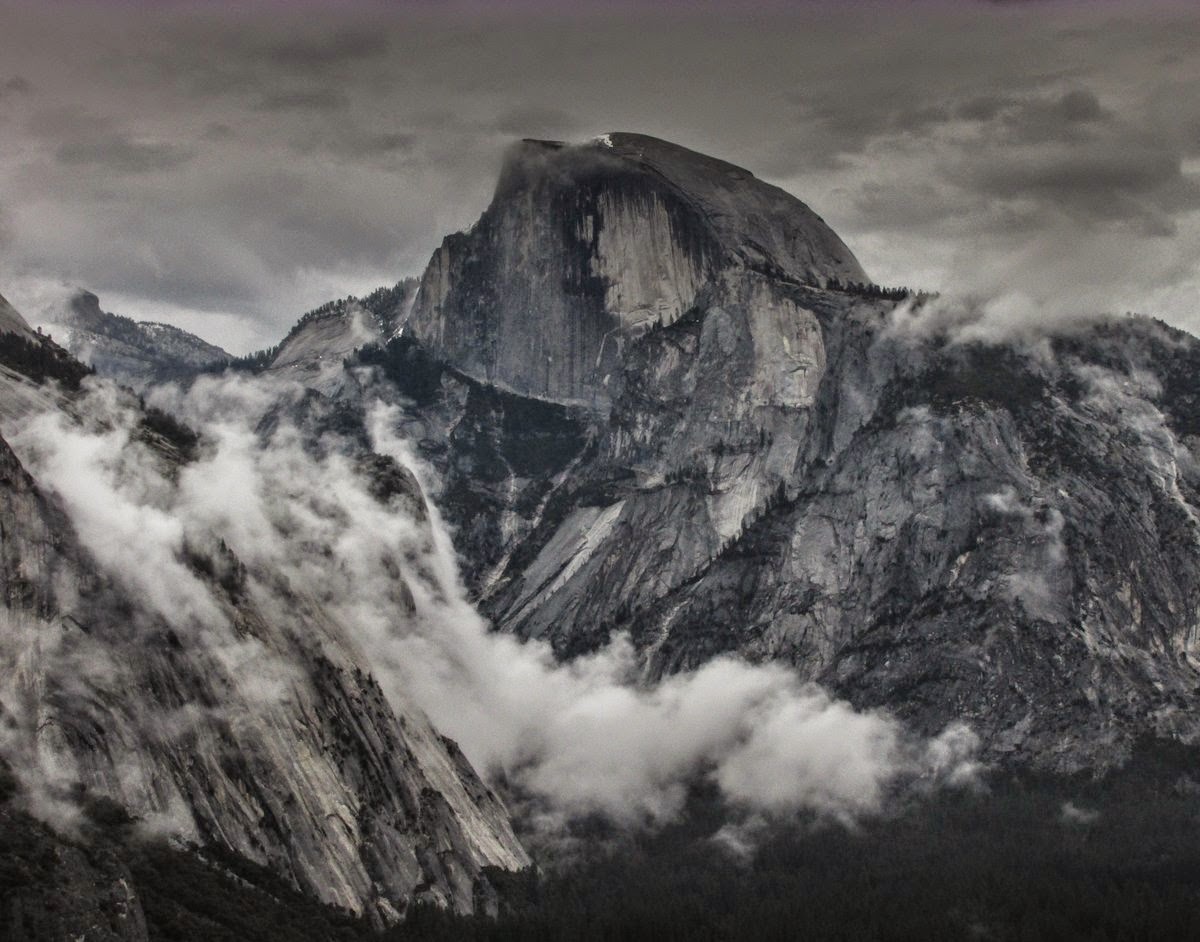 This is a panorama of the east end of Yosemite Valley -- Glacier Point is on the far right, Mt. Starr King is in the right background, then Half Dome, and then North Dome on the left:

One of the best parts of this trail is that instead of looking up at Half Dome and the walls of the valley, we can look across at them -- a very different perspective, albeit at the cost of quite a bit of effort -- it's kind of like going to the gym for six or eight hours, with phenomenal scenery.  After climbing about a thousand feet, we stopped for lunch under an overhang.  A blue jay was hoping for a handout, posing in front of Half Dome: 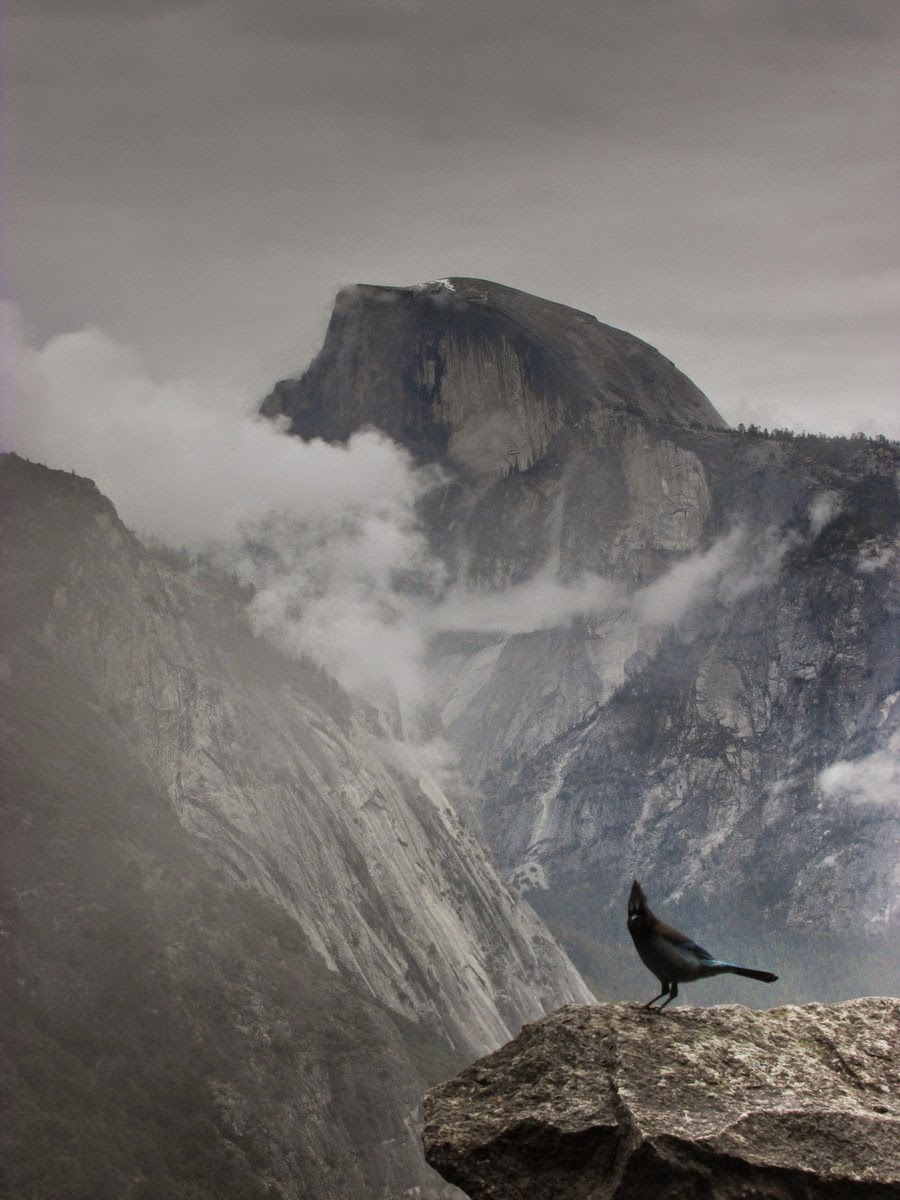 We made it to the base of the Upper Falls -- clouds were floating across the cliff next to us: 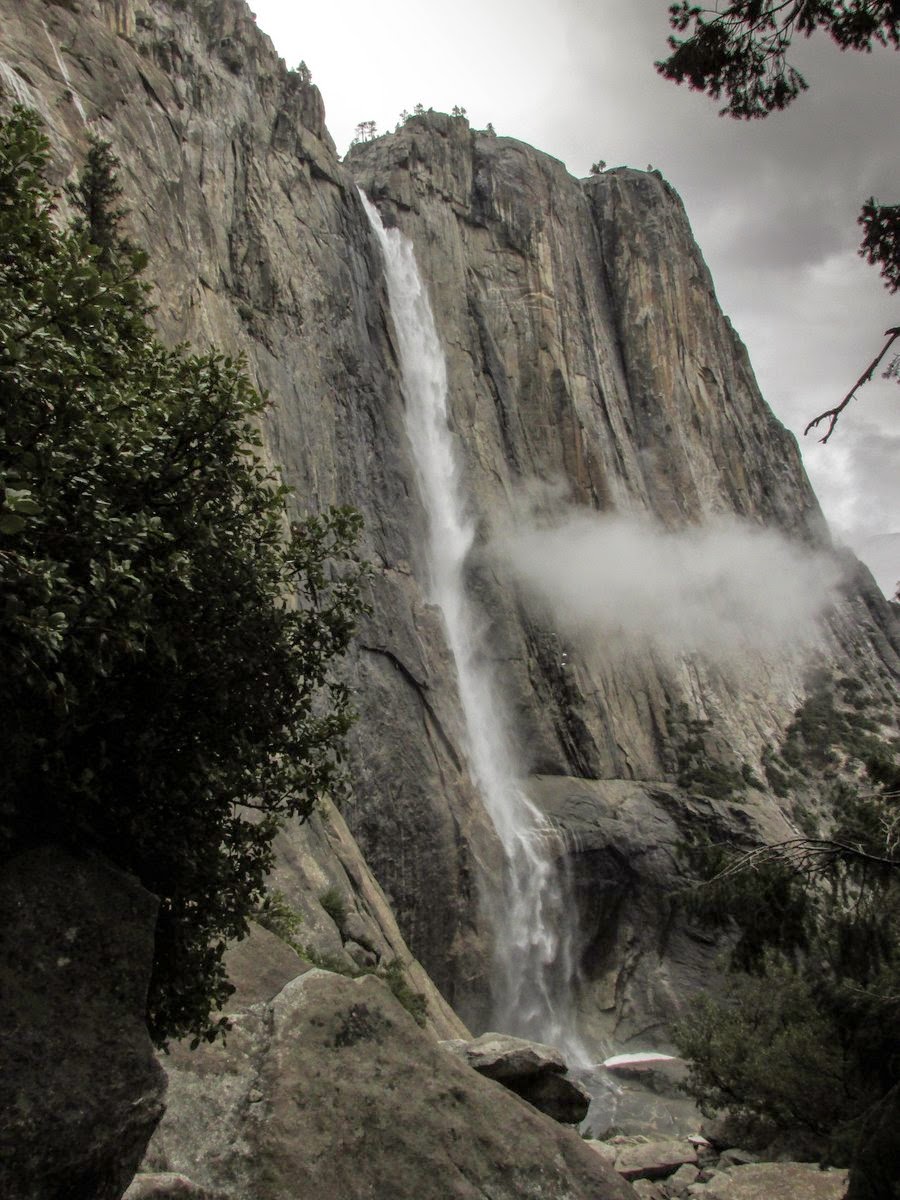 There was still a small patch of snow at the base of the Upper Falls: 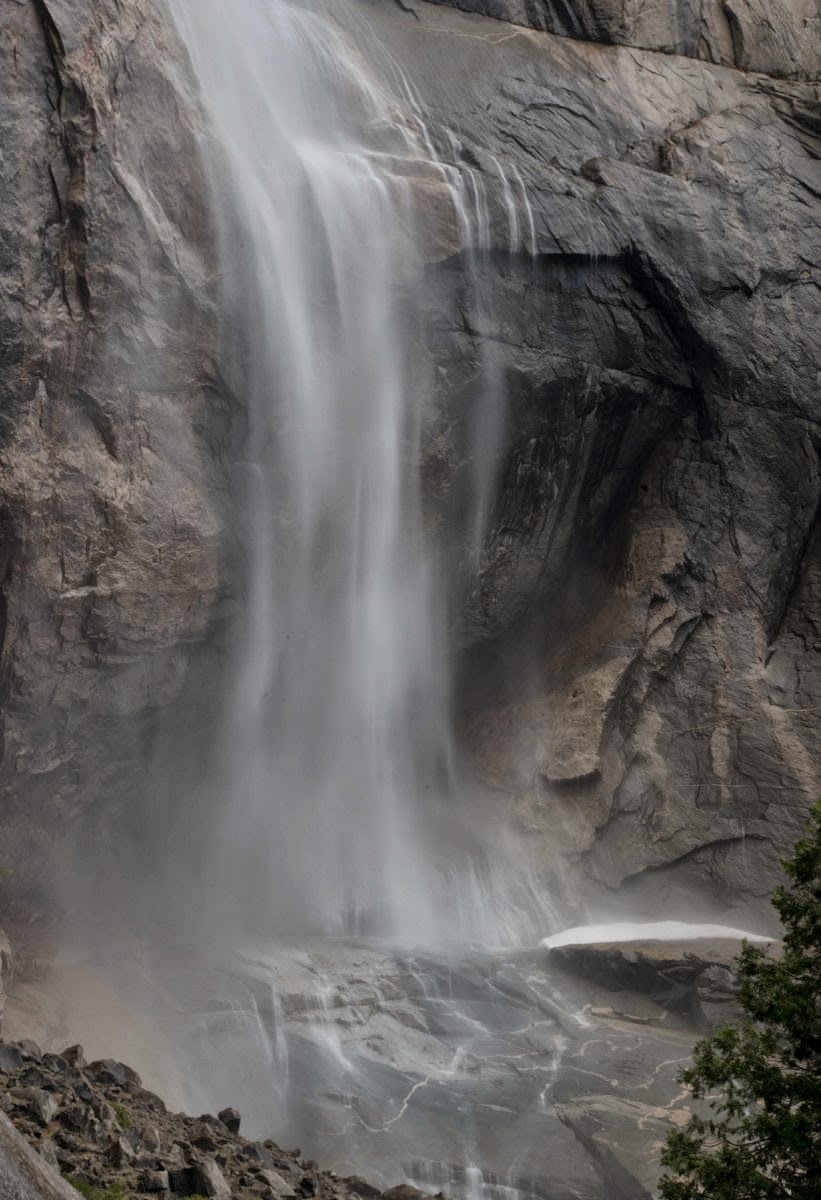 March 12:  The clouds had cleared, and we could see North Dome from our campsite: 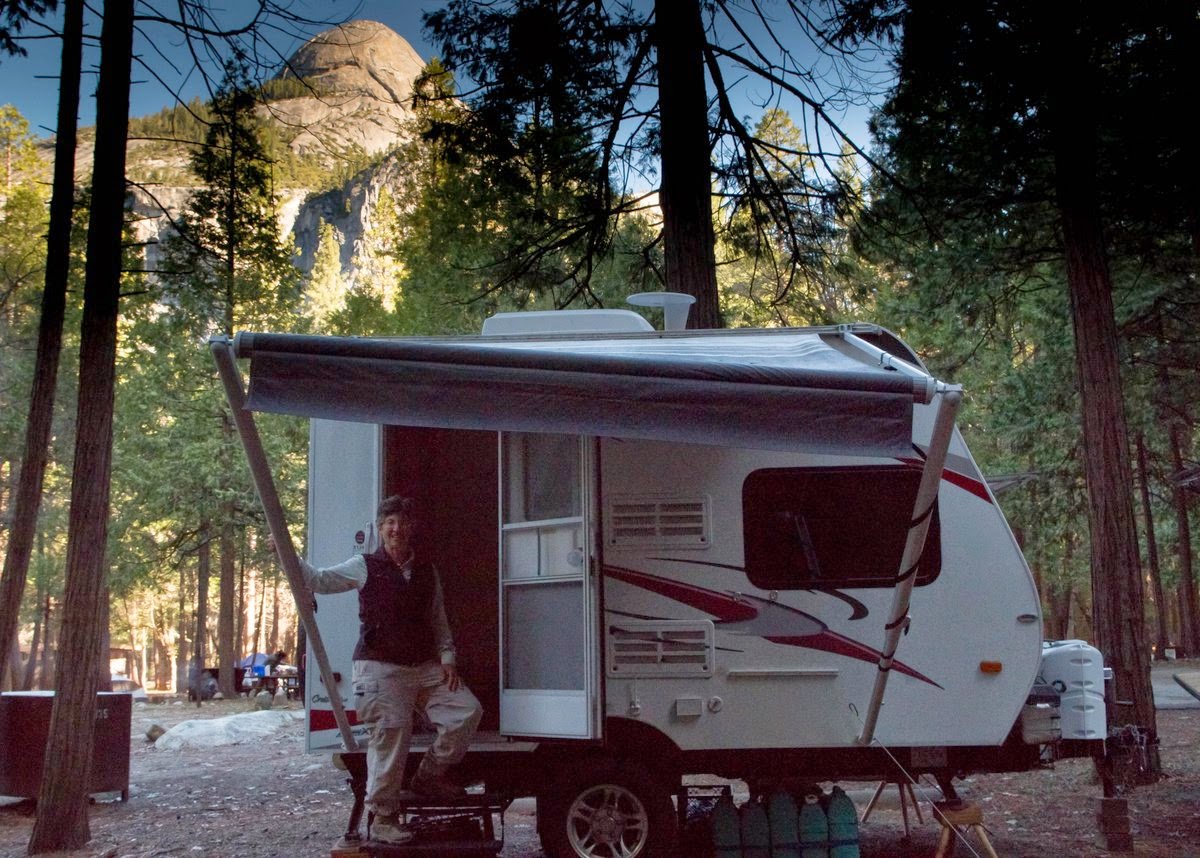 We had been hoping to hike or snowshoe in the Glacier Point area, but the ranger told us that Glacier Point Road was closed -- not due to snow, but paradoxically due to insufficient snow.  The rangers were worried that “yahoos” (in her words) would drive up to Badger Pass and slide down on pieces of cardboard and injure themselves on the exposed rocks; to protect the yahoos from themselves, the entire area was closed, even though the hiking up there would have been great.  So we decided to leave Yosemite Valley and hike in the Hetch Hetchy area.  As we left, we got a shot of the trailer in front of Half Dome: 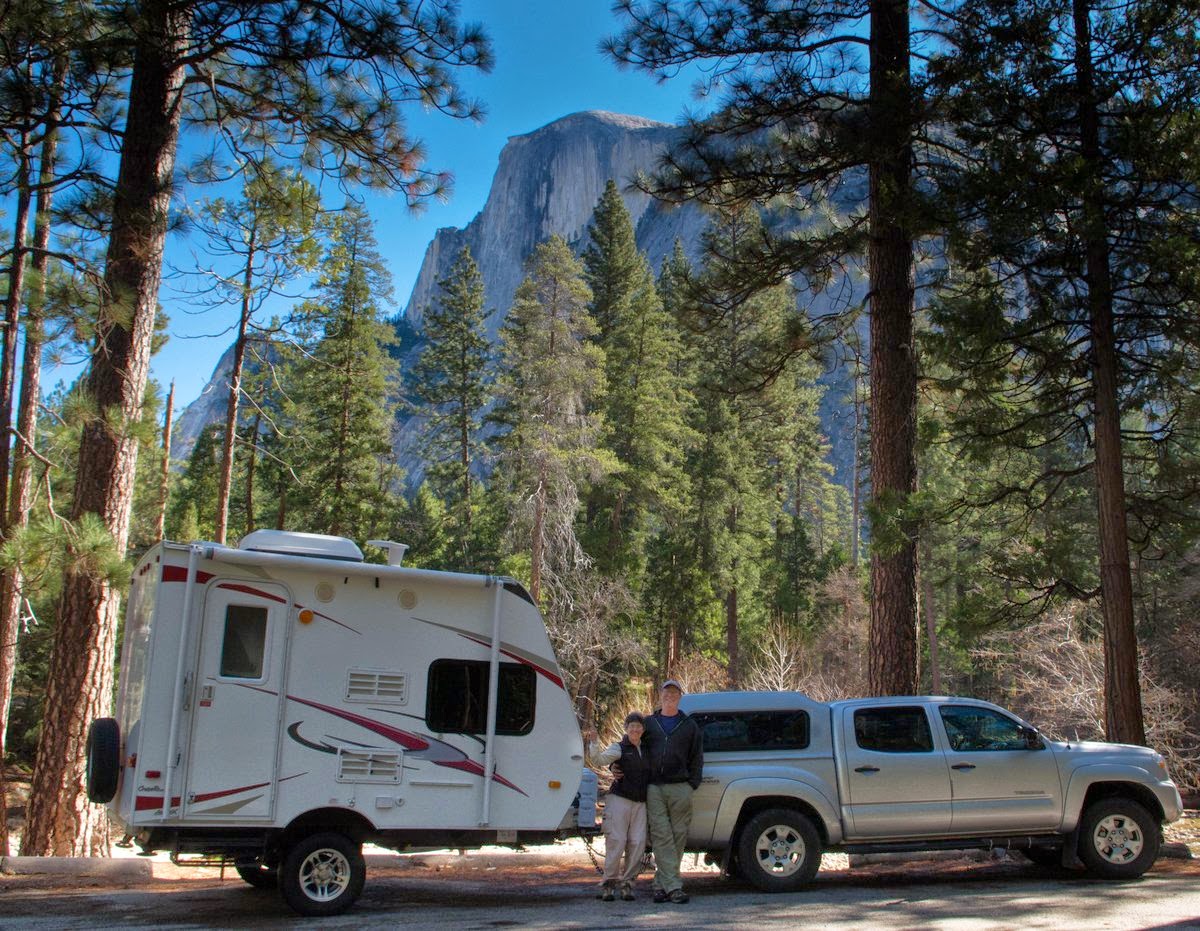 We first checked out Hodgdon Meadow Campground near Big Oak Flat.  The campground was empty, but work crews were busy clearing damaged trees with their chain saws -- too noisy.  We drove onto the Hetch Hetchy road looking for boondocking, but all of the forest roads were closed due to the burn damage from the Rim Fire of 2013.

We stopped to take the Carlon Falls hike -- there was very little burn damage along the trail.  The falls were flowing pretty well: 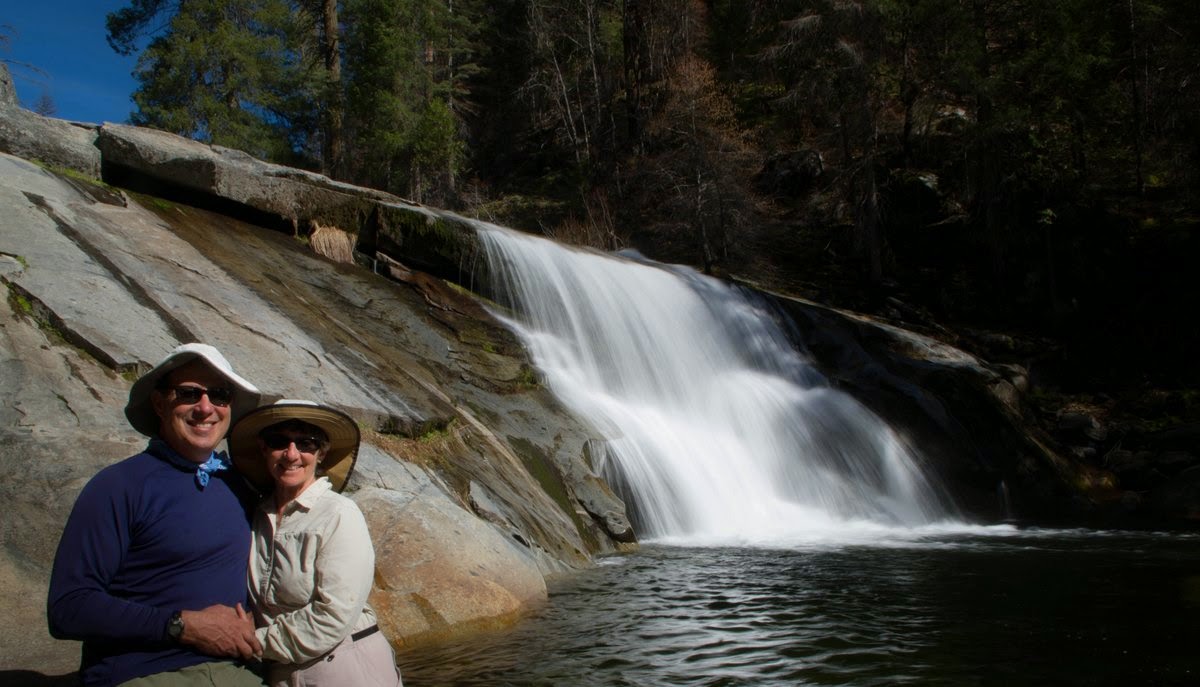 That afternoon, we scouted boondocking sites near Highway 120.  Although some areas were badly burned, there were islands of greenery.  We found a quiet and secluded campsite not too far from the intersection of the highway and the Hetch Hetchy road -- the dirt road into the campsite was very rough, and we were grateful for the extra ground clearance on the trailer: 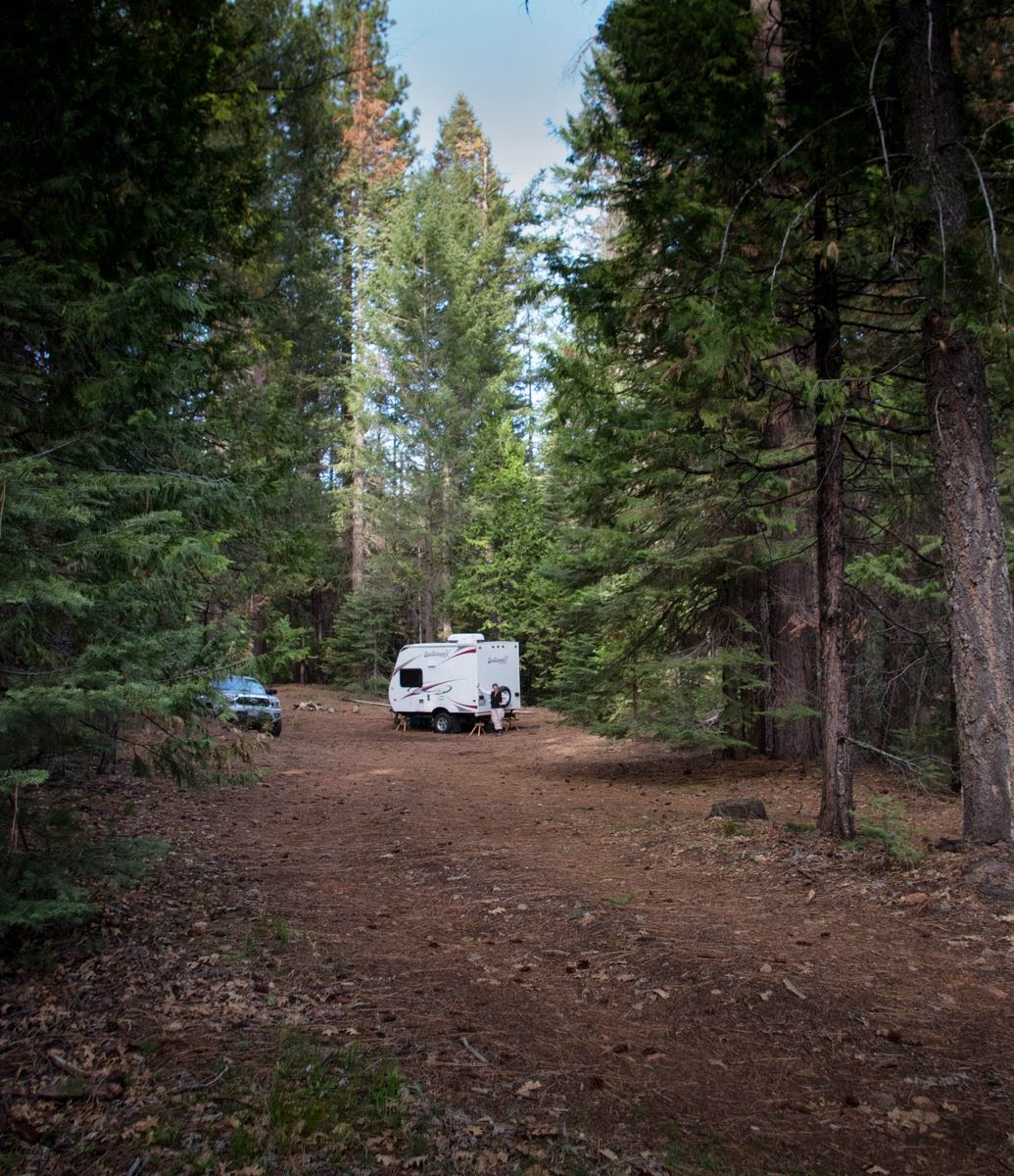 March 13:  We hiked to Wapama Falls at Hetch Hetchy Reservoir.  On the map, Hetch Hetchy looks close to Yosemite, but don’t be fooled -- it is a long drive on a slow road.  There was quite a bit of burn damage along the road and on the trail, and there was not much shade.  The rocks and cliffs were very warm in the strong sunlight -- I would not recommend this trail during the summer!  The Hetch Hetchy Valley was scenic, but it is not on par with Yosemite Valley, despite what John Muir thought.  The falls themselves are spectacular, very loud and powerful, dropping over a thousand feet in three stages: 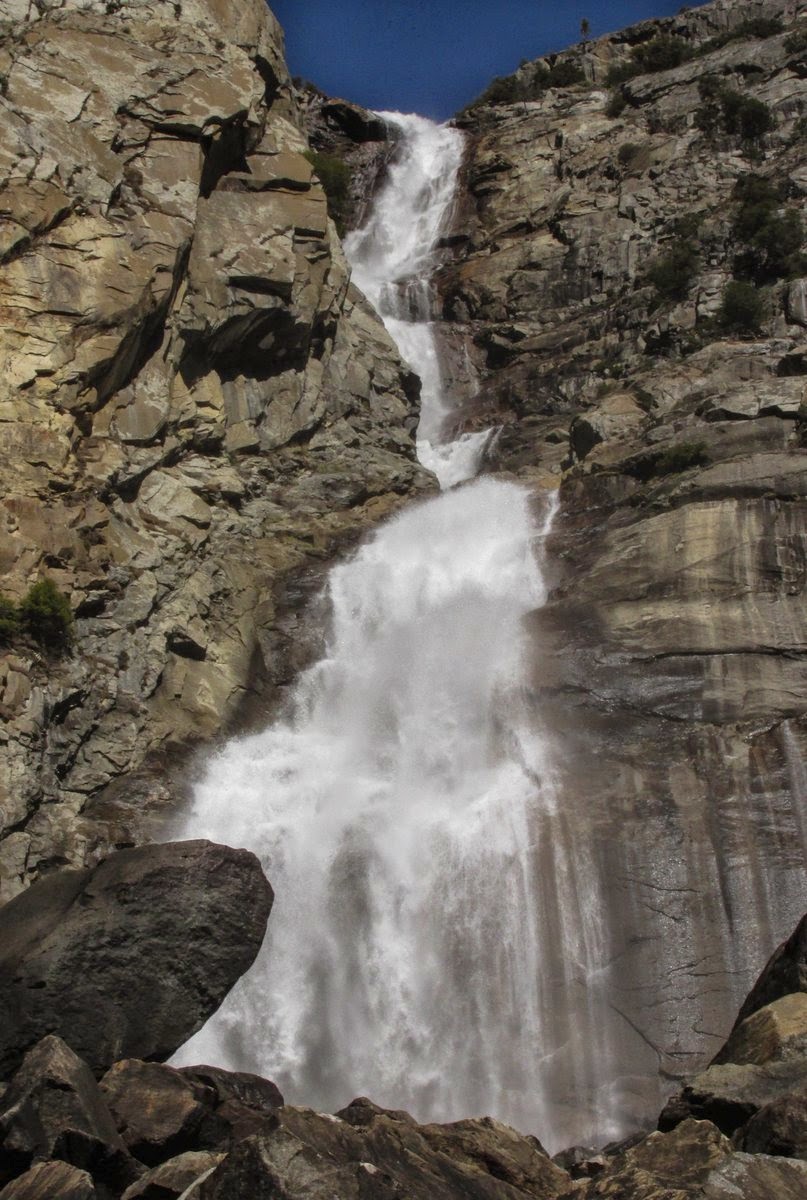 Unfortunately, there is no way to get to the actual base of the falls without climbing gear.  The trail goes to some bridges that cross a talus slope beneath the falls.  Even that is pretty great, since the outflow from the falls cascades over and around huge boulders in the talus field.  Felice clambered down into the rocks to get wet in the cold spray: 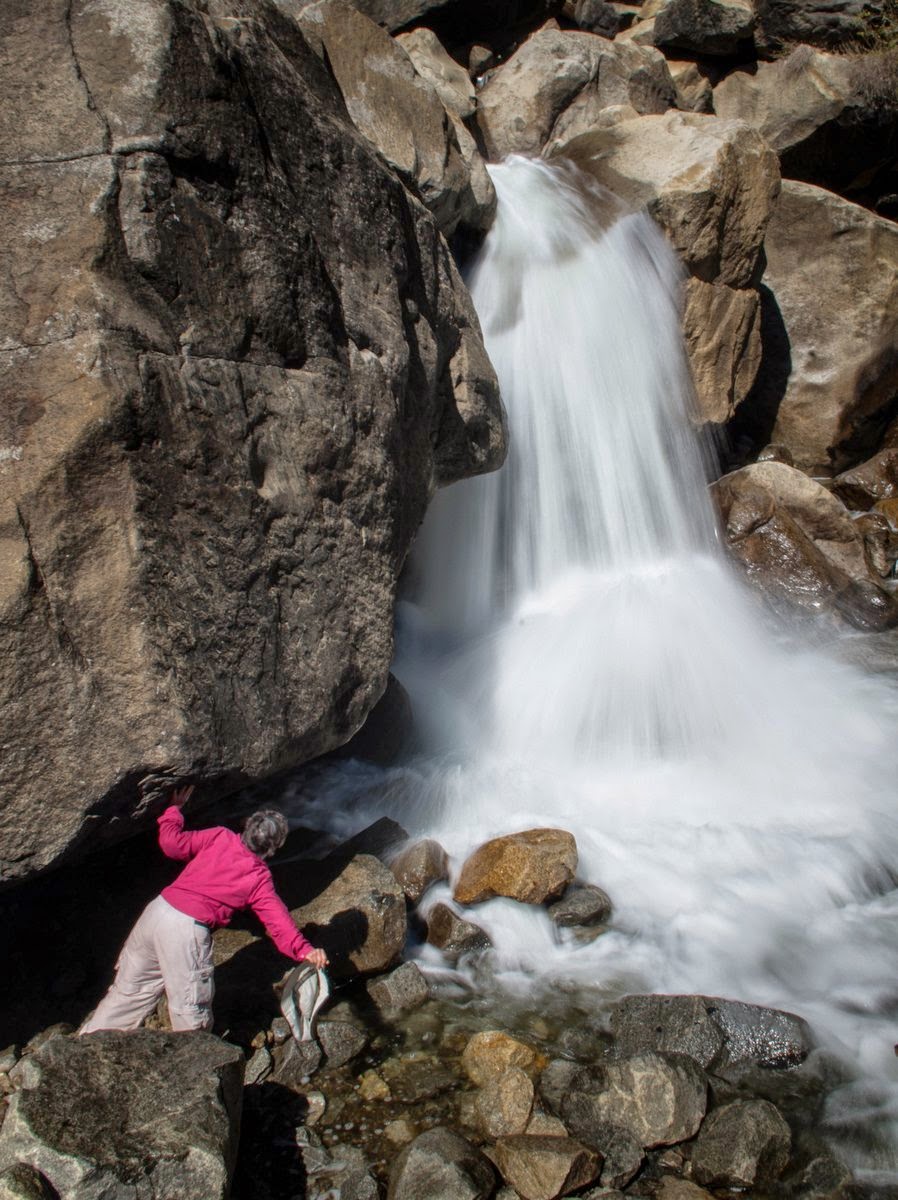 On the way back, we came across a red Sierra newt, just hanging out in a small pool, enjoying the sunshine: 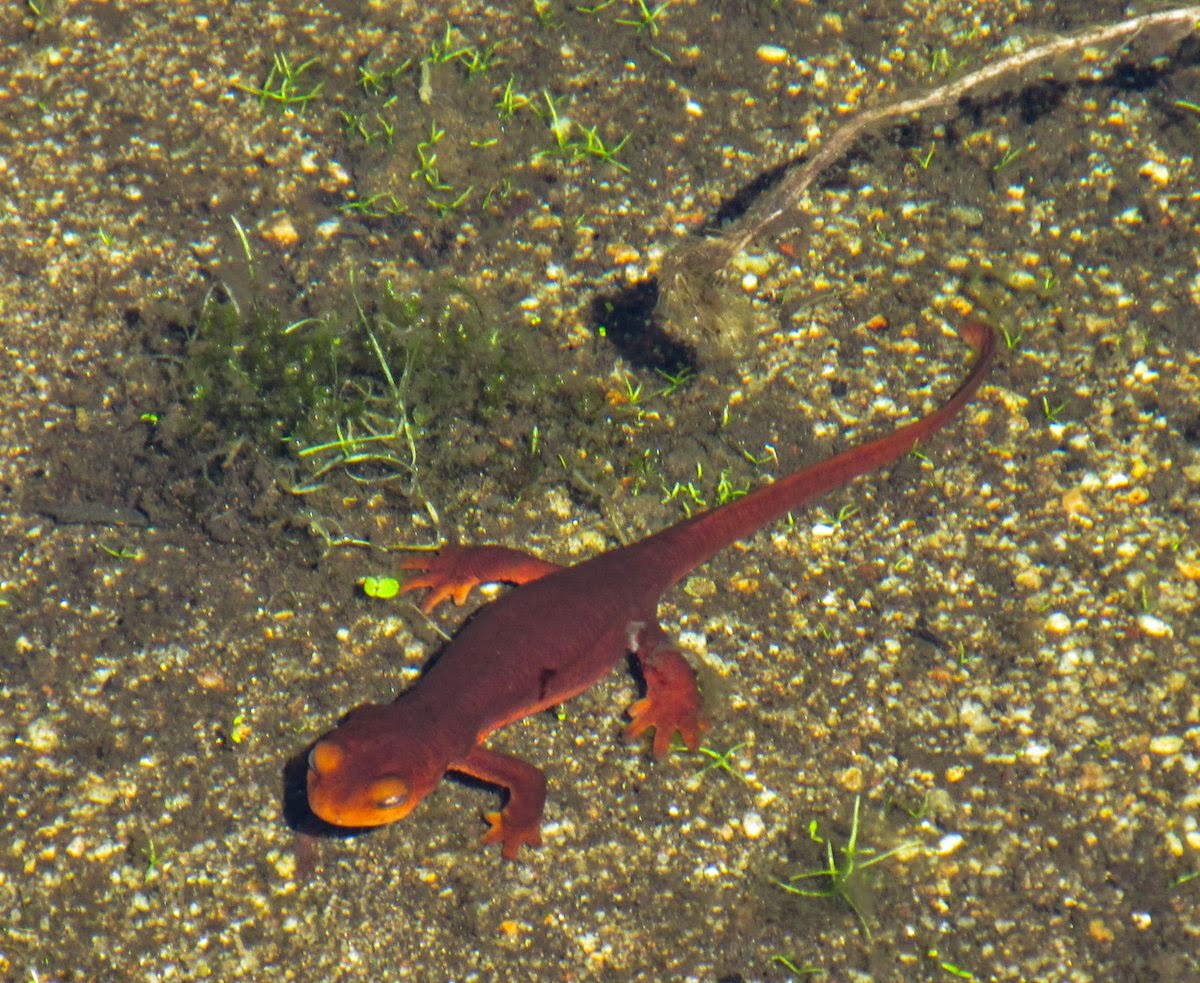 That afternoon, after leaving Hetch Hetchy, we drove up Highway 120 to the Merced Grove trailhead -- it was a lot cooler in the high country.  The hike down to the grove was fairly easy -- just a three mile round trip, within range of a snowshoe hike (if we ever get snow again).  There were only about 20 sequoias in the grove, but Felice and I were happy to see our old friends: 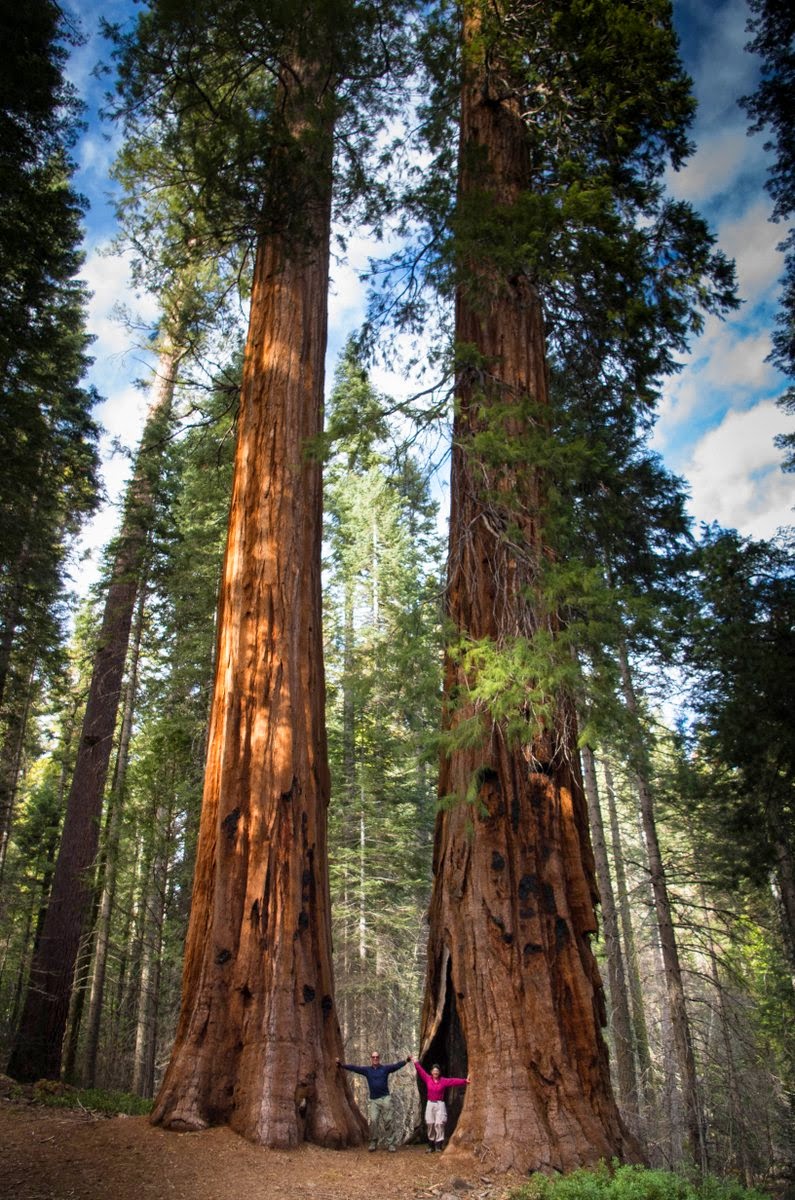 This is a “colonnade,” in which all four trees originally sprouted from a single downed “nurse log” and are therefore perfectly aligned in a row, even though the nurse log is long gone: 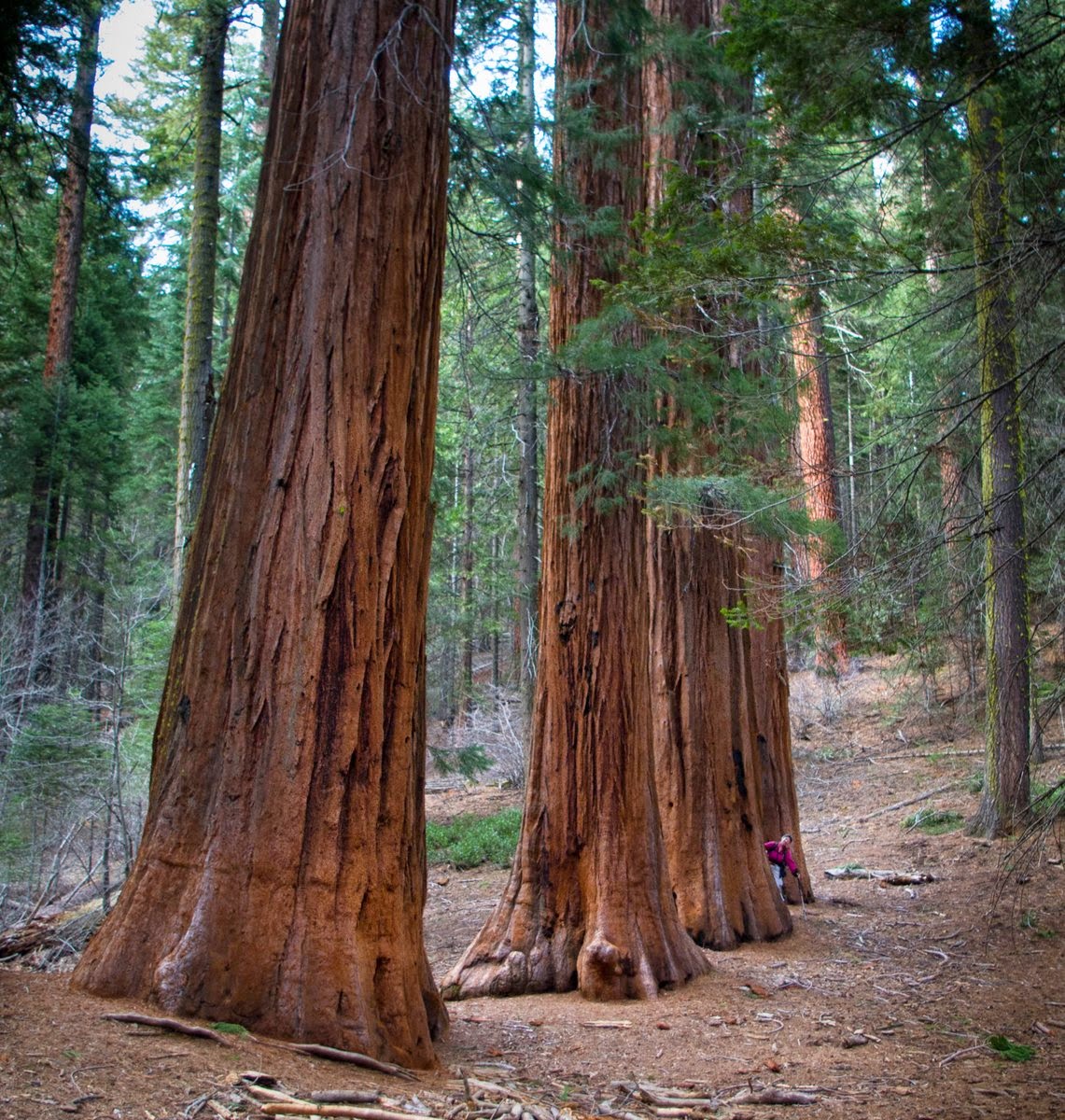 March 14:  The drive home from the Hetch Hetchy area, via Highway 120, was about an hour and a half longer than the drive to Yosemite Valley via Highway 41.  But on the bright side, we scored some outstanding calzone at Two Guys Pizzeria in Groveland!
Posted by Dan Schechter at 6:14 PM 3 comments: