(Remember that you can click on the photos to see a slideshow, and then hit "escape" to get back to the text.  Also, a note on the photo credits: as always, both Felice and I took these shots, and many of my shots resulted from her suggestions.  I do the photo editing using Lightroom; my goal is to reproduce just what we saw, as faithfully as possible.)

The plan was to go to Utah in mid-December to watch the Geminid meteor shower, but the forecast was for snow and clouds – so there was no reason to make such a long drive.  Our second choice was Anza Borrego State Park, in the desert, but that was going to be cloudy, too.  So at the last minute, we gave up on the meteors and decided on Yosemite – if we timed it right, we might be able to get a week between the winter storms.  And that’s exactly how it worked out.

Sunday, Dec. 13:  We drove to Coarsegold in the rain and stayed at the KOA, which was muddy and deserted.

Monday, Dec. 14:  We checked the road conditions:  Highway 41 was snowy, with long stretches of chain controls.  So we took the longer (but lower altitude) route, Highway 49 to 140 through El Portal, a pleasant but unspectacular road.  We pulled into Yosemite Valley just as the storm was clearing out – all of the trees were thickly coated with snow and ice:

Felice took this shot looking straight up through a maze of snowy twigs – she said it looked like Japanese calligraphy:

The white trees were reflected in the dark Merced River -- Felice took this shot with a point and shoot camera, and then I muted the colors in Lightroom:
The sun hit Yosemite Falls, creating a faint rainbow – later in the week, we got a lot closer to that rainbow: 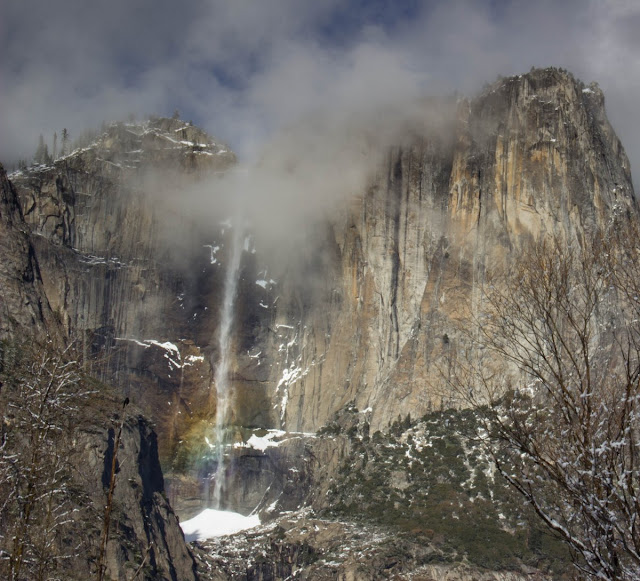 We saw a coyote hunting mice in the meadow:

Another coyote turned to look directly at us – this was taken with a zoom lens: 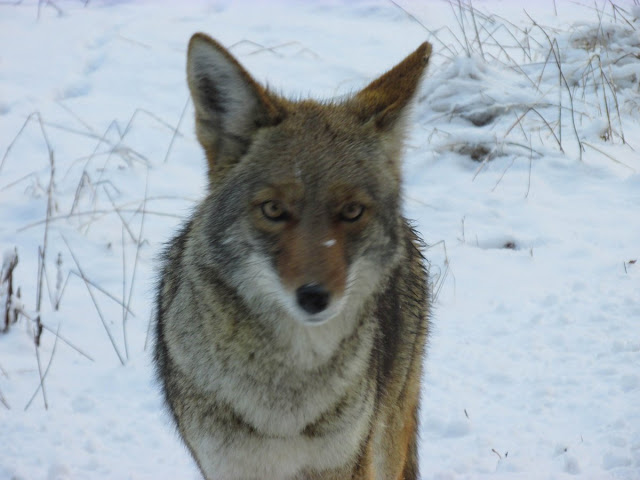 (During the week, we saw several coyotes in different parts of the park, something we had never seen before.)  Later that afternoon, as we approached the campground, Half Dome loomed overhead – we took a lot of shots of Half Dome during the week: 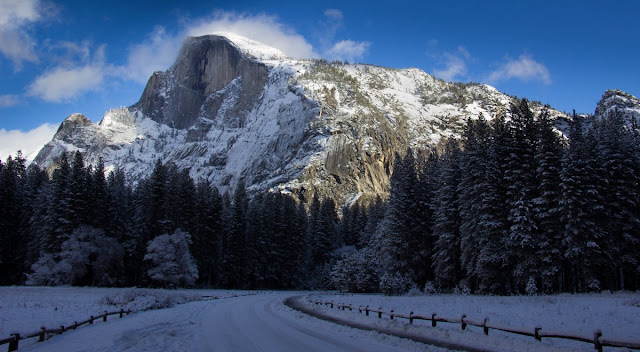 We were practically alone in the campground, which is not too surprising, since it was covered in six inches of snow and very cold: 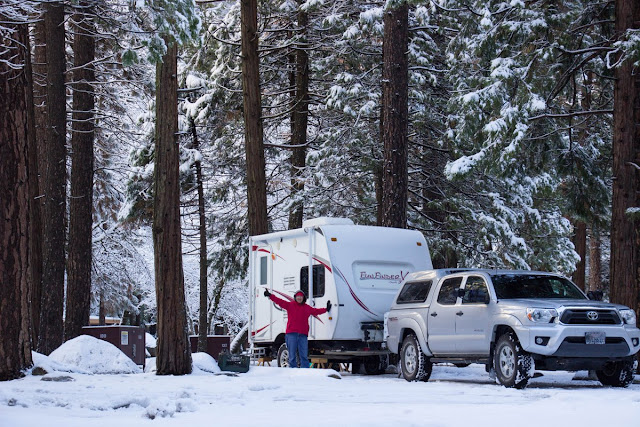 We tried to find a campsite with a good view of Half Dome, but there were too many trees in the way.  We could see the dome from the front of the trailer:

That evening was the first real-world test of our new “hot water recirculation” method of keeping the water tank and water lines from freezing – we ran a hose from the water faucet, through the door to the outside shower, and into the fill tube for the water tank.  Several times a day (mostly in the evening), we ran several gallons of hot water into the tank.  And even though it was in the teens every night, and rarely got above freezing during the day, we had no problems at all!  If you are interested in more details about this crude (but adequate) method, here is a link to our “trailer modifications” blog:
Tuesday, Dec. 15:  After a lapse of about 15 years, we decided to try downhill skiing again.  Badger Pass was the perfect place to brush off the cobwebs – excellent snow, no lift lines, and gentle terrain: 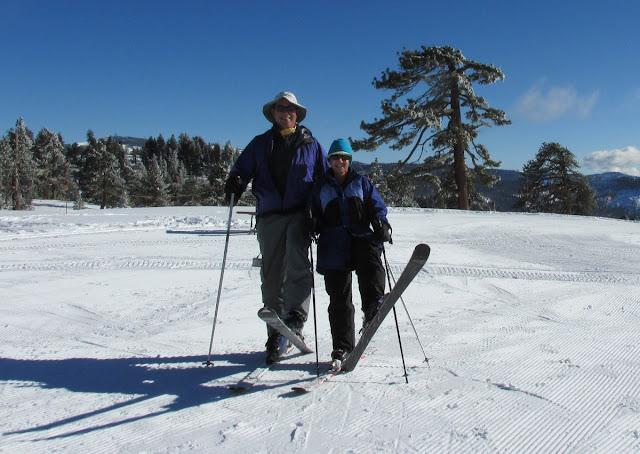 We took as many runs as we could handle – we were tired after four hours of skiing.  The slopes were completely empty – note that in this shot, some of the morning’s groomed corduroy snow is still intact in the late afternoon:

We are not great skiers, but it was pleasant to cruise along on intermediate runs:


That evening, Half Dome caught the sunset: 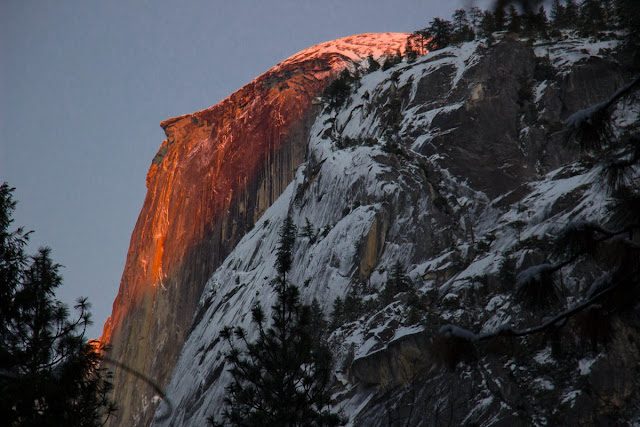 After dinner, we bundled up and took a walk to the bridge over the Merced near the campground – Orion was rising over a group of snowy trees: 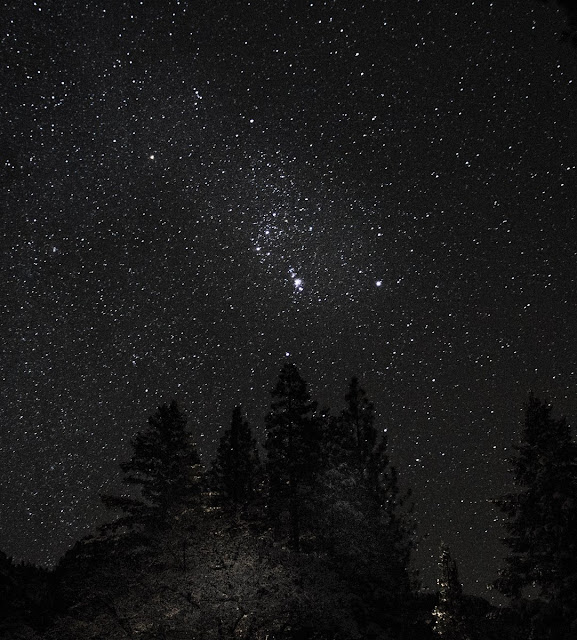 Wednesday, Dec. 16:  Because it was so dark, cold (32 degrees inside the trailer in the morning!), and silent, we slept in until 8:20, an unheard-of time for us.  So we got an unusually late start on the day’s hike (a snowshoe trek to Dewey Point), but it was worth it to sleep for nine hours – what a rare luxury! 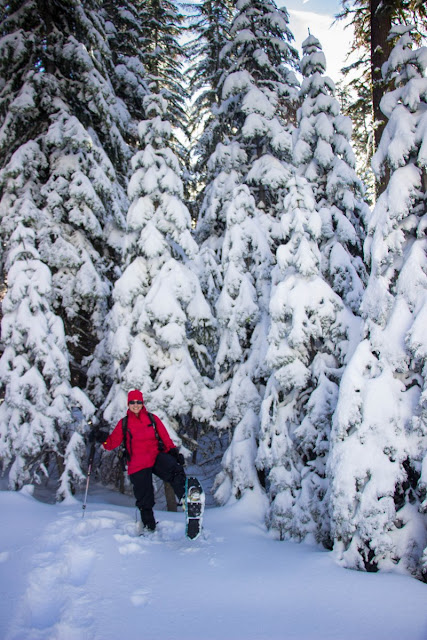 The hike was fun but pretty arduous – the snow was deep (although the trail had been lightly packed), the hills were steep, and the round trip was about seven miles, which is a long way on snowshoes.  But it was well worth it – the visibility was unlimited: 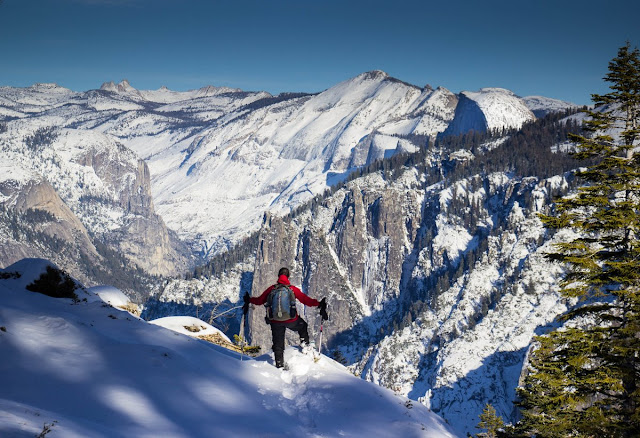 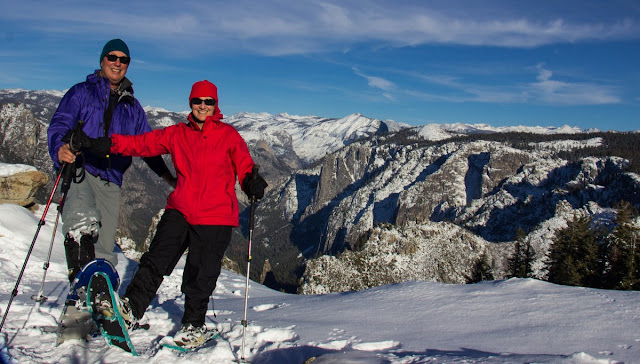 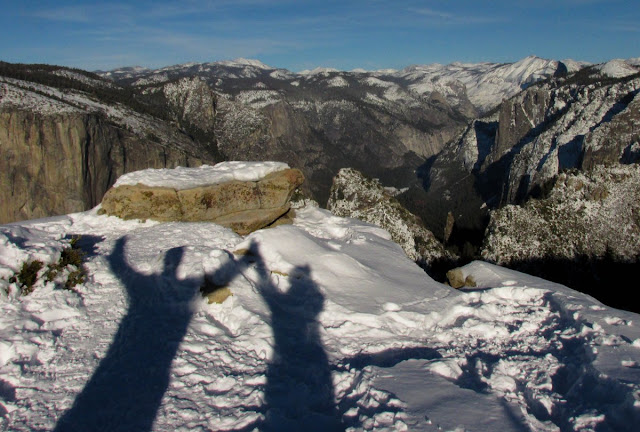 The trail was so long that we got back to the truck just as it got dark, which is not our usual “safety first” style of hiking.  (We were prepared to hike in the dark, but that is not our first choice.)  But as a result, we got to the famous Tunnel View turnout long after sunset, which meant that we got to see the stars over Yosemite Valley, a rare treat.  It was very cold (about 20 degrees), and there was thick ice everywhere, but it was well worth the difficulty.  There was a quarter moon low in the western sky, which illuminated the snow on El Capitan, Half Dome, and all of the surrounding high country: 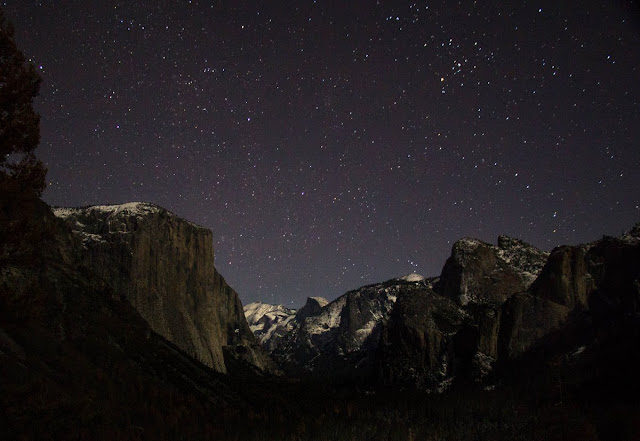 That night, as on every night of this cold trip, we had hot soup for dinner.  And every night we had hot chocolate, with a splash of half-and-half and a larger splash of spiced rum, to accompany dessert.  (If this sounds pleasant and civilized, it certainly was.)

Thursday, Dec. 17:  We headed up the icy trail to Upper Yosemite Falls, hoping to see (and hear) the ice falling off the cliffs – we were not disappointed!  Since it had not snowed in several days, most of the ice had already fallen from the cliffs above the trail (fortunately), but the spray from the falls had frozen onto the rocks and would periodically crack away from the wall and plunge down into the canyon.  It sounded exactly like thunder from a nearby lightning strike:  Crack! Boom!

This shot is taken from one of our all-time favorite lunch spots – there are dry flat rocks for comfortable seating, with a great view of the upper valley.  Those red things on our boots are microspikes -- we could not have taken this hike on such an icy trail without them: 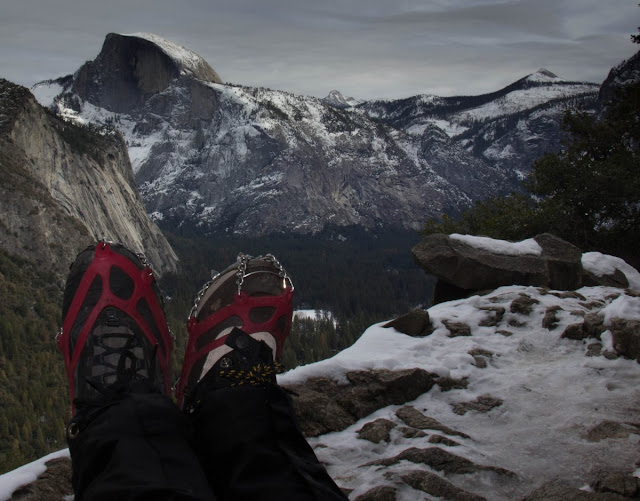 This video was taken on an iPhone 6, so the quality is not great:


The clouds cleared up just as we got to the base of the falls: 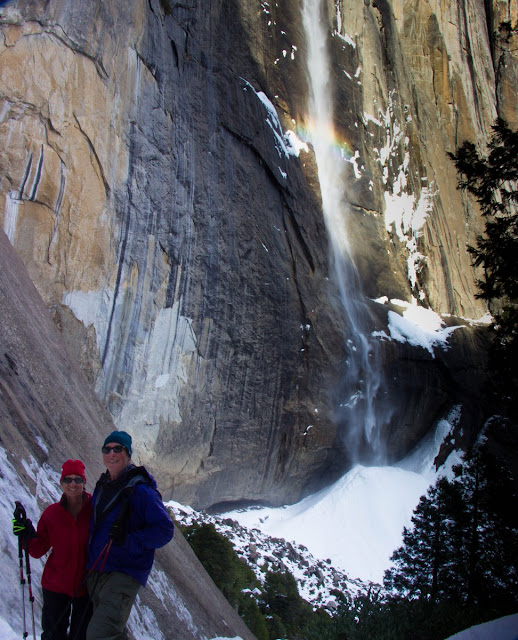 This shot of the rainbow is a little deceptive – the colors are accurate, but it was taken with a zoom lens from about a hundred yards away.  We got lucky with this picture -- the shadow of the nearby cliff had already fallen on the rock behind the rainbow, but it had not yet reached the falls themselves, so that the contrast between the rainbow and the rock was really sharp: 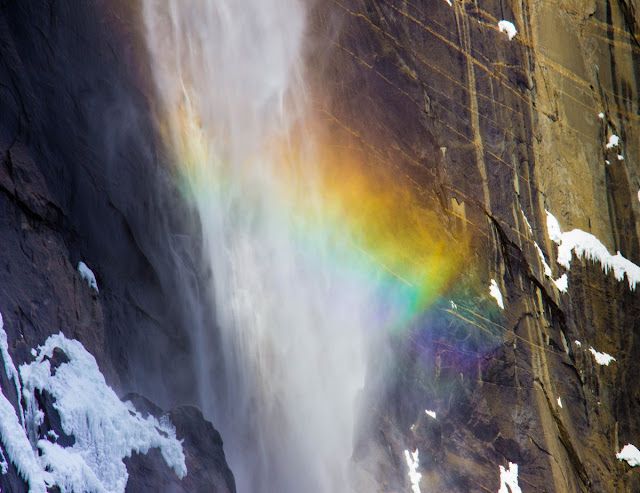 As we descended, Half Dome loomed across the valley: 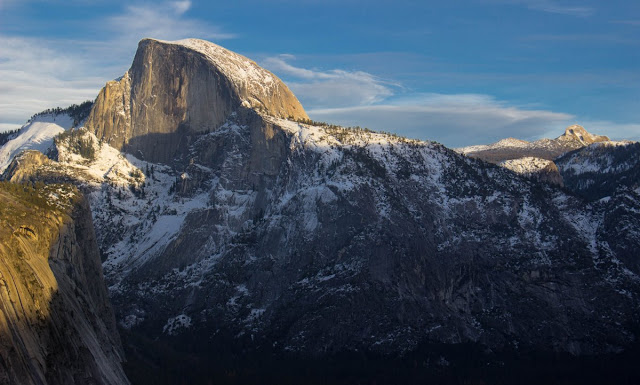 The slanting afternoon light and the thin coating of snow on the meadow below us revealed fossil meanders near the river – the river used to flow in big loops through the meadow, but the river cut off the neck of the loop during a flood and stranded the meanders as “oxbow lakes,” which later filled in with sediment -- ordinarily, these features would be obscured by the long grass in the meadow: 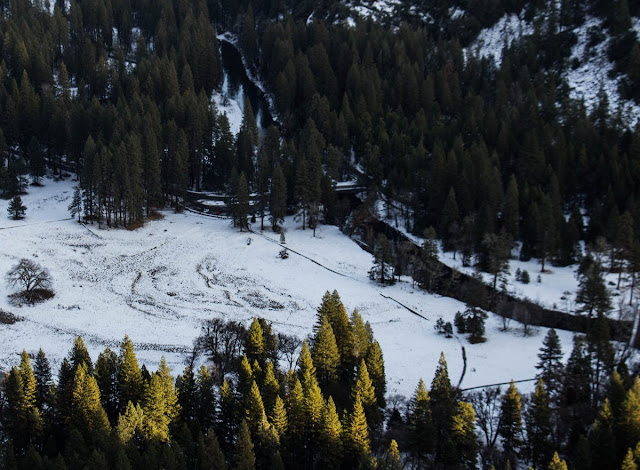 We made it back down to the trailhead just before sunset, and (of course) Half Dome treated us to another show: 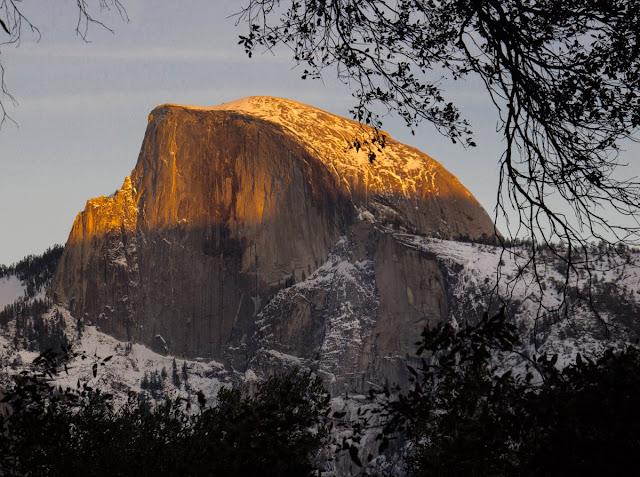 Back at the campground, we had to run the generator for 90 minutes, something we almost never do.  But the campsite was so shady (because of the trees and the canyon walls) that our solar panel was not putting enough juice back into the battery, especially since we were using much more power than usual for the heater and for the water pump (to run the hot water recirculation system).

Friday, December 18:  We took the trail out of Happy Isles toward Vernal and Nevada Falls.  Much of the first part of the trail was steep asphalt covered with ice; we soon strapped on our microspikes.  The late-morning sun was rising over the canyon wall, backlighting the frosty trees on the ridge: 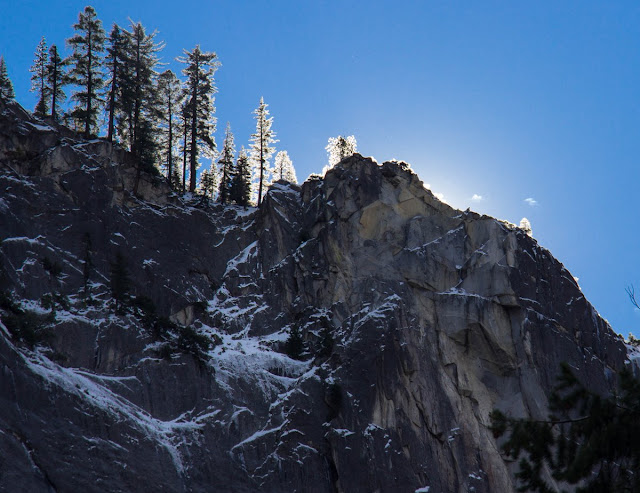 The Illilouette Falls area was covered in snow – and we were pretty sure that the falls itself was frozen, although we could not see it clearly: 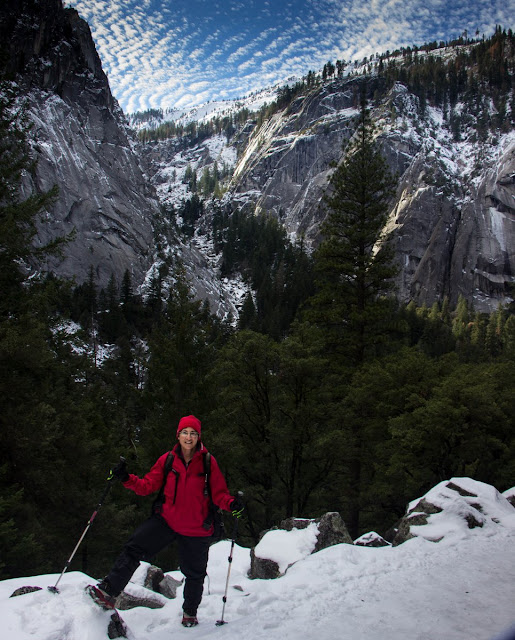 As the switchbacks climbed the east wall of the canyon, we could see across the valley to Yosemite Falls to our north: 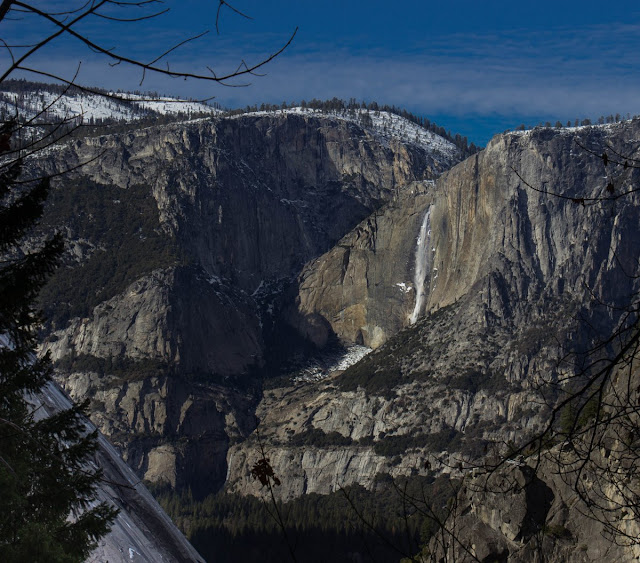 The Glacier Point area was high above us to the west: 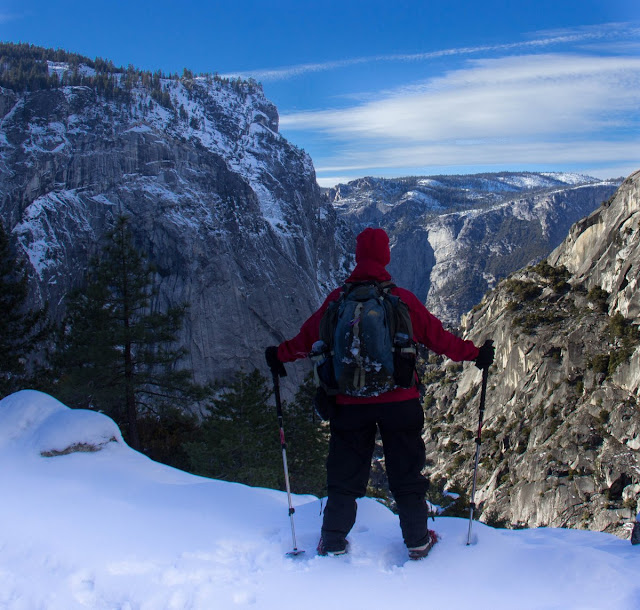 In this shot, the back of Half Dome is on the left, Mt. Broderick is in the middle, and Liberty Cap is on the right: 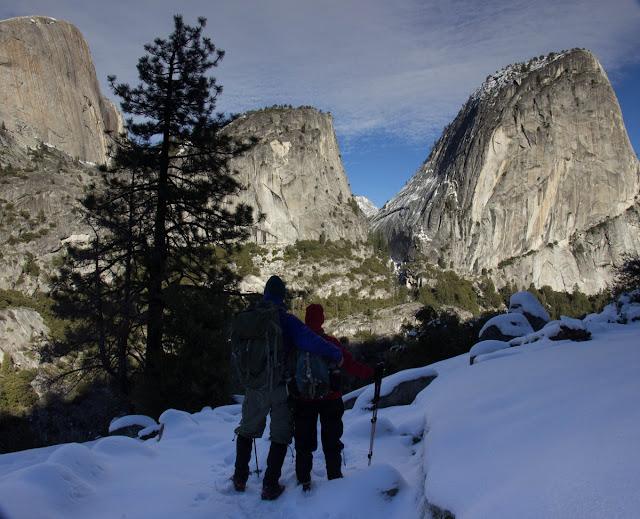 The trail was so slow and snowy that we could not make it to the base of Nevada Falls --- we had to content ourselves with views from a distance: 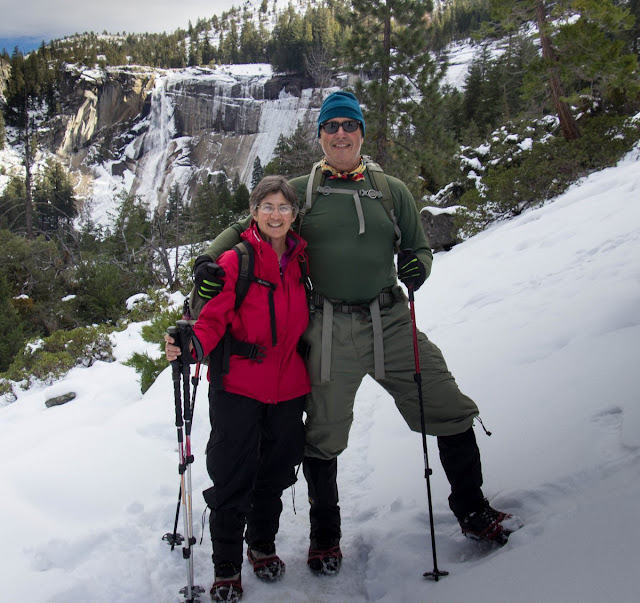 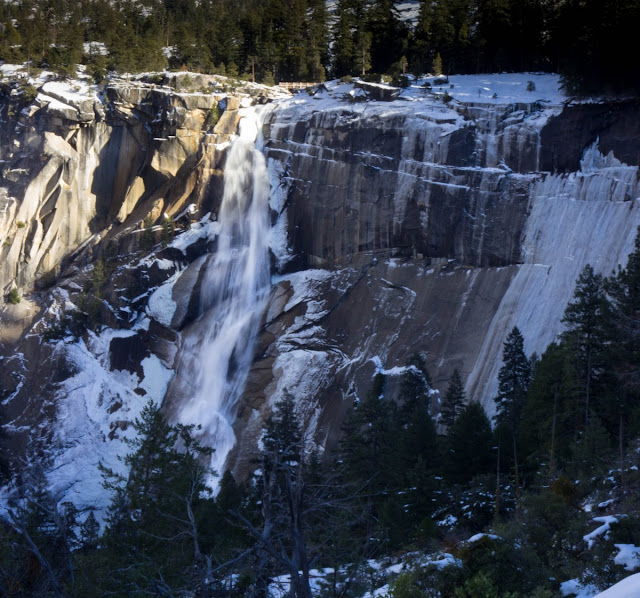 That afternoon, the crust of ice and snow on the south wall of the valley (below Glacier Point) began to fall away.  Each icefall sounded like a jet taking off from the campground – a sudden roar, tailing away to a low rumble.  That evening, Felice could not resist yet another shot of Half Dome from the campsite: 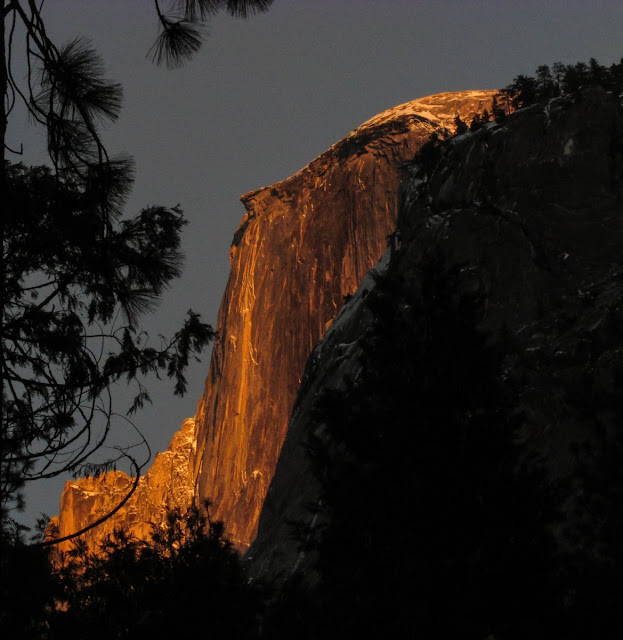 Saturday, Dec. 19:  We packed up our equipment in a slush storm – very wet and cold.  It was a long drive home in the rain – about ten hours, counting a slow trudge across the LA freeway system in the evening.

Overall, this was one of our most strenuous trips, because of the extreme cold – we had to guard against the freezing of the water system, and we were constantly wiping up the condensation dripping from the walls and windows and the snow we tracked into the trailer.  We were dressed in many layers of clothing, which all had to be hung up to dry; but nothing dried much overnight because it was so cold and damp.

On the other hand, we got to have Yosemite Valley all to ourselves, and the cold weather meant that the snow clung to the trees and the cliffs all week, which really added to the already-stunning beauty of the valley and the hiking trails.  We felt really lucky to be able to take this trip – as soon as we left Yosemite, the valley was hit with a week of rain, several inches in total.