After a very long hiatus, we finally got to do a week of camping over spring break in the hills northeast of San Luis Obispo. The rain this year has been a little above average, so the creeks and waterfalls were flowing. (Remember to click on the pictures to enlarge and then click "back".) 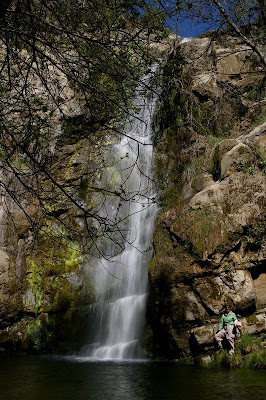 This is "Big Falls," which involved a fairly adventurous drive with 13 deep stream crossings. The road often follows the creek bed; I was glad to have a relatively high clearance four-wheel drive SUV.

We stayed at a KOA near Lake Santa Margarita -- it was considerably more rural, rustic, and quiet than the typical KOA: 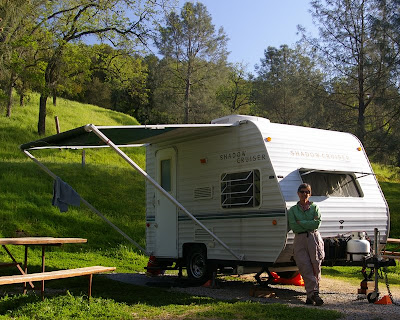 Unless you like hiking or mountain biking, there is not much to do in the mountains of eastern San Luis Obispo County: 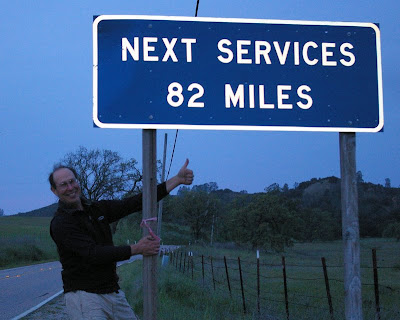 We headed out Highway 58 to Shell Creek Road, a notorious hotspot for springtime flowers: 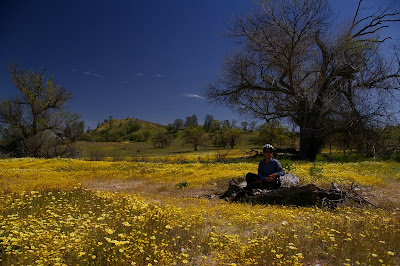 The road goes on for many miles through cattle country:

On another day, we went all the way east to the Carrizo Plain, on the edge of the San Andreas fault. There were carpets of phacelia: 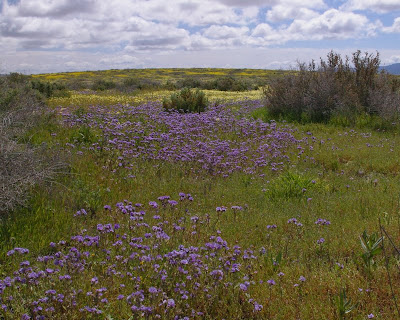 The Carrizo was very wild and primeval -- it's what the San Joaquin Valley used to look like, before it was settled. Here's what phacelia looks like from 6 inches away: 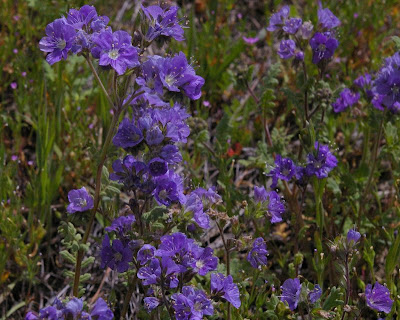 Everywhere we went, the wildflowers put on a fine show. These are baby blue eyes: 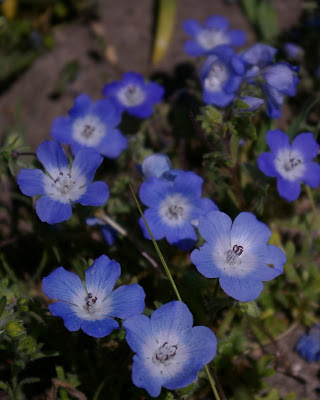 I'm pretty sure these are "tidy tips": 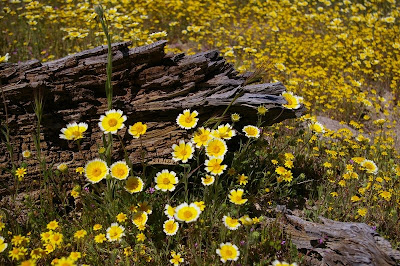 These are shooting stars, which we have seen in the Sierra but never in the Coast Ranges: 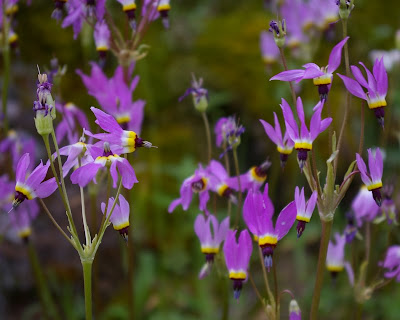 The lupine deserve a category of their own -- there were carpets of them everywhere, smelling like Wal-Mart-brand laundry detergent. Some were bush lupine; others were growing on the ground: 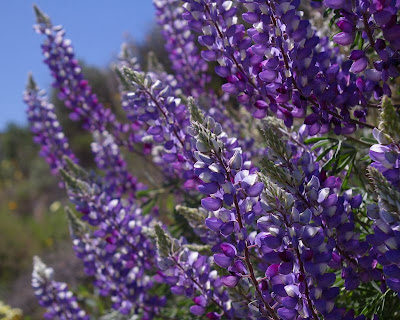 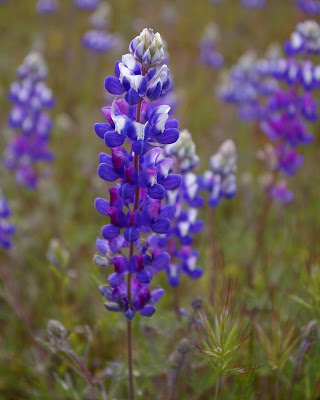 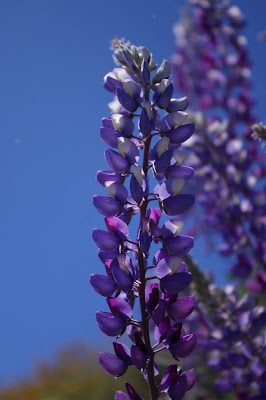 I don't know what this is -- perhaps fireweed. We ran into it in the chaparral and sagebrush on a breezy hilltop, just after a rain shower: 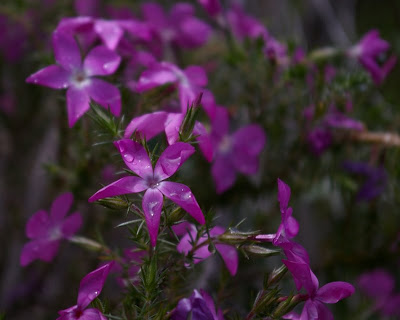 The poppies weren't as overwhelming as we've seen them in other years, but they were still great: 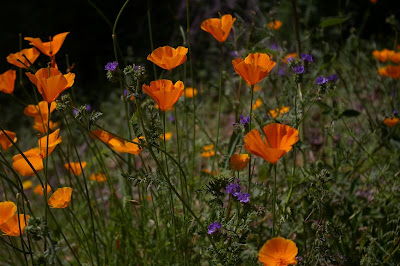 On a stormy afternoon, we took our bikes to Montana de Oro State Park: 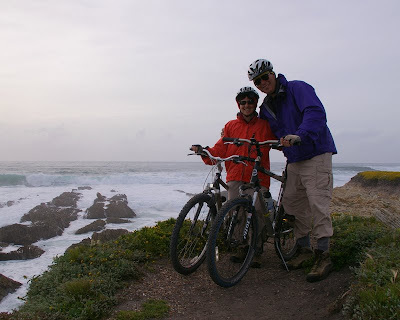 The waves were huge, about 15 feet, and they were smashing into the rocks: 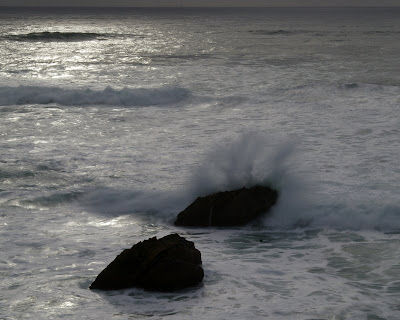 Perhaps because it was spring, we saw a lot of wildlife -- flocks of noisy wild turkey, deer, skunk, a bobcat (we think), and a couple of foxes, who are not good about sitting still for the camera: 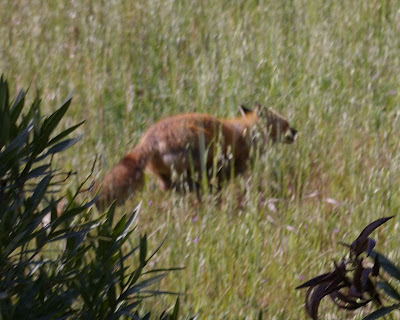 Toward the end of the week, we went mountain biking in the hills above Cal Poly San Luis Obispo. The singletrack was a little too rugged for us: 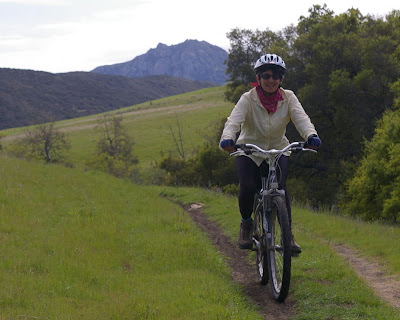 Throughout the area, the landscape is typically Californian -- grassy hills, dotted with old oak trees: 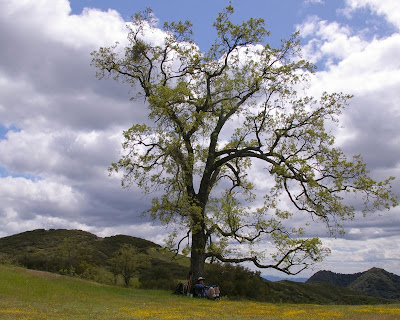 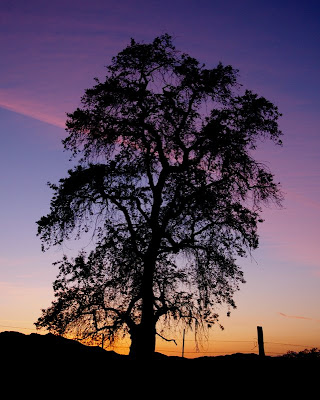