(Note: this blog entry includes a few video clips. You can click on them, or not; they are very short, about 10 seconds each, and the quality is not great because the blog program apparently "compresses" the files somewhat.)

After a long and dull semester, we managed to squeeze in a week of camping. The highway to Cedar Grove had just opened; there was only one campground available. We got a site right on the banks of the Kings River, which was in full spring flood. The campground was virtually empty.

Monday, May 9: We hiked to Mist Falls, one of our favorites. The first part of the hike is usually hot and dry, but the weather was mercifully cool and cloudy. On our way up to the falls, we posed in front of the Sphinx, which was snowier than we've ever seen it: 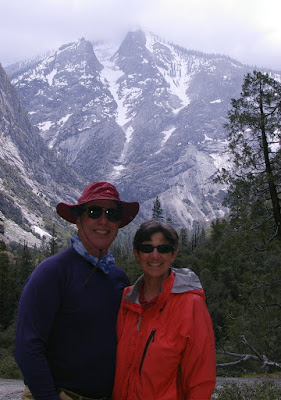 The high country had just received a dusting of snow: 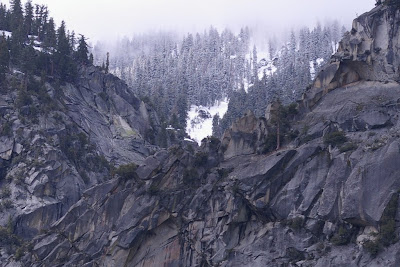 The falls themselves were booming and roaring -- the ground was shaking under our feet: 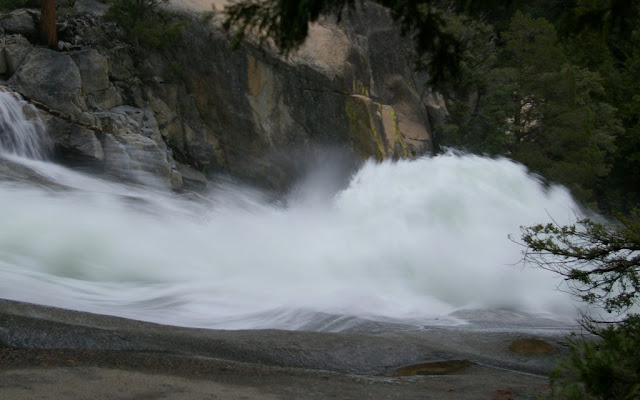 The mist rose high into the air: 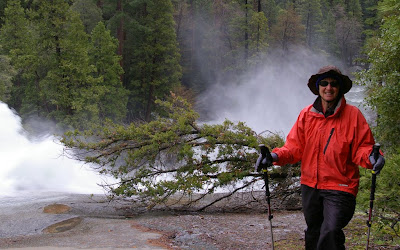 In this short video, I panned along the course of the upper cascade of the falls -- there was so much mist on the lower falls that we could not even expose the camera to the moisture:

As we sat by the falls, it started to snow -- big, wet flakes. We had never seen snow falling on a waterfall. It was magical. (Fortunately, we were properly dressed and were able to hang out near the falls, just watching the snow.) This clip shows the snow falling into the cascade:

On our hike back down the hill, the snow got heavier -- this short clip shows the snow falling against the backdrop of the dark conifers and the newly-leafed deciduous trees:

The storm had passed; it was a cool, clear, breezy day. During many of our past trips to Kings Canyon, we had dreamed about riding our bikes from Boyden Cavern (at the bottom of the canyon) all the way to Cedar Grove, because the road runs right along the river. However, most of the year, there is too much traffic and it's too hot; we had fantasized about a cool day during the off-season, with little traffic.

That day finally arrived. The ride was a delight. The road was actually steeper than it looked, rising about 200 feet or more per mile, but we didn't mind. In a car, you can't see the full extent of the craggy cliffs rising above the river. The little orange dot on the bridge is me, in my stylish safety vest: 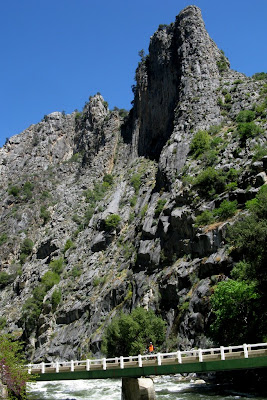 The river was thundering right next to us. Along the banks, there were quite a few red or pink bushes in bloom -- we weren't sure what they were: 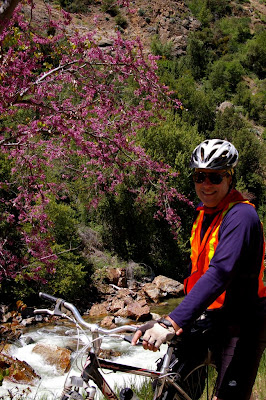 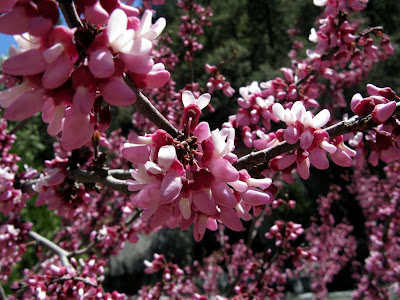 We stopped off at every waterfall along the way, including Grizzly Falls: 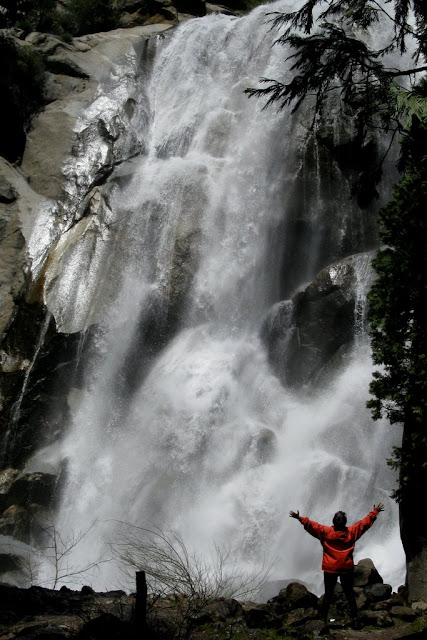 The best part, of course, was the ride back down the hill, often at 20 miles an hour or better (which is pretty fast on a mountain bike). Later that afternoon, we changed into hiking gear and stopped off at Roaring River Falls: 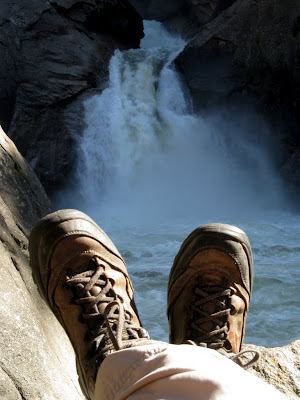 In the late afternoon, we hiked through Zumwalt Meadows. We spotted a cinnamon-colored bear wandering around, foraging in the meadow: 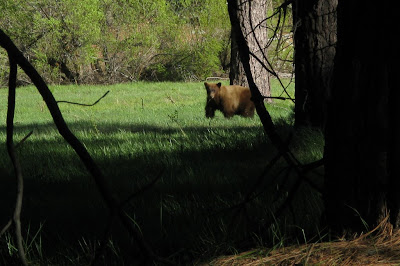 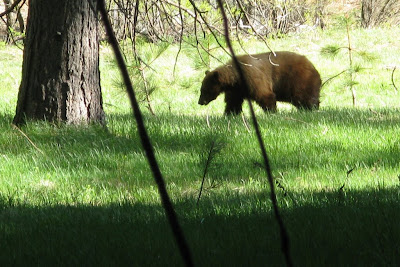 Through the magic of zoom, this video clip makes it look as though we were right next to him -- we weren't:

He walked through the meadow, toward the river, and we backed away. We lost him in the woods -- where did he go? It turns out that he swam across the river! We saw him clamber out; he shook himself like a wet dog: 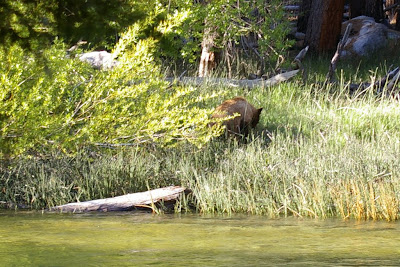 And then he looked back at us: 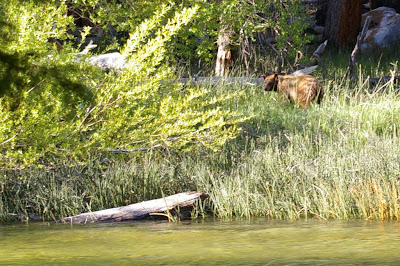 Late that evening, back our campsite, I took a time exposure of the river:

The spring flood had left reflective pools on the banks of the river: 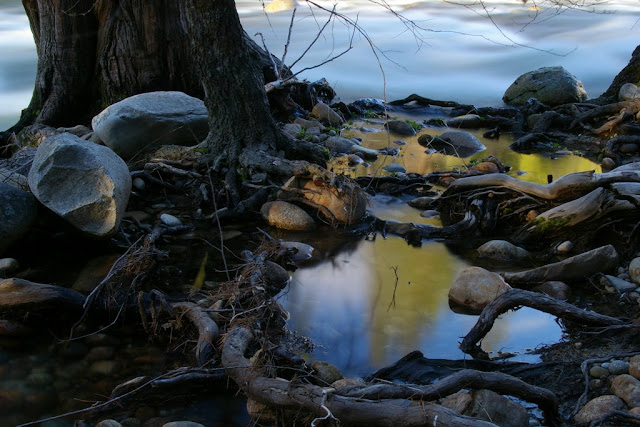 On the recommendation of a ranger, we tried the Deer Cove trail, which turned out to be hot, dusty, steep, long, high, and difficult. The trail was poorly maintained, with several blown-down trees blocking the pathway; we had to climb around and through them. Also, much of the forest had been destroyed in a fire. The undergrowth was growing back, but the trail was still very open and exposed most of the way. The hike was about 10 miles long (round-trip) with an elevation gain of over 3000 feet. As we got to the top (near Wildman Meadow), the trail was blocked with snow.

Although this hike was very strenuous, and not a wonderful experience, the views of the Great Western Divide from the top were terrific: 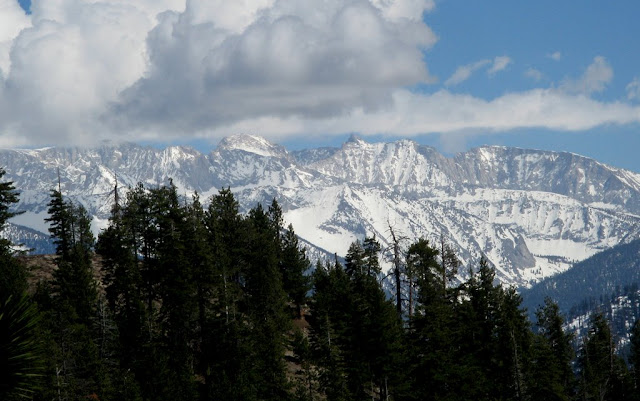 From the lower part of the trail, in the late afternoon, we had a great view eastward toward the high country of Kings Canyon. Don't be fooled by the wildflowers -- these were virtually the only ones that we saw on this hike: 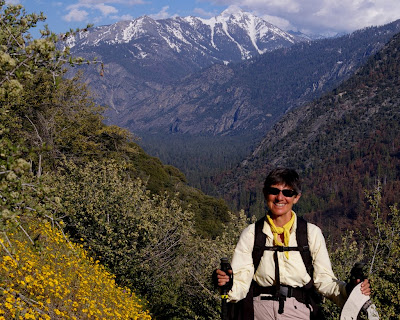 Note that in the preceding picture, the upper portion of the canyon (at left) is U-shaped, while the lower portion (center) is V-shaped. I think that the transition from "U" to "V" may mark the lower edge of the glaciation.

In the morning, we rode our bikes from Cedar Grove to the end of the road, stopping off again at Roaring River Falls: 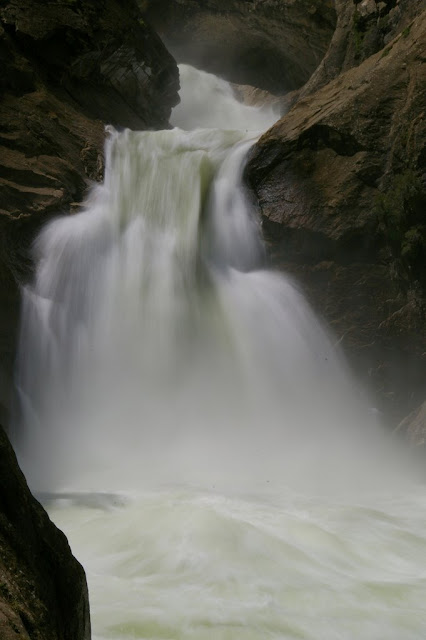 It was a sparkling morning, with fresh snow on the surrounding peaks -- the highway was completely empty: 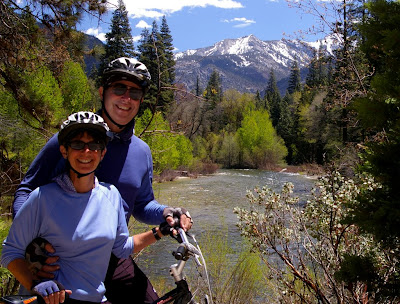 On the way back to Cedar Grove, we took the River Road, a sandy and bumpy dirt road that winds pleasantly through the woods on the north side of the river. We almost ran over this rattlesnake: 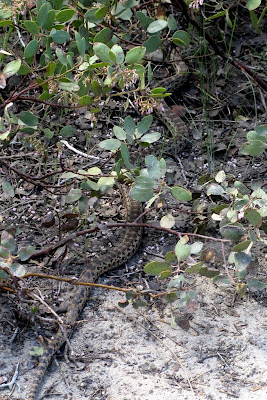 Based on this trip, we are not sure whether we will spend more than a few days at a time, down in Kings Canyon itself. The day hiking is fairly limited, since the walls of the canyon are so vertical (and the base elevation is so low). In the off-season, the weather is delightful. In the summer, it can get very hot.

In any event, we then shifted campgrounds and drove west toward the Grant Grove area. We stayed in the northernmost loop of Azalea Campground -- it was almost deserted. That night, we walked through the grove in the moonlight. (These exposures took about two minutes; they might be worth clicking or even double-clicking. Be sure to hit "back" to get back to the blog.) This is the General Grant Tree, with the Big Dipper upside down on top of it: 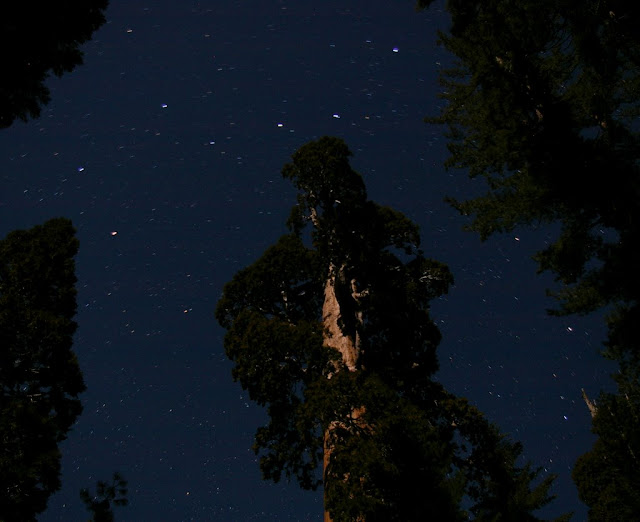 This is the same shot, edited in Lightroom: 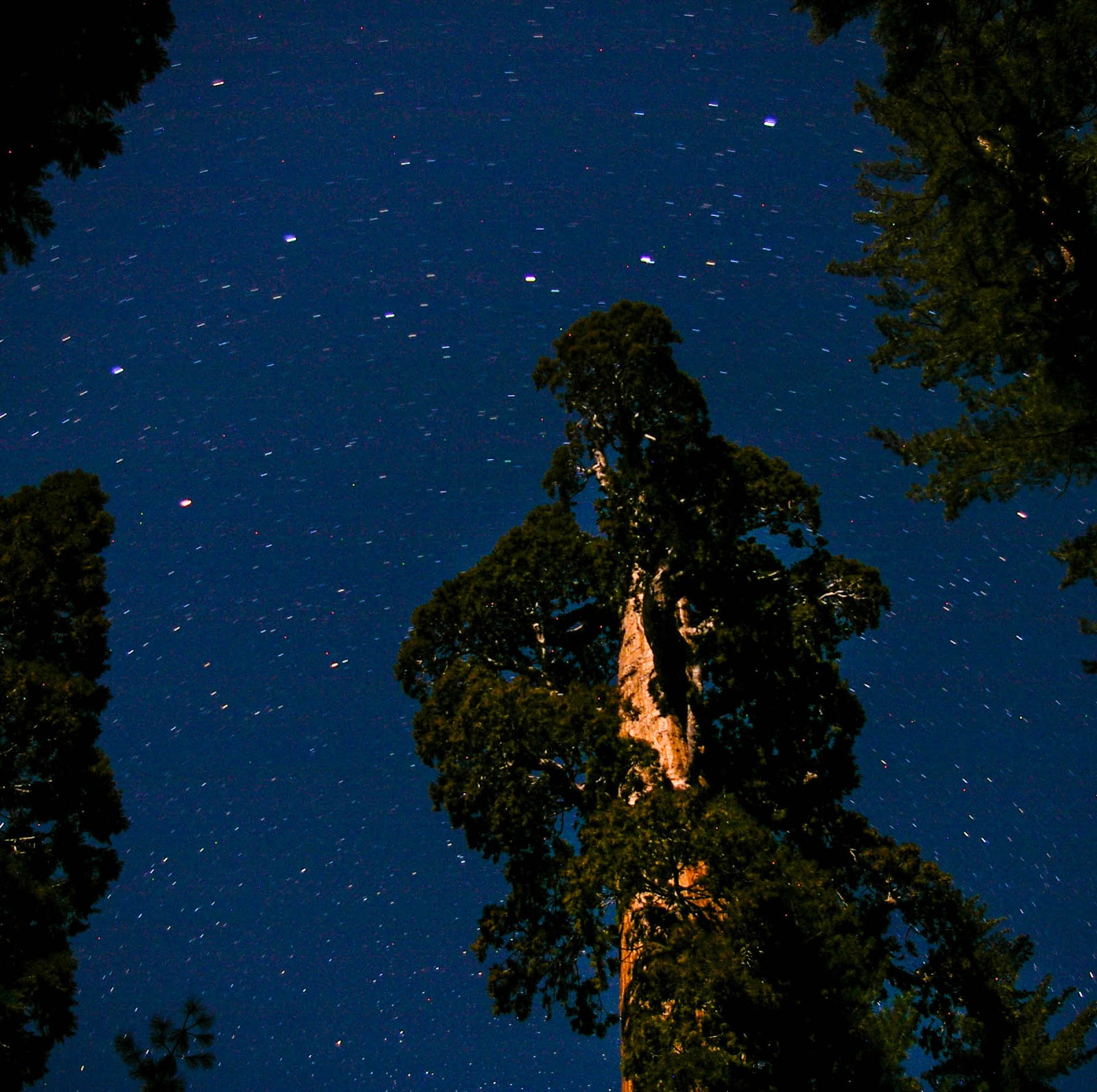 Here are two other trees in the Grove -- I'm sure that they have names, but it was too dark to read the little signs! 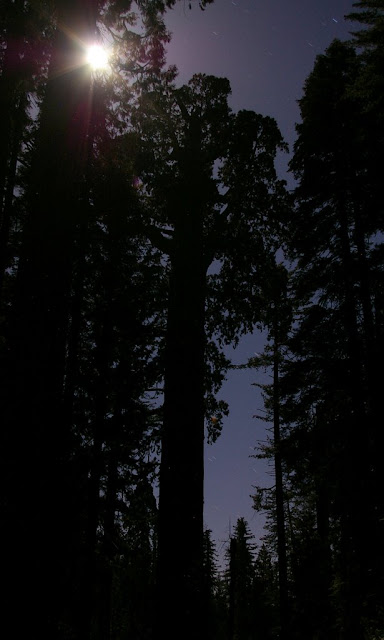 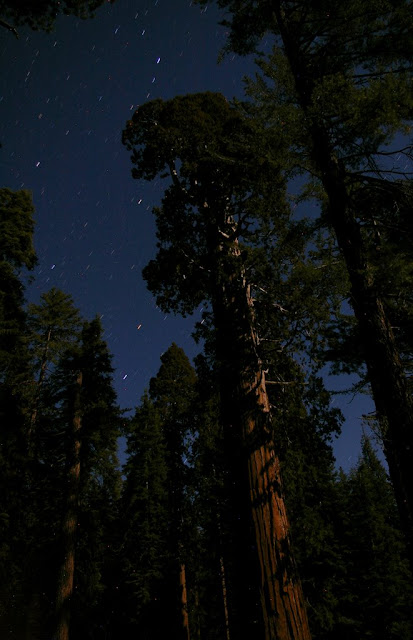 We hiked down into Redwood Canyon from Quail Flat. Although the highway was open, the dirt road down to the canyon was closed by snow drifts. So we just clambered over the snow and walked down the road, into the canyon. There was a surprising amount of snow down in the canyon. Since the trails had not yet been cleared, the footing was a little tricky. But it was delightful to be in the canyon under cool and moist conditions, as contrasted with the usual summertime heat.

We took our usual compulsory photos of Felice standing next to a Sequoia. The second picture is a detail cropped from the first: 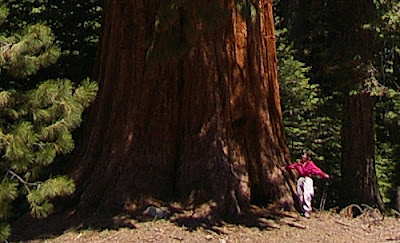 In addition to those still photos of the trees, we've added a new twist -- a video clip panning up from the base of the tree to the tip, providing a different perspective on the immensity of the tree:

And we finish with Felice's obligatory "boots on the scene" shot, resting comfortably on the soft spongy bark of a Sequoia: 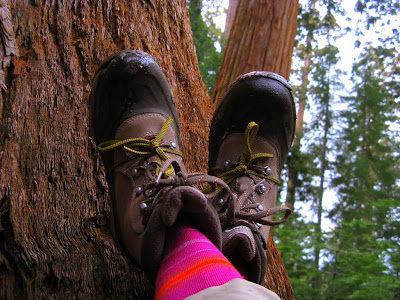