(You can click on the photos to see a slideshow, and then hit "escape" to get back to the text.  Also, a note on the photo credits: as always, both Felice and I took these shots, and many of my shots resulted from her suggestions.  I do the photo editing using Lightroom.)

The annual Perseid meteor shower looked like a good bet this year – no moon and no thunderstorms!  So we headed up to the Eastern Sierra for some high-altitude stargazing.

Saturday, August 8:  We left home shortly after 10 AM, planning to stop in Lee Vining for the night.  But we made good time (no headwind!) and managed to find a boondocking site in the Toiyabe National Forest at 9300 feet, up on a ridge for maximum sky-viewing.  It stopped raining just before we arrived, at around 6 PM.  After the sun dropped behind the mountains, we were treated to a fine display of "crespuscular rays:" 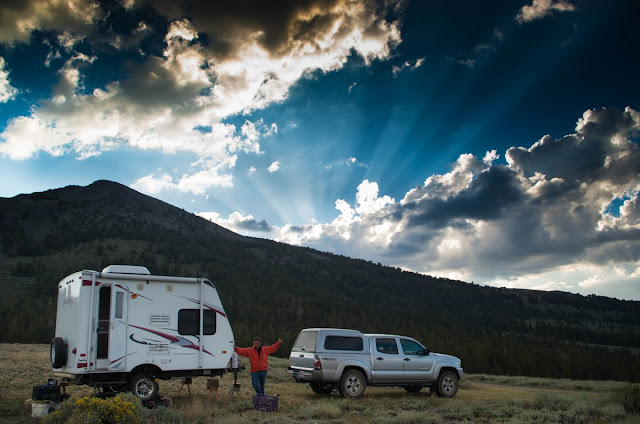 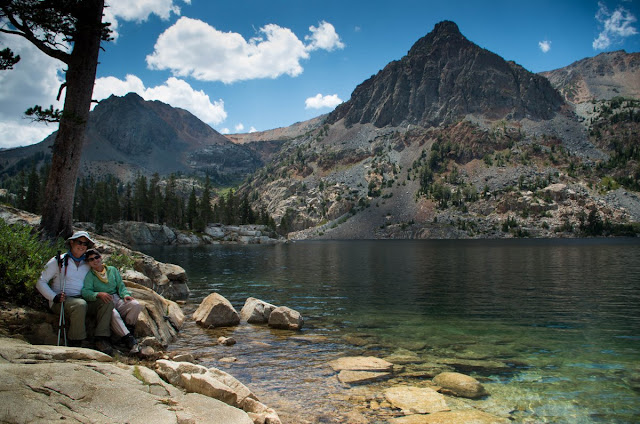 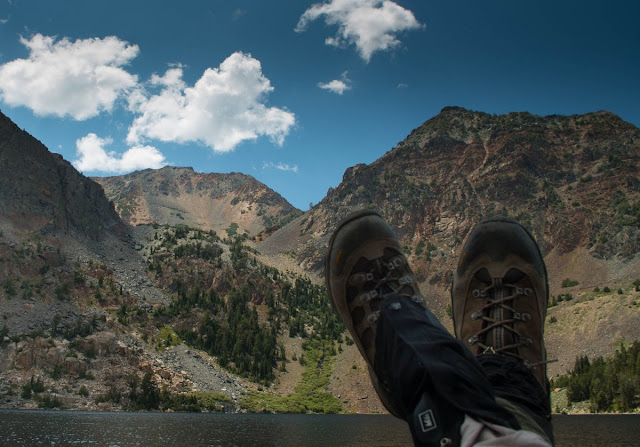 Monday, August 10:  We hiked to Gibbs Lake, just south of Tioga Pass.  The hike was hot and dusty; although the trail was near the creek, most of it was not next to the creek, which was a disappointment.  This was a hike of about 6 miles round-trip, with over 1600 feet of elevation gain (steep!).  And when we got there, the lake itself was nothing very special.  One of the guidebooks described this as one of the "greatest day hikes" in the Sierra.  Wrong.  We didn't even take one picture.  On the plus side, we had the entire trail all to ourselves, not surprisingly.

Late that afternoon, back at the trailer, the wind really started to roar, gusting to 50 miles an hour (according to NOAA).  In this one-second time exposure, note the blurry wind-whipped sagebrush in the foreground: 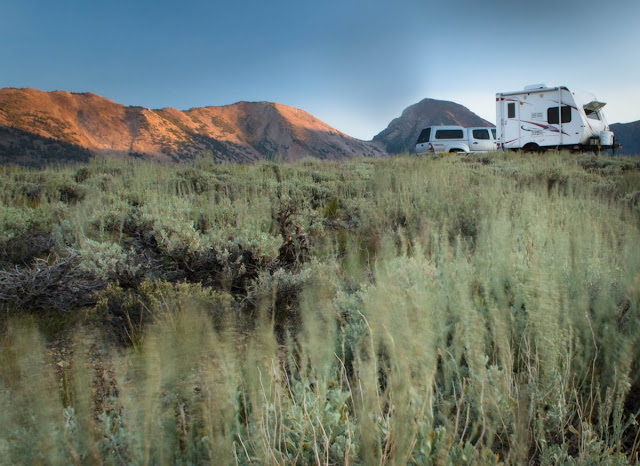 In this shot, notice the white smoke in the sky above the ridgeline, blown in from the forest fires on the west side of the Sierra: 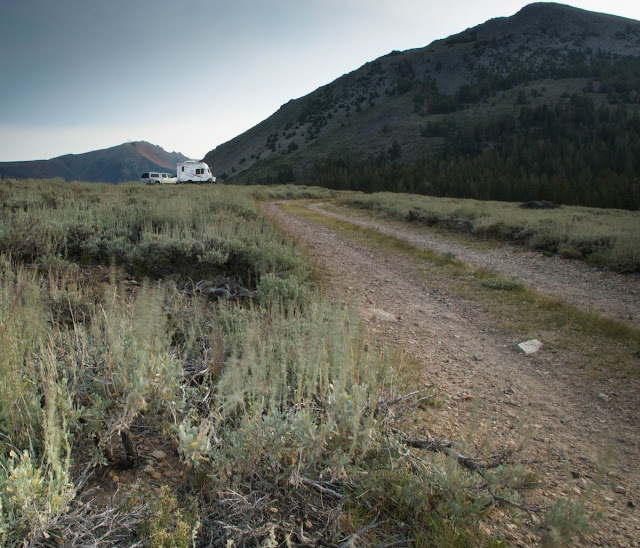 That night, the Milky Way was really bright – this is a 25 second exposure at an ISO of 3200.  It wasn't until we got home and looked at the pictures that we discovered that we had accidentally captured a faraway meteor on the southern horizon, just above the hills in the left-center portion of this shot: 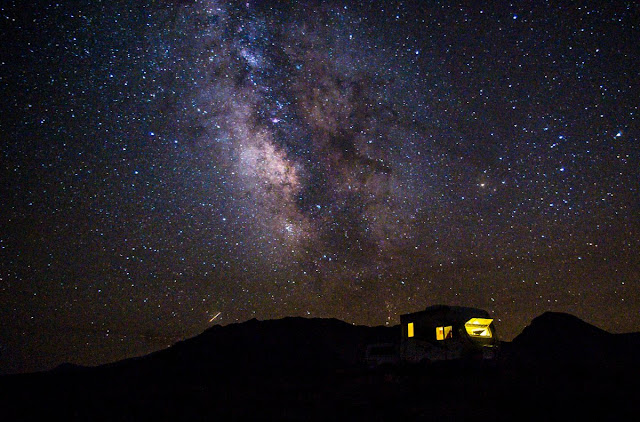 Tuesday, August 11:  That morning, the entire Eastern Sierra was very smoky, due to forest fires southwest of us -- we could not even see Mono Lake in the valley below us.  In an effort to beat the smoke and the heat, we headed up to Tioga Pass to the Spillway Lake trail.  The trailhead was at about 9800 feet, and it was delightfully cool and breezy.  The meadows were still green, and there was plenty of water in the creek: 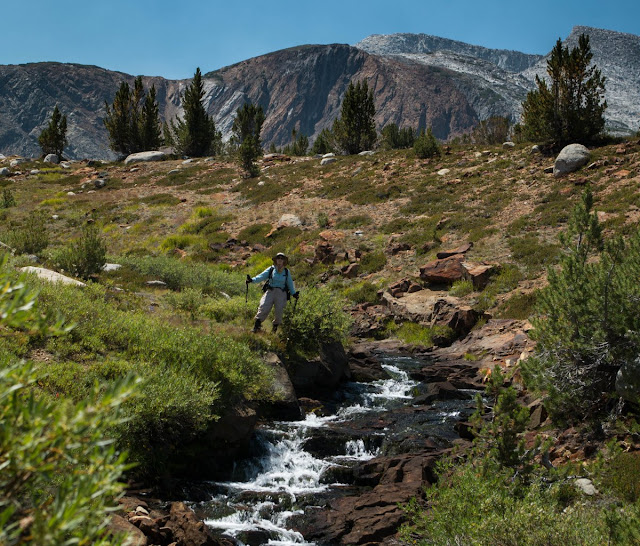 Above Spillway Lake, we bushwhacked up to Helen Lake at 11,000 feet; the terrain was fairly open, so we picked our own trail up the steep hillside, zigzagging carefully through the broken talus.  We have discovered that there are many High Sierra lakes called Helen, Dorothy, or Mary – very popular people!  A little research later revealed that this particular lake is named after John Muir’s daughter.

The lake itself was stark, surrounded by granite cliffs.  As I got ready to take our usual "two-shot," my precious Pentax digital camera suddenly stopped working – it made an agonizing grinding noise, and the shutter would not open.  I was terribly disappointed – I had made elaborate plans to capture the meteor shower with this camera's special features, and now that was impossible.  But there will be other meteor showers!  So we switched to Felice’s "point-and-shoot" camera as our backup.  (I have just acquired a used Canon T3i -- we will see if it is as good as my old Pentax.)

At the outlet to Helen Lake, I hopped onto an “erratic,” a gray granite rock that had been deposited onto a base of orange volcanic rock by a long-gone glacier.  Spillway Lake is on the left, and Mt. Conness is in the distance on the left: 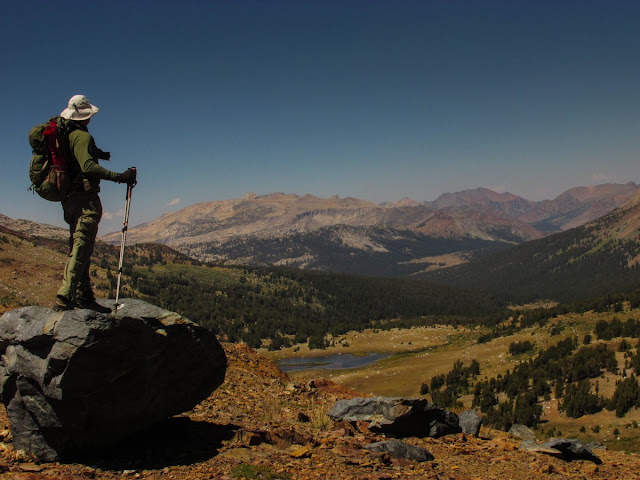 On our way back down to the trailhead, we stopped for some excellent "wading” in the creek -- here is the obligatory “neoprene bootie” shot: 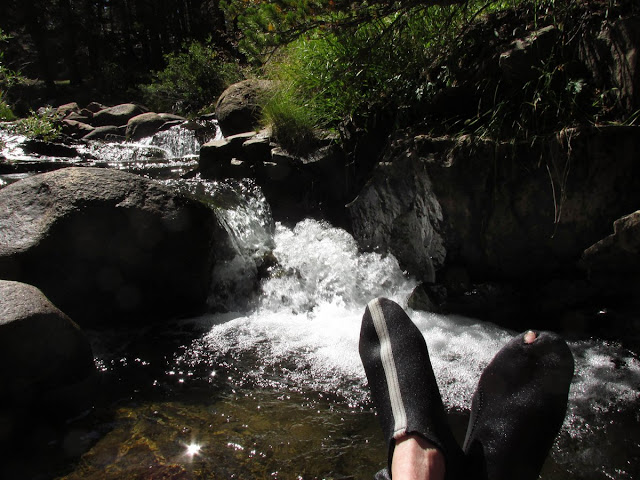 (We often bring the booties in case we need to "wade."  They protect our feet from the sharp rocks in the stream, and they are easy to carry.)

Overall, this hike was slightly in excess of 10 miles round-trip, with an elevation gain of about 1600 feet.

Wednesday, August 12:   We hiked up the Virginia Lakes valley; the trailhead was at around 9700 feet, so we were largely above the heat.  When we got to a nameless small lake at around 10,700 feet, we treated to a rare daylight serenade by a small pack of coyotes across the lake.  Felice had the presence of mind to grab her camera and record their eerie howls.  The wind was blowing hard, so the sound is a little obscured -- but crank up the volume:


Up at the summit, at over 11,000 feet, we perched on some uptilted orange slate – the backcountry of Northern Yosemite is behind us: 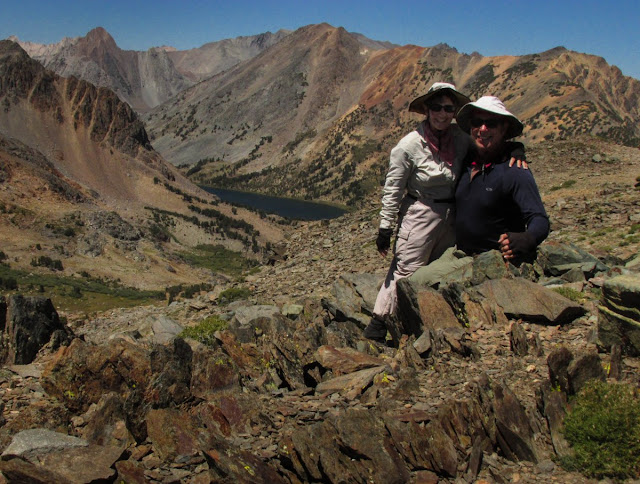 We then bushwhacked toward the south, where a ridge at 11,300 feet overlooked Burro Lake in the Lundy Canyon area.  This breezy panorama covers everything from Mt. Dana and Mt. Gibbs in the south, all the way around to Mt. Patterson on the north:


Even in this harsh alpine environment, and even in a drought year, there were still some hardy groundflowers making the best of it: 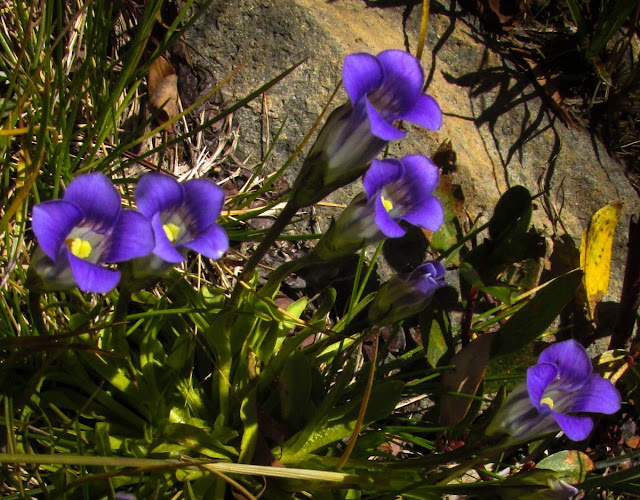 On our way back down, we stopped to pay homage to craggy Black Mountain: 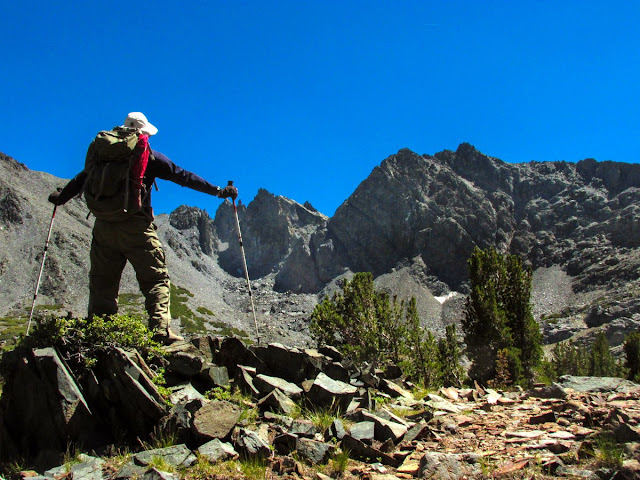 Late that afternoon, back at the trailer, the wind was howling once again.  We set out our lounge chairs in anticipation of the meteor shower; but the wind was blowing so hard that we had to anchor the chairs with lots of big rocks.  In this shot, note that I am holding a rock, instead of our usual red cocktail cups: 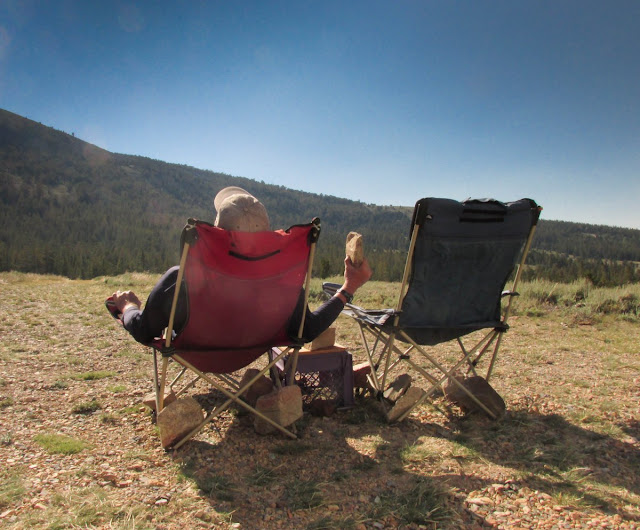 That evening, just after sunset, I stepped out of the trailer, hoping to spot some of the colorful early-evening "earth-grazer” meteors.  But the sky was almost completely obscured by smoke from the forest fires – there was no point in sitting outside.

However, we knew that the peak of the meteor shower would be at 1 AM.  We set an alarm; but as it turned out, I was awake anyway at that time.   I again checked the sky, and this time it was reasonably clear.  We got dressed in our heavy clothing (since the temperature was below 50, and the wind was still blowing at about 20 miles an hour).  We sat out in our lounge chairs for about an hour, under a heavy sleeping bag, and saw about 20 meteors, several of which were fairly good (colorful with long-lasting smoke trails).  So the meteor shower was not a complete bust, after all.

Thursday, August 13:  We drove home in about 9 hours; the worst part was the typical LA weeknight traffic.  But it was hot, so we were happy to be sitting in the air conditioned truck.