We love rainbows.  (Who doesn't?)  So we try to capture them, whenever we can.  These are some of our better rainbow shots.  Almost all of these are time exposures, which means that the camera sees much more color than we can.

September 2007:  This was taken in the high country of Yosemite, near Tuolumne Meadows.  This is "cloud iridescence," which is caused by the refraction of sunlight by ice crystals.  The sky looks black because I had to "stop down" the lens with a very tight f-stop, since I was shooting almost directly into the sun: 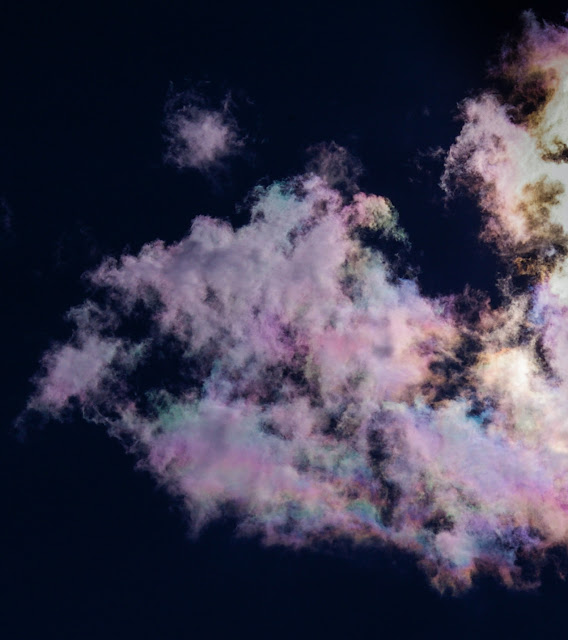 October 2008:  This is Berry Falls in Big Basin State Park, near Santa Cruz.  Just by luck, the rainbow was hanging in a patch of sun in front of a deeply shadowed rock wall: 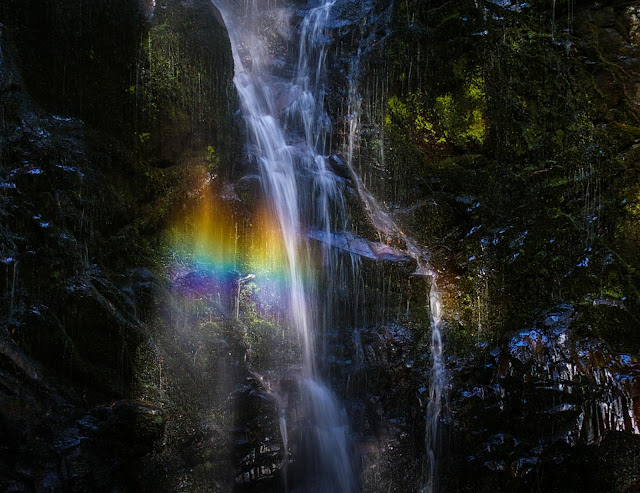 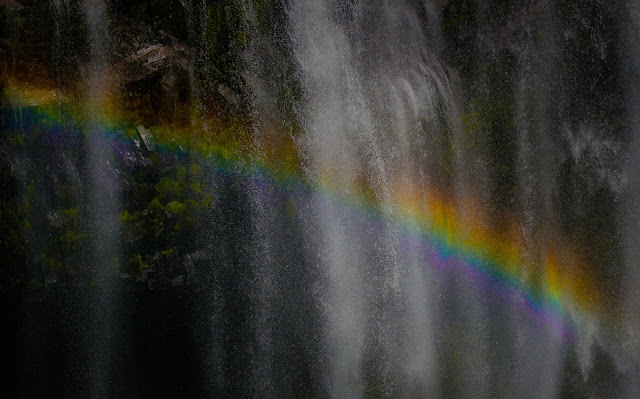 October 14, 2010:  This was taken in the mist next to Yellowstone Falls.  You can actually see the yellow color of the stone that gave the river (and the falls and the park) their name: 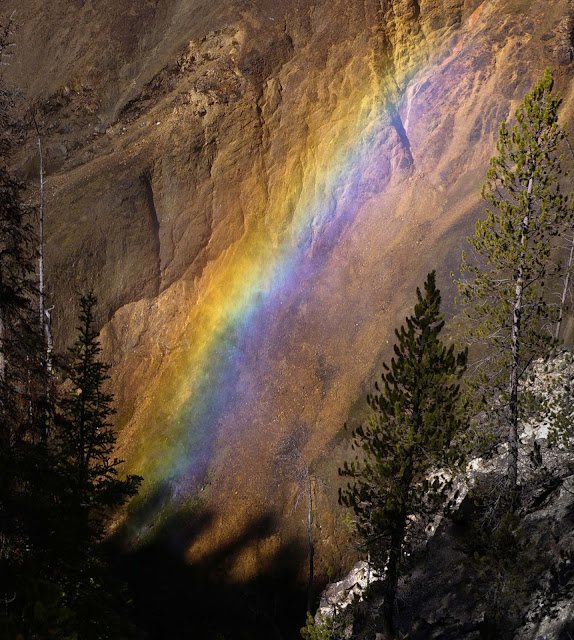 March 9, 2012:  This is a "moonbow."  The full moon was shining on Yosemite Falls.  We could see the moonbow with our own eyes, but the colors were very faint.  Notice the stars in the patch of sky at the top center of the shot: 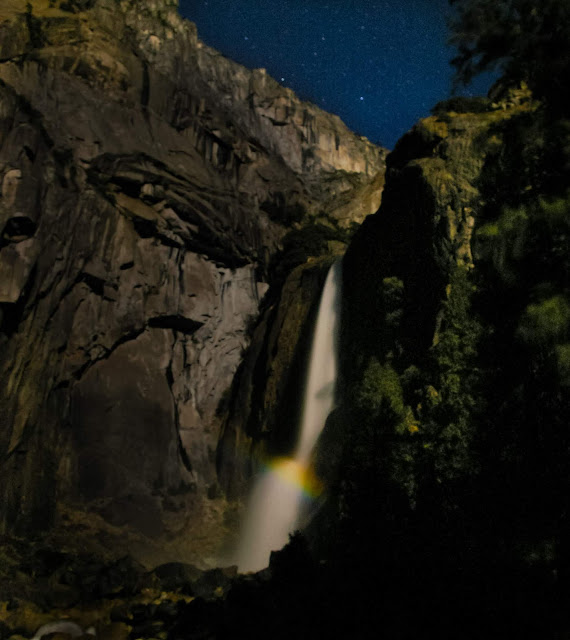 September 22, 2012:  Takakkaw Falls, Yoho National Park, British Columbia.  "Takakkaw" means "wonderful" in Cree.  This shot does not show the full extent of the falls (more than a thousand feet high!) because I wanted to zoom in on the rainbow: 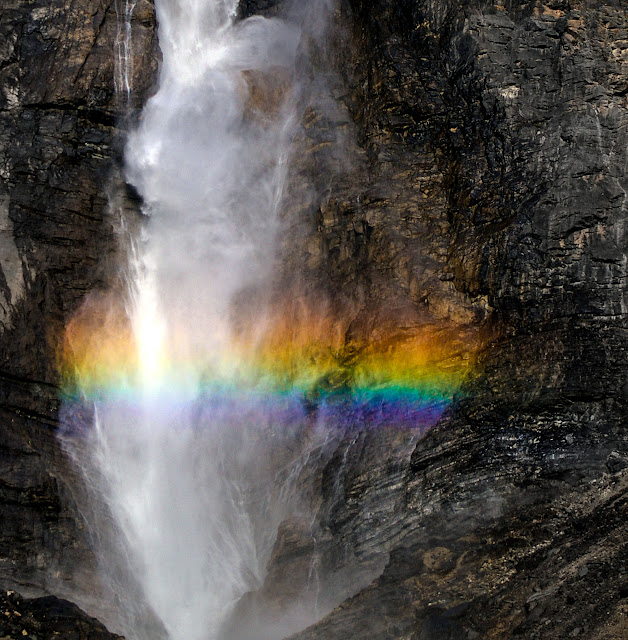 December 12, 2012:  Death Valley.  This is another iridescent ice cloud.  Once again the sky is black because I was shooting into the sun: 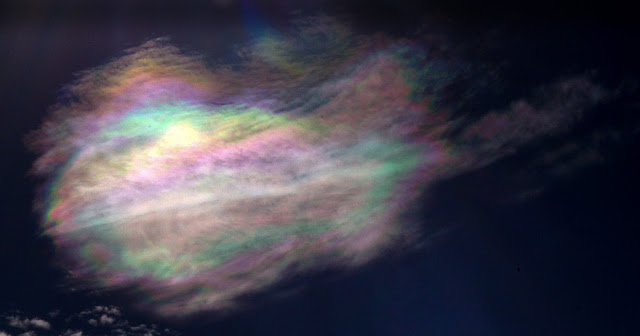 May 14, 2013:  We were boondocking in the Sequoia National Forest.  Our campsite overlooked Kings Canyon.  Just after a violent thunderstorm passed over us (conveniently during cocktail hour in a warm and dry trailer), the sun came out.  We stood on the edge of a cliff near the trailer, looking down at the end of the rainbow: 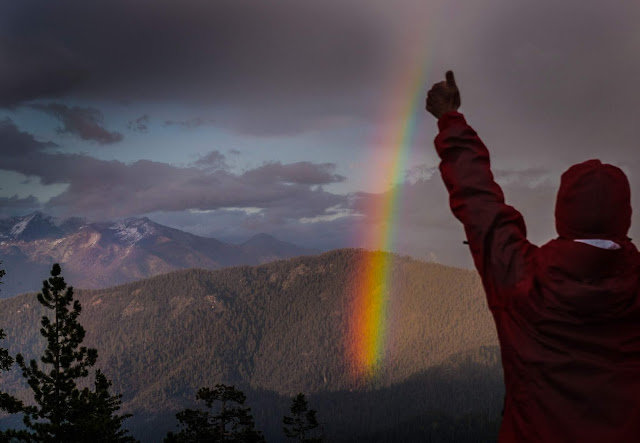 March 9, 2015:  This shot of Yosemite Falls looks as though it has been Photoshopped to add in the rainbow, but it's real.  Remember that in a time exposure, the colors have extra time to accumulate on the camera's sensor: 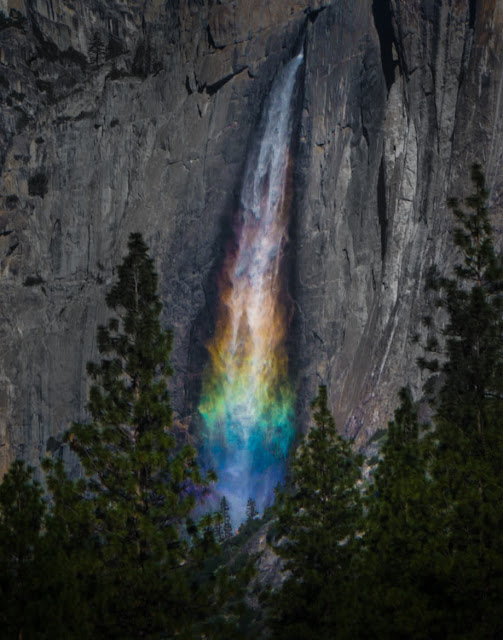 March 10, 2015:  This is Vernal Falls in Yosemite; we were on the aptly-named Mist Trail.  Often, there is so much mist on this trail that photography is difficult or impossible, but we got lucky -- the wind was blowing the mist away from us.  To get a sense of scale, Vernal is over 300 feet high. Note the small "double rainbow" or supernumerary in the lower left corner --  the usual color sequence is inverted because the light is being refracted twice: 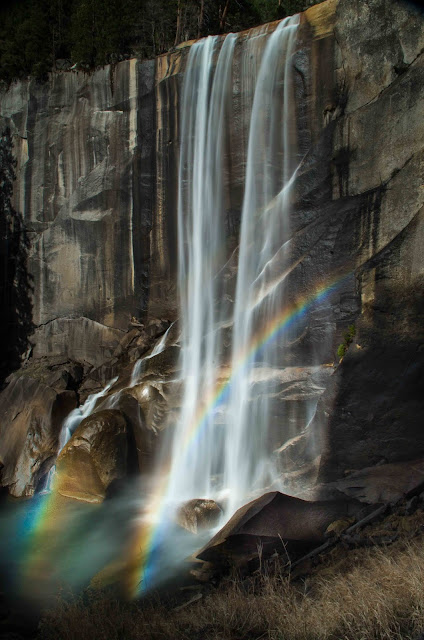 This shot was taken a few minutes later -- I zoomed in on the boulder at the bottom of the falls.  I ordinarily would not include two shots of the same thing, but this detail shot shows how the craggy basalt has been rounded and sculpted by the water: 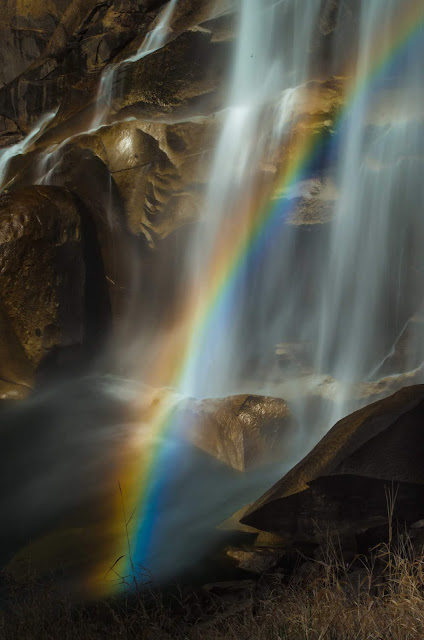 September 23, 2015:  This was taken along the Grottos Trail near Aspen, Colorado.  This rainbow was only about a foot long, but I liked the way the spray of water caught the light just above a shadowy overhang: 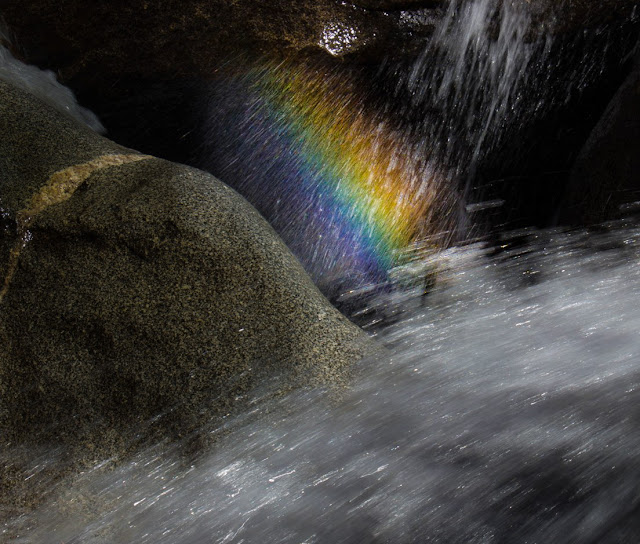 November 11, 2015:  This was taken on the Little Baldy trail in Sequoia National Park, the day after a snowstorm.  The cold night-time temperatures had created hoarfrost crystals on the fresh snow, and the crystals refracted the sunlight.  We have never before or since seen this "rainbow sparkle" phenomenon: 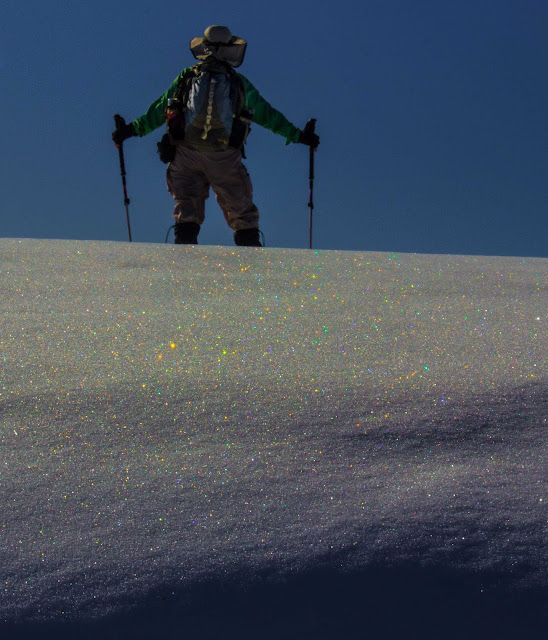 December 17, 2015:  This was taken on the trail to Upper Yosemite Falls, at a point where the trail zigs closer to the falls.  It had snowed a couple of days before, and the weather was very cold.  During the night, the spray from the falls had frozen onto the rocks and would periodically crack away from the wall and plunge down into the canyon.  It sounded exactly like thunder from a nearby lightning strike:  Crack! Boom!

We got lucky with this picture -- the shadow of the nearby overhanging cliff had already fallen on the rock behind the rainbow, but it had not yet reached the falls themselves, so that the contrast between the bright rainbow and the dark rock was really sharp: 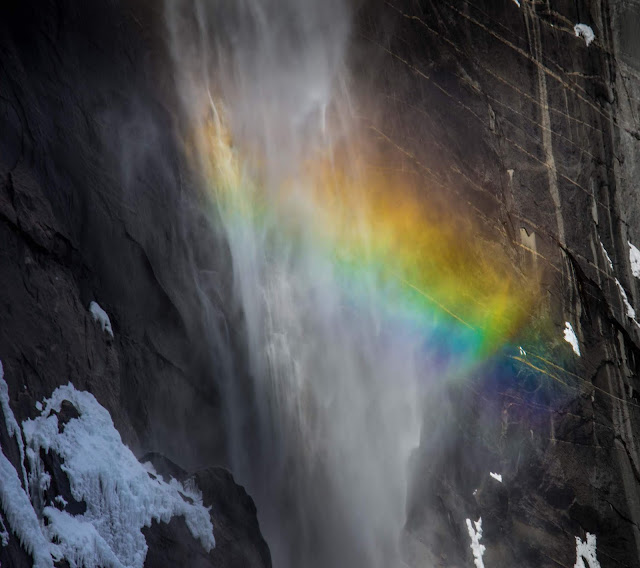 September 22, 2016:  We had just arrived at Great Basin National Park after a day of driving through northeastern Nevada in the rain.  The sun came out, giving us a big desert rainbow: 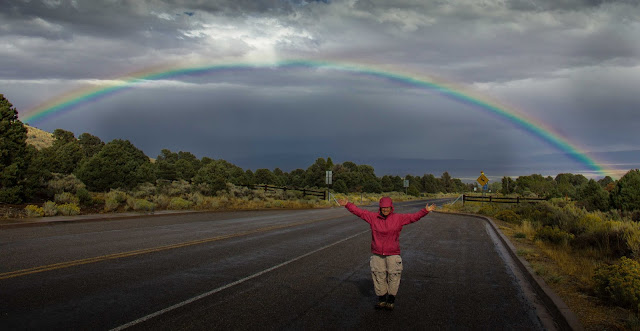 April 27, 2017:  This is another iridescent cloud, taken from Minaret Vista near Mammoth: 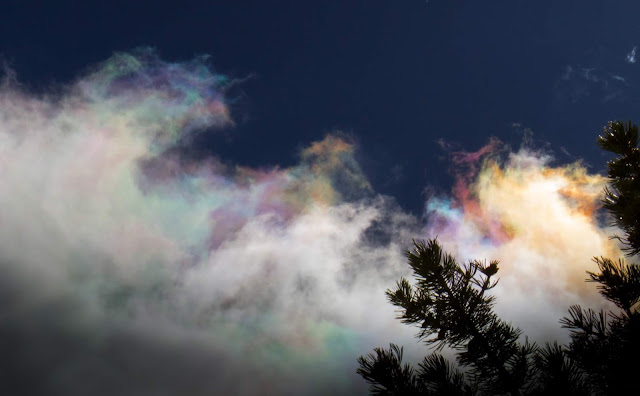