We wanted to do some hiking in the Yosemite high country, near Tioga Pass, to escape the heat.  On a whim, we checked the reservation system for Tuolumne Meadows Campground, and found a last-minute opening.  On Saturday July 6, we drove to Lee Vining and stayed in the RV park at the foot of Tioga Pass.

Sunday, July 7:   We headed uphill to Tuolumne Meadows and got our campsite, which was very tight.  (We later learned that we had selected a “tent only” site for our trailer, which the Ranger didn’t tell us.  But we managed to squeeze in, anyway.)  The campground was pleasant – lots of shade and fairly cool.  As one might expect, the campground was full.  Even so, it was not too noisy, except for the occasional generator here and there.  Of course, we prefer the silence and privacy of boondocking, but the nearest boondocking is about an hour away; in prior years, we had discovered that the “commute” between our campsite and the Tioga Pass trailheads was too time-consuming, often taking an hour each way.

After getting settled in our campsite, we took a pleasant hike upstream along the Lyell Fork of the Tuolumne River.  Although many of the wildflowers appeared past their prime, the lupines were still going strong: 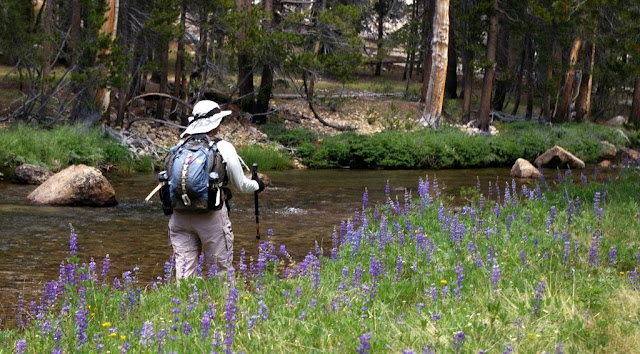 We were surprised that there was still so much water in the river, since the snowpack had been so light last winter: 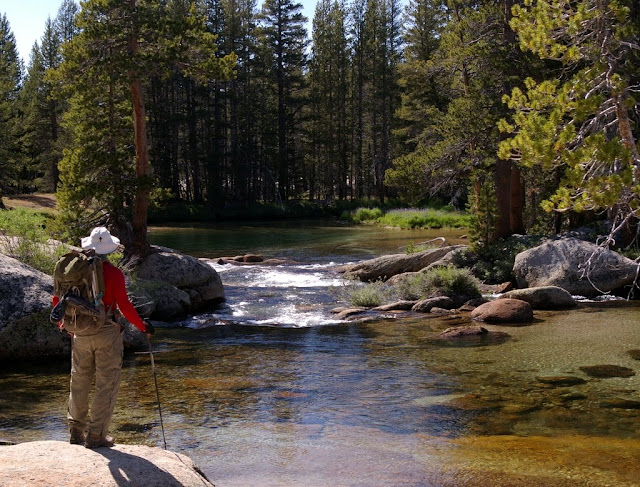 Late that evening, we took a short walk.  To the south, the Milky Way over the Tuolumne River was very bright: 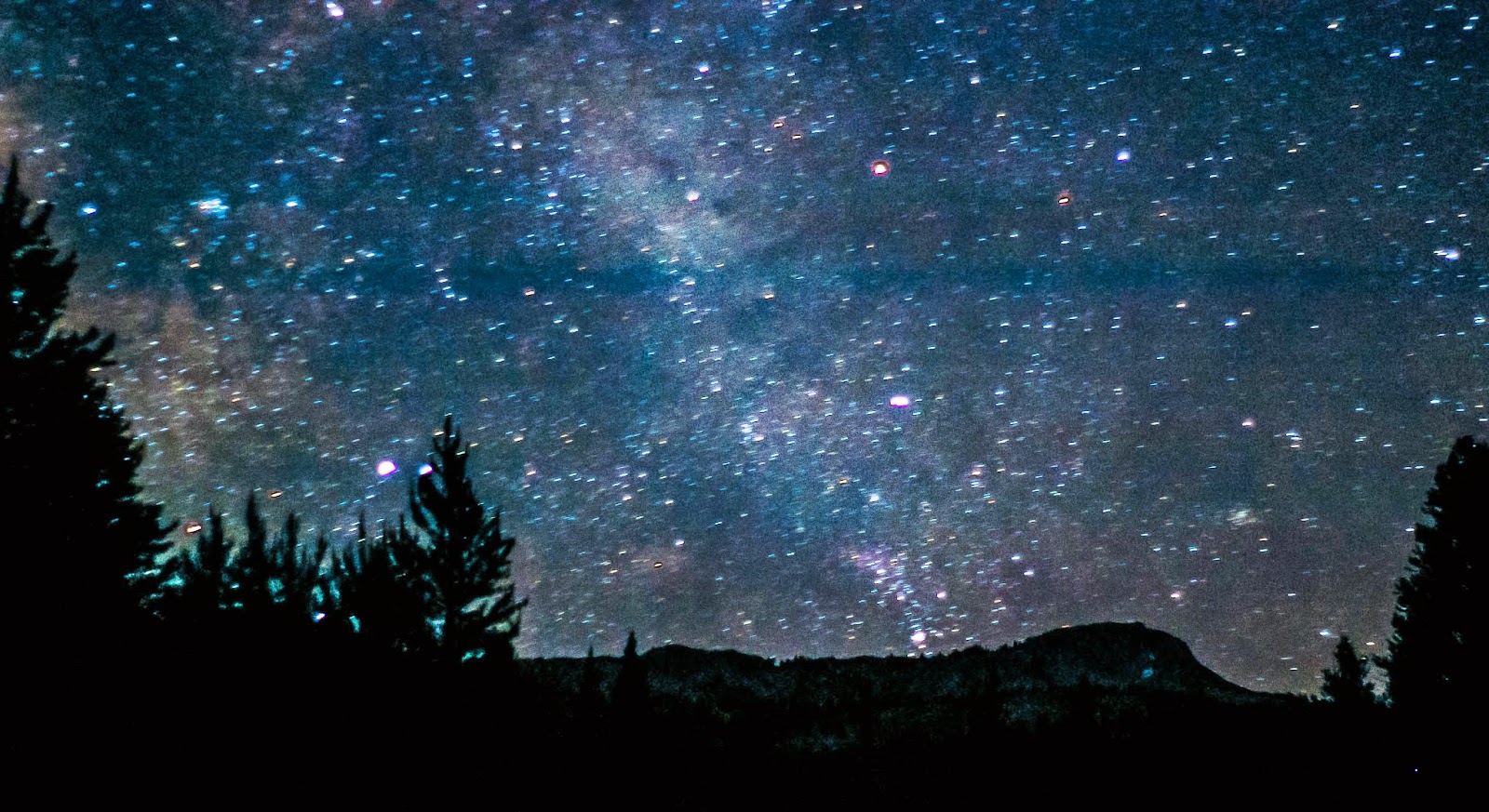 Lembert Dome was silhouetted by the glittering northeastern stars: 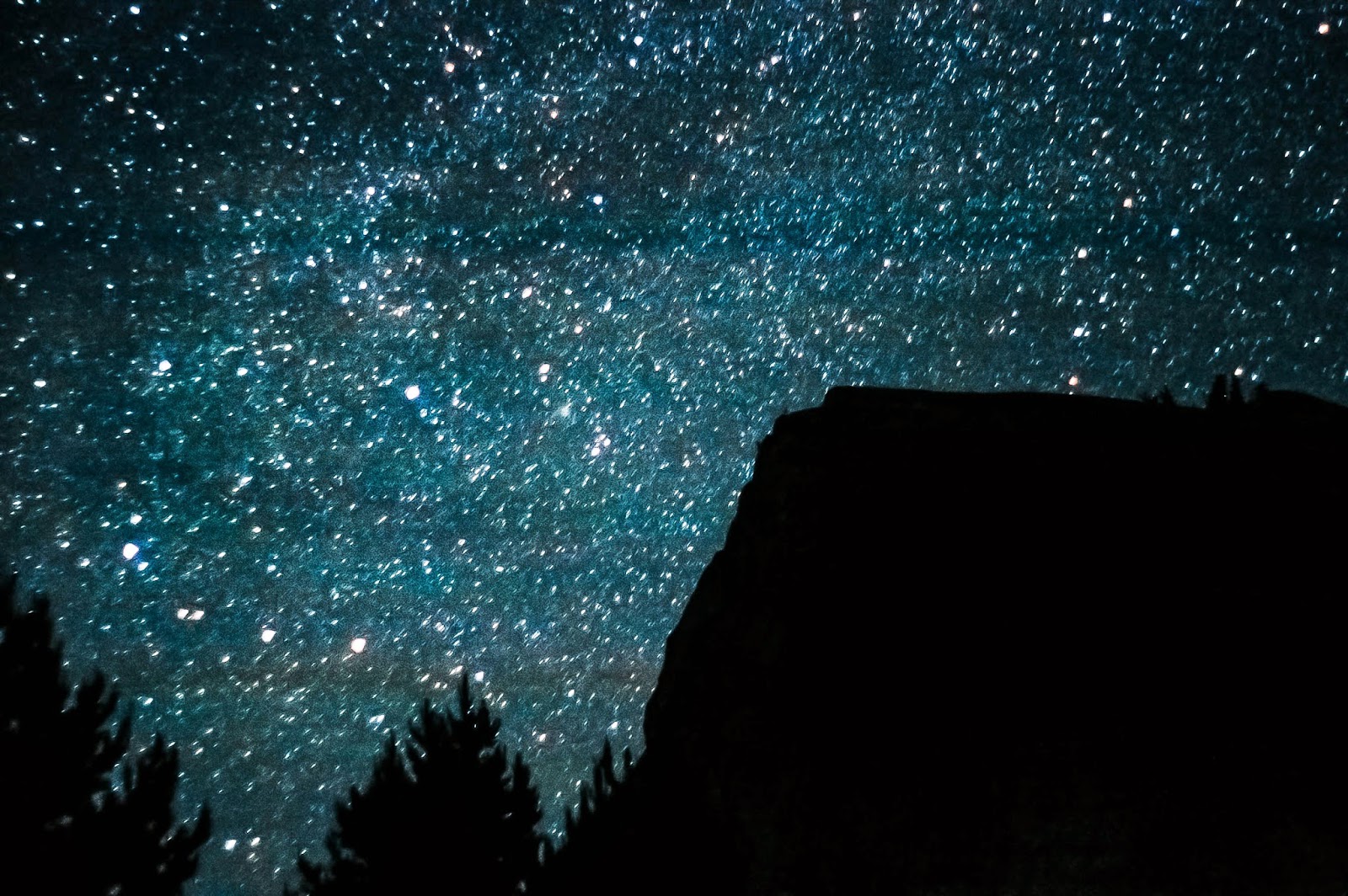 As we walked back toward the campground, a rather large bear walked out of the darkness and calmly crossed the trail right in front of us.  (It wouldn’t hold still for a photo, and I thought it might be a bad idea to use the flash.)  The next morning, we reported the bear to a ranger. She told us that this particular bear was a permanent resident in the campground area.  The bear (a female) is 33 years old, the second oldest bear in the entire country.  (Who knew that bears had birth certificates??)  This bear's teeth are worn to a nub, due to old age -- she survives by stealing easily-chewable "people food" from picnic tables.

Monday, July 8:  We hiked up Lembert Dome.  Thankfully, Felice had no problem with her acrophobia.  At almost 9500 feet, it was cool and breezy on top; the sky was so clear that it was almost indigo.  Cathedral Peak is on the left of this shot, and the Grand Canyon of the Tuolumne is on the right:

After descending Lembert Dome, we had lunch at Dog Lake and then hiked up toward Young Lakes.  The guidebook said that we would get to a great view, but we were unable to find it. However, we had a great time splashing around in Delaney Creek.

On our way back to the trailhead, we saw some climbers on the north face of Lembert Dome.  Felice looked up and said "thanks, anyway, but that's not for me:" 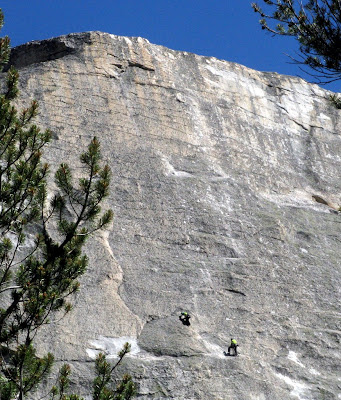 Tuesday, July 9:  We hiked to North Dome, which sits across from Half Dome in the upper Yosemite Valley.  The last time we took this hike, Felice had some difficulty with acrophobia, but not this time!  It was windy, cool, and clear on top of the dome: 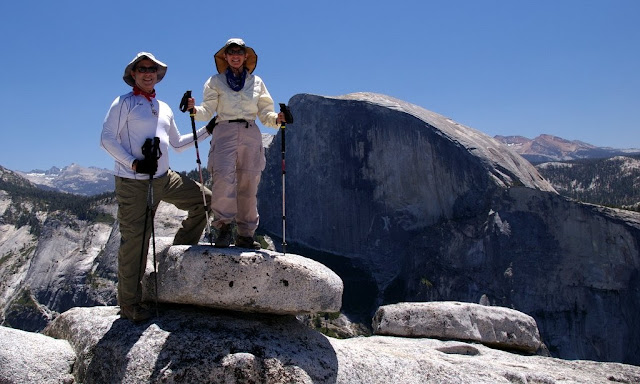 On the way back down, we got a great view of the arch at Indian Rocks, without having to hike all the way up to it.  This is the only granite arch in Yosemite: 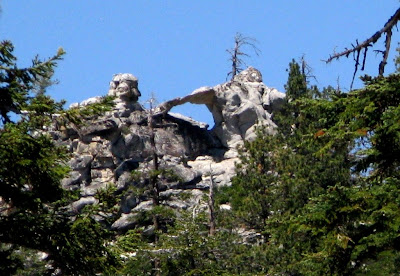 Wednesday, July 10:  This was a day of “bits and pieces,” rather than one long hike.  We started out at Olmsted Point, which (we thought) was just a parking lot just west of Tenaya Lake.  But we realized that there was a trail leading down from the parking area onto a ridge overlooking all of Tenaya Canyon.  The shot below is a view toward the northeast.  Polly Dome is on the left, Pywiak Dome is in the foreground on the right, and Medlicott Dome is behind it.  The high mountains in the center background are in the Mt. Conness/Saddlebag Lake area: 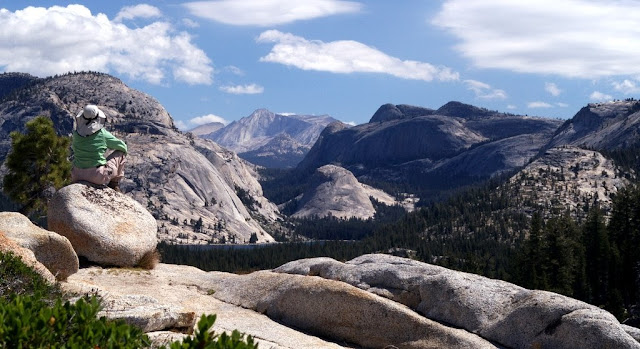 This view is toward the southwest, down Tenaya Canyon toward Yosemite Valley.  Cloud’s Rest is on the left, and Half Dome is above my head: 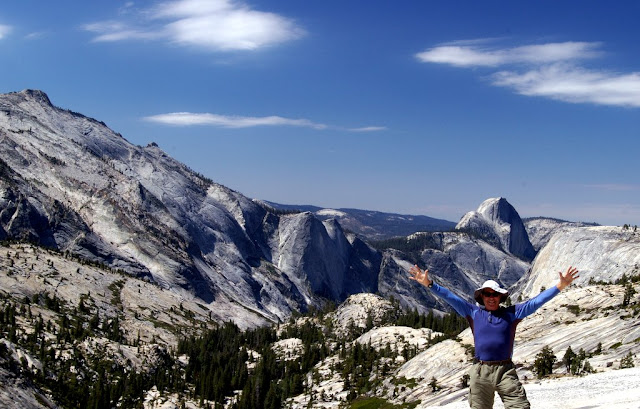 Later, we hiked up to May Lake and then had lunch on a ridge just to the east of the lake, with a sweeping view of the northeast quadrant of Yosemite.  In this shot, looking toward the east, Cathedral Peak is on the far right. Mount Dana is in the center right background.  The Tioga Crest is to the left of that, and on the far left is the Dunderberg Peak area:

In the late afternoon, we returned to the Lyell Canyon area on the Tuolumne River.  The red flowers are columbines: 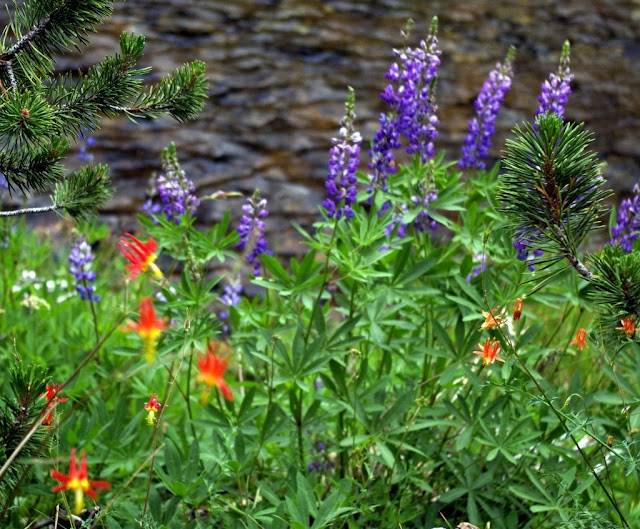 The lupine stood out against the reddish gravel in the streambed: 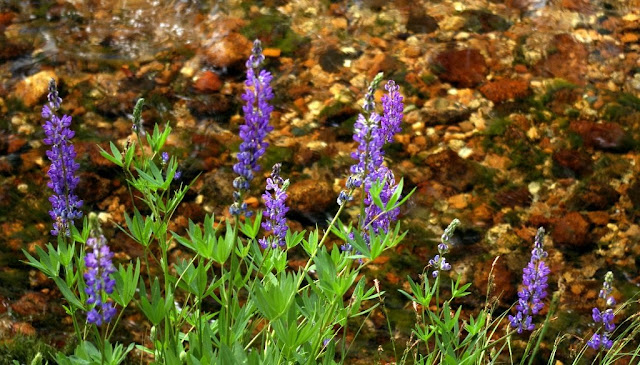 Thursday, July 11:  We hiked up to the Cathedral Pass area.  Unfortunately, horses and mules had trashed the trail, leaving a mess and also turning the soil into loose dust.  At one point, we passed a spring, where the water gushed directly up out of the rock – in this video, the flow of the water stirs the gravel in the pool:

The trail circled around Cathedral Peak in a counterclockwise direction, beginning on the north side.  The craggy peaks dominated the entire hike; the light was continually changing, as the clouds streamed across the sky.  This is the north side of the peak: 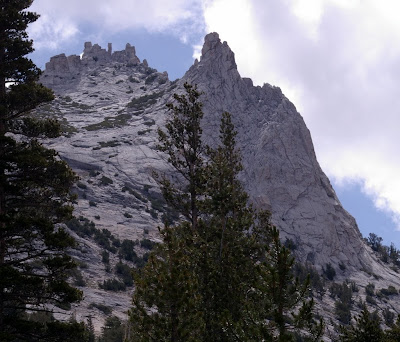 As we got up into the high country, we saw a woodpecker flying back and forth to her nest (a hole in a dead tree), feeding her babies: 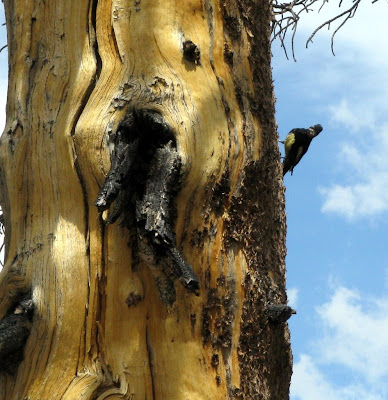 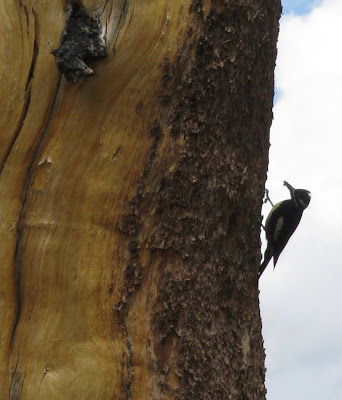 This is the west side of Cathedral Peak: 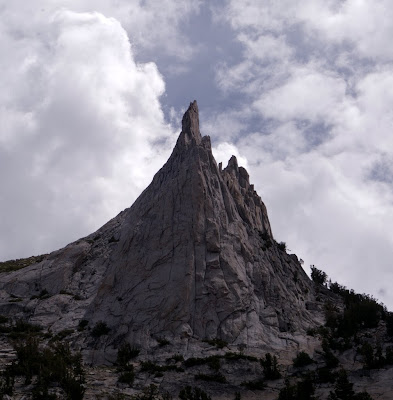 Eventually, we reached the south side of the peak: 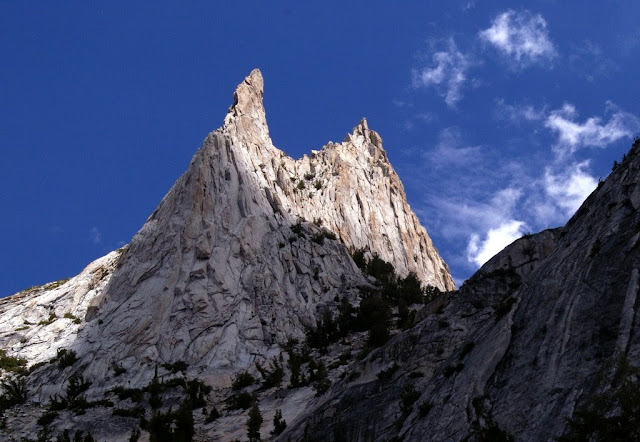 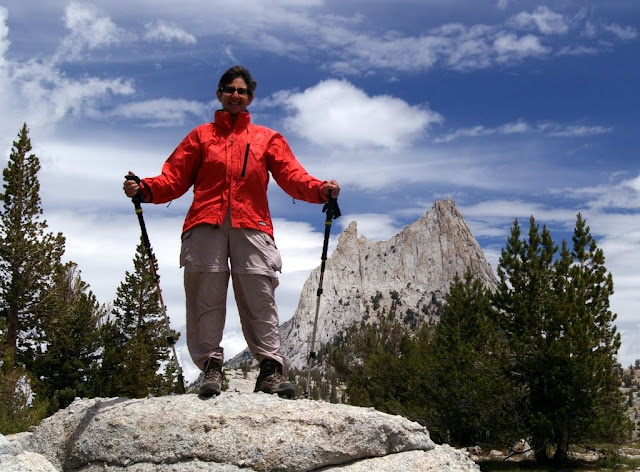 From the pass, we looked down at the Upper Cathedral Lake basin: 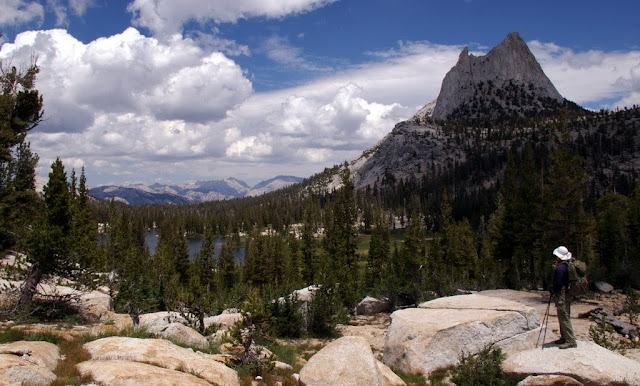 The shores of Lower Cathedral Lake were lined with acres of glacially-polished sheets of granite, containing inclusions of big quartz crystals that had been sheared off and buffed to a shine by the ice: 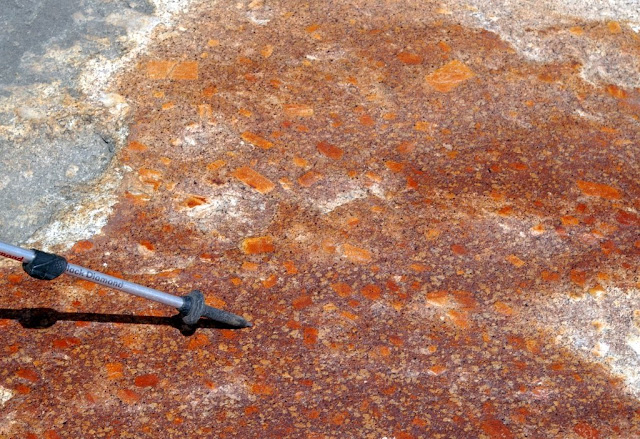 Nearby, there were unpolished examples of exactly the same sort of rock; the jagged chunks of quartz were like walnuts in fruitcake: 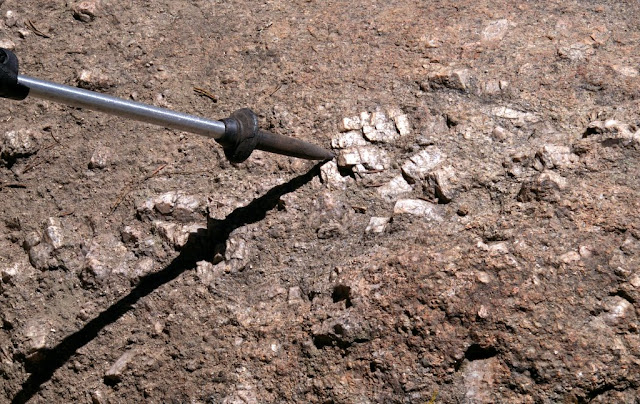 Friday, July 12:  We left Tuolumne Meadows and headed south to Rock Creek, between Mammoth and Bishop.  We were able to get a campsite at East Fork Campground; once again, there was no nearby boondocking.  The campsite was adequate, although there was very little shade.  Late that afternoon, we hiked up to Ruby Lake.  The lake itself was austere and bleak, but there were phenomenal views of the Little Lakes Valley from the trail: 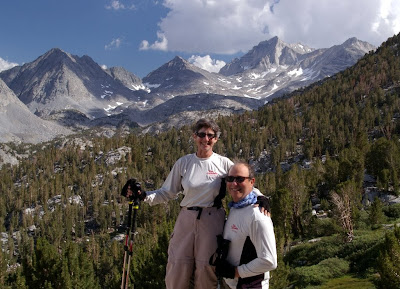 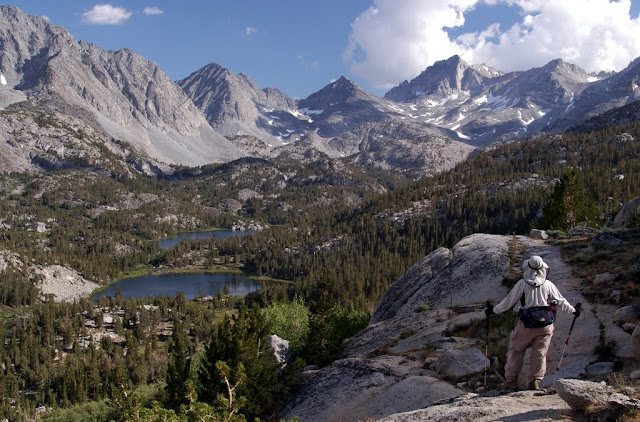 Saturday, July 13:   We hiked the entire Little Lakes Valley, including the Gem Lakes and Morgan Pass: 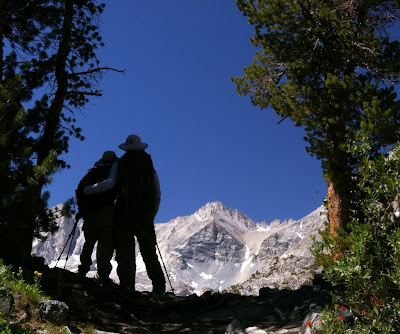 Up at the 11,000 foot level, the Indian Paintbrush was just starting to poke up: 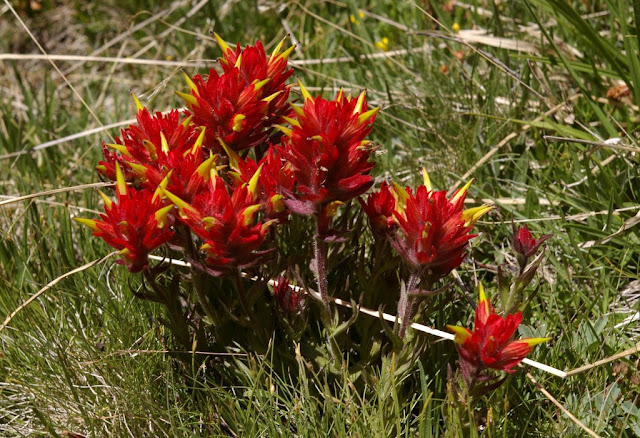 We saw something we’d never noticed before – at the higher altitudes, the conifers were producing bright red baby cones: 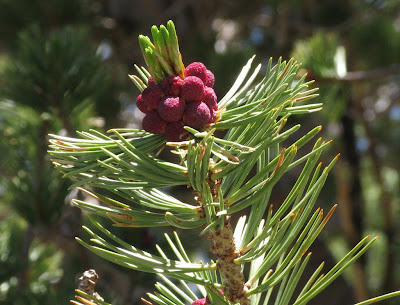 Morgan Pass was bleak, austere, windy, and cool.  Back down in the meadows along the stream, the wind ruffled the grass:


Below the outlet from Long Lake, we came across a wonderful patch of flowers: 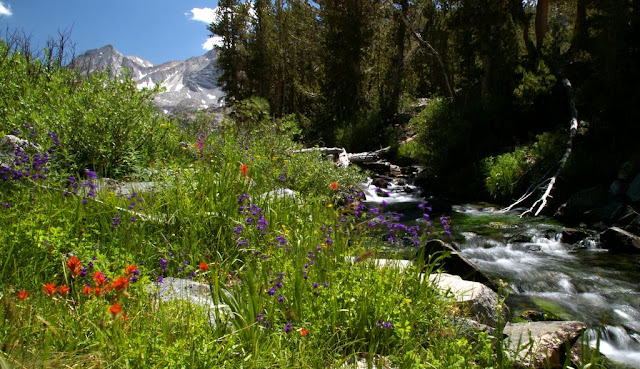 This is Felice’s view of many of my photos – I am crouched over my tripod, blocking much of the scenery: 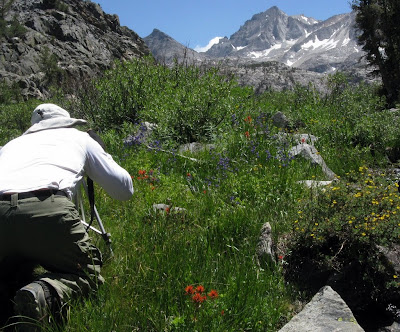 At the end of the day, we found a shady and cool spot near Rock Creek.  We splashed around for a while and then enjoyed a cold drink next to a small rapids: 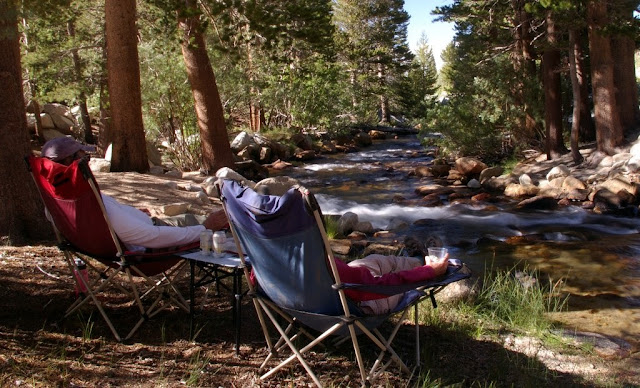