Tioga During the Pandemic: June 2020

After months of self-isolation, and after things began to open up, we decided to take a short "socially distant" boondocking trip to the Eastern Sierra.  Felice deftly snagged one of the scarce online reservations for a week of "day use" in Yosemite, so off we went!

June 17:  We were concerned that the exodus of RVs from Southern California would fill all of the available boondocking sites near Yosemite, but we had no problem finding a site.  (The access road was very rough, so we crawled up the hill at five miles an hour.)

We camped at about 7800 feet, in an area southwest of Mono Lake and the Mono Craters.  This is a shot taken that first evening from a forest road near our campsite -- the lake is just visible on the left side of the shot, and the craters are on the right:

June 18:  We drove up to Saddlebag Lake near Tioga Pass, knowing that the ferry was not running and that we would have to hike around the lake in order to get to the Twenty Lakes Basin.  Although it was worth the extra effort this time, we will never again begrudge the fare charged by the ferry operators.  The ferry saves a total of four hot and rocky miles.

It was eerie to be in the Lakes Basin with virtually nobody else around, a theme that would run throughout our week in the Tioga area.  The snow on the ground at ten thousand feet (the elevation of the basin) had largely melted, but there was still plenty of snow on the surrounding peaks.

We hiked off-trail, along the granite slabs, to Cascade Lake, which was just at the tree line.  The lake itself was nothing special, but North Peak (over 12,000 feet) towered above us: 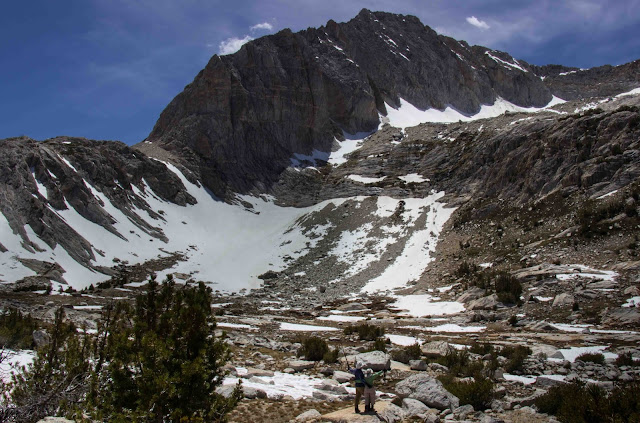 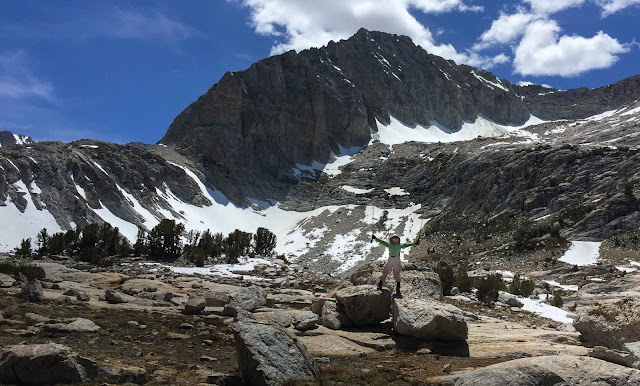 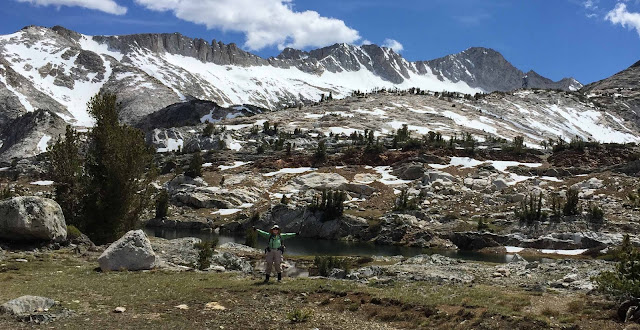 June 19:  We drove into Yosemite, through the dreaded entrance kiosk.  The drive took only a half-hour, and the kiosk was a breeze -- just a few minutes' delay, much shorter than usual.  The computerized reservation system appeared to work perfectly -- well done, Rangers!  We predict that this will be the model for the future --  instead of admitting everyone who shows up (a recipe for overcrowding), the park service will limit the number of visitors each day.

We took the trail to Spillway Lake, starting at the Mono Pass trailhead.  The stream crossings were a little tricky -- slippery rocks and high water -- but not impossible.  The meadows were already green, even though the wildflowers had not yet arrived.  As at Saddlebag, it was very strange (and very pleasant) to be the only people in this immense "Sound of Music" landscape.  That's Parker Peak on the left and Kuna Peak on the right, both at about 13,000 feet:

We stopped for lunch along the outlet stream from Spillway Lake: 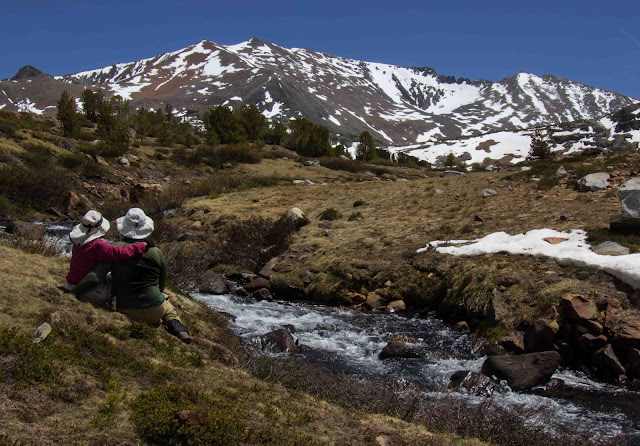 There were still a few big snowbanks overhanging the stream: 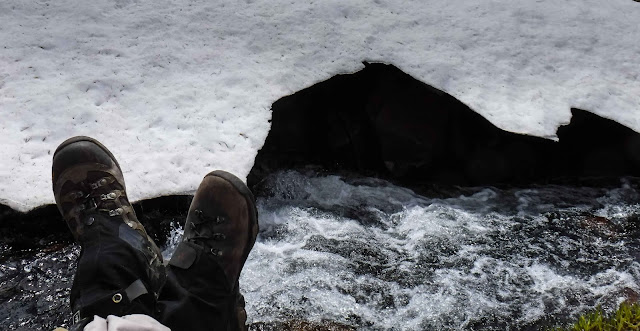 June 20:  Before we left the campsite, I snapped another in a series of "little trailer in a big landscape" shots.  The photo does not show the silence and the sound of the wind in the trees and the cool breeze coming down the canyon every evening: 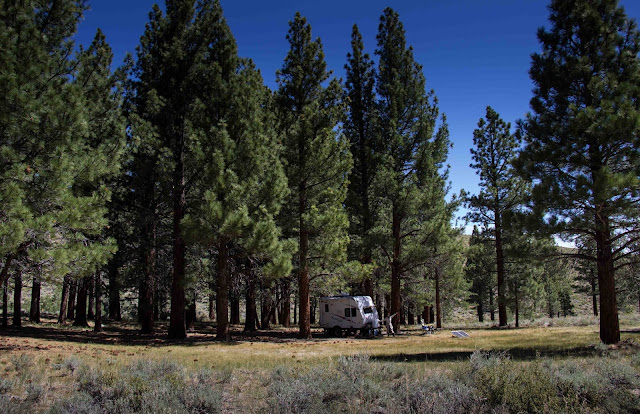 There were several really huge pine trees near the campsite -- we could not tell if these were Ponderosas or Jeffrey pines.  Next time we visit, we will come prepared with the information we need to tell the difference: 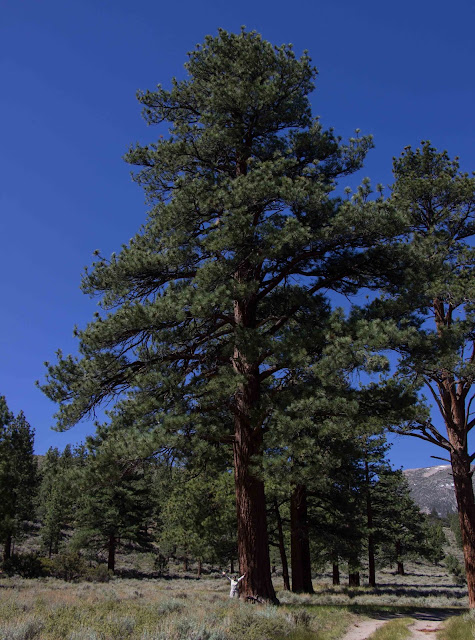 We drove up to the Bennettville trailhead, near Junction Campground.  (Some books call this the Mine Creek trail.)  The trail follows the creek past a string of lakes up into the high country.  This is Shell Lake, with Mt. Conness in the background:

We ended up at Spuller Lake, with White Mountain in the background: 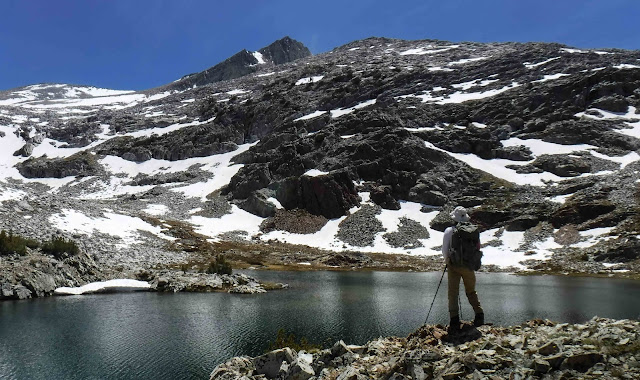 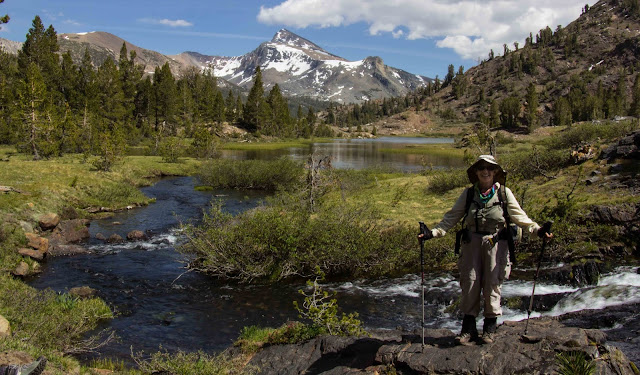 June 21:  After three fairly effortful days, we decided to ratchet back a little.  We took the short May Lake trail, which was more crowded than the terrain on the eastern side of Yosemite.  The other hikers were very good about stepping aside to maintain the required distance and wearing masks when that was not possible, but it still felt odd to be worrying about infection while hiking.  Mt. Hoffman looms over the lake: 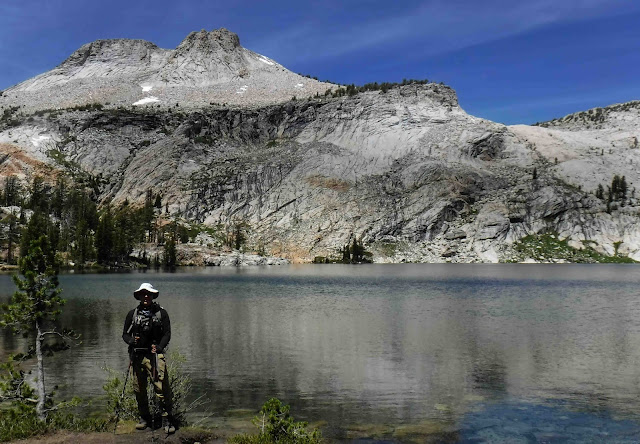 That afternoon, we took our bathing suits and water shoes to the Lyell Fork of the Tuolumne River: 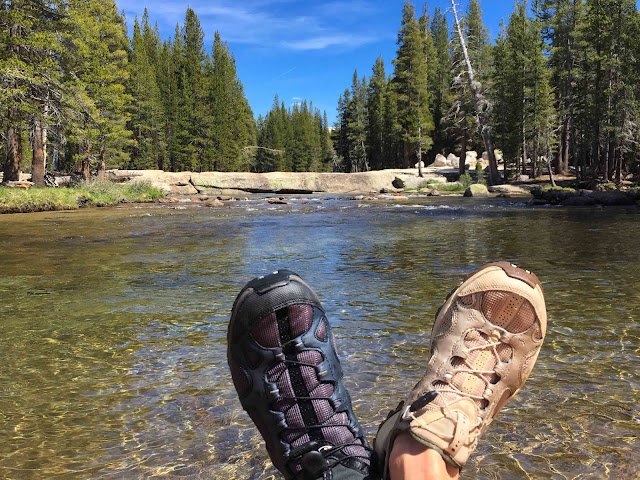 The water (actually, the snowmelt) was very cold -- at most 50 degrees.  Felice bravely dunked (once), and I did my best to click the shutter at the right time to document the moment: 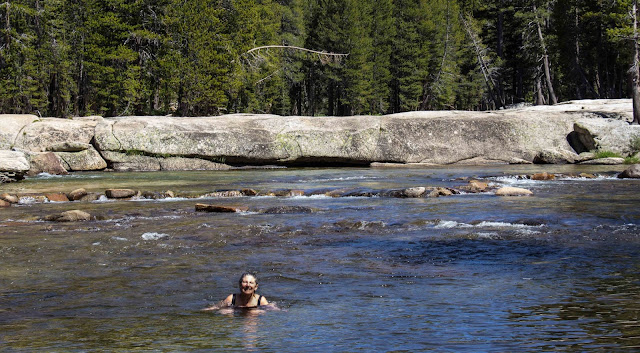 June 22:  Another photo of the campsite, still trying to capture the sense of isolation and privacy.  The trailer was in the shade all day, but the solar panel was in full sun, thanks to the extra-long cable.  This kept the trailer cool while fully charging the battery every day: 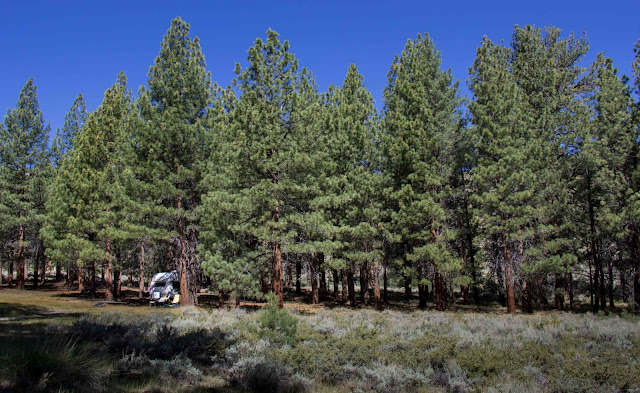 We drove up to to Tuolumne Meadows and took the Elizabeth Lake trail.  The trail is not too long but is pretty steep --a good workout.  Unicorn Peak is visible from the shore of the lake: 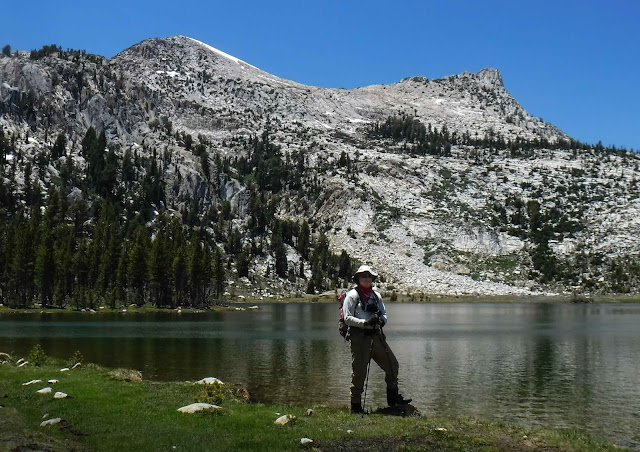 Although the official trail ends at the lake, there is a "use trail" that follows Unicorn Creek into the upper part of the drainage -- a very inviting green meadow leading up into the alpine terrain, with a cool breeze flowing downstream: 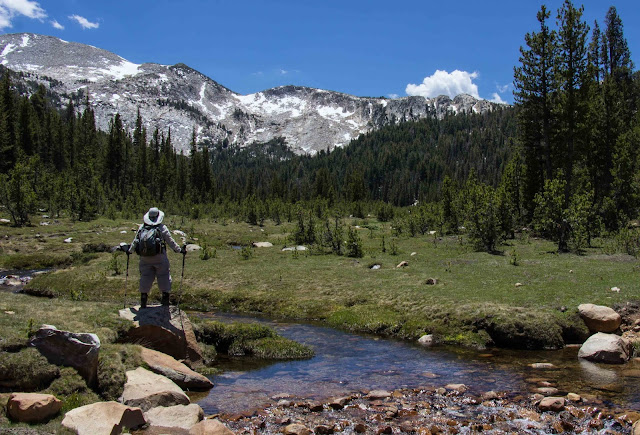 June 23:  The forecast was for hot weather (even at high altitude), so we wandered upstream along the Lyell Fork of the Tuolumne River.  As with so many other places we visited this week, a usually-crowded trail was virtually empty: 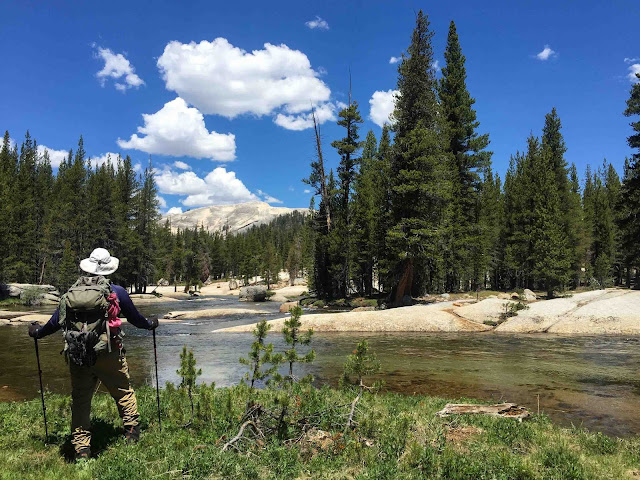 Veering off of the John Muir Trail, we followed a "use trail" upriver.  When we came to Rafferty Creek, a tributary, we could not find a safe place to cross -- the stream was a little too wide and a little too deep.  So we built a log "bridge."  Felice spotted a log with a pointed end that looked like a barracuda.  Using a rope, I dragged it into position: 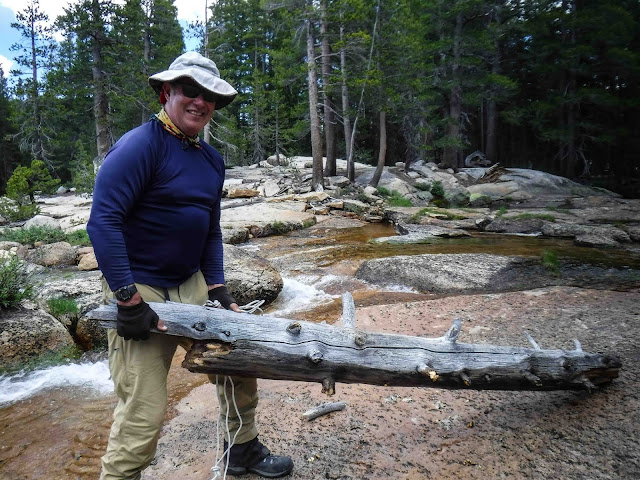 We then guided the sharp end into a gap in the rocks so that it was anchored in place -- Felice's pole points to the gap: 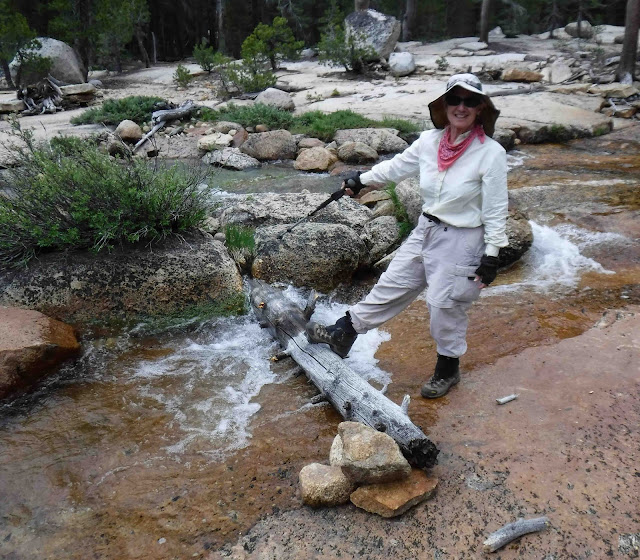 After crossing our "bridge," we found a great swimming hole -- our boots enjoyed the view: 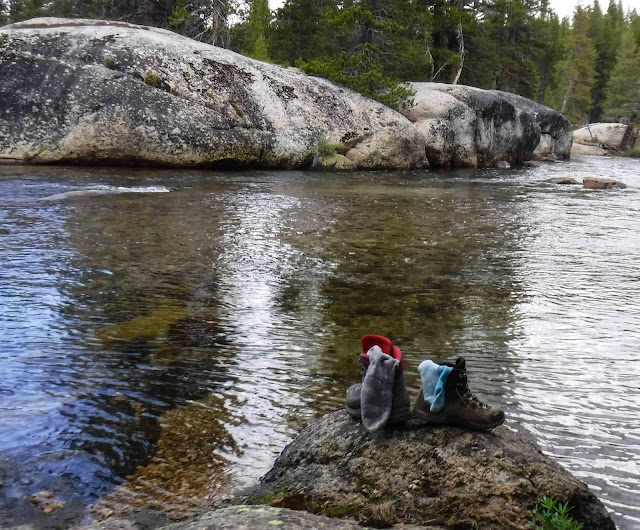 Just after we changed back into our hiking gear and headed back, it started to rain.  There was quite a bit of thunder, but we didn't get to see any lightning.  The sun came out briefly when we got to the bridge where the John Muir Trail crosses the river: 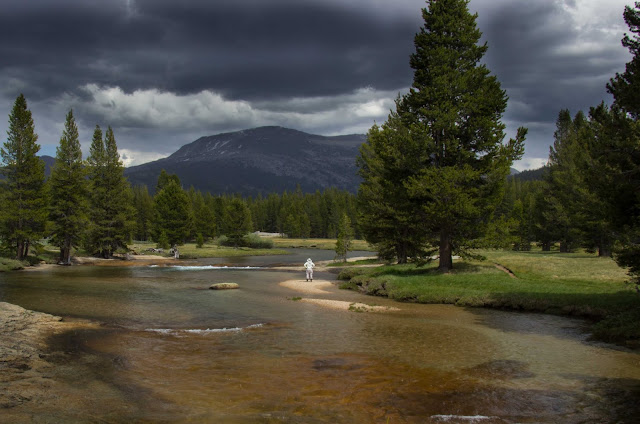 Back at the trailer, it was sprinkling lightly -- just enough to wet the sagebrush and release that wonderful spicy Western fragrance.

June 24:  We headed home.  The truck's blower motor (and thus the air conditioning) died just before we left.  We rode for seven hours across the Owens Valley and the Mojave Desert with the windows wide open, buffeted by hundred-plus degree gusts at 60 mph.  Too noisy for the radio, or podcasts, or Pandora.  The water in the water bottles was hot, and we could not stop for ice in the gas station mini-markets because we were not sure if the surfaces in the stores had been properly sanitized.  A very long day.

It is shocking how dependent on air conditioning we have become!  We tried to cope by mopping our shirts and heads with wet bandanas, just like the bad old days.  Felice took a photo of the temperature display in the rear view mirror.  It looks like I am having a lot of fun, doesn't it? 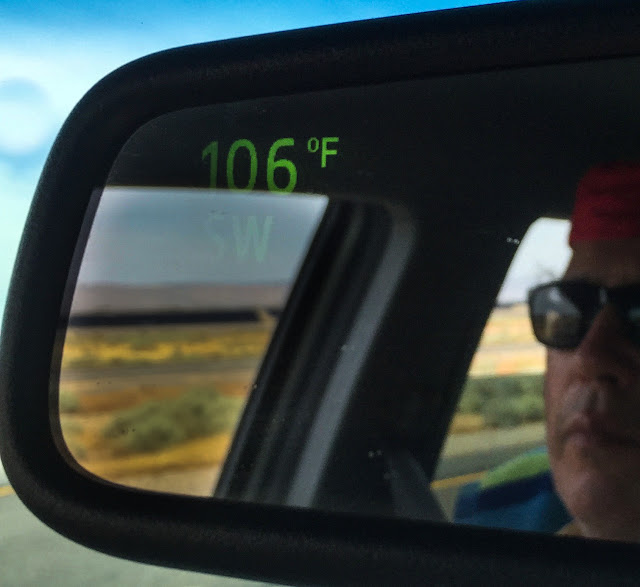