(Remember to click on a picture to enlarge and then click "back" to get back. If you click again, the picture gets even bigger. I apologize in advance for the number of photos – taking pictures in Yosemite in the springtime is like shooting fish in a teacup. You can't miss.)

We have always avoided Yosemite Valley; to quote Yogi Berra, "Nobody goes there anymore, it's too crowded." But we figured that in early March, when the weather is cold and there are no major holidays, we would take a chance. We are very glad that we did: the park was virtually empty, the falls were flowing fairly well, and the campground was quiet.

Sunday, March 4: The drive to Yosemite was a pleasant surprise – we had remembered it as an endless ordeal, but it only took seven and half hours, even while pulling the trailer. We were greeted with the usual spectacular view as we came into the Valley, which provided a perfect backdrop for the obligatory portrait of our new trailer: 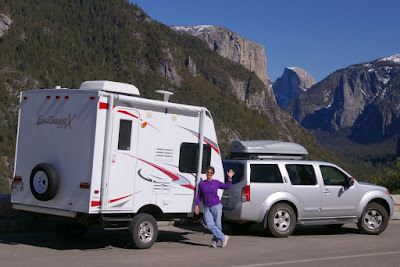 After getting situated in Upper Pines Campground, we took a late evening walk to the bottom of Lower Yosemite Falls. The moon was almost full – this was a 30 second exposure at f 3.5, with an ISO of 800: 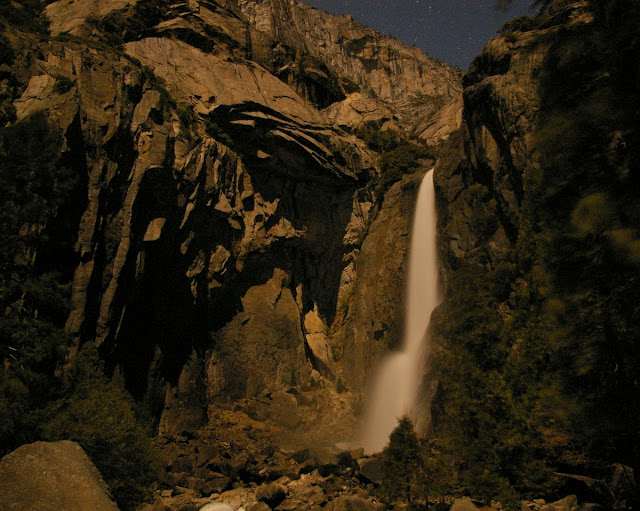 Monday, March 5: We hiked up to Nevada Falls, a fairly ambitious hike (especially because the shorter Mist Trail route, via Vernal Falls, was closed, supposedly because of ice). As it turned out, though, the longer "winter" route was quite icy; our microspikes came in very handy. Many people turned around because of the difficult conditions. We "boulder hopped" (carefully) to the base of the falls, which were thunderous -- there was no one else around: 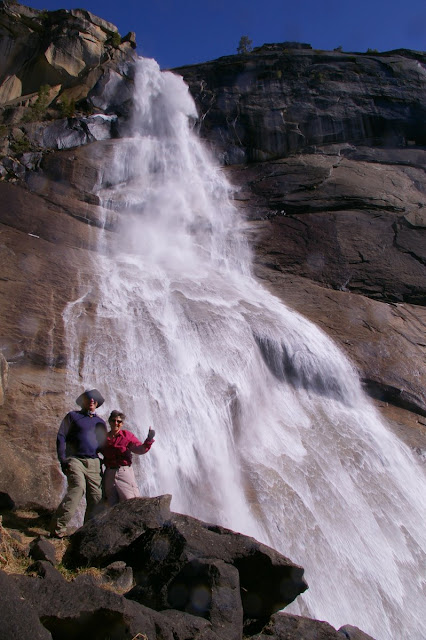 These falls are 600 feet high – in this video clip, the "snowcone" of frozen spray can be seen at the base of the falls:

(The falls were so loud that the noise overwhelmed the microphone on the camera -- hence the odd audio.) We then hiked back down to the top of Vernal Falls, expecting that we would have to slowly and carefully retrace our steps over the icy portion of the trail. At the falls, we met a family with young children and asked them how they had managed the ice. They responded, "What ice?" It turns out that they had used the Mist Trail route and that there was no ice at all. We happily took that shortcut down the hill, and we were very glad that we did. Otherwise, we would have missed the vivid rainbow at the base of the falls -- this picture might be worth double-clicking: 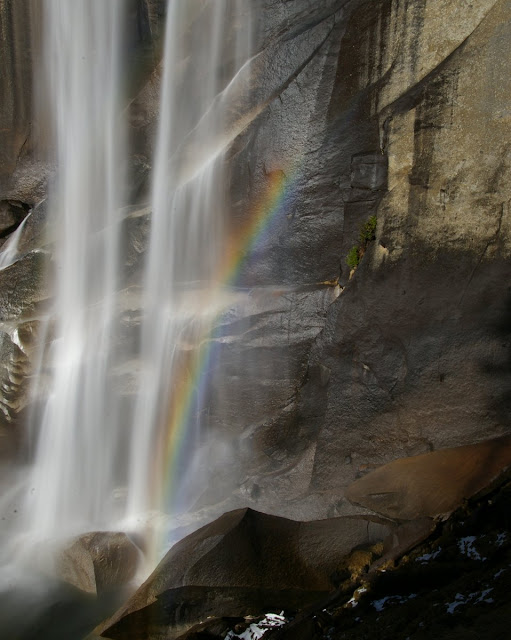 After some experimentation, I discovered that my polarizing filter intensifies the colors of the rainbow. This was a half-second exposure at f 27, with an ISO of 200. Unfortunately, no photo can show the mesmerizing pulsation of the rainbow: the colors seemed to wave rhythmically, as the water surged over the falls. It looked as though the colors were springing directly out of the dark rocks, into the sunlight.

(This is an edit, added in late 2013 -- after learning how to use Lightroom, I went back and fiddled around with the preceding picture, hoping to get a slightly more realistic tone to the water and the rock.  The shot was taken in the late afternoon during "golden hour."  Even though the original was a jpeg, rather than a "raw" file, and even though I could not change the white balance, I was able to tweak the settings to achieve something close to the desired result, below.) 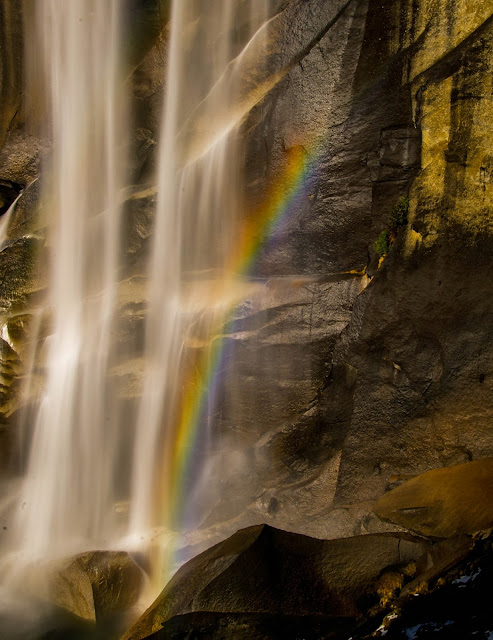 On our way back down to the Valley, we were entertained by a pack of almost-tame mule deer grazing by the side of the trail: 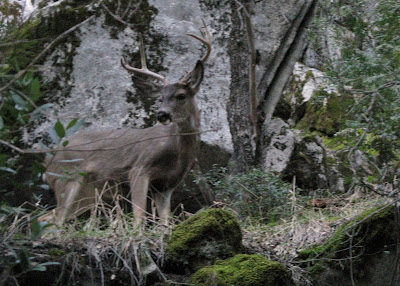 Tuesday, March 6: As predicted, there were snow showers all day long, which interfered with the views. Nevertheless, we managed to have fun – we spent most of the day hiking around the meadows in Yosemite Valley: 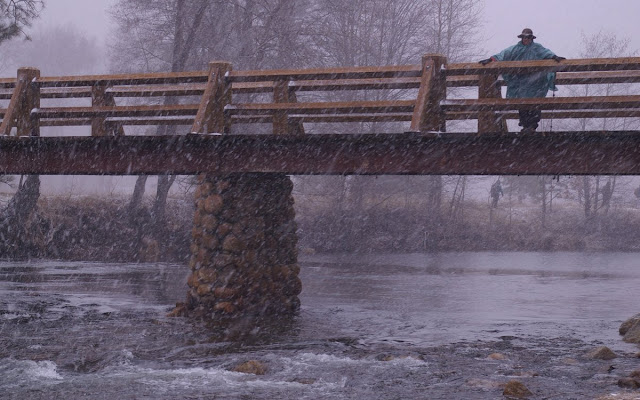 Later in the day, Half Dome peeked through the clouds: 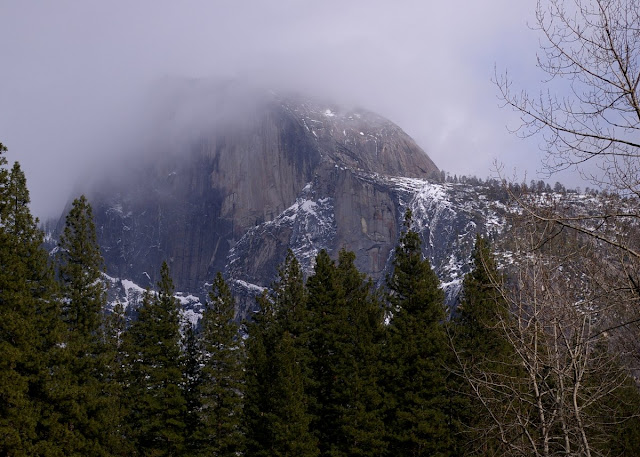 Wednesday, March 7: The night had been very cold and windy (although we were perfectly comfortable in the trailer – hurrah for insulation!). When we emerged, we were greeted by our neighbor, a small young Chinese lady, who was carrying bags of food. She asked us if we wanted any of it, because she was leaving unexpectedly. We asked her why she was leaving; she told us that she had spent the entire night shivering in her tent as a bear walked around and around, sniffing and growling. Apparently, she had not washed out her cooking pan and had stored it inside her tent, and the bear reached in and grabbed it! We asked her how she knew it was a bear. She told us that she could see its shadow in the moonlight on the walls of her tent: "I was prepared to die!" she announced.

After she hurriedly packed up and left, we opened our mysterious care packages to discover that she had left us (among other things) an enormous coconut cream pie and a huge pomelo, which is similar to a grapefruit (but much more fibrous, as we later discovered): 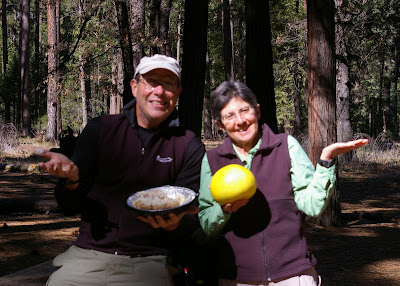 We then embarked upon our most ambitious hike of the week, from the valley floor to the top of Yosemite Falls, a round-trip of almost 8 miles with a vertical gain of over 2700 feet. This hike was strenuous, but not quite a death march. In the heat of the summer, though, this would be a very difficult hike. Shortly after passing Columbia Point, we were greeted with our first full view of the upper falls: 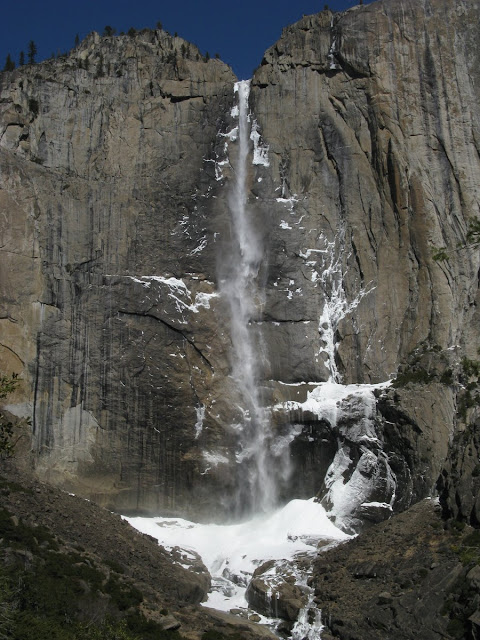 Note the patches of snow on the walls of the canyon – during the very cold and windy night, the falling spray had frozen in midair and had adhered to the rock. As we were hiking up the trail, and as the sun hit the patches of ice, they would suddenly crack off and tumble down the mountain, sounding exactly like nearby lightning and thunder (or, worse yet, a rockfall), echoing through the canyon. The frozen spray also formed a huge snow cone at the base of the falls: 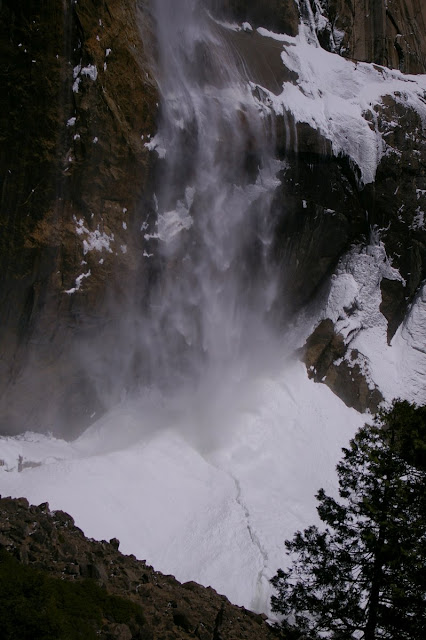 The upper falls are over 1400 feet high – in this clip, we followed the water from the top all the way down to the snow cone:

From the upper portion of the trail, we could see that Half Dome had been sprinkled with fresh snow: 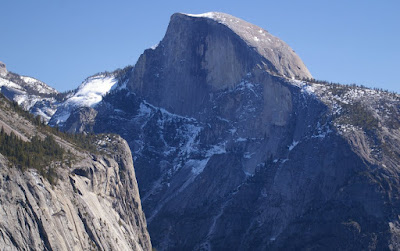 It took four hours to get to the top (with frequent stops). The viewing area at the edge of the cliff was covered in ice; but Felice conquered her vertigo and was (rightfully) rather proud of herself: 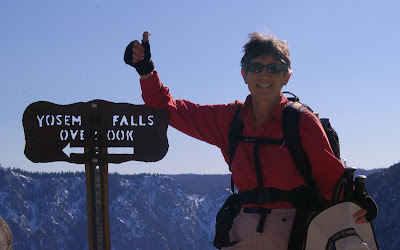 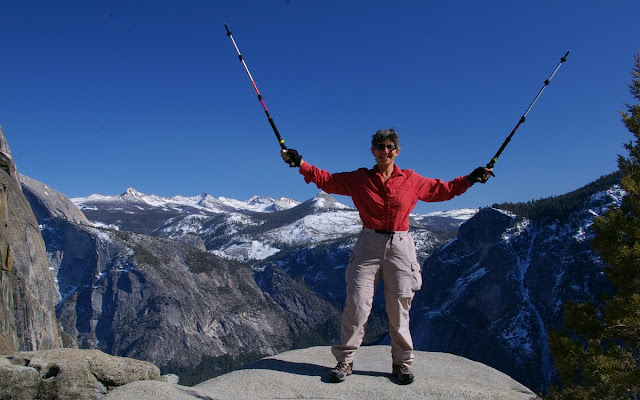 On our way back down (which took another three hours), we stared up at the shadowy sheer cliffs hanging over our heads, rising more than 1000 feet straight up from the trail. One hopes that no rocks will fall: 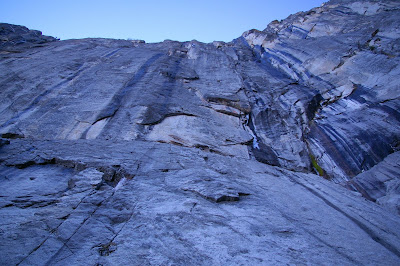 By the time we were nearing the bottom, the setting sun had begun to inflame Half Dome: 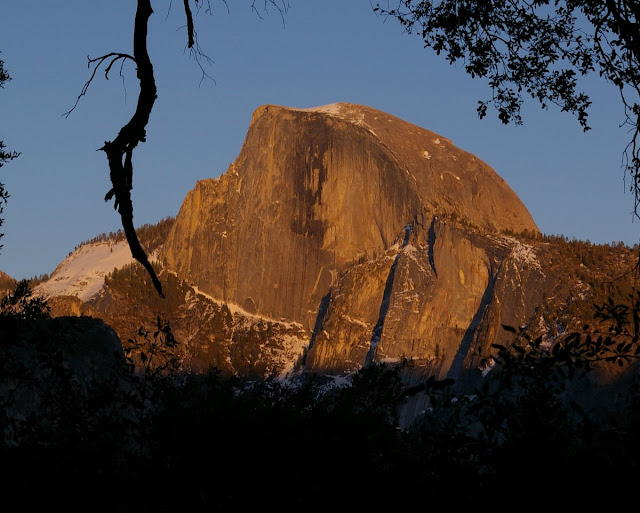 Later that evening, we decided to head back out to the meadow near Yosemite Falls to watch the moon rise over Half Dome. That's Mars in the upper left-hand corner of the picture – this is a 20 second exposure at f 5.6 with an ISO of 200: 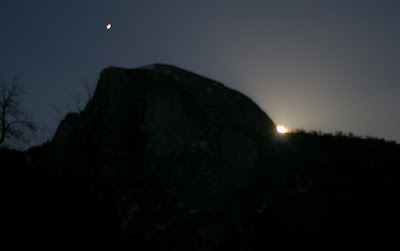 Thursday, March 8: We drove up to Badger Pass for a snowshoe hike to Dewey Point, a round-trip of over 6 miles on a trail that heads north from Glacier Point Road. The snow depth varied widely, from none to about two feet: 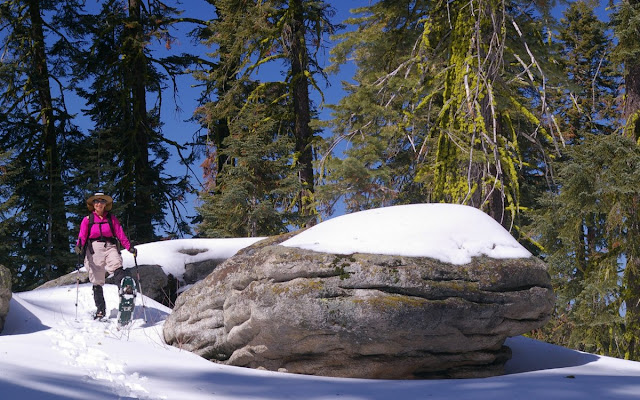 At times, we decided to carry our snowshoes and hike, rather than shuffling along slowly – this meant that I was sometimes loaded up like a pack mule: 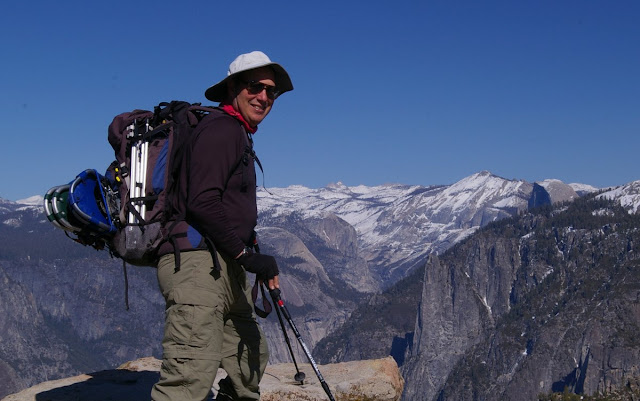 At the end of the day, we took a short walk to Bridal Veil Falls. The swirling wind was whipping the water from side to side: 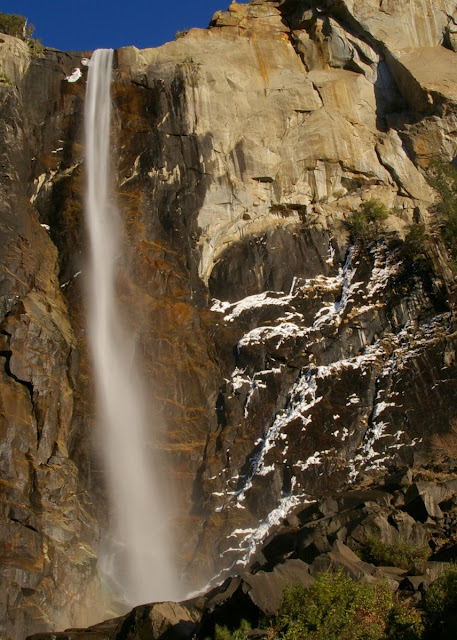 The snow and frozen spray contrasted sharply with the orange rocks at the base of the falls: 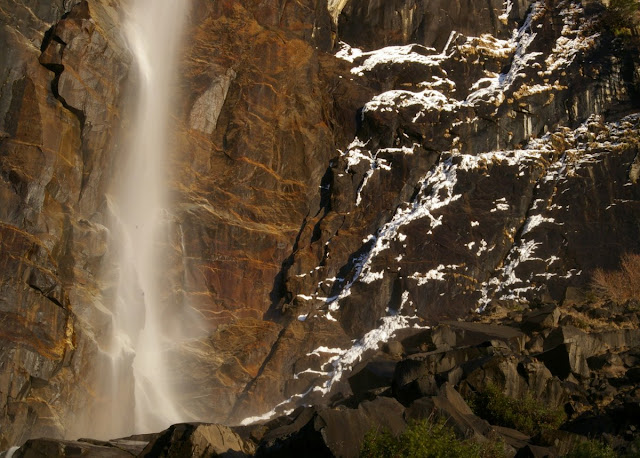 Friday, March 9: We took a walk around Mirror Lake. The most interesting part was the Ahwiyah Point Rockslide, a huge debris field resulting from exfoliation of an 1800 foot granite cliff face on the north side of Half Dome. This slide, which took place in March of 2009, was so cataclysmic that it registered as an earthquake with a magnitude of 2.4. Surprisingly, the talus was not composed exclusively of huge boulders, as one might expect; apparently, the failure of the mountain was so violent that much of the rock shattered during the fall and on impact, creating a mess of sand, gravel, and boulders: 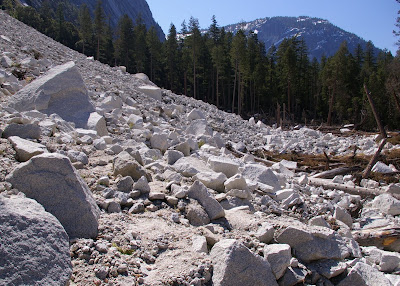 The source of the slide can be seen at the very top of this picture, far above the trail: 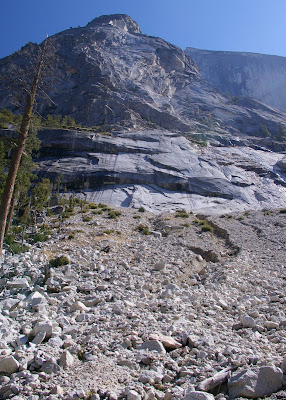 Although we are not sure, it seemed that a couple of very large boulders high on the cliff were dislodged by "frost wedging," in which the freezing and thawing of water in the cracks between the rocks during the springtime will eventually pry the rocks apart. We could see huge "sockets" of raw unweathered rock at the top of the cliff, where the boulders had broken away. From there, I would guess that the boulders dislodged other precariously-perched rocks, and the slide was underway.

Late that evening, we decided to pay another moonlight visit to Lower Yosemite Falls. We were all alone at the base of the falls, a rare privilege. We had heard that there might be a "moonbow" during the full moon, but we couldn't see one when we arrived. I decided to take a time exposure of the falls, mostly because the "rooster tail" at the bottom was so prominent. After the camera processed the image, we were shocked to see the elusive moonbow: 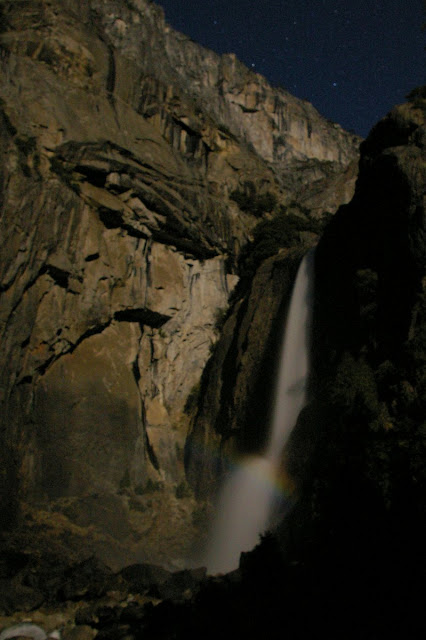 This is the same shot edited in Lightroom, more than a year later: 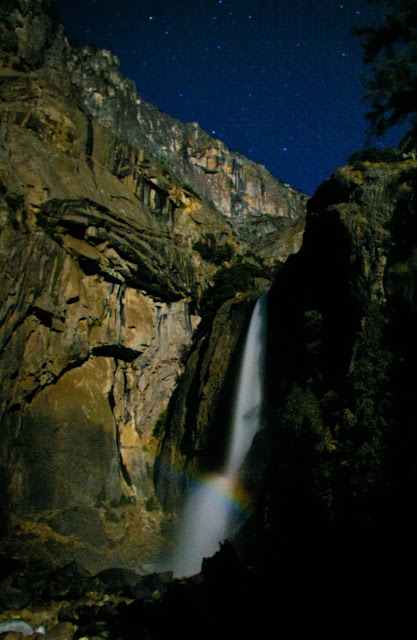 After the camera had revealed the moonbow to us, we were able to see a white streak in the air, but we still couldn't see the colors ourselves. It turns out that since the moon reflects the light of the sun, moonlight contains all of the colors in sunlight. It's just much fainter. Here is a closer view of the rooster tail and the moonbow: 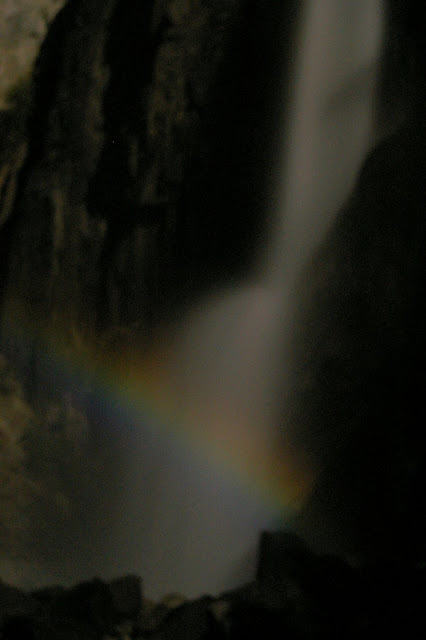 As we left the falls, we were able to see both the upper and lower falls at the same time: 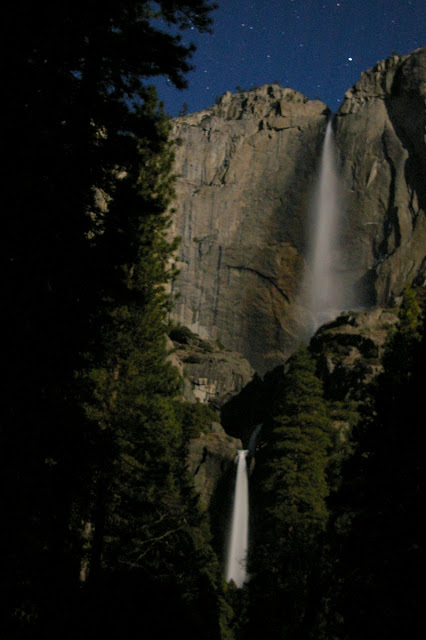 This is the same shot, cropped and edited in Lightroom about a year later: 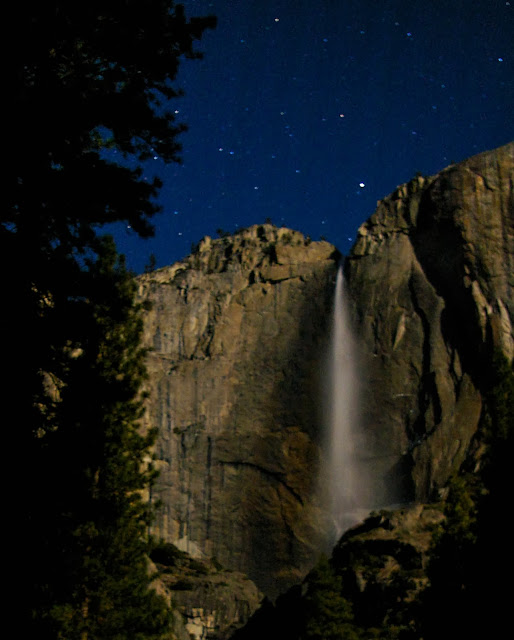 Saturday, March 10: We packed up and headed home; but first we stopped off at Mariposa Grove for a short hike among the sequoias. Since this was a Saturday, the grove was fairly busy. We had heard that this was a terrific sequoia grove, but (frankly) the groves at Sequoia National Park are much larger and denser. We ended the trip with the usual mandatory sequoia shots. The first picture is the entire tree, with Felice at the base. If you enlarge the picture, you can see her at the bottom. The second picture is an excerpt for perspective, so that you can actually see her: 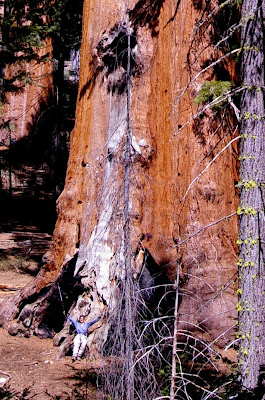