It is tough to find boondocking (or even high-altitude campground camping) in the winter – most campgrounds and roads are closed by snow.  But Azalea, in Kings Canyon, is open and plowed all year, so off we went.  We hit very high winds on the trip north over the Grapevine (gusts over 50 mph, according to the anemometer in Tejon Pass).  We slowed down and traveled in the right lane – but despite the gusts and the truck traffic, the trailer handled it like a champ, which is gratifying and reassuring.  (At home, I had topped off the water tank, which I rarely do when towing, in order to drop the trailer’s center of gravity.)

Tuesday, March 22:  There was a little snow on the ground from the most recent storm: 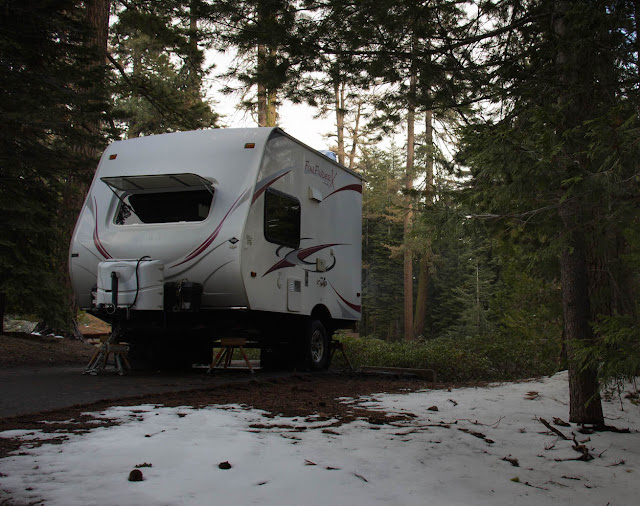 The campsite was cold and shady – just exactly what we were hoping to find.  (It was a quiet site, too, at least until Good Friday.)  Even better, there was a patch of sun behind the trailer, so we were able to stretch out the power cable and deploy our solar panel to keep the battery topped up.

Wednesday, March 23:  We took the North Grove trail out of the Grant Grove area, bagging more of our usual “big tree, little person” shots.  In this “whole tree” photo, it is almost impossible to spot Felice at the base of the tree --  she is just to the right of the small pine tree in the foreground.  I have included a crop-and-zoom shot below it: 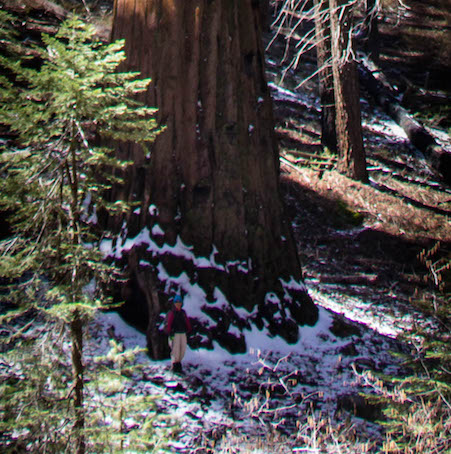 This next photo looks unremarkable, but it is the first time we have deployed our radio remote control shutter trigger.  That means that we no longer have to scamper to get into the photo before the camera takes the shot, and it also means that we can get a greater distance from the camera – about 150 feet: 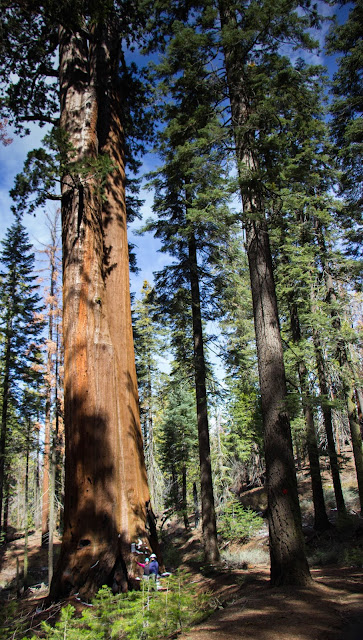 The northern and western parts of the North Grove loop were badly damaged by the Rough Fire of 2015 – many of the giant Sequoias were seriously burned, and I am not sure that all of them will survive.  (It is too soon to tell.)  The ranger at Grant Grove later told us that in recent years, the Park Service did not have the funding to run prescribed burns in the North Grove area, since they had to concentrate on more popular areas of the park.  (And the Park Service does not thin the trees, unlike the Forest Service.)  The absence of prescribed burns, coupled with a lot of dead conifers due to drought and the bark beetle infestation, meant that there was a tremendous fuel load just waiting for a spark.  They got a lot more than a spark.  The fire “crowned,” seemingly destroying everything.  Very sad.

Thursday, March 24:  We snowshoed to Big Baldy.  There was about four or five feet of dense spring snow.  The Baldy trailhead itself was a bit of a mess – it was very hard to find the trail because there was so much snow.  So we drove over to Montecito Sequoia Resort and hiked up from there.  (It seems strange, but if you Google “snowshoeing to Big Baldy,” in quotes, you get no hits at all.  And there are virtually no photos, either.  In summer, this is a very popular trail.  One would think that lots of folks have done this trail on snowshoes.  Maybe they are trying to keep it a secret?) 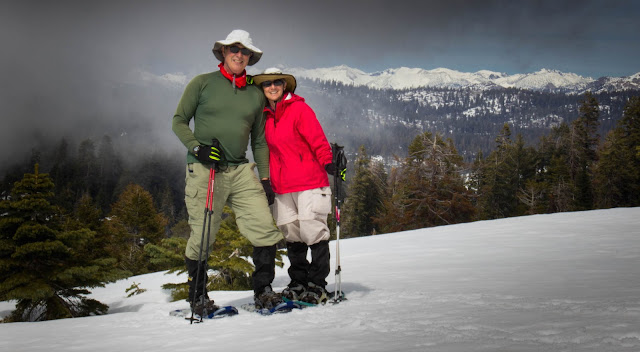 We chose a lunch spot overlooking the avalanche chute that drops off the northwest side of the peak: 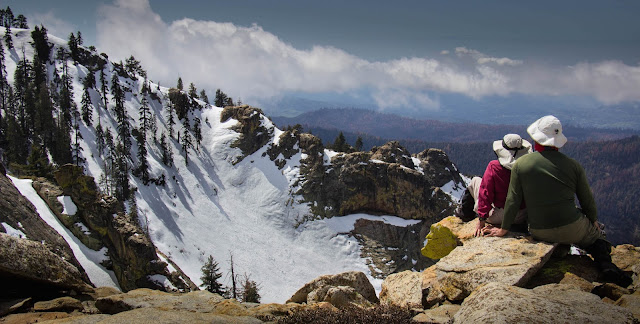 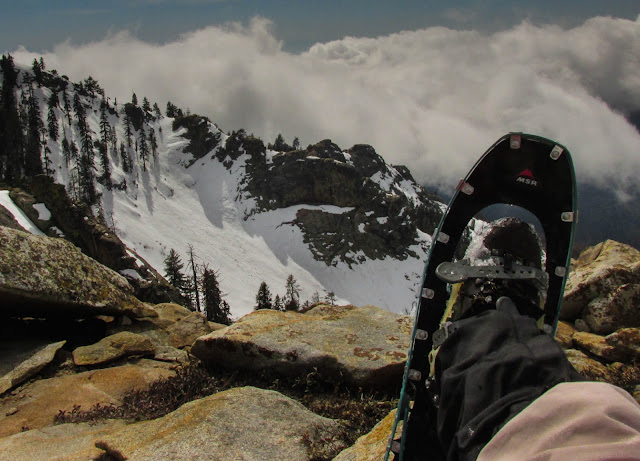 After lunch, we headed up to the peak itself.  The clouds started to blow in – it was fun watching the fog shoot up and over the ridge, but it was not great for photography.

That night, we took an after-dinner walk in Grant Grove, mostly so that I could get my obligatory star shot.  Orion is in the left center of the photo, with the nebula clearly visible.  That’s a very big Sequoia on the right side – the full moon had just begun to rise, illuminating the trees but not yet washing out the stars: 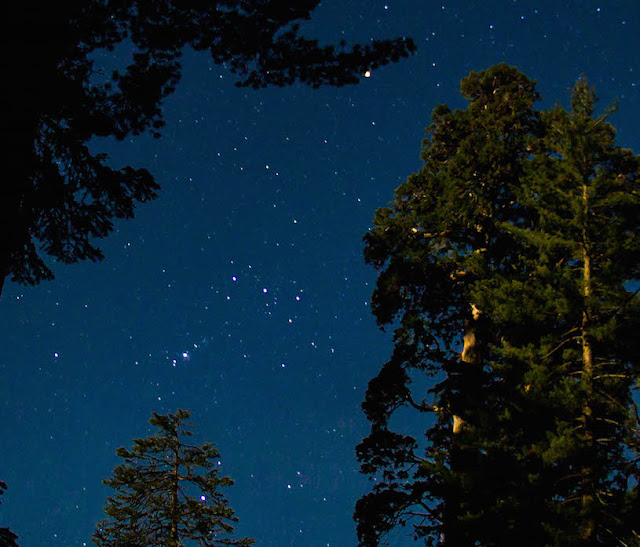 Friday, March 25:  Not surprisingly, the road down from Quail Flat to Redwood Canyon was blocked by thick, rutted, icy snowbanks – it would not have been smart to take the truck down that road and get snagged on a mound of ice jammed underneath ("high-centered").  So instead of driving, we walked the two miles from the highway down to the grove, which was actually very pleasant – there are lots of very big Sequoia trees along the roadway that can’t easily be seen from a moving vehicle, since they are mostly high up on the hillsides.  And -- a bonus -- we saw almost no one the whole day, since access was so difficult.

We had time to do some exploring, so we headed further downhill along the empty road, past the grove, through the Whitaker Forest administered by UC Berkeley.  We walked a total of about eight miles, with an elevation loss (and then gain!) of about 1800 feet.  The footing was very good, so the hike was not at all difficult.

Here is yet another “big tree” shot – we can’t get enough of them – Felice is just to the left of the base:

We hiked down the trail into the grove and found a pleasant place near the stream to lie down under the trees – the fog was swirling just over the treetops:


By the way, that short video was taken with Felice’s iPhone, set to a high-definition frame-rate.  Even with the compression that YouTube applies to uploaded videos, it looks surprisingly good -- try it in full screen with the volume all the way up, to get the sound of the stream.

Saturday, March 26:  We packed up and headed home.  But as we descended Highway 180 toward the San Joaquin Valley, we came upon a really excellent field of California poppies.  We just had to stop: 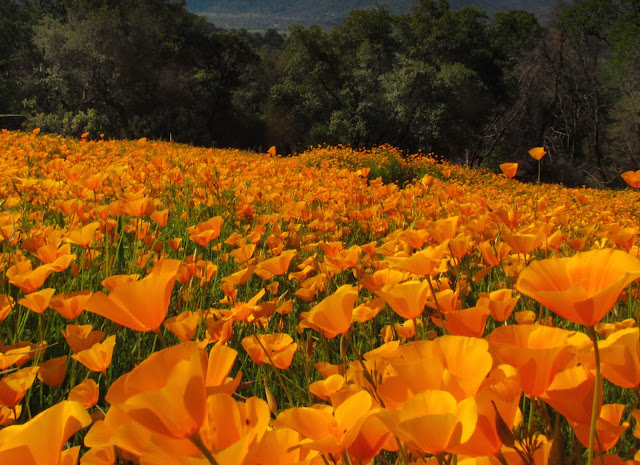 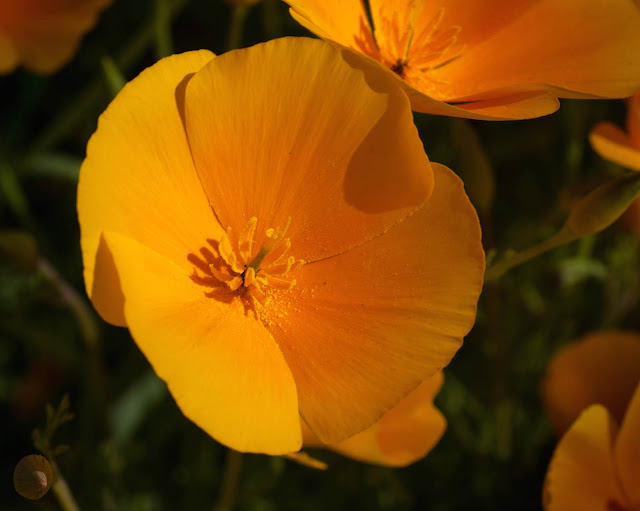 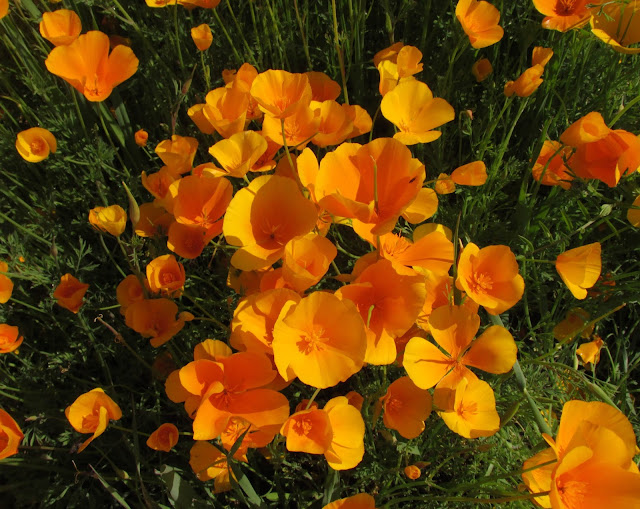