We had a few free days, so we decided to head up to Palomar Mountain State Park, east of Oceanside.  On our way down Interstate 5, we stopped at a rest stop and saw an “MRAP” (mine-resistant armored protected vehicle) with this rather surprising license plate: 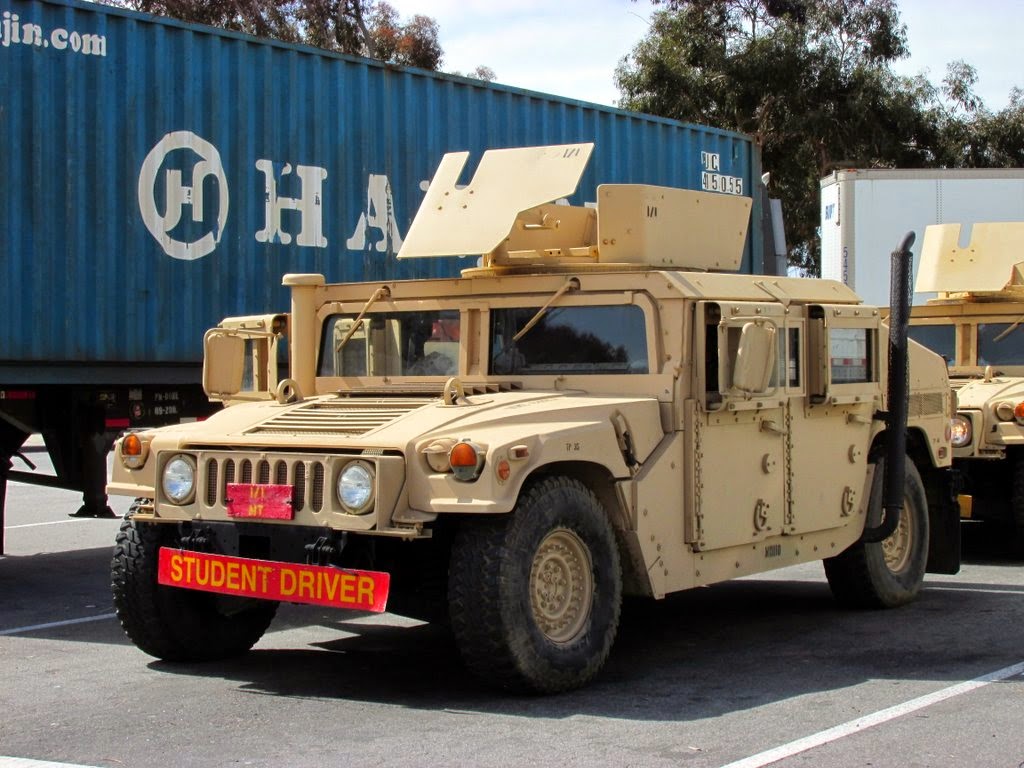 Although this looks like a joke, it wasn't – it turns out there was whole squadron of drivers getting trained.

When we got to the campground that afternoon, it was completely empty and silent, and it stayed that way for the next three days -- the nights were cold and dark, perfect for sleeping.  It was a very pretty campground, with lots of huge trees.  Even though our trailer is tiny, we had a hard time fitting into the "RV designated" campsite, and the apron was far from level – we had to pile up about 5 inches worth of blocks under one of the tires, just to compensate for the slope.

On a sunny and cool day, we hiked in a big loop around French Valley, the lower Doane Valley, and the upper Doane Valley – roughly 6 miles in total.  The French Valley area looked like the old West – high meadows (we were at roughly 5000 feet), dotted with oak and pine, with streambeds cut into the valley floor.  At the north end of French Valley, there was a spectacular grove of really ancient California Live Oak trees -- this one had recently fallen: 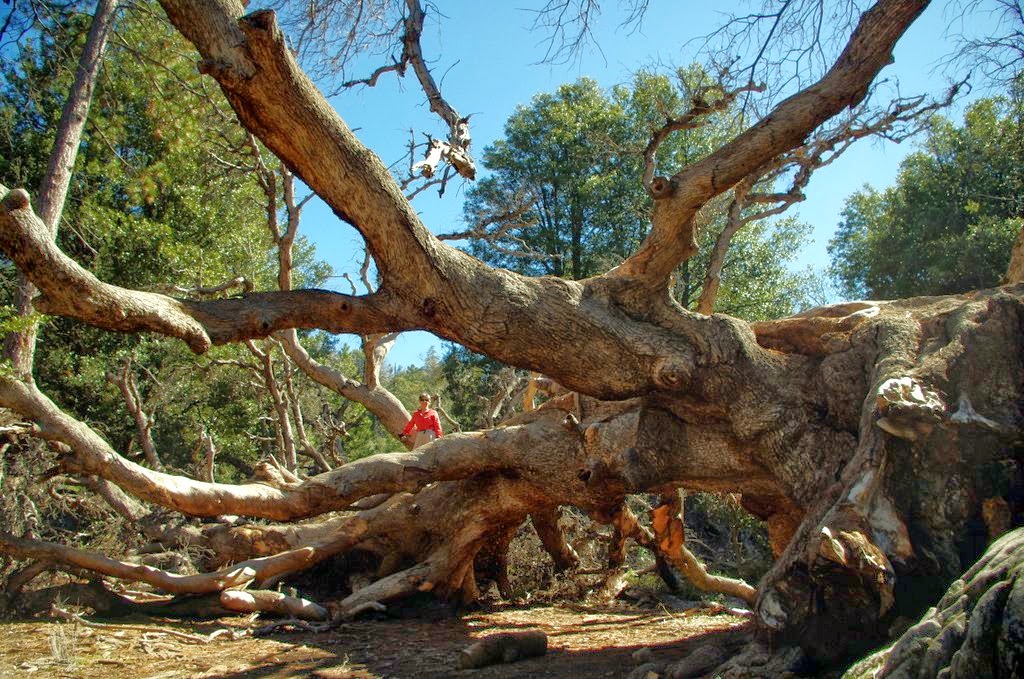 This tree was easily 12 feet in diameter -- my “wingspan” is over six feet: 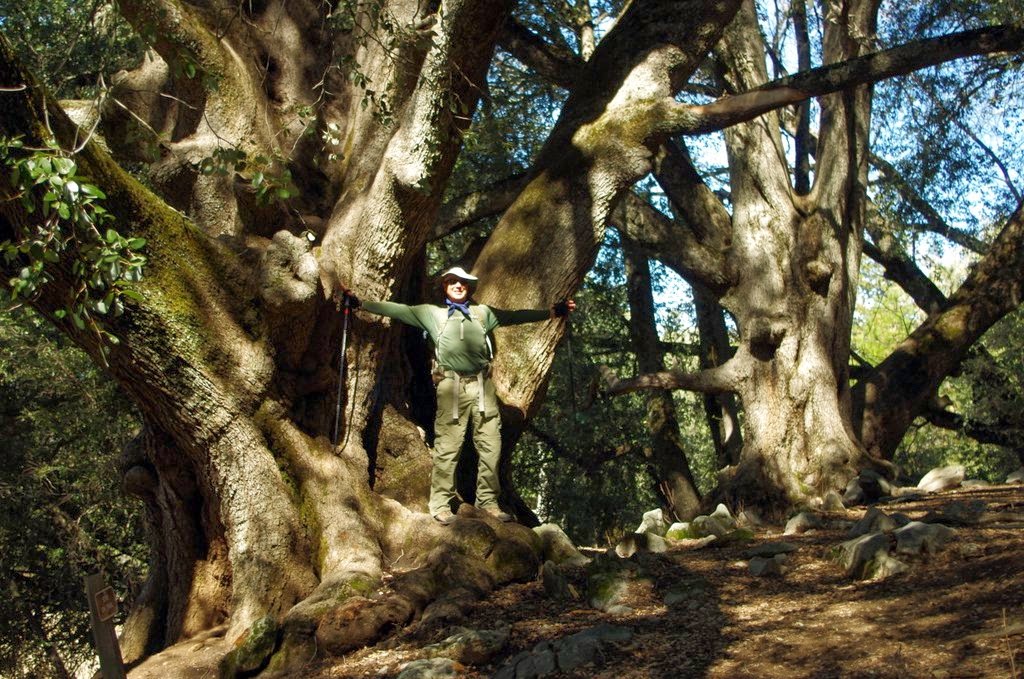 At one point, we came across a flat granite outcropping,  punctuated with perfectly symmetrical conical holes full of rainwater – these were clearly "bedrock mortars."  The Indian women would sit near these holes and grind acorns into mush: 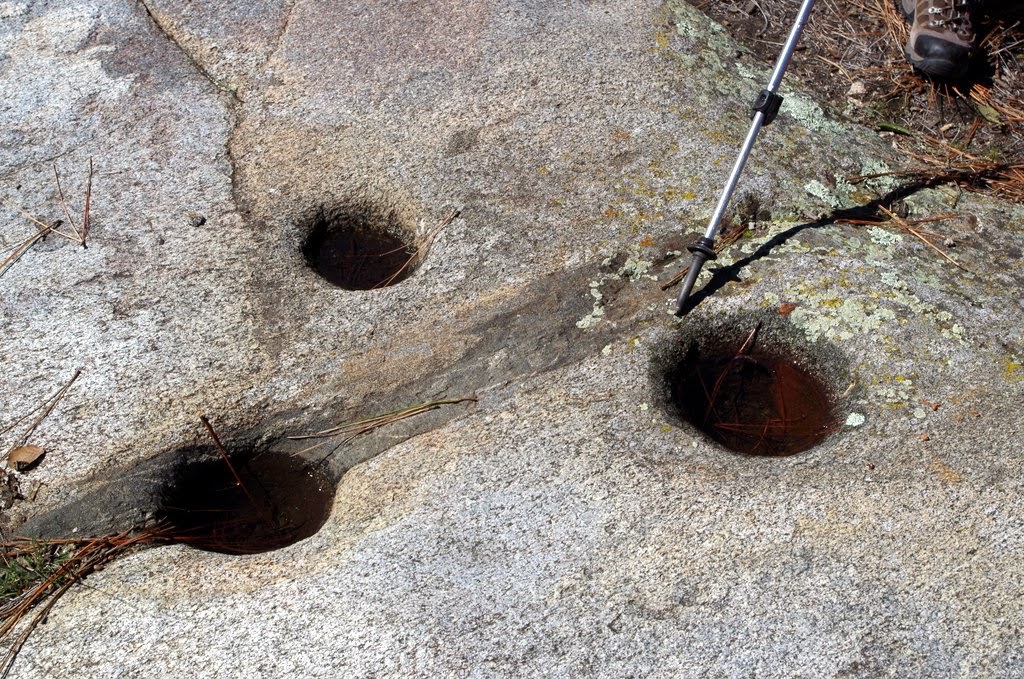 Over the next few days, we came across several other groupings of these pre-Columbian Cuisinarts.  These high valleys must have been very densely populated, especially in the summertime, when the Indians would come up to the mountains to escape the heat.  It was easy to envision groups of women clustered around these mortars, chatting in the shade, while the grindstones thumped in the sockets.  I couldn't figure out, however, why the Indians wouldn't just carry the whole acorns back to their villages in baskets and then grind them on raised stones, rather than squatting uncomfortably on the ground under the oak trees and then transporting the acorn flour back to the village.  There must be a good explanation, but I have been unable to find one.

In the moister areas of the Doane Valley, near the creek, there were groves of very large Western Red Cedars – they looked almost like Sequoias: 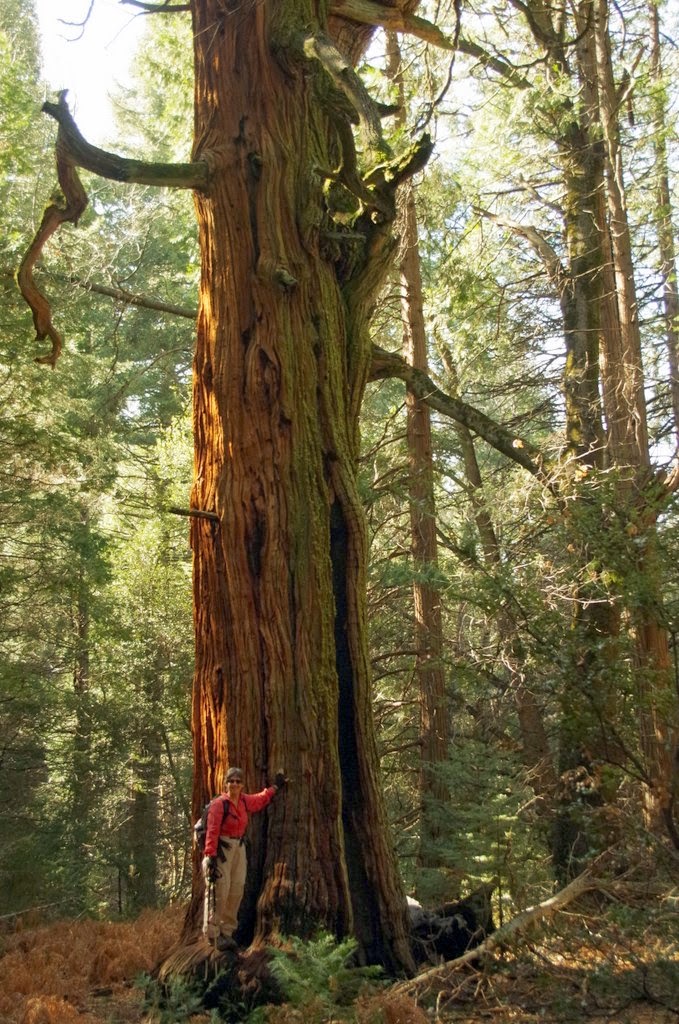 We took the Observatory Trail from the Observatory Campground up to (you guessed it) the Observatory.  For much of the way, the trail parallels the road, although the road is screened by trees.  On a busy weekend (with all of the high-performance motorcycles roaring up and down the road), this would be a noisy trail.  On a weekday, it was very peaceful.  At the upper end of the trail, the Forest Service had posted this phenomenally detailed and helpful map: 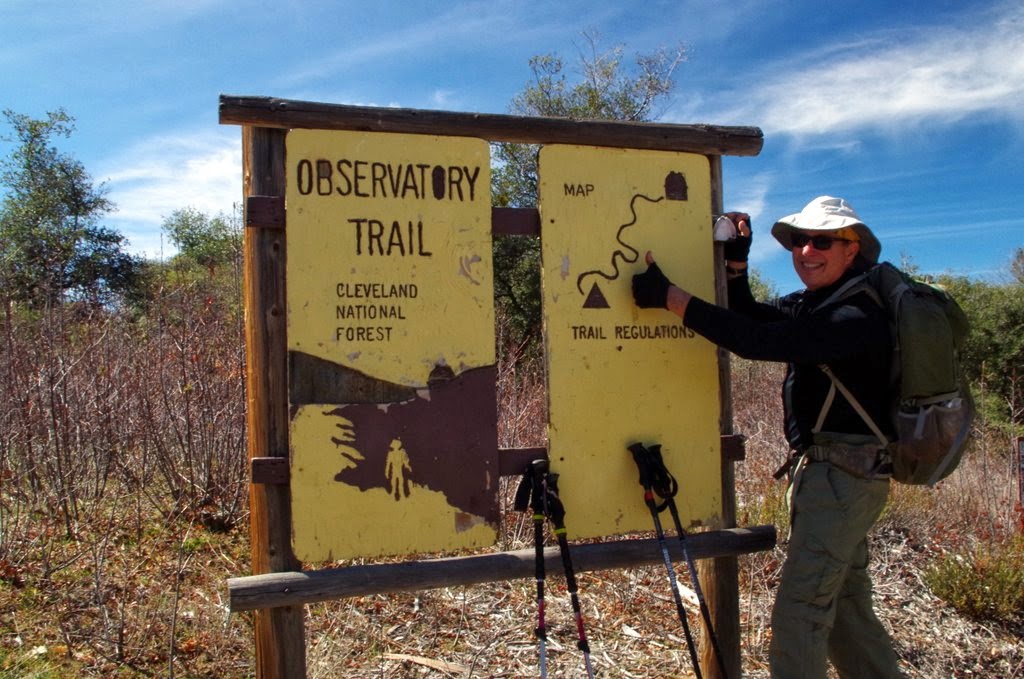 Everywhere we went in the Palomar area, we saw trees (both dead and alive) that had been peppered with holes drilled by the acorn woodpeckers, who had then stuffed the holes full of acorns: 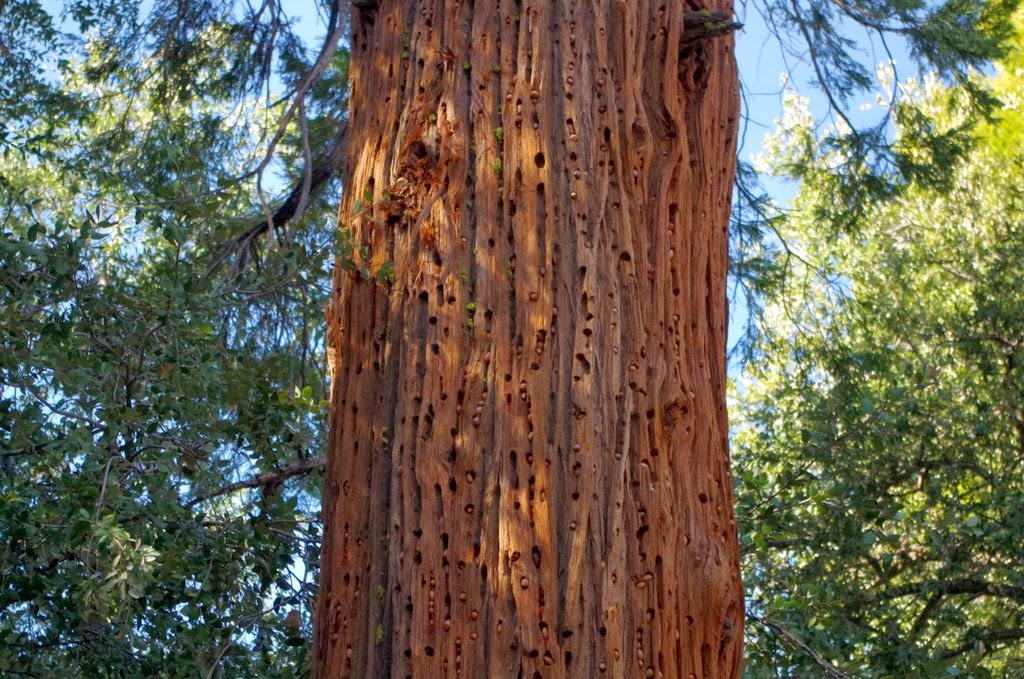 That night, we took a walk from the campground down to Doane Pond – the pond itself was covered in low fog, but the stars were very bright.  This is probably our last view of Orion until next winter: 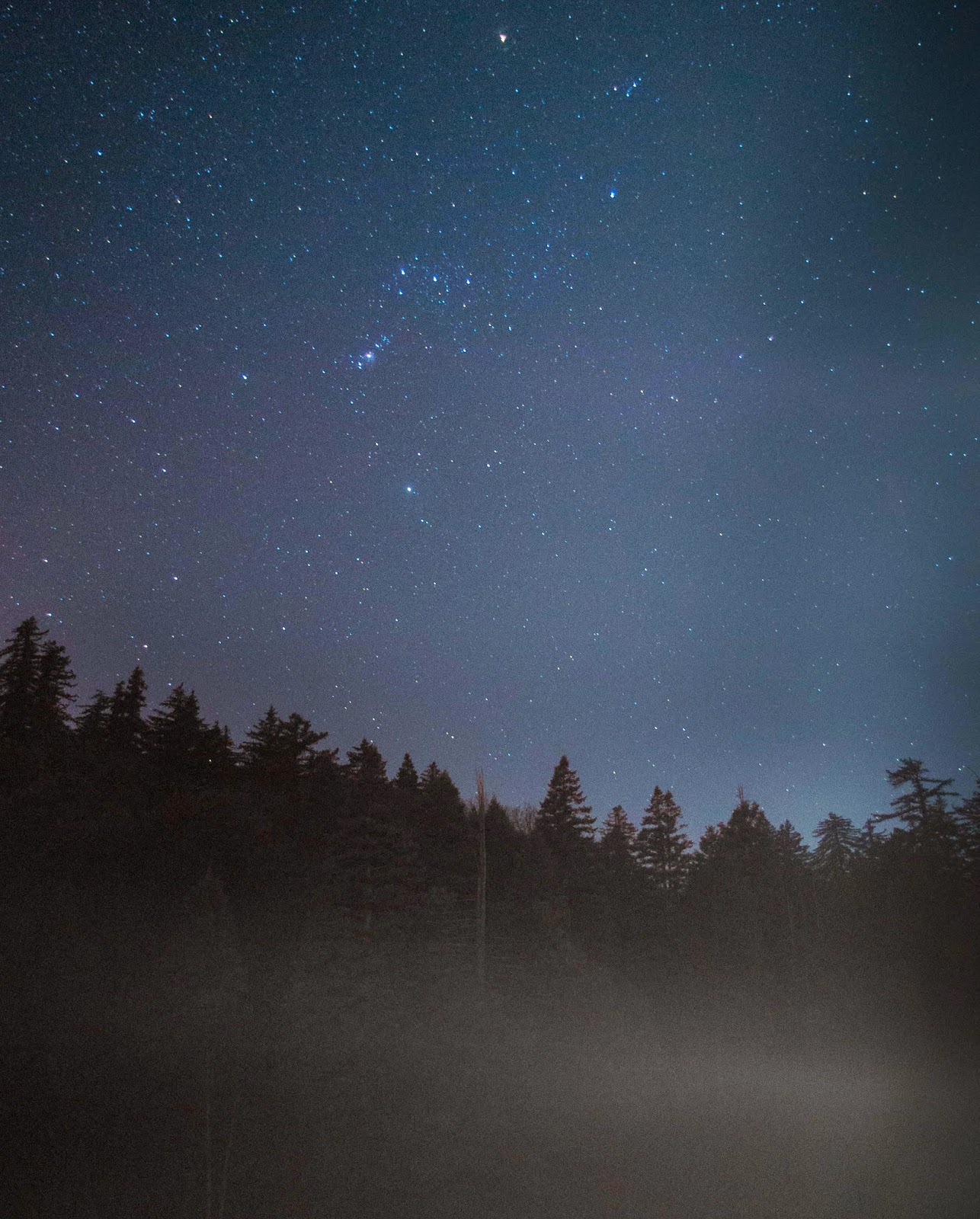 This is a slightly different view of the pond, with a little less fog: 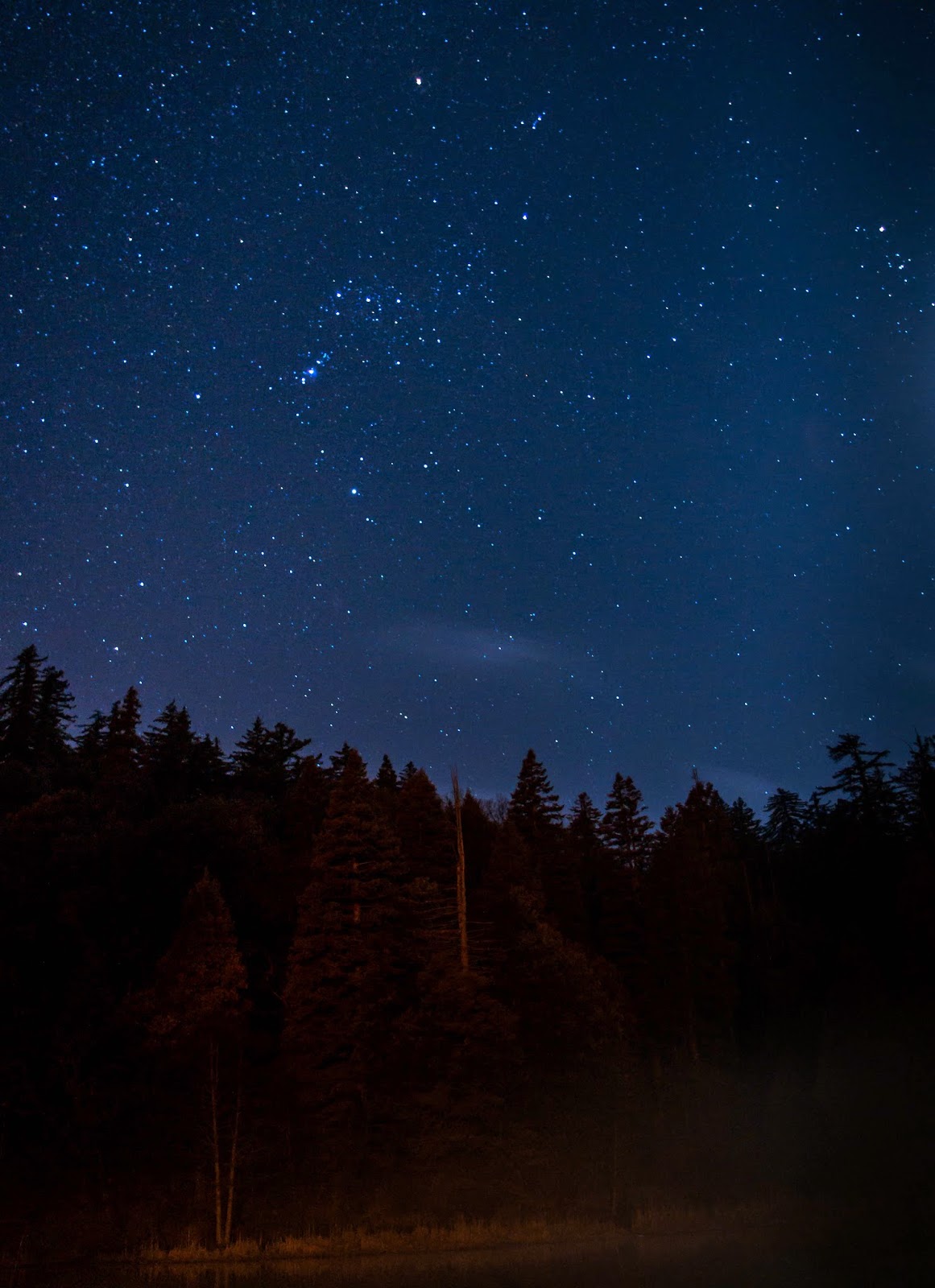 We drove to the Julian area (about an hour away) to take the Cedar Creek Falls hike.  Although it wasn't much more than 5 miles round-trip, it was pretty steep.  It was an "upside down" hike, losing about 1100 feet on the way down and gaining it in the hot afternoon on the way back up, with no shade.  It is hard to imagine doing this hike on a hot summer day.

The falls themselves were very nice.  By Southern California standards, they were terrific – in the Pacific Northwest, this would be a below-average waterfall: 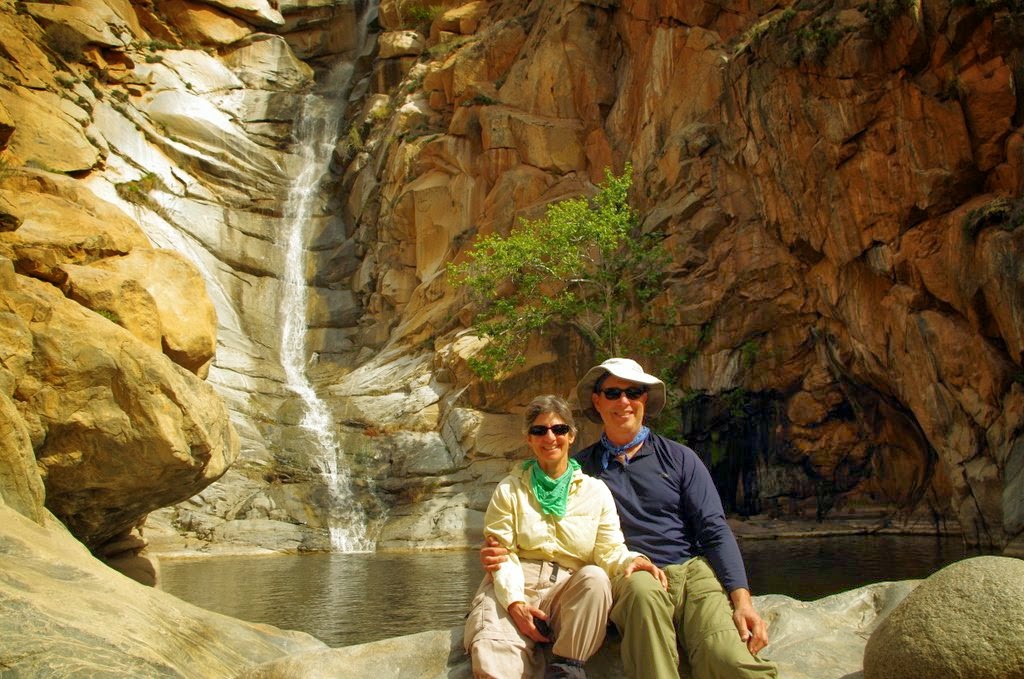 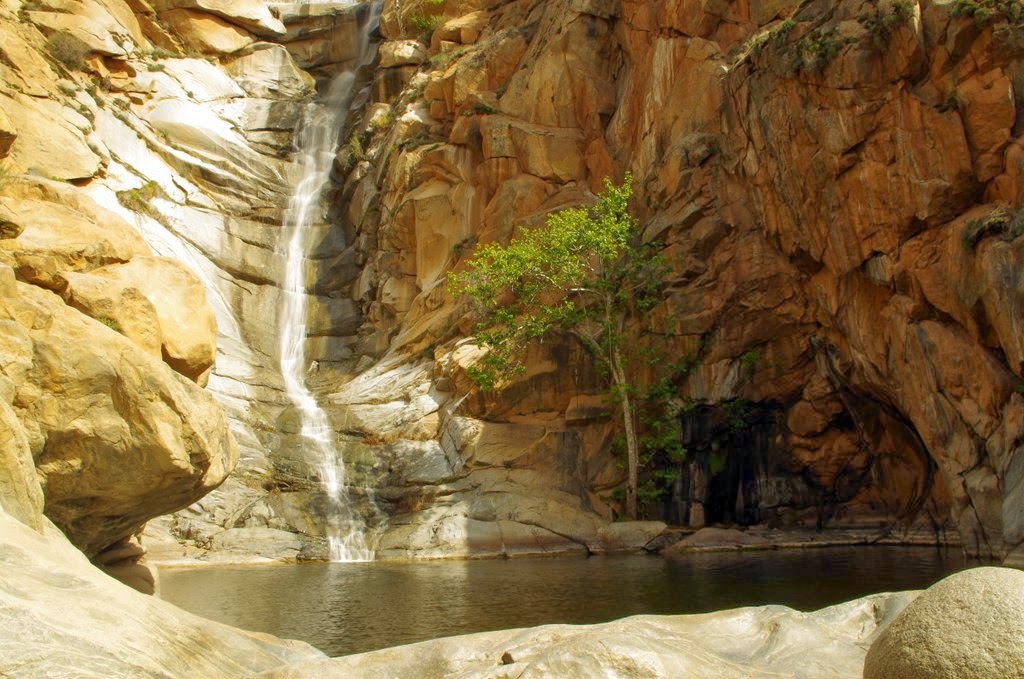 There was a good-sized pool at the base of the waterfall.  The water was cold – probably about 60 degrees, at most.  We changed into our bathing suits, swam to the waterfall and back, and got out immediately.  Even though this was a weekday, it was pretty crowded – there were about 15 other people. Anyone interested in taking this hike must plan ahead and get a permit -- the Forest Service limits access to 75 people a day.  Since everyone probably shows up around lunchtime, it must get really crowded on a warm weekend day.

When we got back to the trailer late on Friday afternoon, the campground had suddenly gotten very busy (not surprisingly), and it was pretty noisy.

Saturday, March 8:  Before driving home, I walked out to revisit the grove of ancient oaks in French Valley – these are the biggest oak trees we have ever seen.  They have to be several hundred years old -- I am sure that the Indians were grinding acorns that fell from these same trees.  This was the most impressive grouping of oaks: 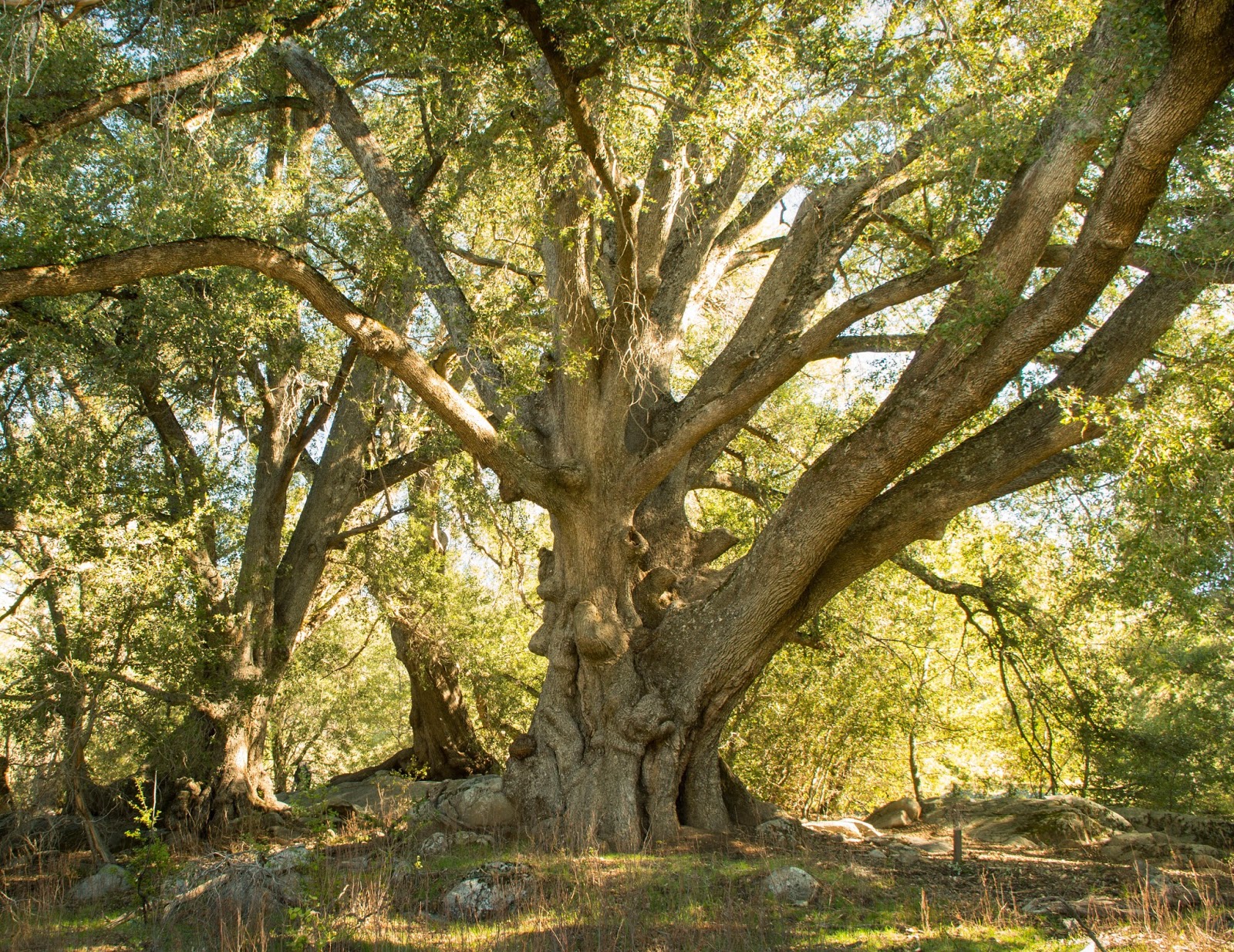 In this photo, notice my hiking poles (which are almost 5 feet long) on the left side of the trunk, just above my hat – this tree is close to 15 feet in diameter: 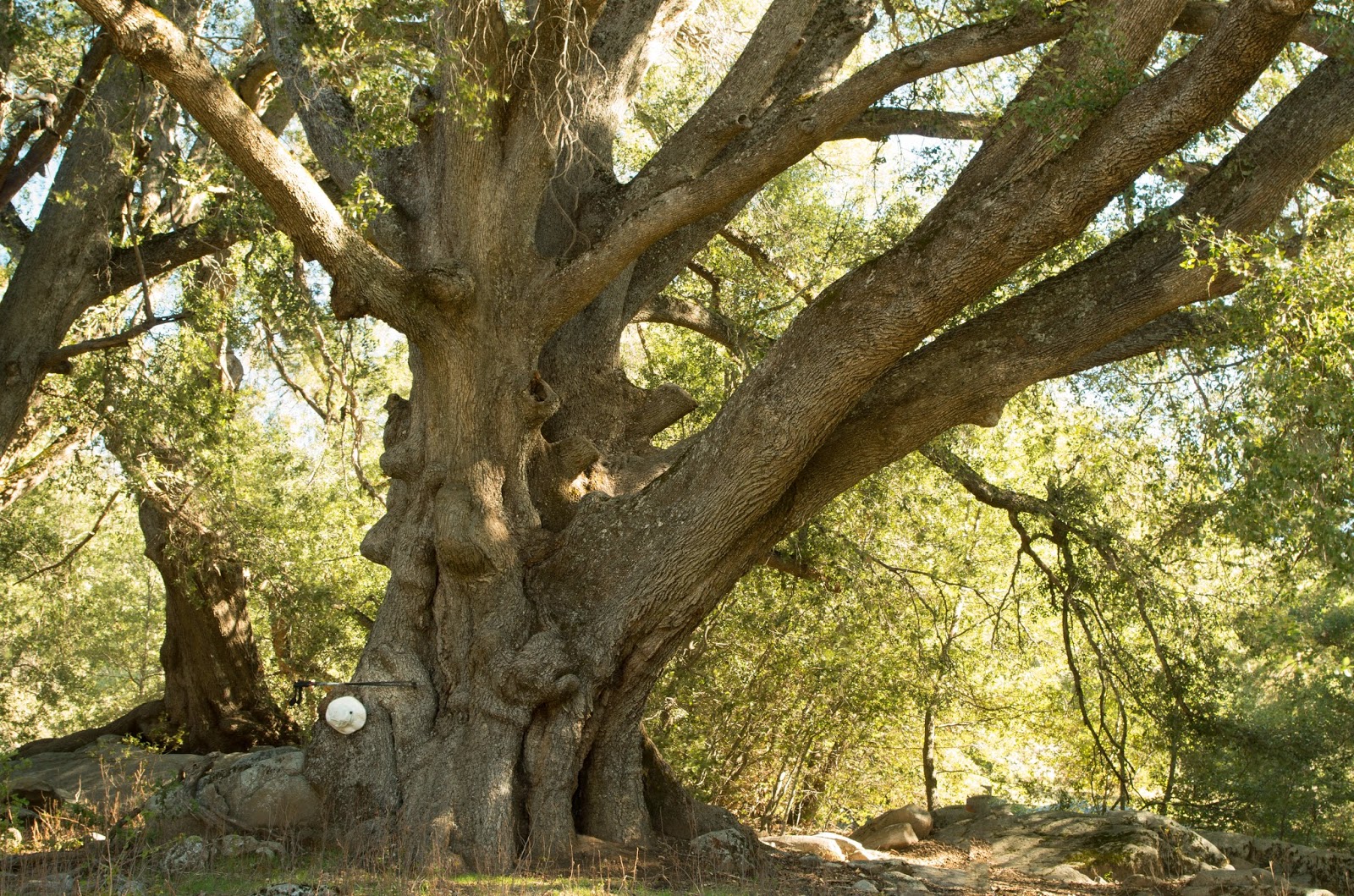 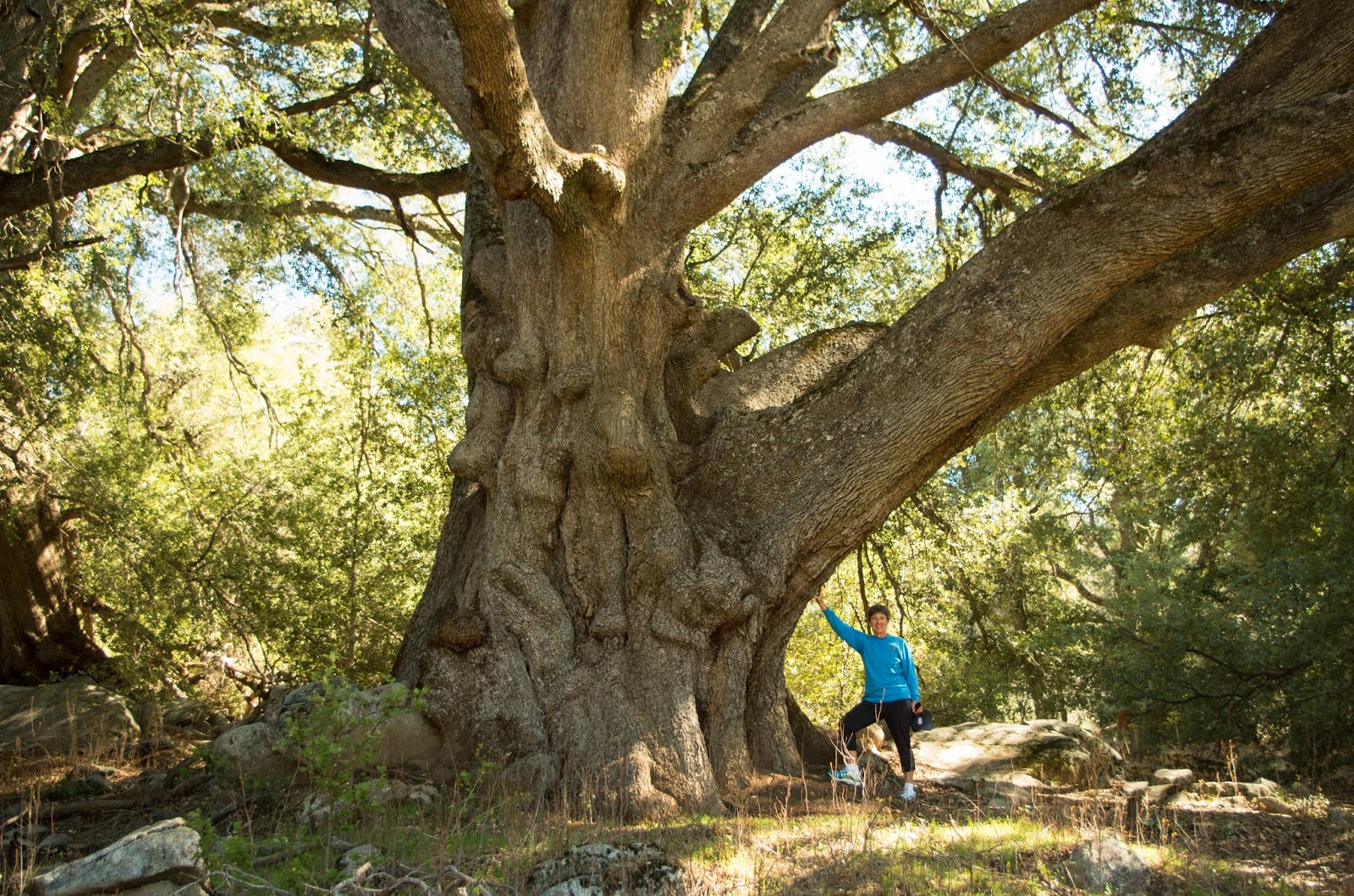 This is the obligatory "timer shot," in which I push the button and then scramble awkwardly to get into an ostentatiously relaxed position at the last second: 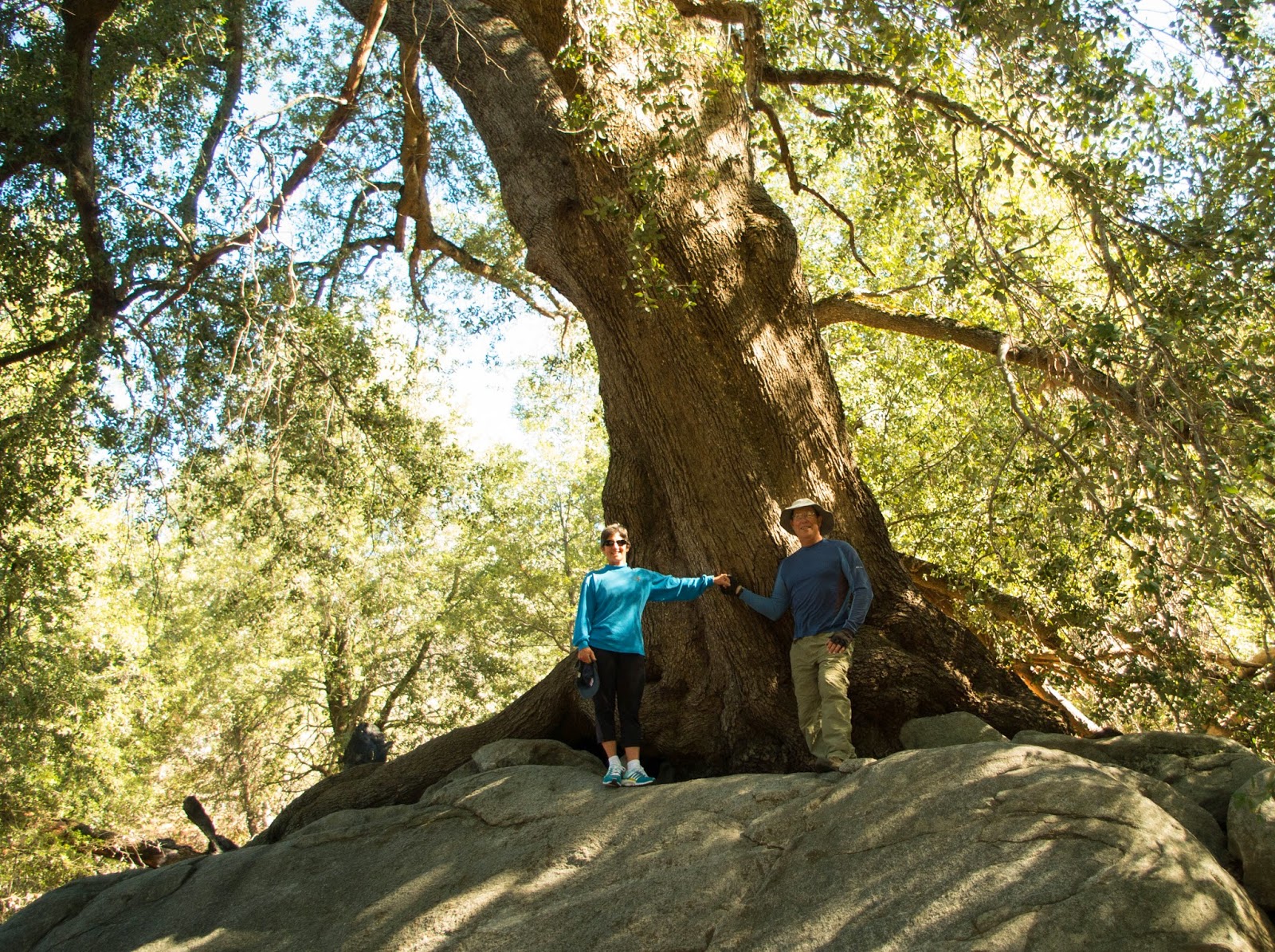 We left the campground around midday, and we were back home by midafternoon -- one of the shortest "commutes" ever!
Posted by Dan Schechter at 4:35 PM 2 comments: