Yosemite Valley in the Snow: January 2022

On a whim, we checked the reservations for Upper Pines Campground, which had been closed due to tree hazards following the big snowstorms of late December, 2021.  Surprise!  There was a site with several nights available during the third week of January -- perfect for another "socially distant" camping trip.  The weather forecast looked good, with temperatures in the 40s during the day and just below freezing at night.

January 23:  We arrived in the late afternoon.  Tunnel View was pretty icy, but the view of the valley was great: 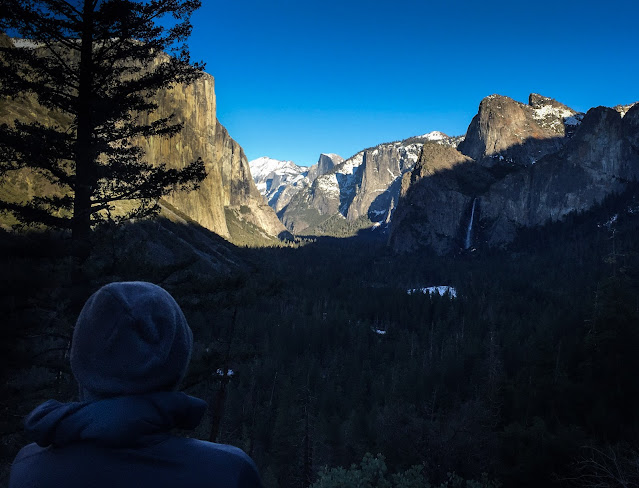 The Park Service website had warned that the campsites would be snowy and icy, so we came prepared.  Felice did the shoveling, and I took pictures: 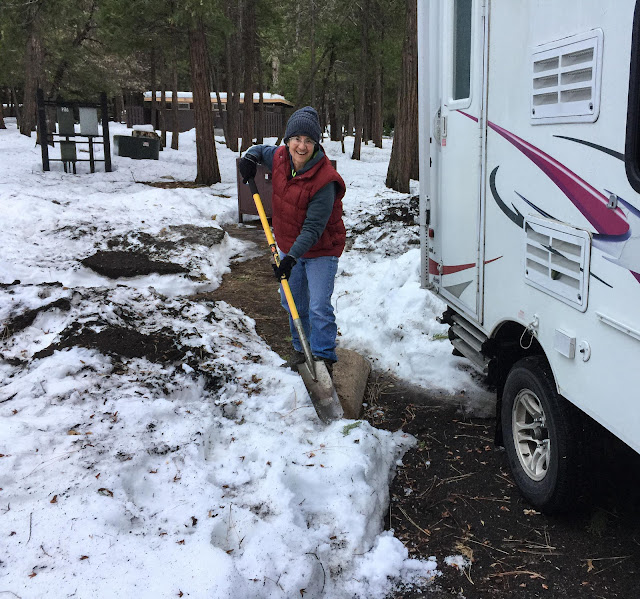 The ice in the campground was no joke -- thick and slick.  During the week, Felice slipped a couple of times, even though she was on high alert and was wearing great boots and using trekking poles.  Snow camping is fun for a while, but we would not want to live in a really snowy climate.

January 24:  We headed off to the Yosemite Falls area.  Astonishingly, there was a bobcat (not a mountain lion) in a meadow near the parking area.  He ignored us while he stood over a hole with his right front paw raised, ready to pounce: 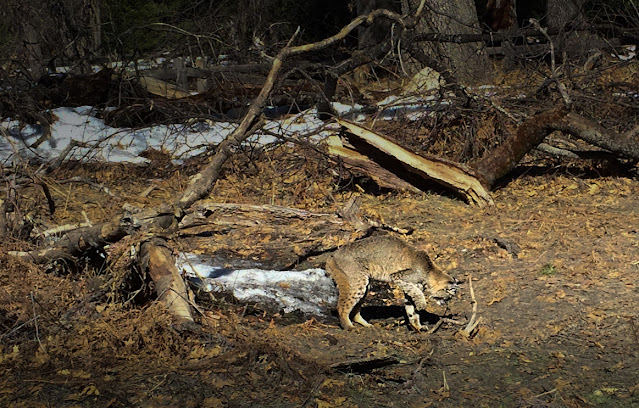 This was taken with a zoom lens from around a hundred feet away: 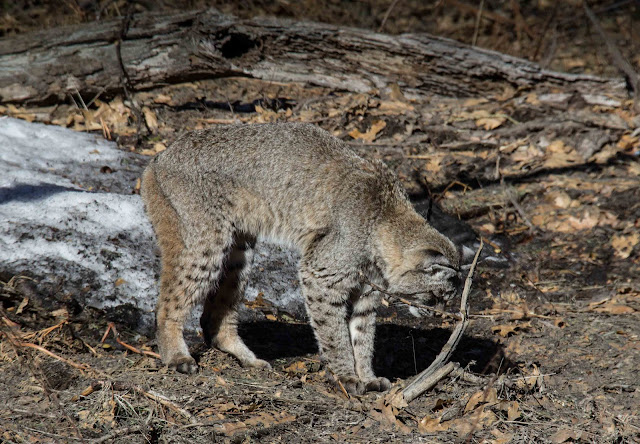 The falls were flowing as if it were May, rather than January -- a combination of the heavy December snow and a warm, dry January: 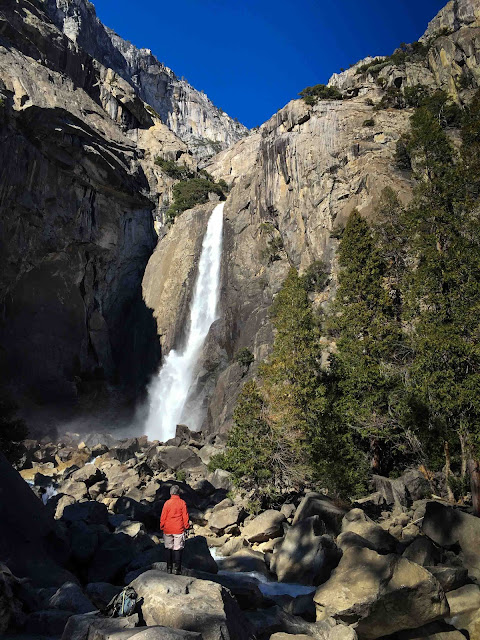 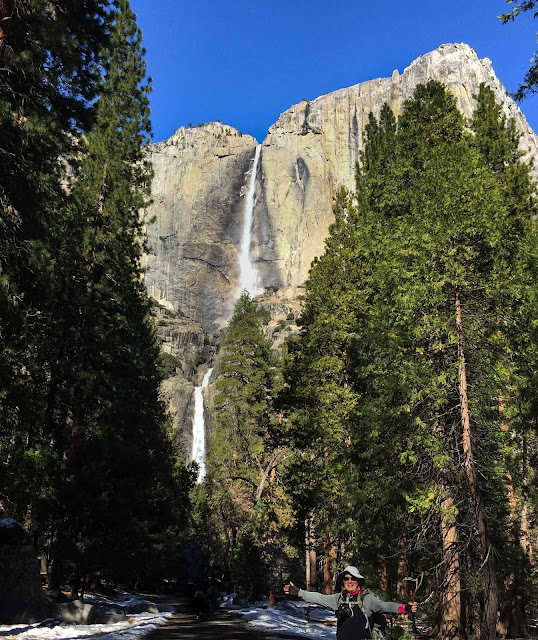 Later in the afternoon, we headed up the trail toward Columbia Point.  Half Dome peeked through the oak trees: 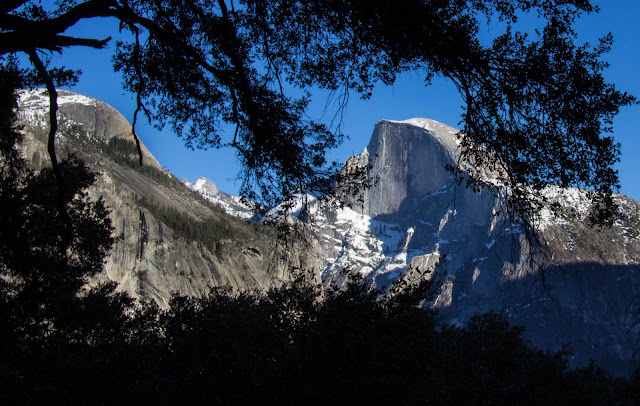 That evening, as we headed back to the trailer, Felice captured the reflection of Half Dome in the Merced River on her iPhone: 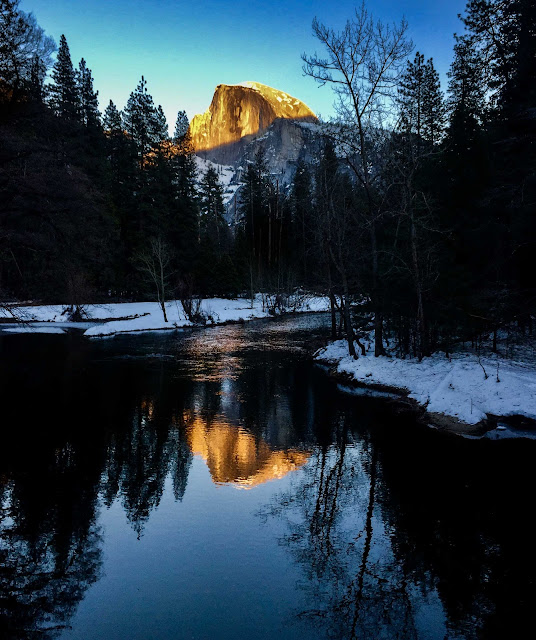 As promised by NOAA, the weather was just perfect all week long -- cool, clear and crisp during the day (just right for hiking), and cold at night -- just right for hot chocolate (spiked with a little Bailey's and rum).  The campground was very quiet; the trailer was dark, silent, and cold.  (Each morning, the temperature within the trailer was around 40 degrees.)  Every night, we got about nine hours of sleep, far more than we ever get at home.  That meant that we always got a late start on our daily activities, but so what?

January 25:  We went skiing at Badger Pass.  The snow cover was getting a little thin in places, but we enjoyed the empty runs: 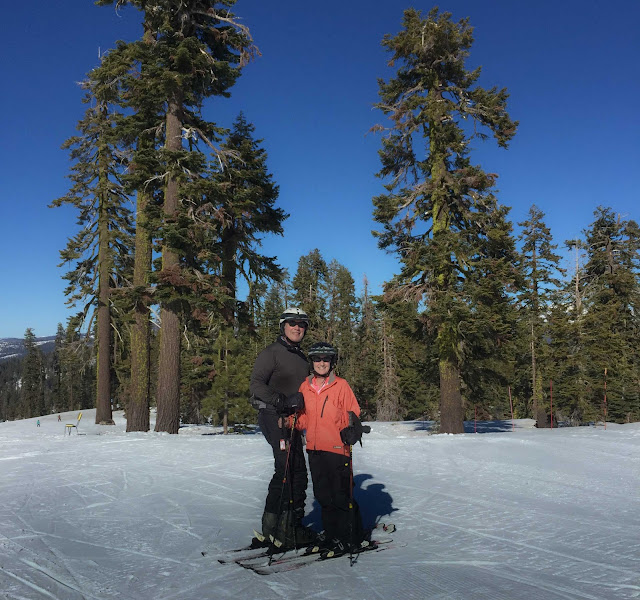 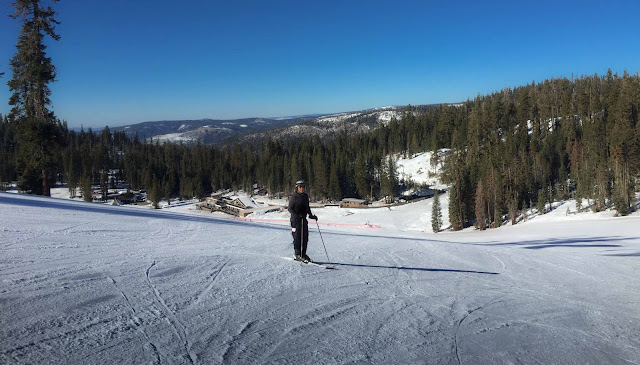 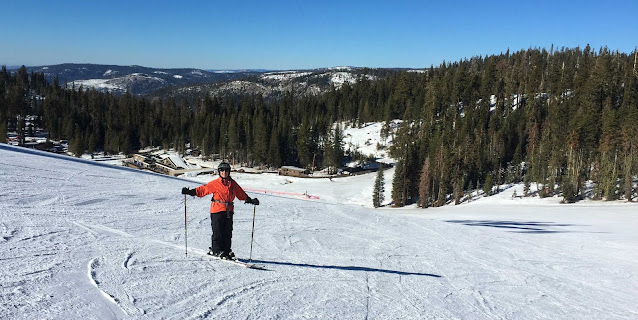 January 26:  A party of Steller's jays (that's actually the correct word for a small flock of jays) greeted us in the morning.  Here's the full party in a nearby tree: 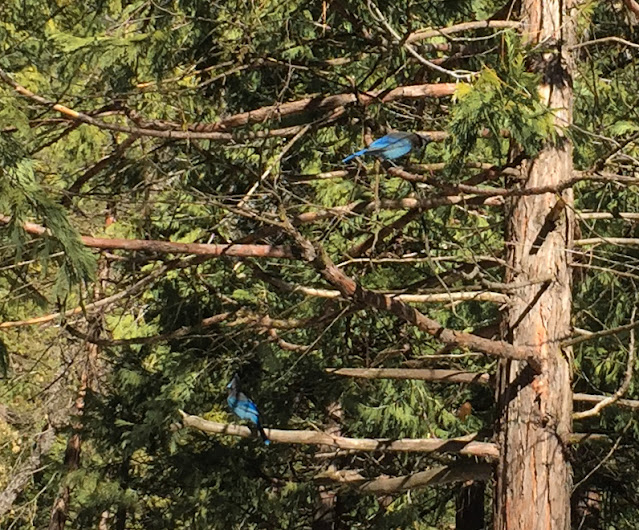 A few of them posed on the ground, hoping (in vain) for a handout.  This was their real color -- an intense peacock blue.  It seemed much lighter than their typical dark summer plumage, but I could not find any source documenting a seasonal change in color: 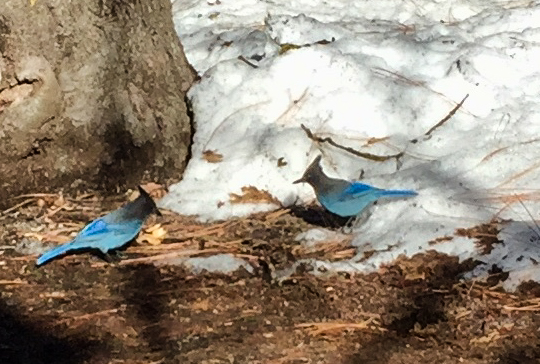 When the party broke up, we headed up toward the base of Upper Yosemite Falls.  Of course, Half Dome loomed in the middle distance: 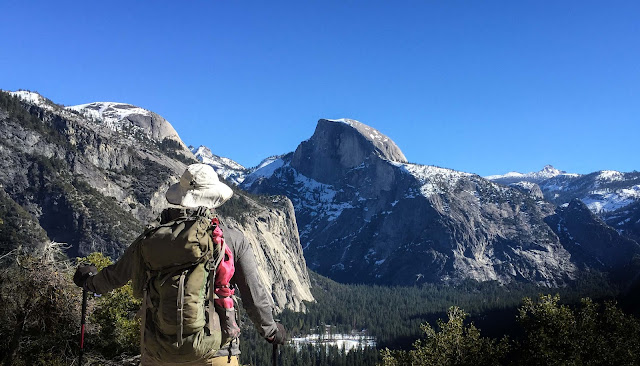 This is the stunning first view of the base of the falls, as the trail comes around a corner: 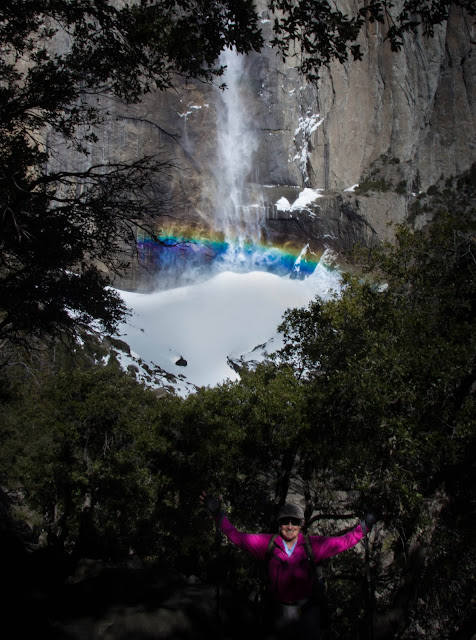 Because the air during the night was below freezing, some of the spray would freeze as it fell, forming a huge inverted "snow cone" at the base.  But there was enough liquid water to create an intense rainbow across the face of the cliff: 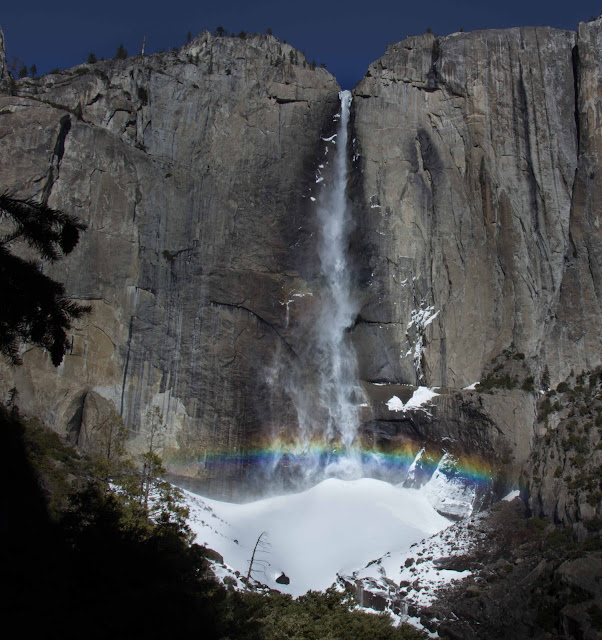 The frozen spray swirled around the top of the snow cone -- this picture might be worth clicking on -- just hit escape to get back to the blog: 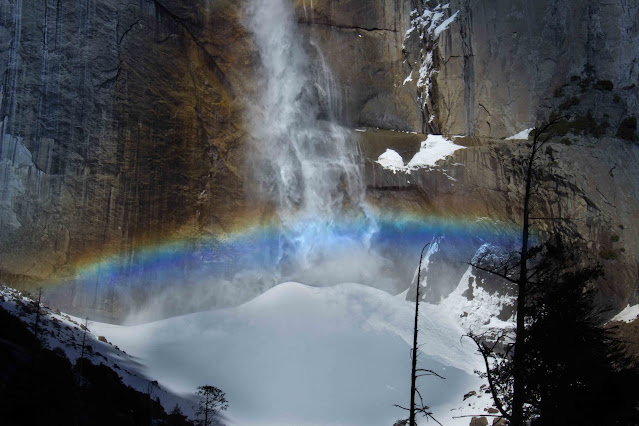 Late that evening, we drove back to the area near the base of the falls, looking for a shot of Orion and the Milky Way rising over the Glacier Point area.  The sheer cliffs rise about two thousand feet from the south side of the valley floor to Glacier Point, which is on the left of this picture.  The glacially-polished cliff is reflecting the light of the skating rink at Curry Village.  I think Taft Point is on the right side of the photo, with Sentinel Dome in the middle.  There was still a lot of snow at the higher elevations: 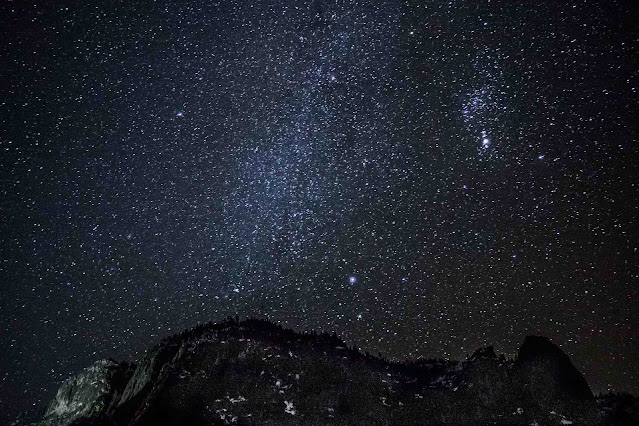 Sirius (in the center) was so bright that it slightly "burned" the time exposure, which is why it looks like a small disk and not a point.  Orion is in the upper right corner.  Paradoxically, the Milky Way in the background makes it difficult to see Betelgeuse and Rigel, which are usually easy to see in a light-polluted sky.  The Orion Nebula is clearly visible.

January 27:  We took the Vernal Falls trail but soon ran into thick ice.  Even with microspikes, it was too difficult (and dangerous) to continue.  The streams were full: 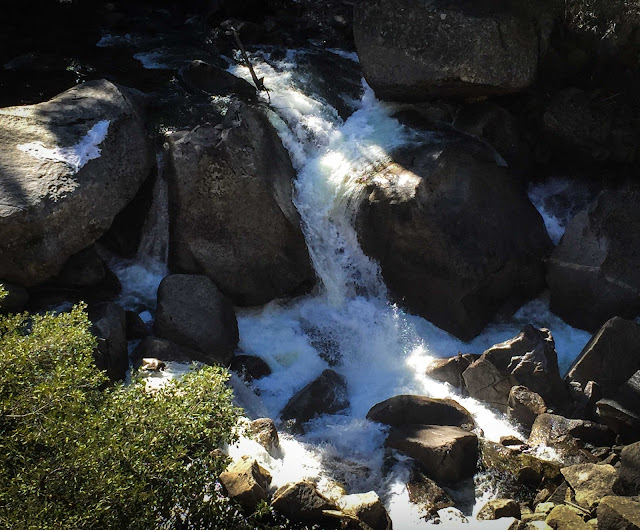 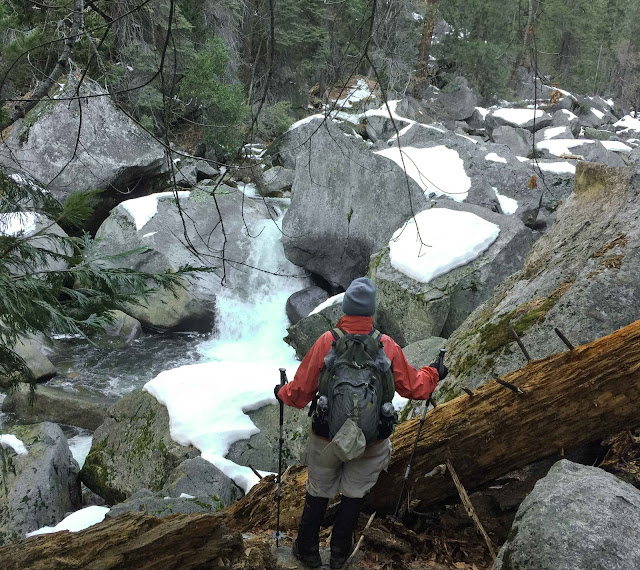 This is a zoom shot of Vernal Falls: 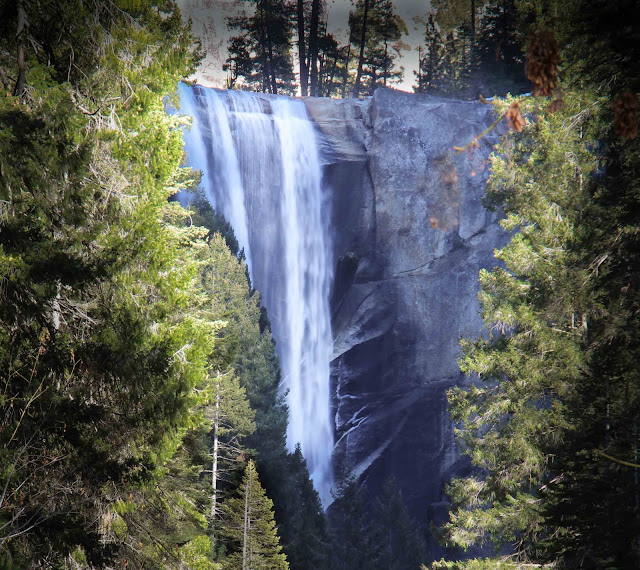 From the trail above Happy Isles, we could see Upper Yosemite Falls across the valley.  The cliff face in the lower left is the bottom of the Glacier Point wall: 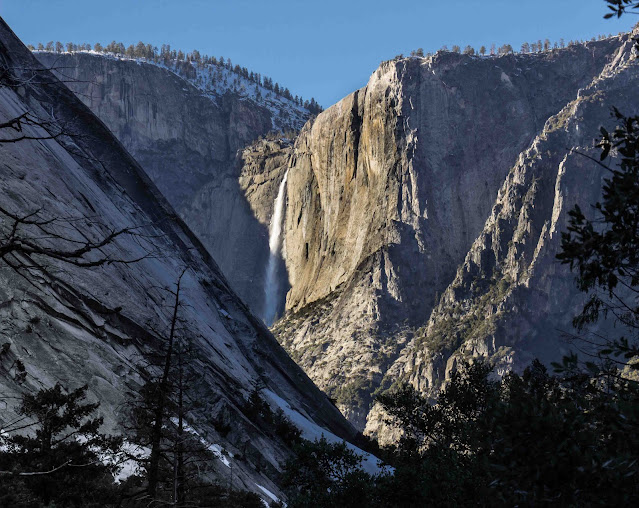 January 28:  We headed home, which took about eight hours.