After a hot and dry year in California, we were looking for a cool, moist hiking trip:  hurrah for Washington!  We left home on August 31 and made it to Coleville, California, more than 400 miles north on Highway 395.  The next morning, Felice went out for a brisk walk.  I decided to jog slowly next to her, something I almost never do.  Bad idea:  later that morning, I developed plantar fasciitis, an inflammation of the sole of my right foot.  At noon, I could hardly walk.  It would last through a whole month of hiking.  It didn’t ruin the trip, but it limited the distances we could cover.

On September 1, we reached Chemult, Oregon, and we almost turned around and went home because I could not walk.  But we kept going anyway, hoping for the best.  On September 2, we made it to Olympia, and on September 3, we camped at Goodell Creek Campground in Newhalem, off of Highway 20 in the North Cascades.  The campsite was located right at the confluence of Goodell Creek and the Skagit River.  The foliage was extravagantly lush, as it was throughout our trip: 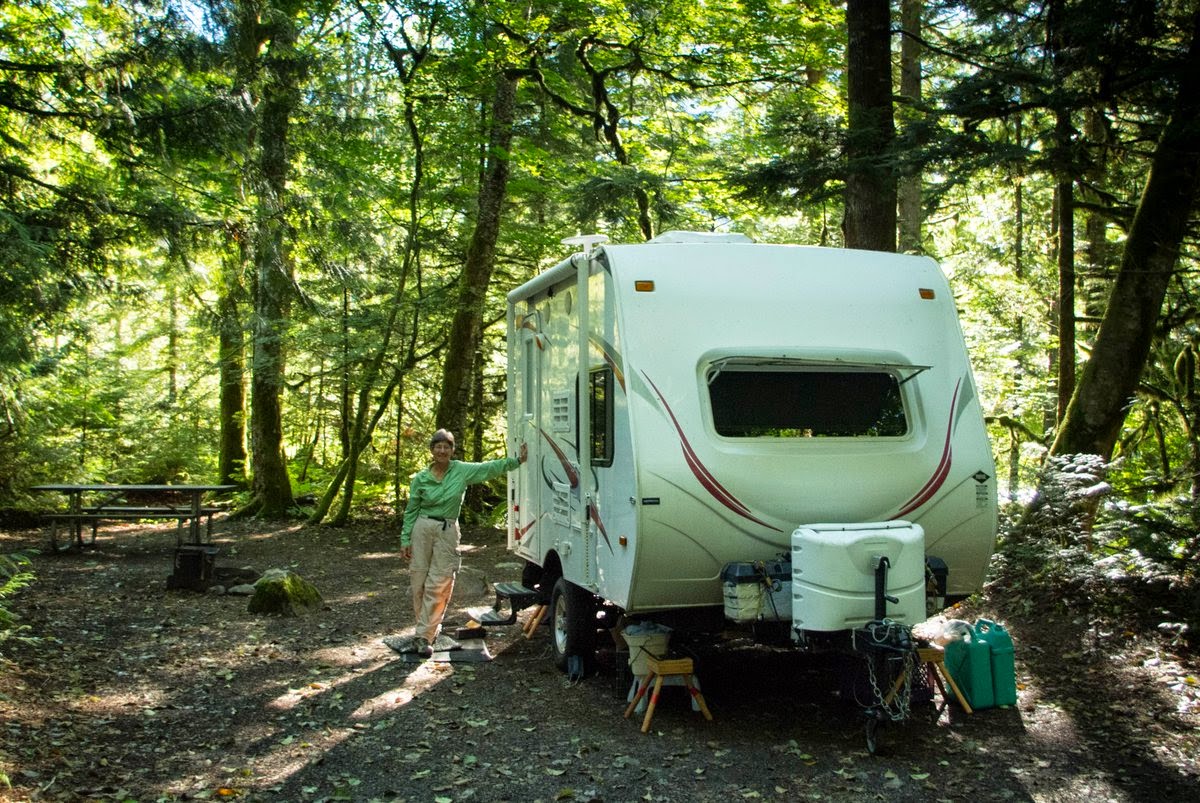 Felice soaked up the delightful sound of the flowing water: 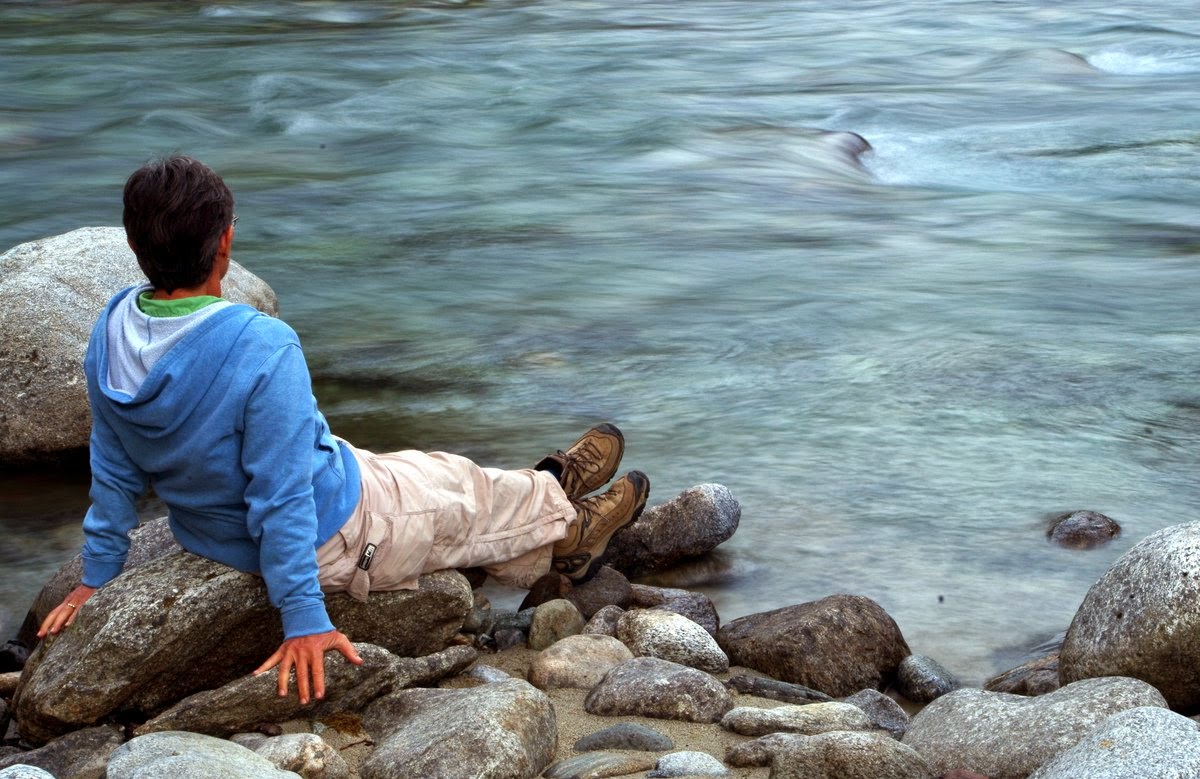 September 4:  We hiked the Thunder Creek trail, which was very easy.  I limped along, favoring my foot, just to see if I could hike.  To my surprise and pleasure, I was able to walk for a few hours, albeit at a slower pace than normal.  The vine maples were just starting to turn color: 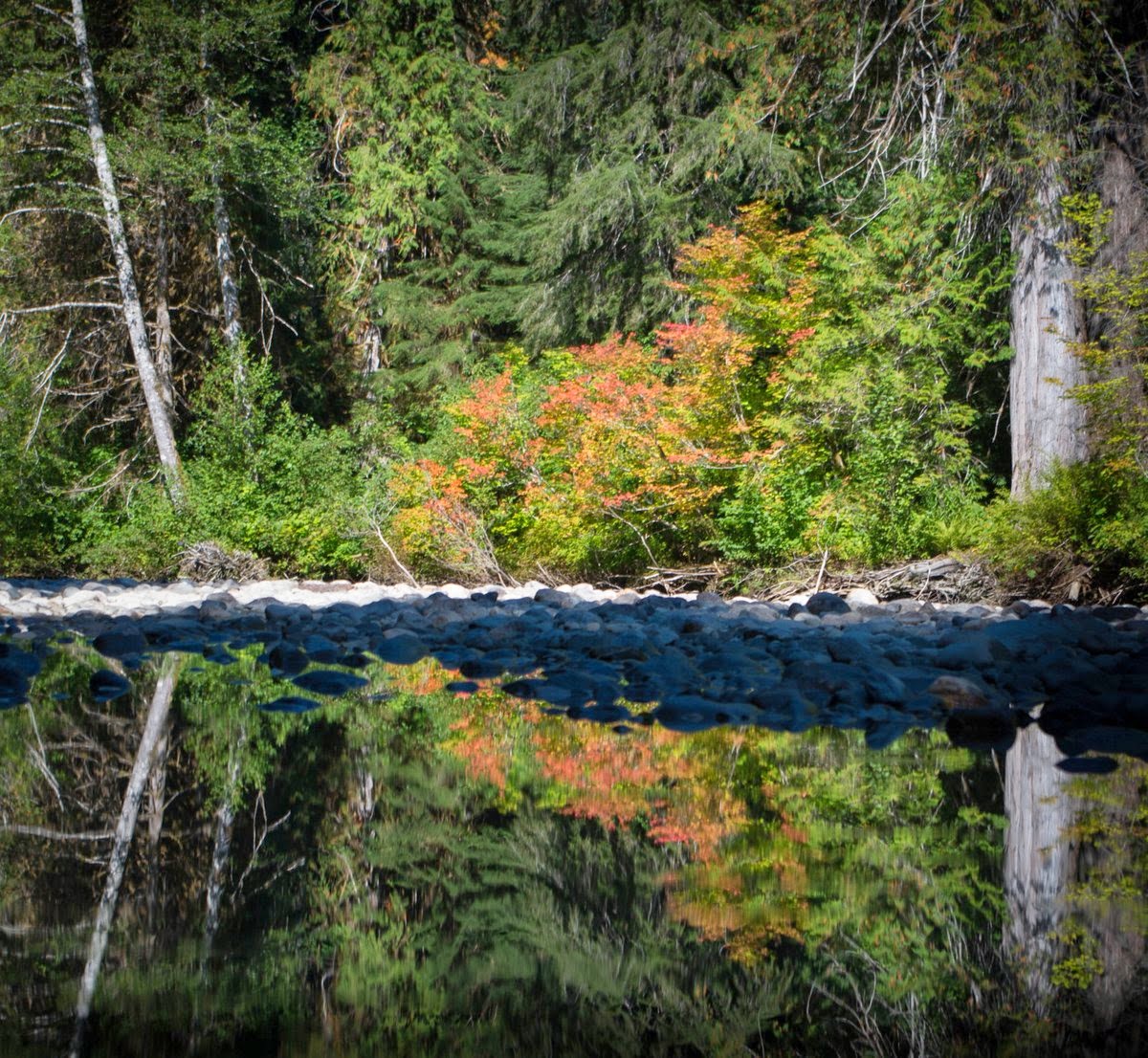 That afternoon, back at the campsite, we convened our traditional post-hike “snacking circle” and hung out in the shade near the water: 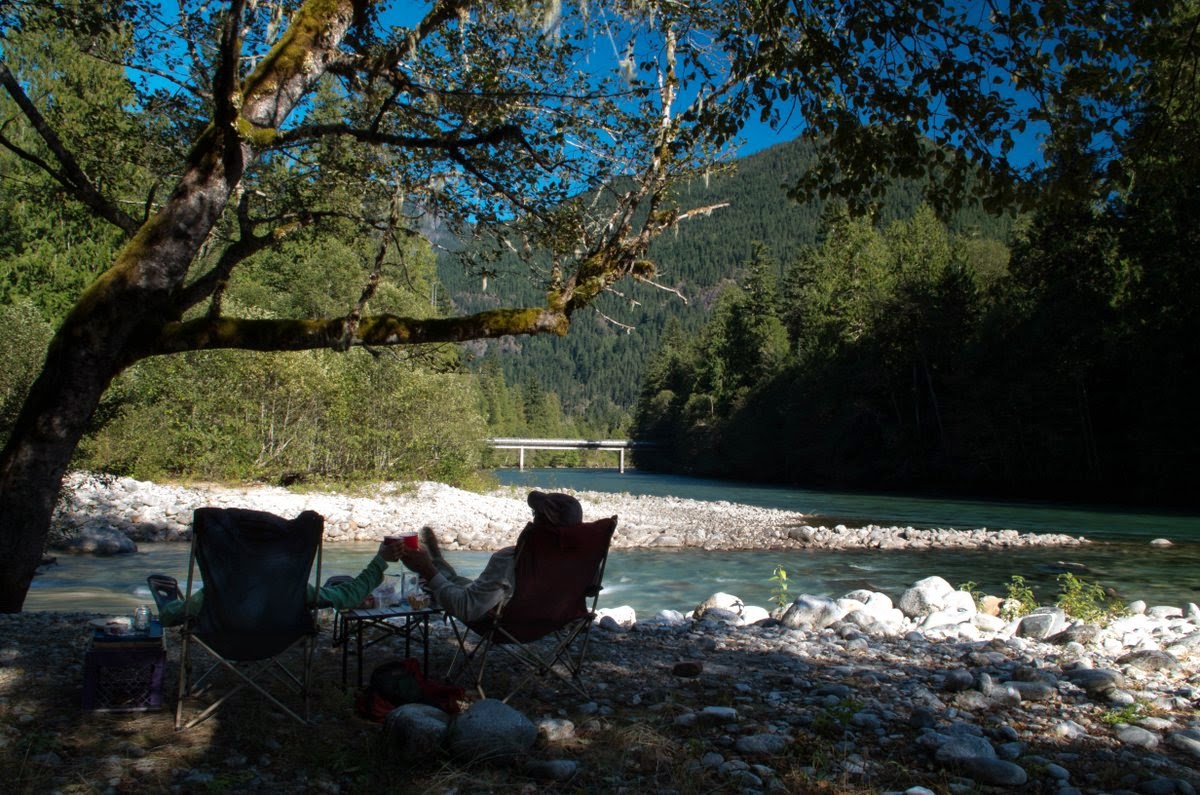 September 5:  We embarked on the Cascade Pass hike in the Marblemount area, a somewhat ambitious route under the circumstances.  But it was such a beautiful day that we could not resist the temptation to give it a try.  On the way up, we were entertained by the rumbling of the glaciers on Johannesburg Mountain, just across a narrow valley from the trail: 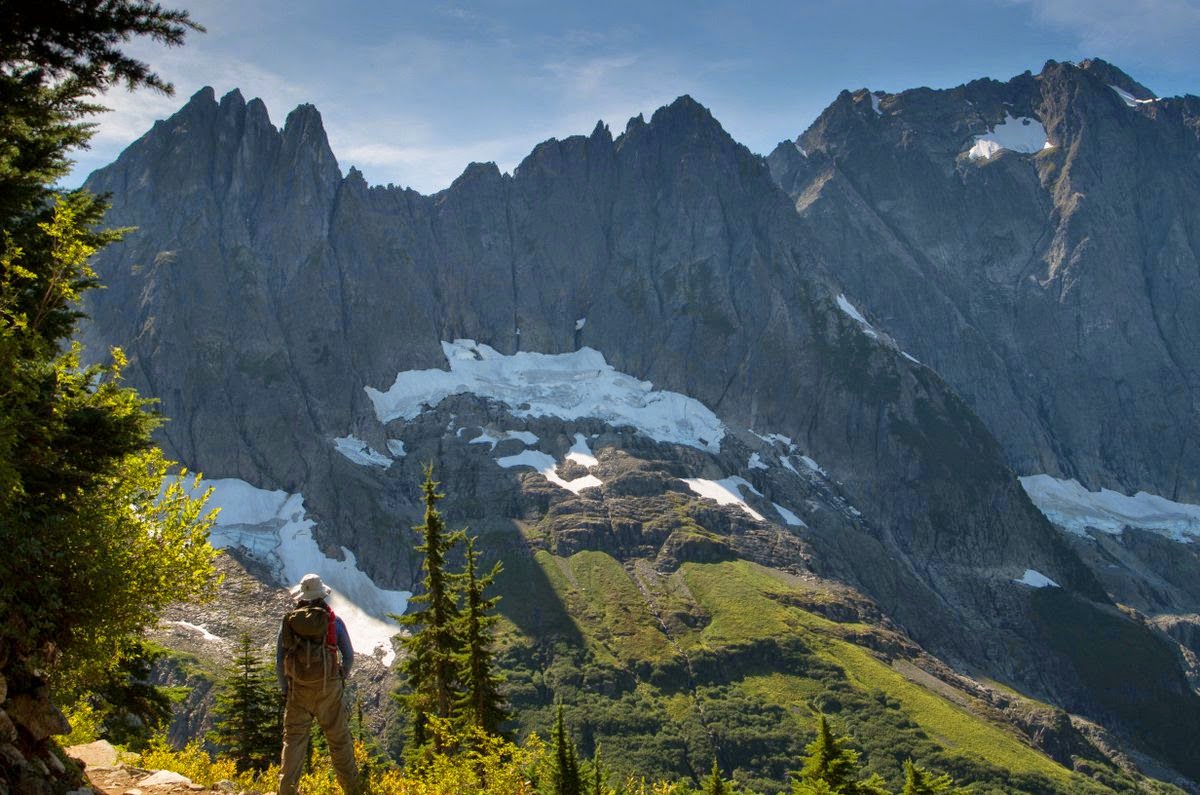 Felice zoomed in on one of the glaciers: 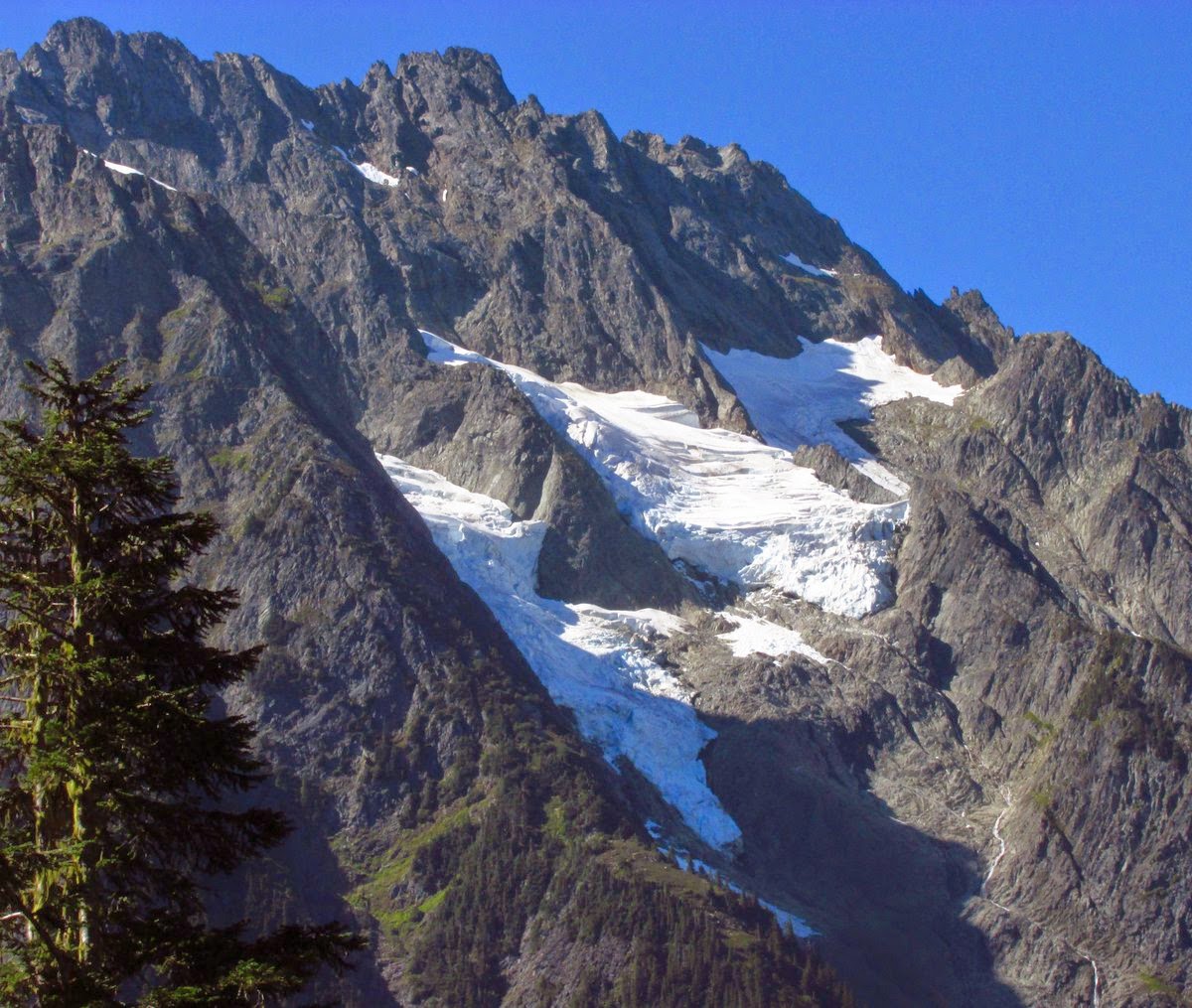 To our north was (I think) Eldorado Glacier and the Boston Basin area -- the trail across the talus slope looks trickier than it was: 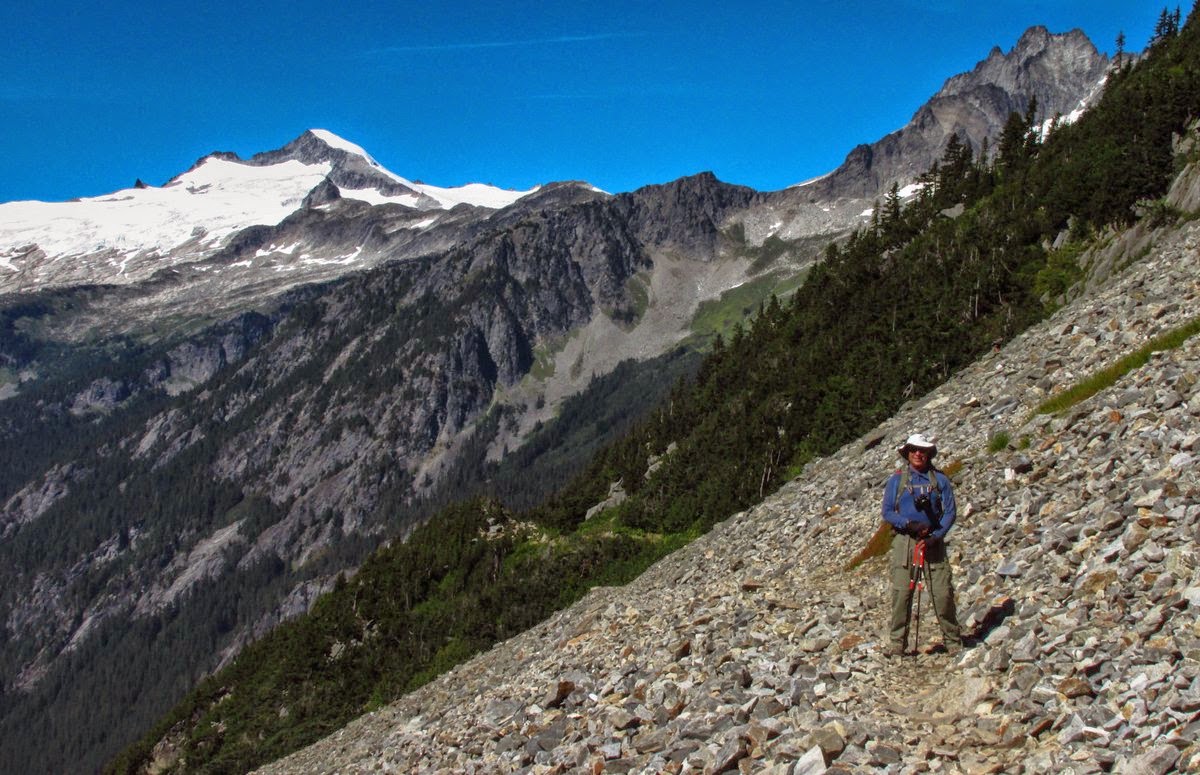 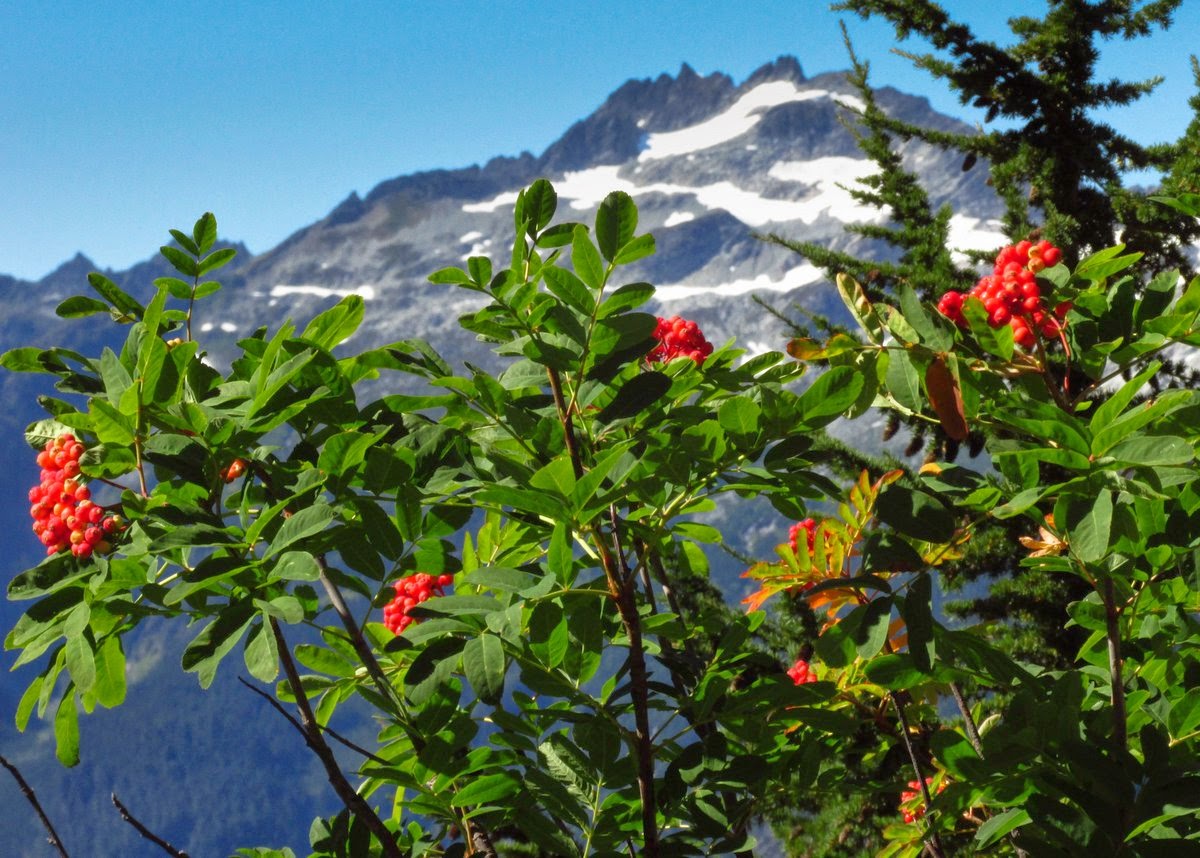 We made it to the Pass, with great views of the Cascades -- this is Felice’s patented “boot shot:” 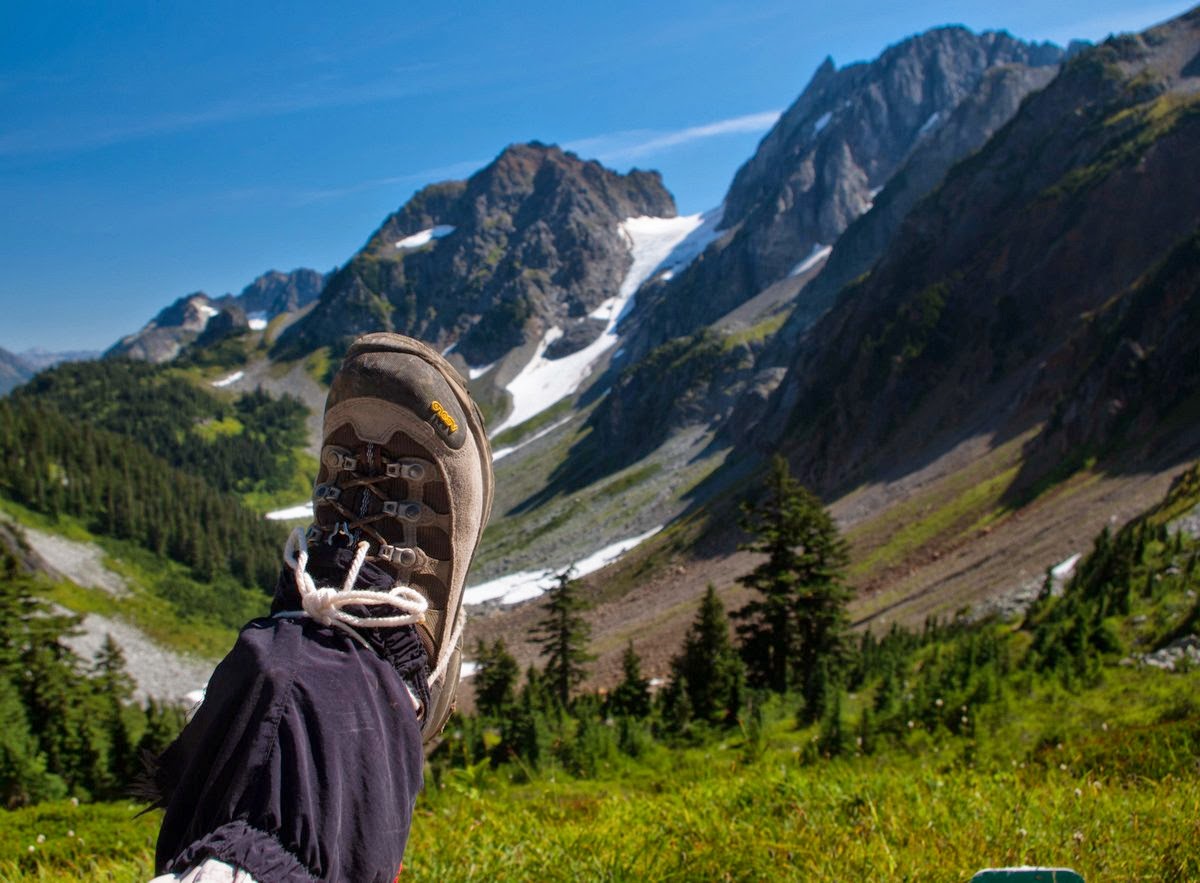 This is a brief video panorama:


If my foot had been in better shape, we would have gone another tough mile up the Sahale Arm -- but discretion prevailed, unfortunately.  On the way back down, we ran into an uncharacteristically brave marmot: 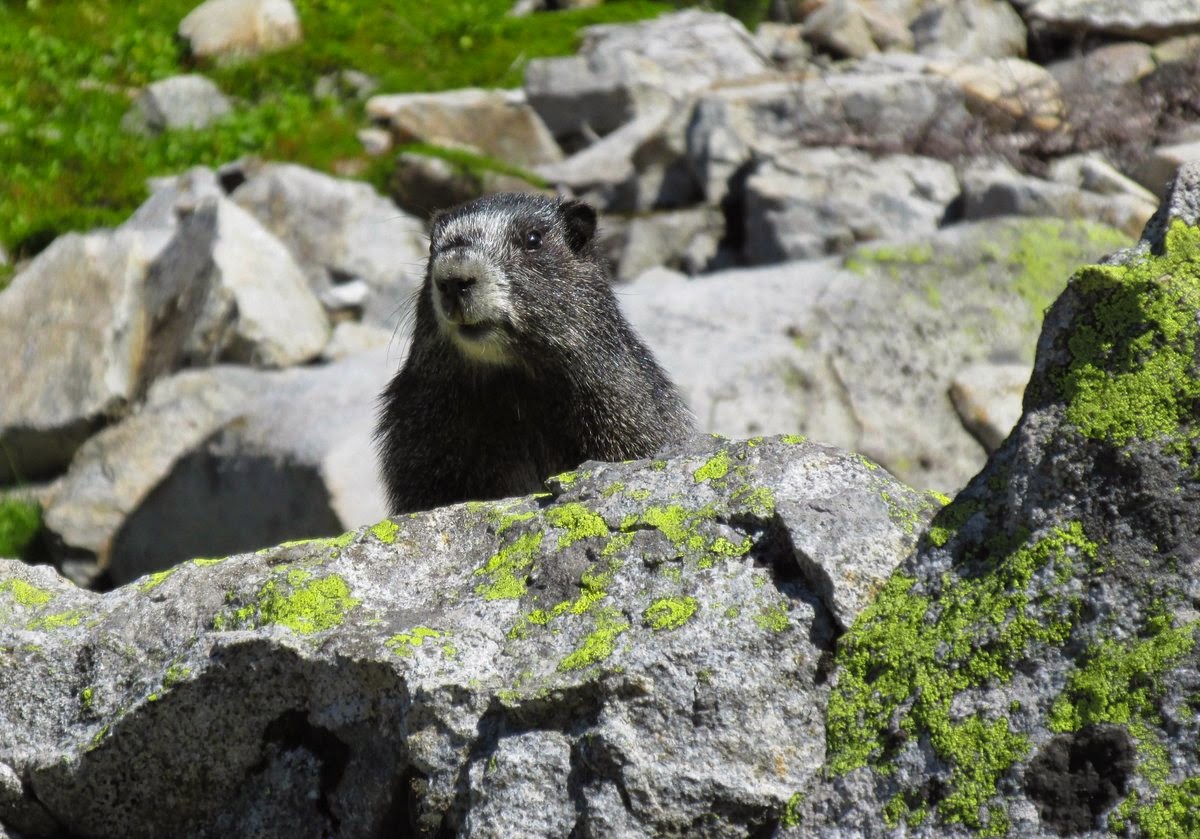 September 6:  In the morning, after hitching up the trailer, we had a little problem -- as we crossed a one-lane bridge over the Skagit River (at very low speed), the trailer came off the hitch ball, and the tongue jack skidded along the pavement for a moment.  We hopped out, completely blocking traffic: there was no other way in or out of the National Park Visitor Center!  The other campers and the rangers immediately came to help us.  I jacked up the trailer, we put it on the hitch ball, and slowly drove off the bridge.  Thankfully, there was no significant damage, except to the sway bar (which we later replaced in Bellingham) and to the tongue jack (which I fixed when we got home a month later).

Anyway, we soon headed off to Lone Fir campground, just east of Rainy Pass on Highway 20, and found a campsite right on the creek.  The forest in the Eastern Cascades was much drier than the west side, not surprisingly.

September 7:  We took the Maple Pass hike; but instead of doing a loop (with the steepest part on the descent), we decided to do it as an “out and back,” especially since the best views were on the first two-thirds of the loop.  This was a long hike  (more than nine miles) with more than 2000 feet of elevation gain.  We took it slowly, and my foot was able to do the job adequately.  It was another in a long series of “bluebird” days -- clear skies, cool temperatures, and light winds.

The trail contoured around a huge cirque above Lake Ann: 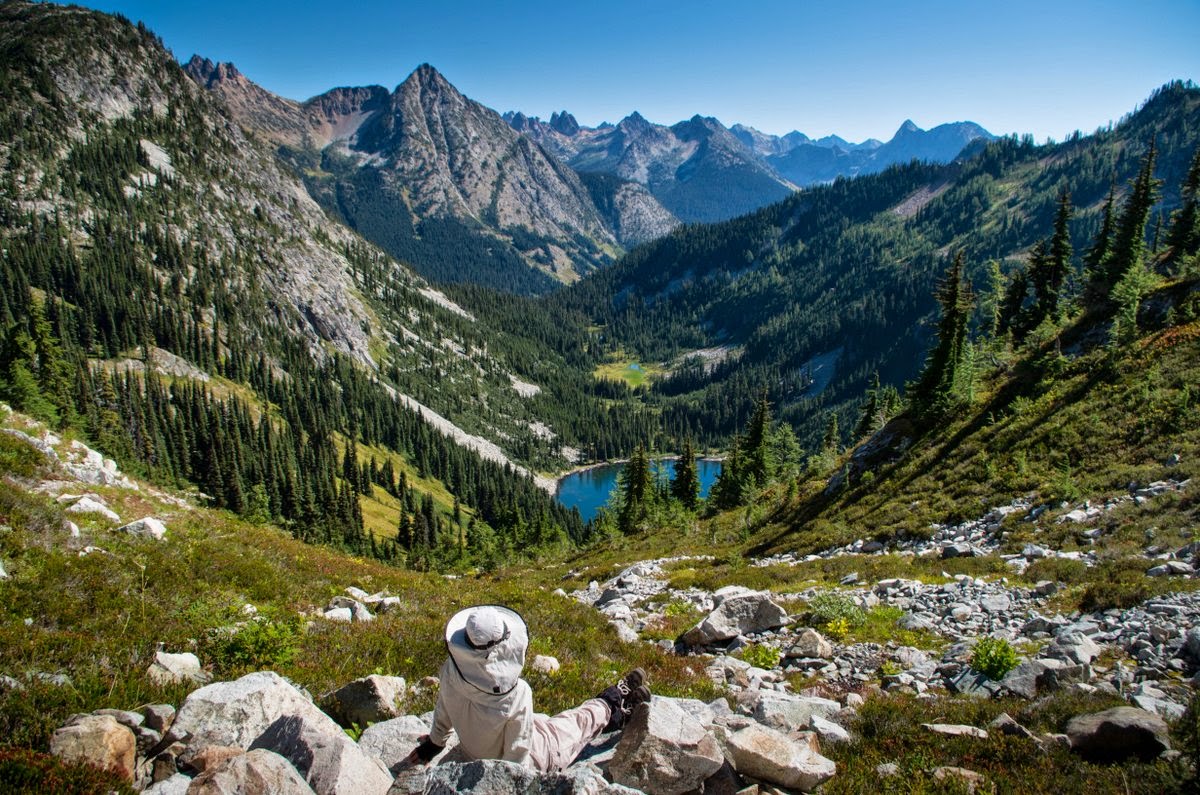 Although we had missed most of the summertime flowers, the foliage had started to show some fall color: 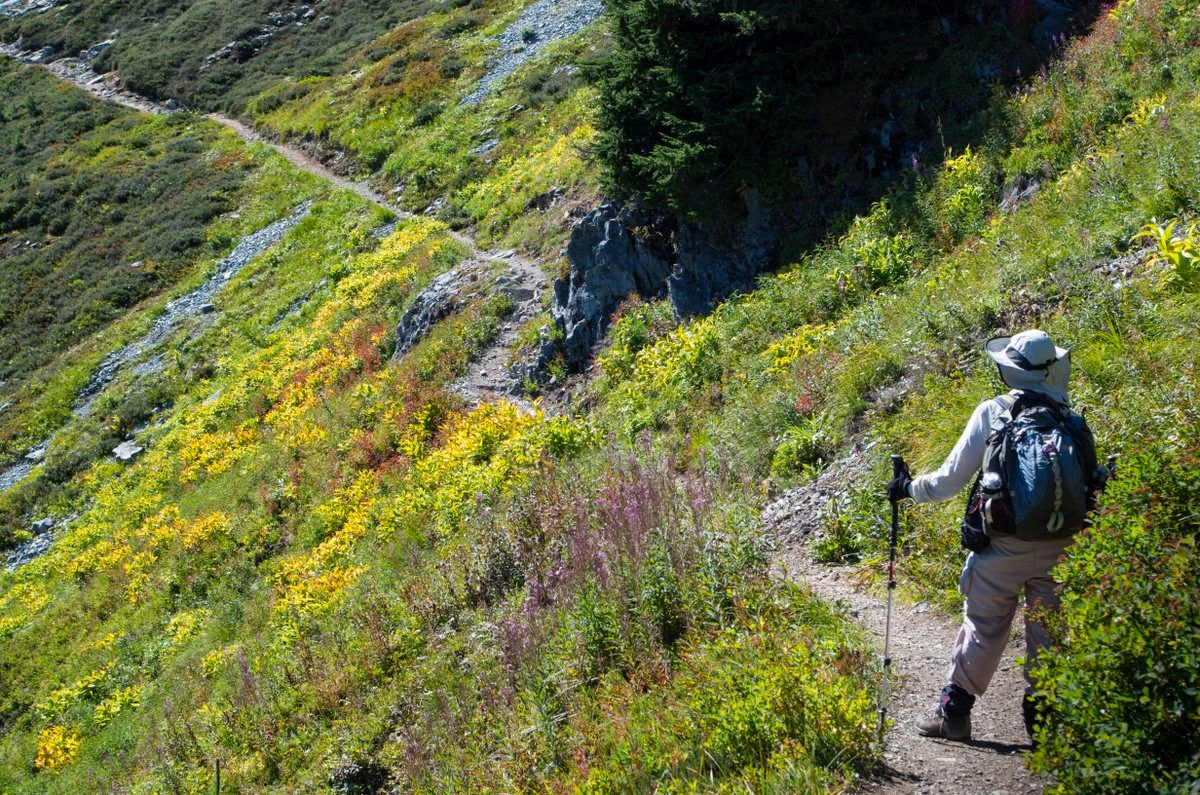 We spent a long time at the top of the pass -- the Cascade summits stretched out to the south like a sea of whitecaps.  We were struck by the chaotic geology of the mountains in this entire area -- unlike the Sierra or the Rockies, the ranges run in all directions, with deep valleys intersecting at seemingly random angles: This is a quick video of the whole area:
That’s Glacier Peak on the left side of the shot, at over 10,500 feet:

Black Mountain loomed over us to the northwest: 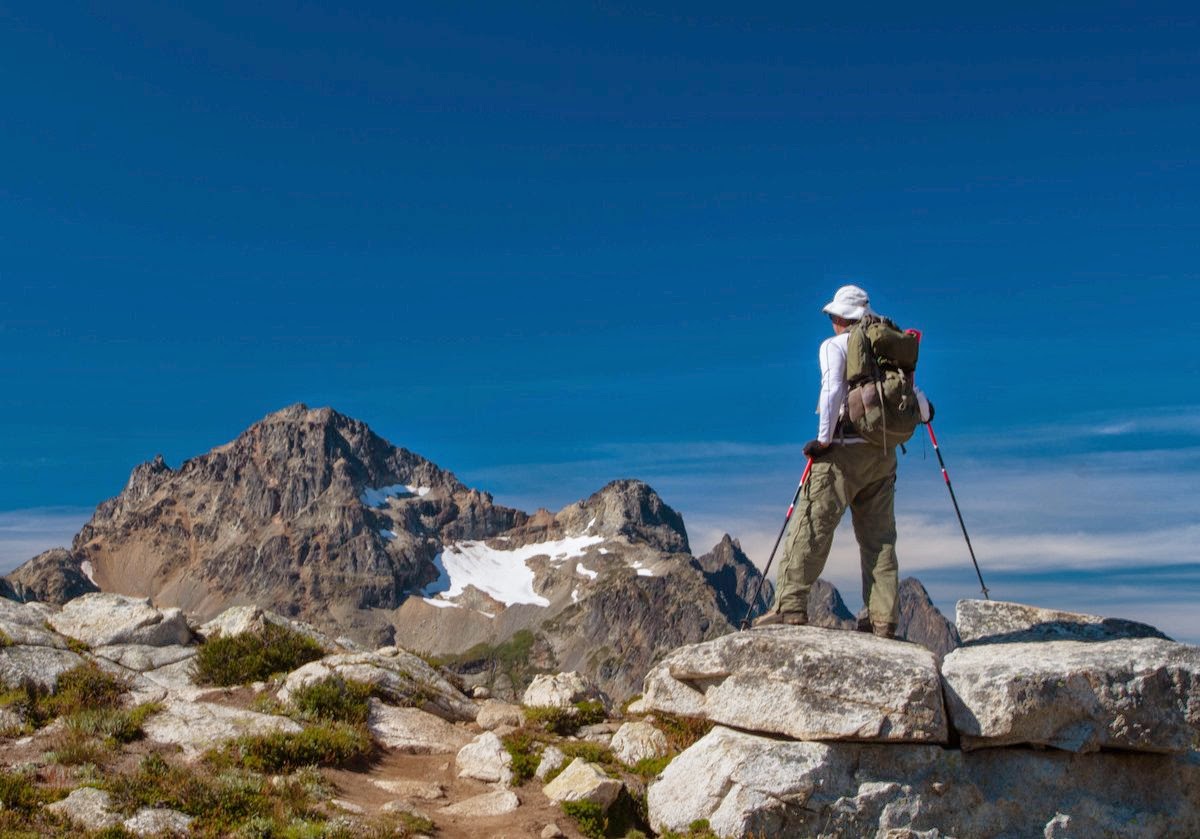 September 8:  We stopped off at Washington Pass to get a good view of the Liberty Bell spires -- no hiking required: 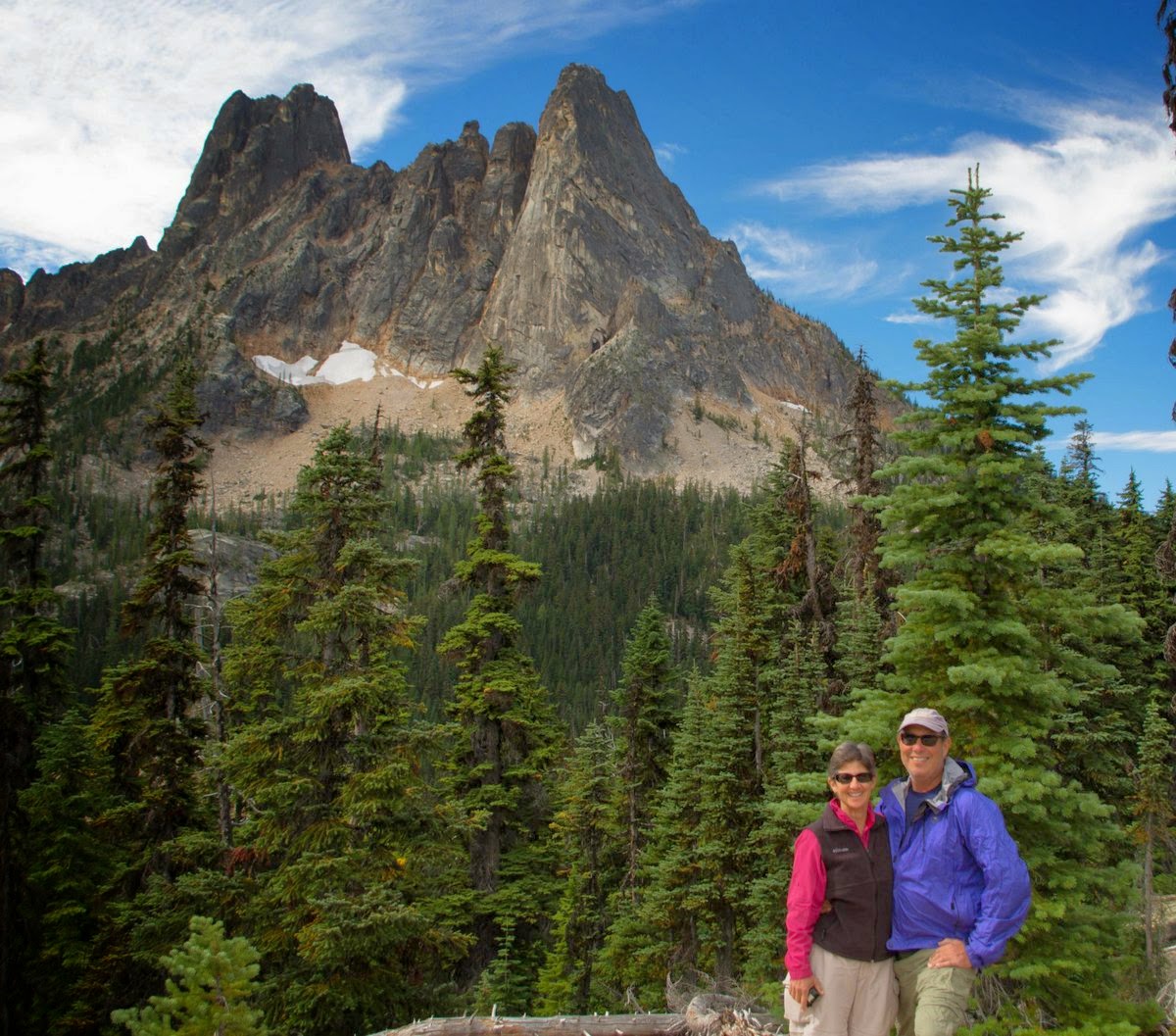 Later that morning, we hiked to Blue Lake in the Rainy Pass area, not a very demanding hike.  The route goes around the backside of the same Liberty Bell formation: 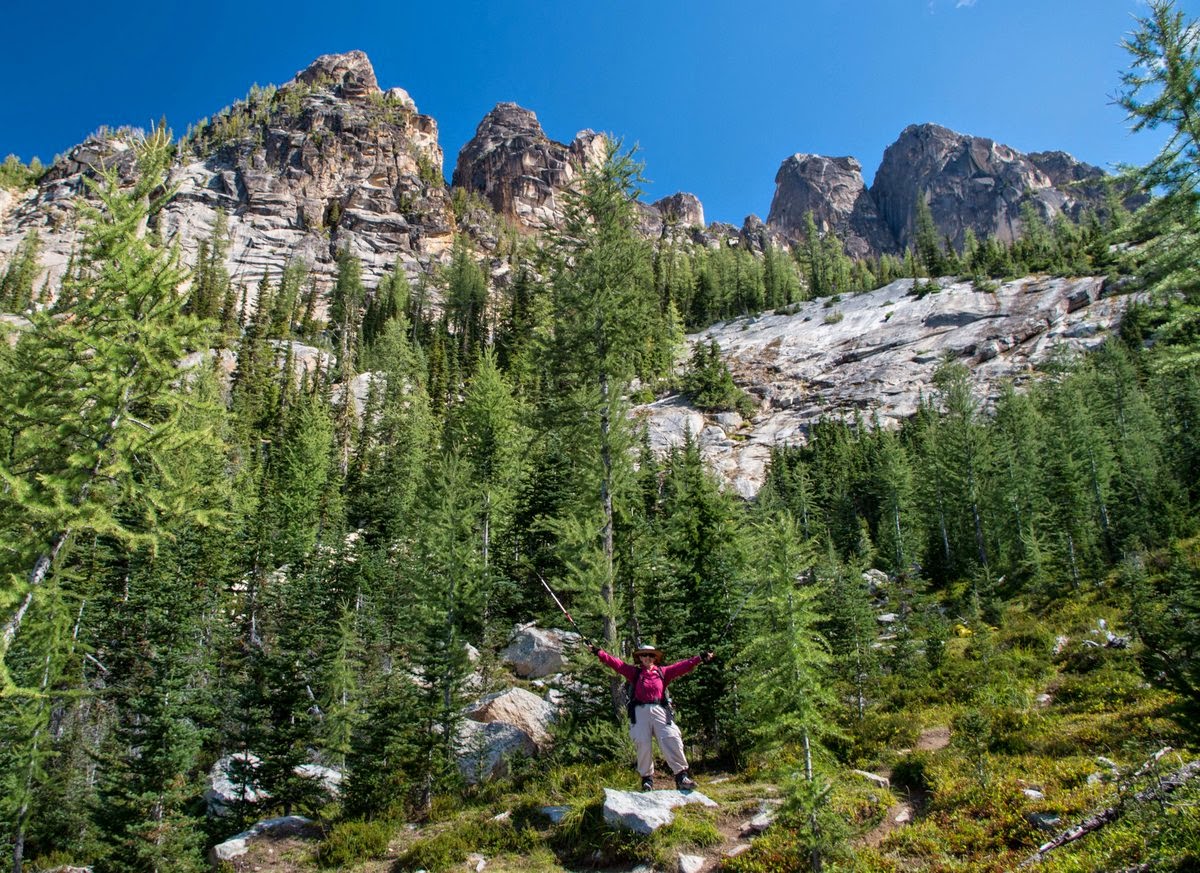 Blue Lake was aptly named -- this is an accurate picture of the color of the lake: 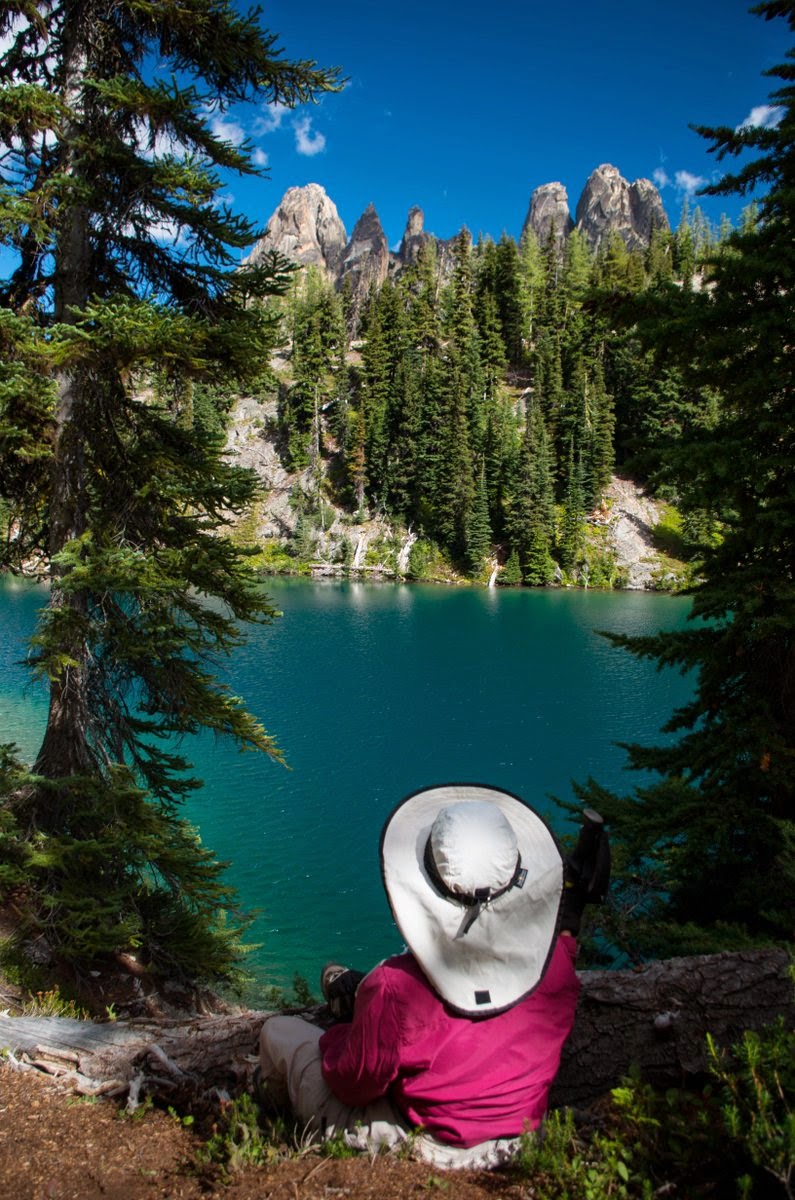 September 9:  We headed back to Bellingham for groceries, laundry, etc., before heading back up into the Cascades.

Posted by Dan Schechter at 4:47 PM

Was wondering if we'd lost you two - or rather if you were just having too much fun (which apparently was the answer)! Safe travels!

Looking forward to the following installments. Oh how we miss the North Cascades in late August and September! Your wonderful adventure is stirring up happy memories. Thanks for taking us along!

Once again, such beautiful pictures and again, truly inspiring. Yoly and I passed through the same Hwy 20 route this summer on our 8,265 mile loop but stayed in RV parks along the way. I've been editing videos from the trip but haven't got that far along in the editing yet (still in OR.) Looking forward to the additional posts ... on my way now :-)