September in Basin and Range Country: Part I (Utah’s Uintas)

Sept. 4:  We left on our annual September trip on the Sunday before Labor Day, hoping to avoid the worst of the traffic.  That strategy seemed to work:  we left home before 11 a.m. and were in Leeds, Utah, around 7 p.m. (Pacific Time), 400 miles away, aided by a brisk tailwind.  We stayed at the Zion West RV Park, which was perfectly adequate – quiet but not too far out of the way.

Sept. 5:  Our goal was to make it to Heber City, stay at an RV park, and then scout boondocking sites up in the mountains the next day.  But surprise!  We got to Heber City by mid-afternoon and decided to push on into the Uintas, since we had already pre-scouted some potential sites on Google Earth.

We headed up Highway 150 toward the Washington Lake area in the Uinta range.  There was an astounding volume of Labor Day RV traffic coming down from the mountains as we were heading up – we had never seen such a steady, dense, and long parade of RVs and recreational equipment (ATVs, motorcycles, kayaks, mountain bikes, stand-up paddle boards, etc.).
This would be our first time camping at 10,000 feet, so we stopped at a pullout to see if the water heater would light in the thin air.  (It sometimes gasps a little at 9000 feet.)  Success!  So we turned off the highway into the Washington Lake area and headed south on a forest road.  There were lots of boondocking sites available – we had never seen an area with so many sites.  (Later, we would discover that the area of Idaho between Ketchum and Stanley held even more boondocking sites, but that was a week away.)

Shopping for a boondocking site is almost always fun – how is the view from this one?  Is the other one more centrally located?  Is that one too muddy or dusty?  After some hunting around, we found a well-located site, a little more than a mile south of the Washington Lake Campground.  The site was next to a meadow, with a great view of Bald Mountain and Reid’s Peak, both about 12,000 feet.

But there was a catch – this was the rockiest campsite we had ever tried to shoehorn ourselves into, worse even than Forestdale Road near Carson Pass.  The access to the site twisted down a steep hill from the roadway, over some big sharp rocks and deep holes, around some boulders, and between a lot of craggy junk.

It took us about 45 minutes of very slow and careful back-and-forth jockeying to get the trailer situated, without damaging anything.  (You’ve heard of a three point turn?  This one had 17 points.)  Using our walkie-talkies, Felice guided me in, straddling some of the worst rocks, and even rolling over the tops of some bad ones when necessary.  We stopped the action and took this “OMG” shot of a particularly nasty obstacle –hurrah for extra ground clearance! 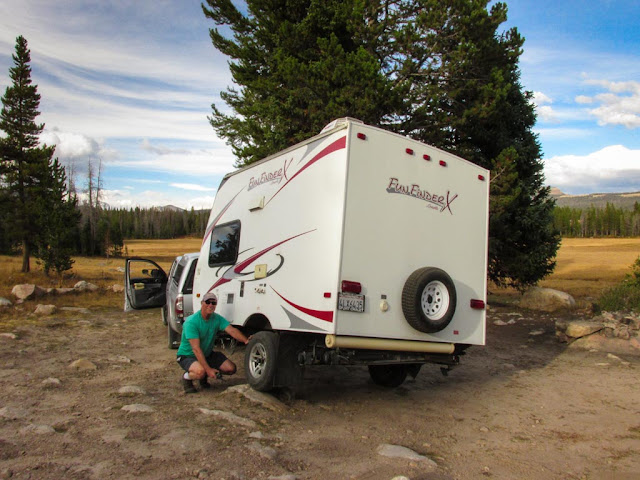 But the extra effort was worthwhile.  Once again, we were all by ourselves in the middle of nothing, just the way we like it: silent, peaceful, cold, breezy, and isolated.  We were all set up in time to enjoy the sunset: 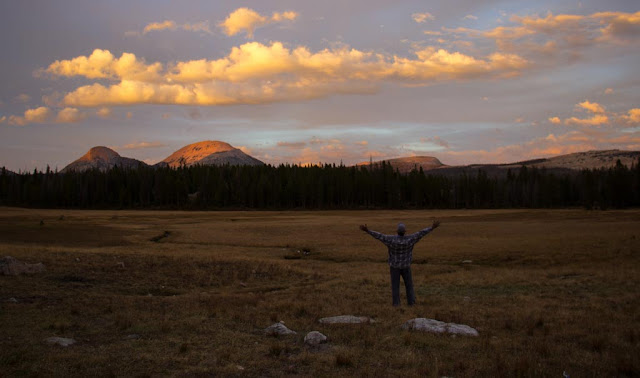 Sept. 6:  We took the Lofty Lake Loop trail as a high-altitude warm-up.  (A little over 4 miles, about a thousand feet of gain.)  Initially, we were surprised (and not in a good way) by the extensive bark beetle damage to the forest.  On the other hand, the views were improved by the relative absence of trees.

This shot was taken at the high point of the hike, at around 11,000 feet, overlooking Cutthroat Lake and Wyoming (to the north): 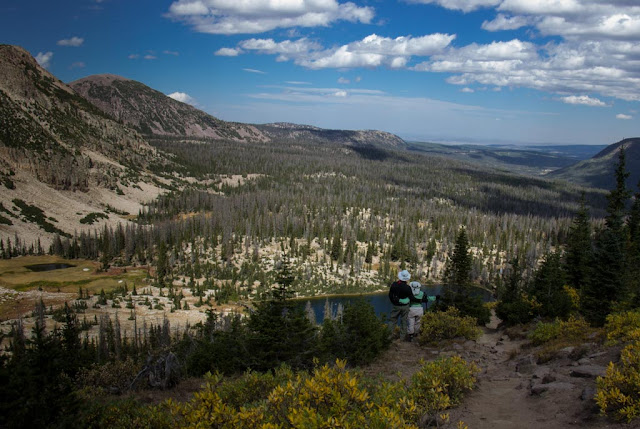 Toward the end of the trail, Reid’s Meadow stretched alongside Bald Mountain and Reid’s Peak: 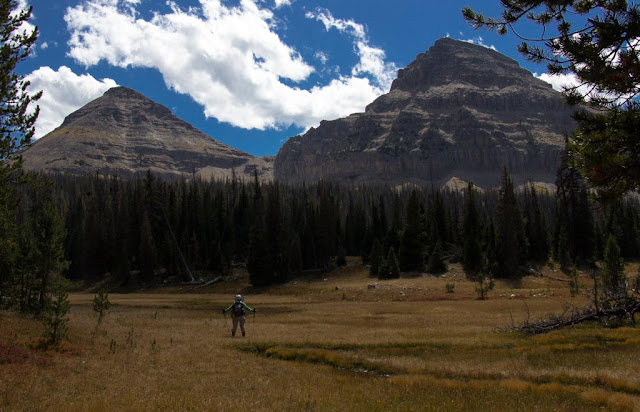 These mountains were different from the craggy Sierra granite that we usually see -- the sedimentary rock is softer, making the mountains seem more like enormous rounded hills.  The geology of the Uintas is fascinating -- it is a huge east-west anticline, a broad dome of lifted layers, that was later dissected by glaciers.  As a result, many of the summits are flat -- the original stratigraphy is still intact.

After the hike, we drove down to the Provo River Falls (which was so loud that we could hear them from the trailer, almost a mile away).  We were surprised at the volume of water, long after most of the snow had melted: 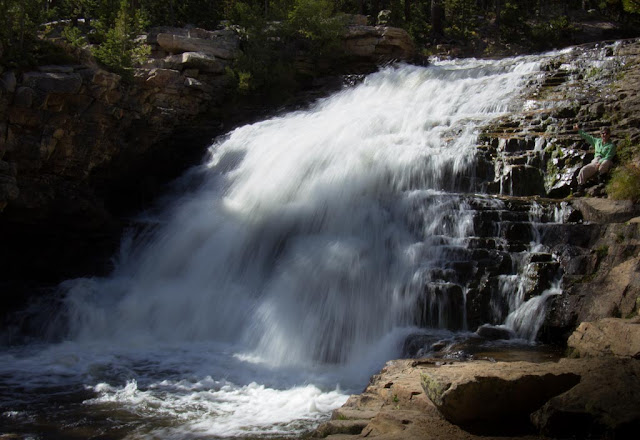 Instead of our usual “boot shot,” we took a “feet in the ice water” shot – so refreshing!  And painful:

That afternoon, back at the trailer, I could not resist another shot of our ultra-rocky campsite: 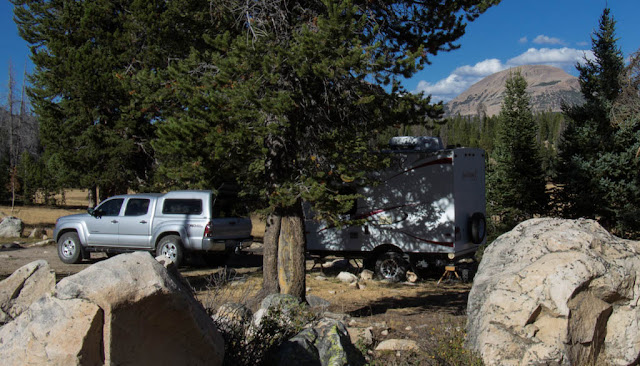 The site was so far off-level that we had to pile big flat rocks under the “landing gear” of our steps -- it was about four feet from the ground to the threshold of the trailer.  Note also the thick pad of orange Legos (Lynx Blocks) under the wheel.  But the trailer was level and stable, despite it all: 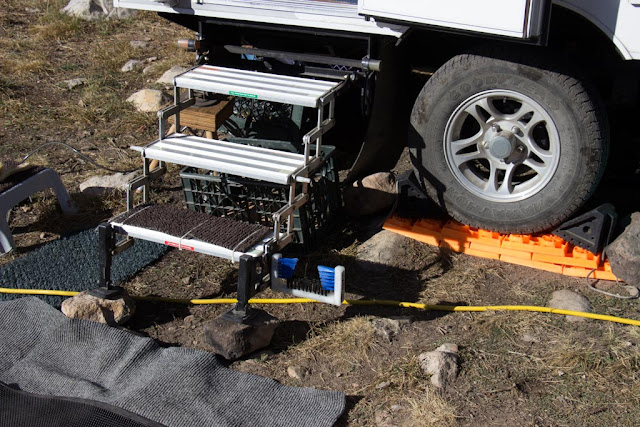 This is a “door shot,” showing the view from the trailer itself (authenticated by the doorframe) -- I took quite a few of these shots during this month-long trip:

That evening, during cocktail hour, we heard a few cows trot by.  They seemed intrigued by the solar panel: 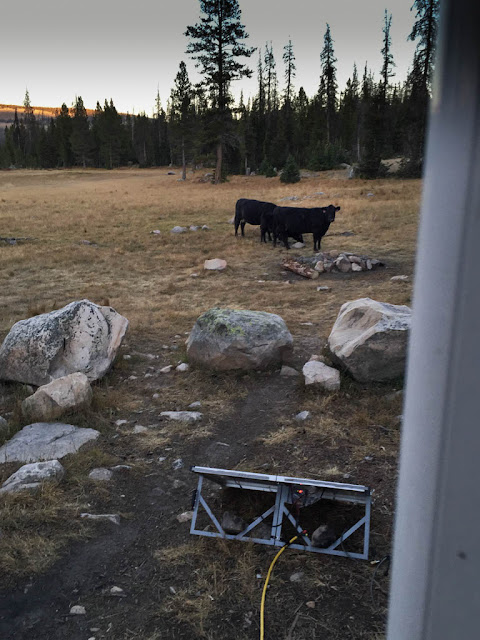 By the way, the solar panel was a big winner on this trip – we did not have to run the generator once, even though we boondocked (without electrical power) almost every day for a month.

Sept. 7:  We drove north on 150 to the Christmas Meadows area, to see the High Uintas.  It turns out that they look a lot like the Regular Uintas, which is pretty darn good: 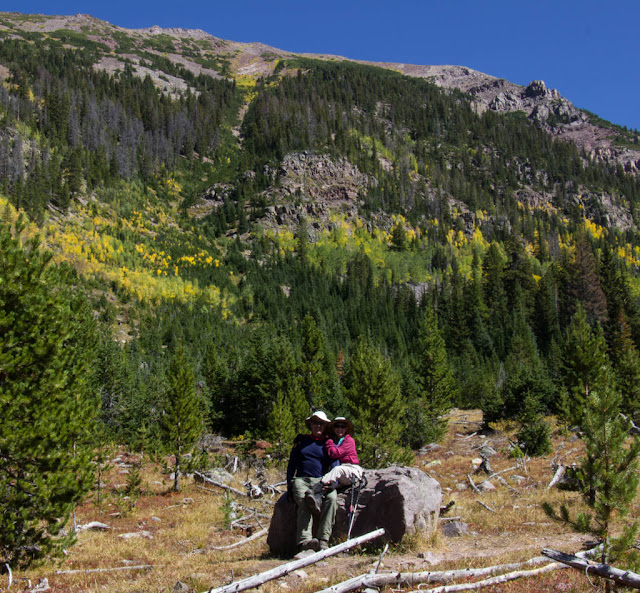 The first part of the trail along the Stillwater Fork was not great, both rocky and muddy, and it was not very close to the river next to the river.  But things improved as we headed up the Ostler Fork toward the Amethyst Basin.  We hiked off-trail along the cascade: 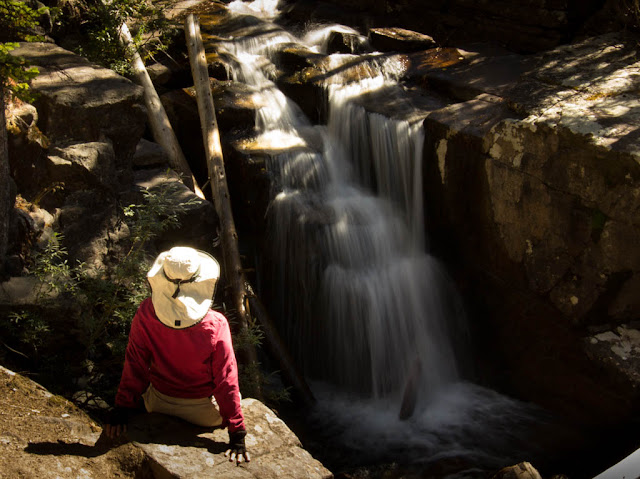 (By the way, that shot was hand-held at a quarter of a second – gotta love that built-in image stabilization software!)  Near the stream, we came across some aspens that had been sculpted by a tall, athletic, and artistic beaver.  Perhaps these are beaver totems: 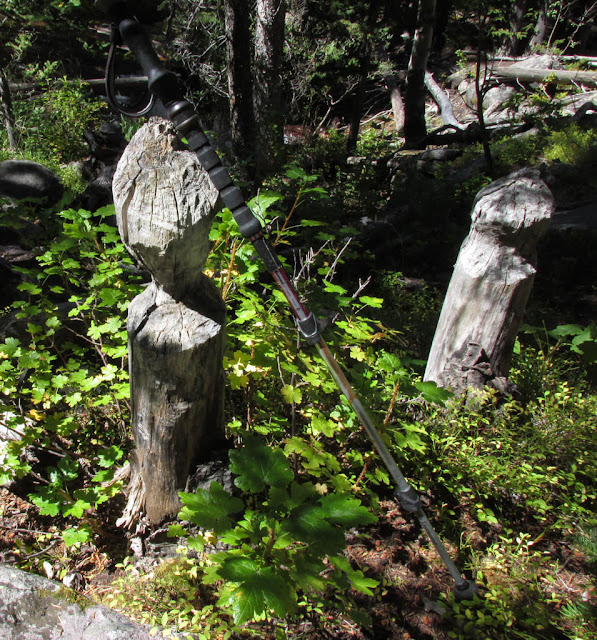 Later that afternoon, I had to get yet another photo of the campsite – did I mention that there were some rocks?

That night, there was a sliver of moon setting in the west, just enough to illuminate the mountains without washing out the stars.  The vertical column of stars is the north end of the Milky Way, less spectacular than the south end (the Galactic Center), but still lovely.  The shadows of the trees stretched far out into the meadow: 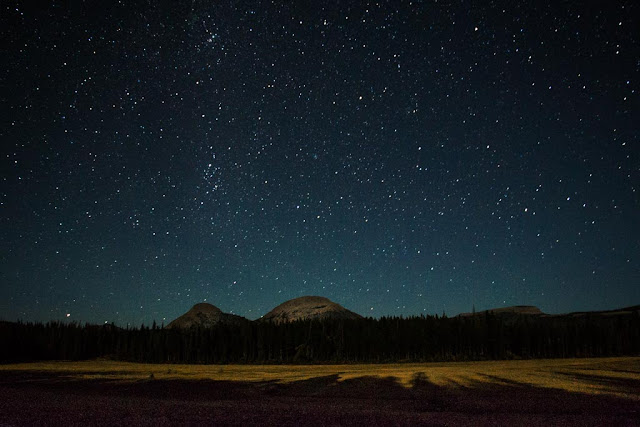 Sept. 8:  We took the Clyde Lake Loop with a detour over the Notch to Ibantik Lake, a “lollipop loop.”  (According to ihikeGPS, we went more than 9 miles and gained about 1300 feet.)  The Notch did not look glaciated; I am guessing it might be a “wind gap,” a flat-bottomed canyon eroded by an ancient river and then elevated.  I could not find any information online about its origins, but it is fun to speculate:

The trail took us past Wall Lake.  The wall itself looked like fossil dunes, similar to the ones at the east end of Zion National Park – notice the non-parallel bedding planes within each group of strata: 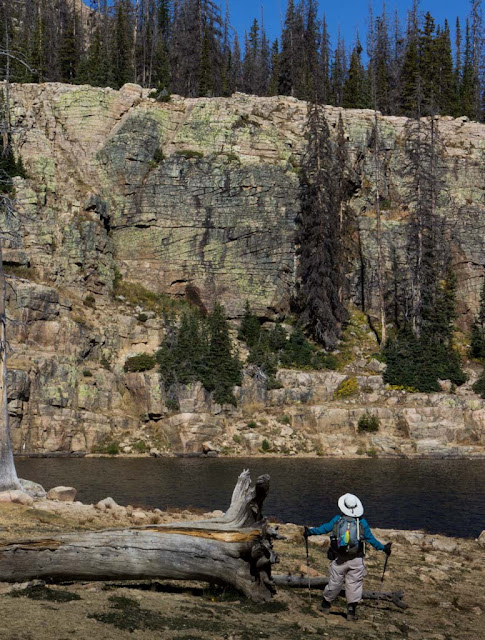 On the way up, Felice pointed out “our” meadow, not far from the foot of Haystack Mountain, at about 11,000 feet – but the trailer is not visible in this shot: 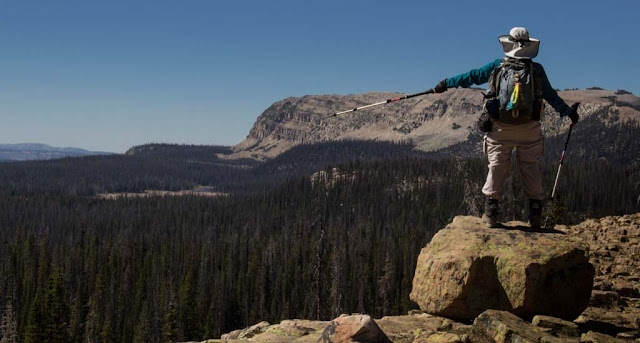 On the north side of the Notch, we spotted two mountain goats on a tiny ledge on the side of a cliff, a thousand feet above us.  The first shot is a wide view – the goats are the white dots exactly in the center: 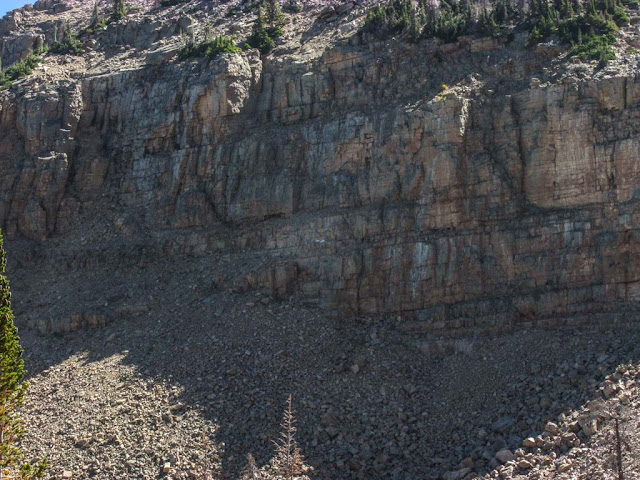 And this is a zoom view – one of the goats decided to stretch his legs, just as Felice was framing this shot: 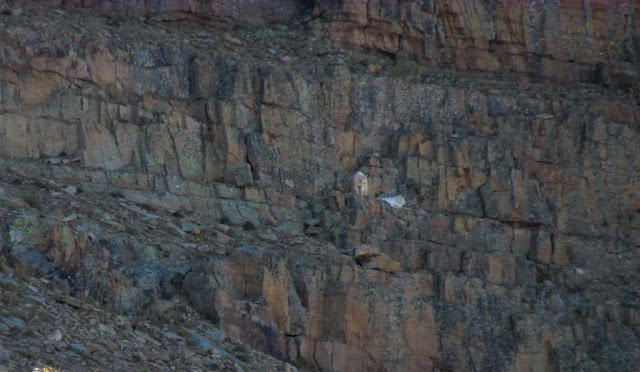 We took out the binoculars and watched them for a while and then continued our hike.  After lunch, as we were climbing back up the Notch, we saw two more goats (probably the same ones) on another cliff, backlit by the afternoon sun: 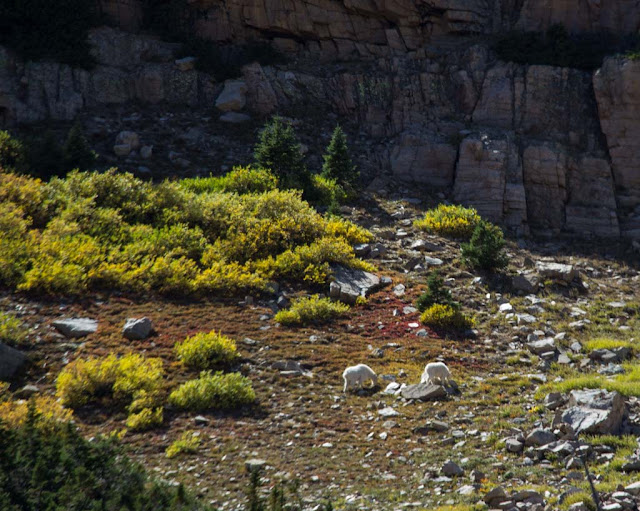 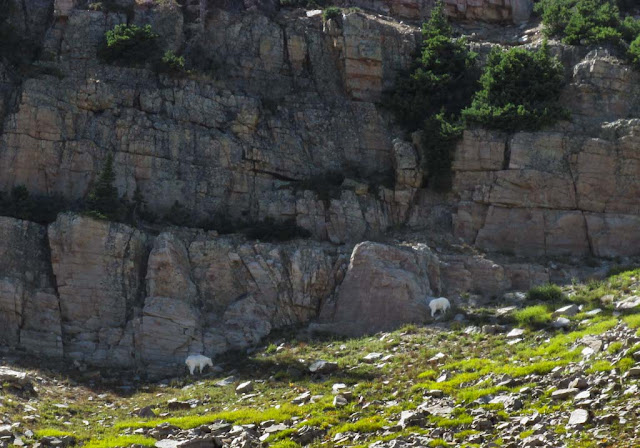 Sept. 9:  We left Utah, headed for Ketchum, Idaho, about 350 miles away.  On our way out, we stopped by my favorite road sign: 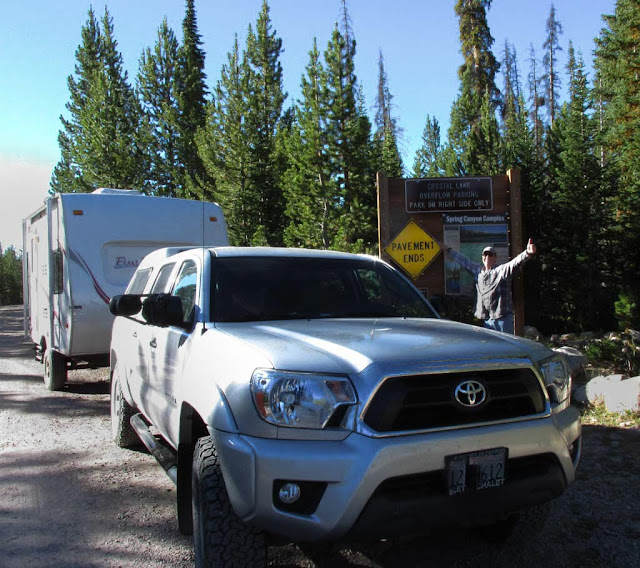