Sept. 13:  We drove into Jackson and stopped at the Bridger National Forest office to buy some maps and get some tips on hikes in the area.  The staff gave us some great advice on boondocking -- I had planned to camp in the forest above Curtis Canyon (near the Elk Preserve), but the ranger told us that the road had been badly damaged by off-road trucks after a recent rainstorm and was virtually impassable.  He suggested instead that we check out another area up toward Moran Junction, near the Triangle X ranch.

We unhitched the trailer at a highway turnout near the ranch and went exploring in the unencumbered truck -- this is one of the most enjoyable aspects of boondocking, cruising around on the back roads, looking for the best available site.  The access road was pretty rough (deep ruts, big rocks, and steep hills), but we were sure that the trailer would be able to handle the terrain (yes, at 3 mph, but that's good enough!).

We first came across a big flat meadow, up on a ridge, with a panoramic view of the Tetons and the Snake River Valley: 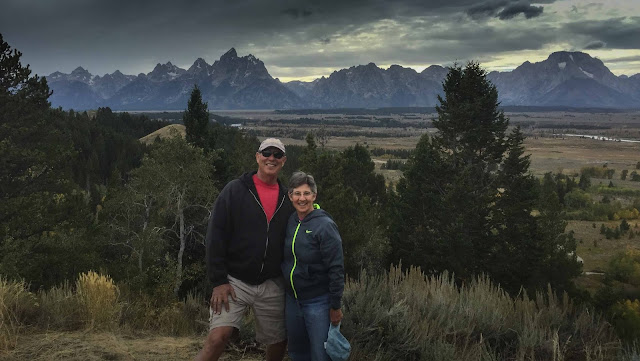 Heaven, right??  Nope -- the meadow was covered in wall-to-wall noisy big rigs.  No good.  So we kept crawling along, checking out each of the spur roads branching off from the main route.  This one had no view; that one was too dusty; the third was not sufficiently private.

After about an hour of searching, we found a great site:  a good (but not great) view of the mountains, quiet, secluded, grassy, with room for just one trailer (no neighbors).  The only problem was a deep dip (really a seasonal streambed) -- could the trailer handle this challenge without bottoming out?  We went back down to the highway, hitched up the trailer, and slowly crossed the Big Dip -- success!  This photo does not show the depth of the streambed, but let's pretend that it does: 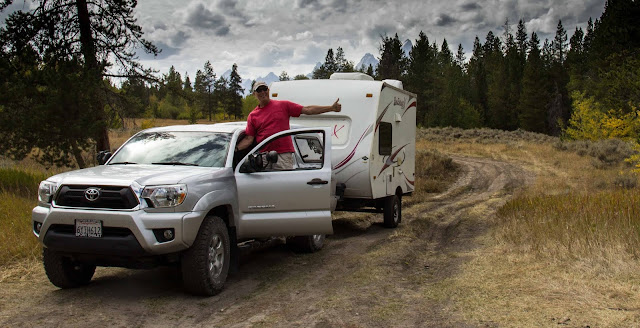 The campsite had one other minor flaw:  although it was a "lollipop" site (with just enough room in the cul de sac to turn the trailer around), there was a young aspen tree slanted across the "driveway," perfectly poised to collide with the air conditioner on the roof of the trailer.  (It is illegal in most national forests to cut a live tree without a permit.)  But no problem!  I had brought my extendable 10 foot pole (formerly a drywall lifting pole) for exactly this reason.  I lifted the tree while Felice drove under the obstacle: 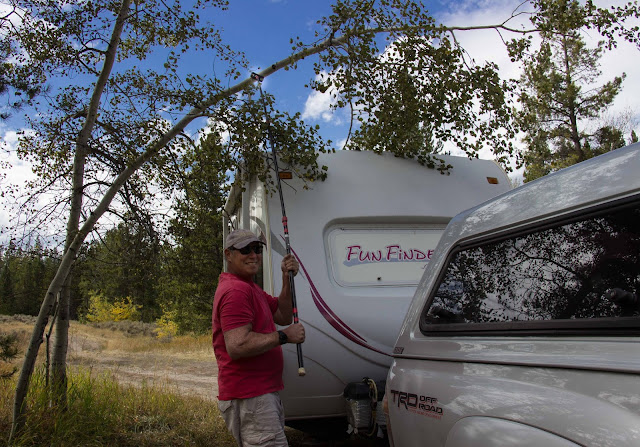 With apologies to Grant Wood's "American Gothic," this photo shows the business end of the contraption -- I attached two long quarter-inch bolts through a small piece of  plywood and then screwed the plywood onto the end of the pole: 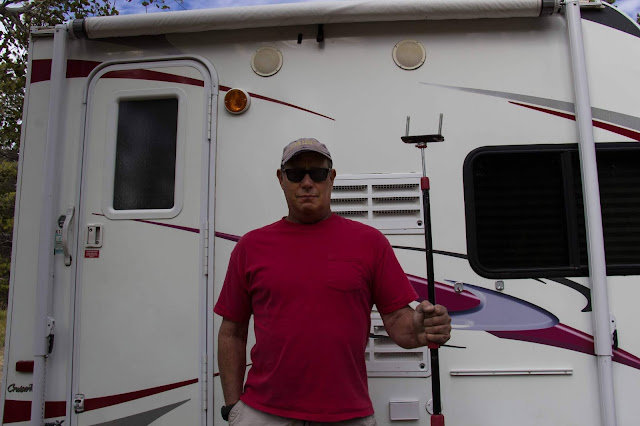 Sept. 14:  We took the Bradley and Taggart Lakes trail, which was pleasant but not very taxing (mostly level and relatively short).   The Tetons loomed over us throughout the day: 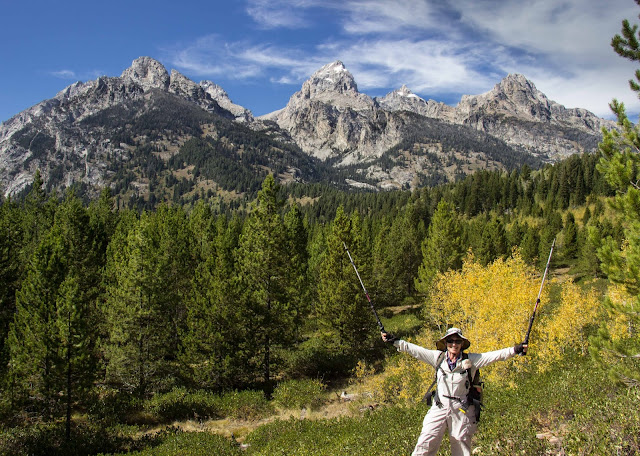 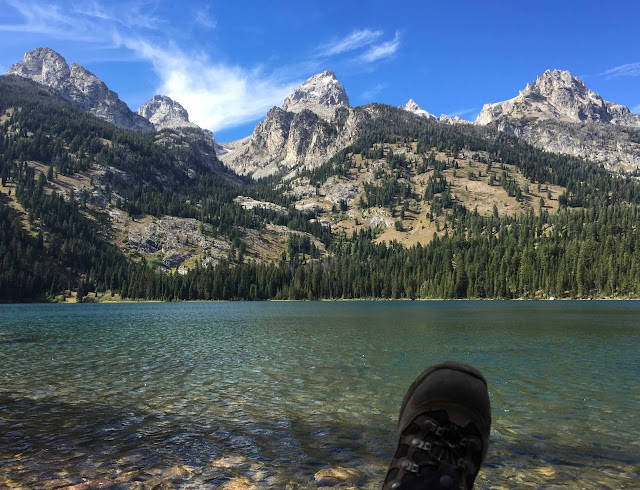 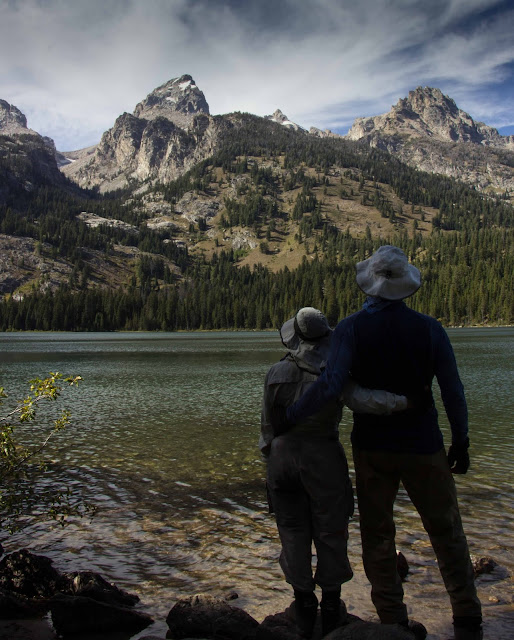 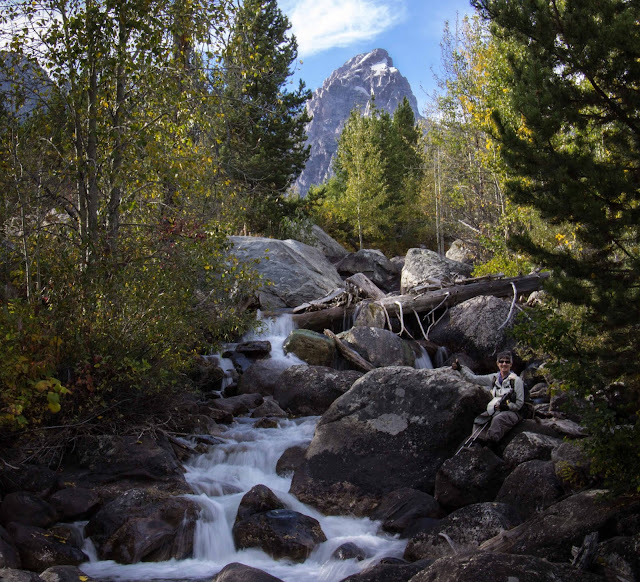 Felice took this photo on her iPhone -- she held the phone down in the meadow grass (for foreground interest) and tilted the lens up at the mountains: 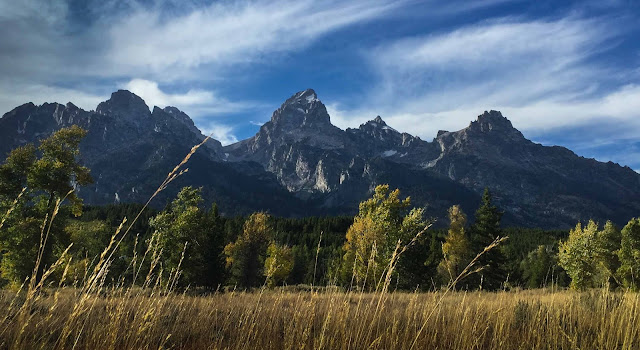 Late that afternoon, back at the campsite, it was warm enough to convene our traditional "snacking circle:" 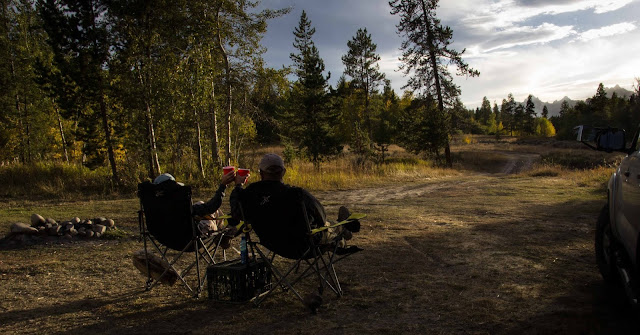 The sunset that evening was better than average -- during most of the month of travel, there were not many great sunsets, because the sky was too clear and there were no clouds to catch the light.  (Life can be so hard, sometimes.) 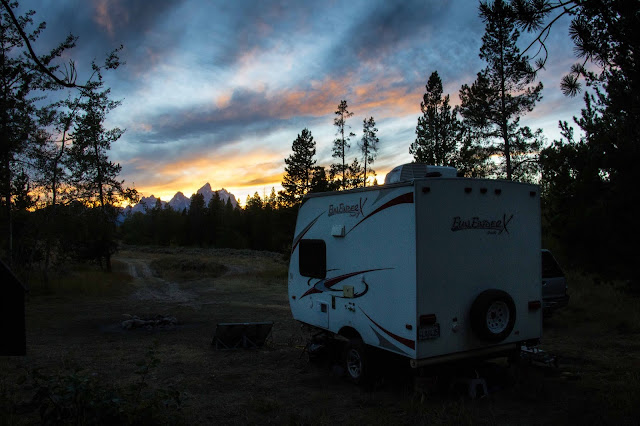 Sept. 15:  On our way to the trailhead, we stopped off at Jackson Lake Dam to catch the reflection while the lake was still calm:

We took the Leigh Lake/String Lake trail -- again, not very demanding, but with great views: 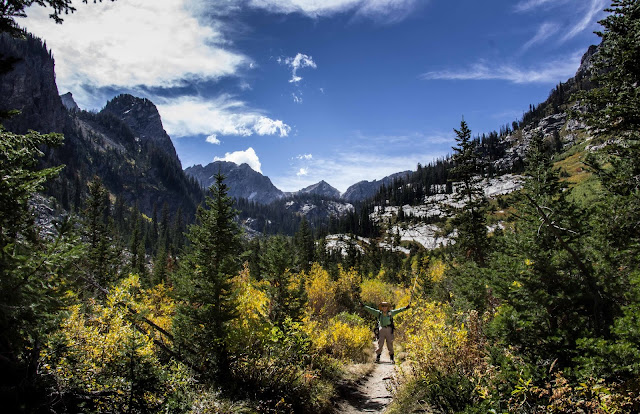 At the end of the day, our feet were grateful for the snowmelt: 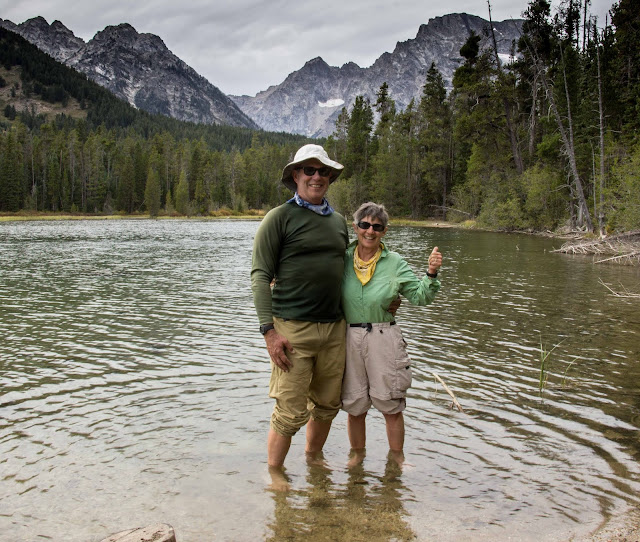 Sept. 16:  We started out on the Garnet Canyon trail but were persuaded by fellow hikers to try the Amphitheater Lake trail.  It was a very instructive day:  we learned that a ten mile round-trip hike with three thousand feet of vertical gain can be more of an ordeal than a pleasure, unless the destination is really extraordinary.  And to tell the truth, the lake was not extraordinary -- it was just a nice glacial cirque: 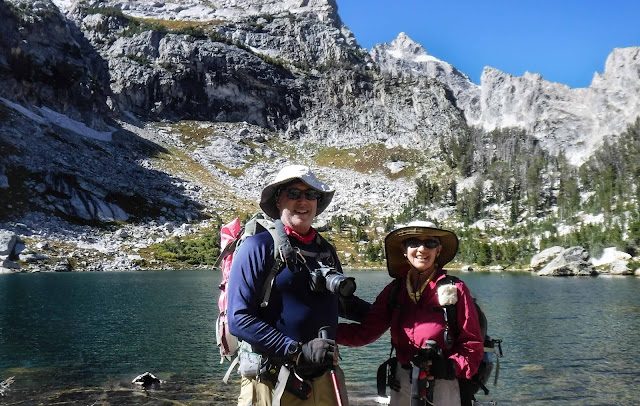 The trail surface was rocky and steep, and there were quite a few people.  Not a bad day, but not one of our best hikes ever.

By the way, you can just see in that photo that Felice is carrying a red canister of bear spray on her belt.  The rangers advised us to have spray handy at all times.  Another hiker on this trail told us that a guide and a bow-hunter had just been attacked by grizzlies in the national forest.  We later found out that the attack took place just a few miles from our campsite, when the hunter and the guide had gone back to look for an elk that they had wounded the previous day.

Sept. 17:  This was a day of errands in Jackson -- laundry, shopping, work, etc.  No photos of the laundry, although the name of the laundromat was Missing Sock Laundry -- well played!

Sept. 18:  Forcing us out of a warm bed (grumble), the Tetons reflected the sunrise: 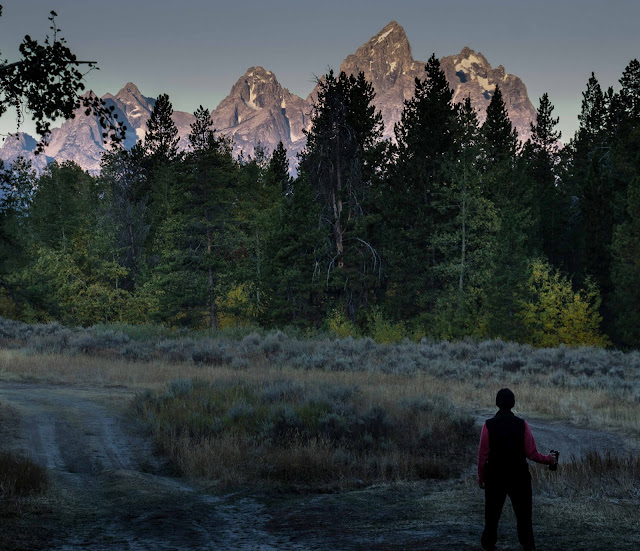 We took the Cascade Canyon trail, starting with a ferry ride at Jenny Lake that saved us a couple of miles of walking.  We covered about nine miles and gained over 1000 feet.  The trail was fairly busy, but for good reason: 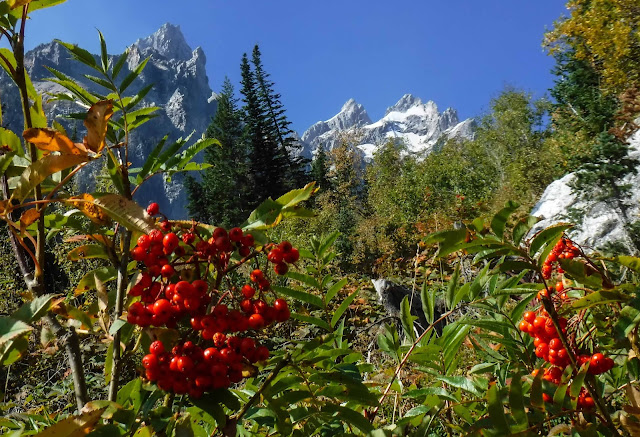 (Those berries are evidently inedible -- there were huckleberry bushes all along the trail, but the bears had harvested all of the fruit.  They would not touch those reddish-orange berries, though.)

We spotted a female moose basking in the morning sun: 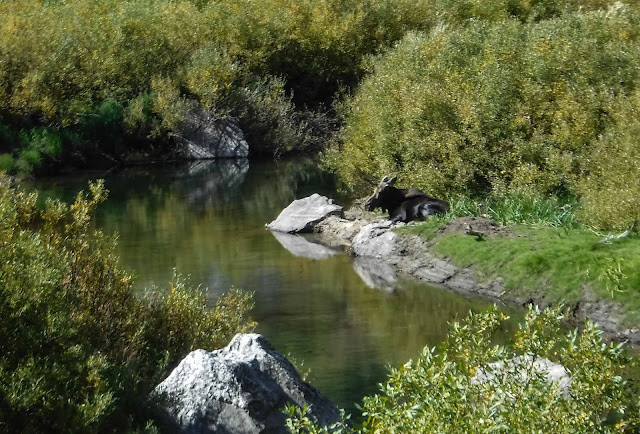 This is a wide shot of the same scene, showing the breadth of the canyon.  The moose is at the bottom of the photo, left of center: 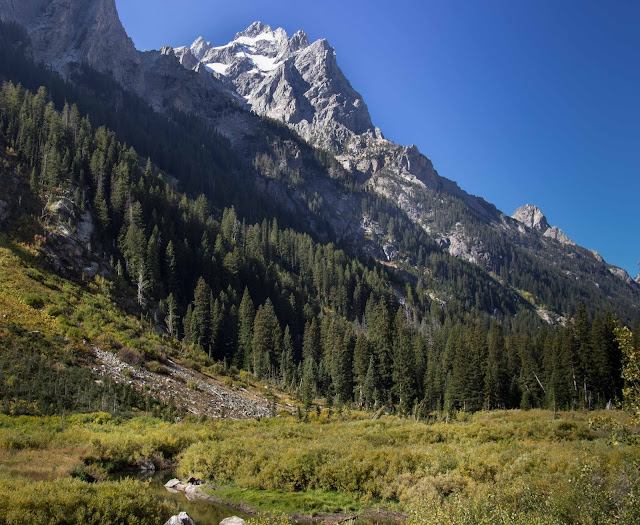 Felice managed to snag a shot of the elusive pika: 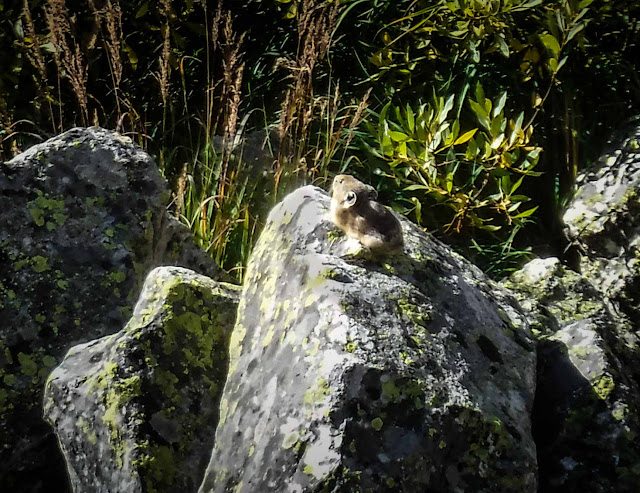 These adorable little critters not only look like stuffed animals, they even sound like squeaky toys -- cheep! cheep!

All along the trail, the foliage was changing color: 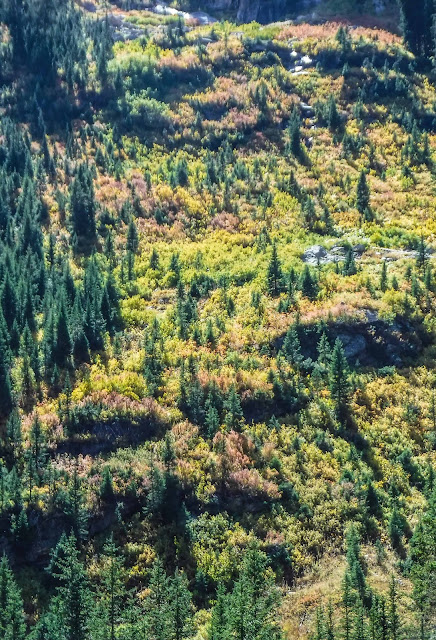 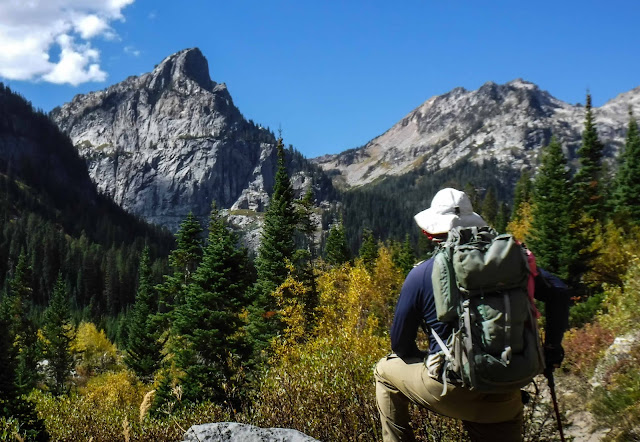 Another group of hikers spotted this bear on the wall of the canyon, high above us.  It looks close due to the telephoto lens, but it was probably a hundred yards away.  I think it was a grizzly, judging by the ears and its size, but I am not sure: 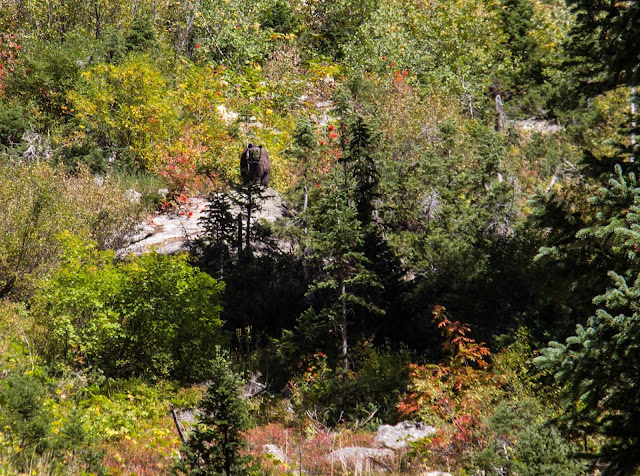 Later in the day, we spotted a bull moose, but he was hidden in the shadows and was too far away for a decent photo.

Sept. 19:  We woke up to a very smoky day -- the mountains were barely visible from our campsite.  A forest fire had broken out southeast of Jackson.  So we pulled up stakes and headed to Colorado, stopping for the night in Fruita (another 450 mile day).  The route took us through Flaming Gorge in Utah and then through Rangely, Colorado.  I had heard that the road from Rangely to Fruita was bad, but it wasn't -- decent pavement, not too steep or twisty, and wonderfully empty.  (Perhaps my recollection is influenced by the fact that Felice bought a pint of Ben and Jerry's ice cream in Rangely and then slowly spooned it into my mouth as we drove south in the late afternoon -- very pleasant!)

We so enjoy your adventures! Thanks for the tips on possible future hikes. We were in the Tetons for a day just prior to your visit. Thanks for sharing with us!