Sept. 30:  There was a visitor center near the RV park in Taos, and they had Motor Vehicle Use Maps for the Carson National Forest -- score!  Although the maps showed that there was plenty of boondocking in the desert, there was very little in the higher (and cooler) elevations.  So we decided to check out the Forest Service campgrounds between Questa and Red River on Highway 38.

Before heading out of Taos, we stopped for lunch at El Taoseño.  (Ordinarily, we don't eat out and rarely mention the restaurants; but the food in New Mexico is so great that we just have to say something.)  We walked in at noon on a Sunday, and the place (a large room) was jammed with locals, almost all of whom seemingly knew each other.  There was a lot of loud greeting and hugging.  This was festive, but it was also promising -- if this is where the locals go, the food must be outstanding!  (And it was.)  Truly great salsas, both red and green.

We headed north to Questa and then east (roughly) on Highway 38, looking at the campgrounds.  There were several that were still open, but all of them were right on the highway.  The best of the bunch was June Bug, right on the Red River (which is really just a noisy creek at this point).

After getting the trailer set up (in a site right by the creek), we tossed a few extra rocks into the creek to enhance the noise (fun!), and then convened the snacking circle: 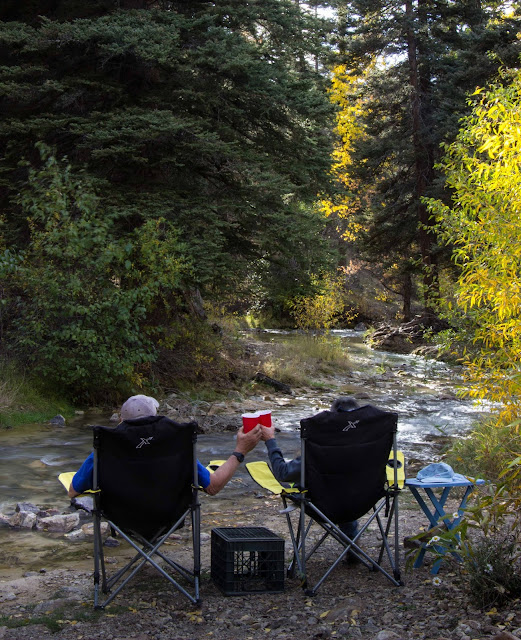 The stars that night were excellent; the only problem is that the south wall of the canyon cut off the brightest part of the Milky Way: 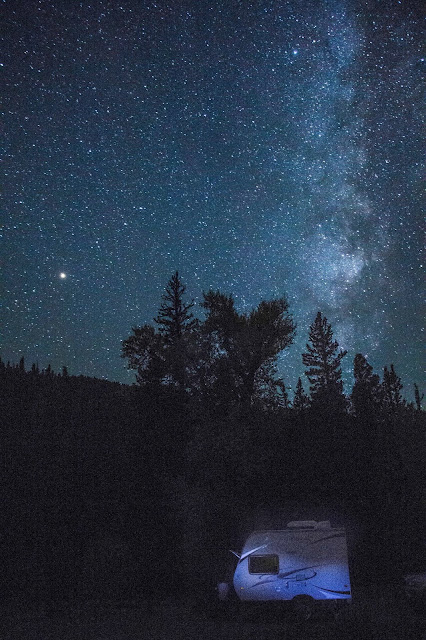 Oct. 1:  We took the Middle Fork Lake trail (about 5 miles round trip, with about 1300 feet of gain).  The forest road to the trailhead was pretty rough, but nothing like the mining roads in Colorado -- even an ordinary SUV could have handled the road with no trouble.  The trail itself was pleasant, switchbacking up through the forest.  There was a nice mix of conifers and aspen: 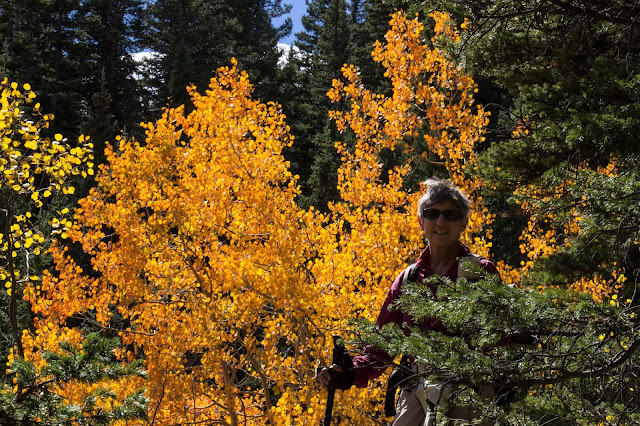 Frankly, after what we had seen in Colorado, we were underwhelmed by the lake itself -- pretty, but not spectacular.  On the drive back to the town of Red River, though, the mountainsides were in full color.  Believe it or not, Felice took this with her iPhone: 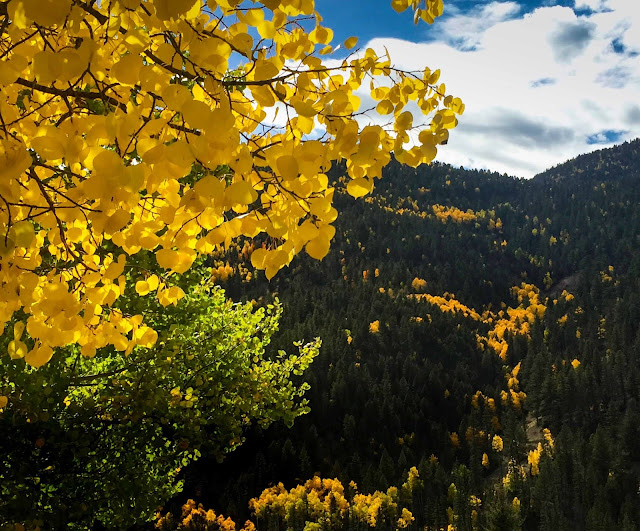 Oct. 2:  There were rain showers in the morning, with more predicted during the day.  We felt like we had sampled the Sangre de Cristo Mountains around Taos, so we hitched up and headed for Bandelier National Monument, near Santa Fe, an easy drive of less than three hours.  There are signs along the road from White Rock into Bandelier stating that access is solely by shuttle from White Rock, but that is not true if you are staying at Juniper Campground.  (Juniper is not good for big rigs but there is plenty of room for small trailers and truck campers.  The "C" loop has more shade than the other two.)

That evening, we drove to Santa Fe for dinner, a long drive, but worth it -- we ate at the Pantry.  Excellent!  Then we walked around the Plaza in a light rain.  On the trip back to the campground, it rained hard most of the way.  (This was our one brush with the eastern edge of the hurricane.)

Oct. 3:  We spent most of the day at Bandelier, wandering through the ruins.  "Touristing" is not our usual style, but this day involved a fair amount of hiking and ladder-climbing, so we got more than the recommended daily minimum of exercise: 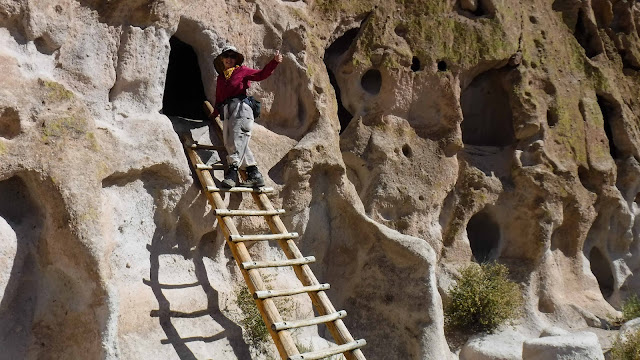 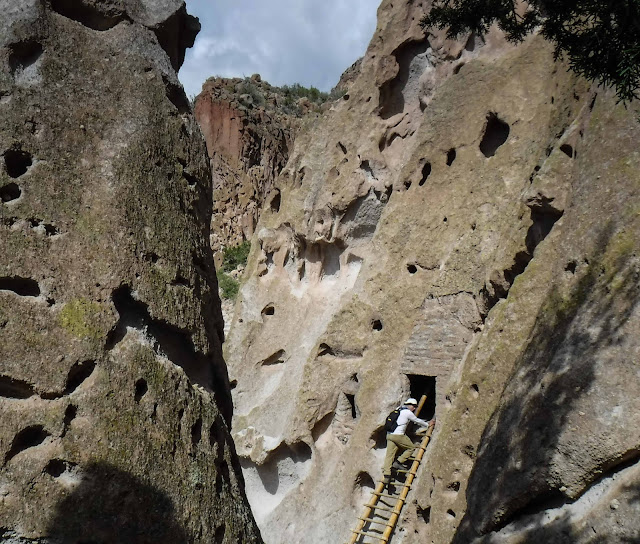 Some of the cliff dwellings had been carved out of the canyon walls, which were relatively soft "welded tuff," hot volcanic ash that formed porous rock.  The Anasazi used stone axes to chip away the rock, not easy to do when standing on a ladder.  (By the way, "Anasazi" might be a politically incorrect name for the ancient Pueblos -- it is a Navajo word meaning "enemy ancestors.")

In addition to carving chambers into the cliff, the Anasazi built adobe houses adjacent to the cliff.  They would cut rows of round holes into the cliff face as a socket for the horizontal roof beams, as in the shot below.  You can also see a petroglyph of a dog (I think) in the upper right corner: 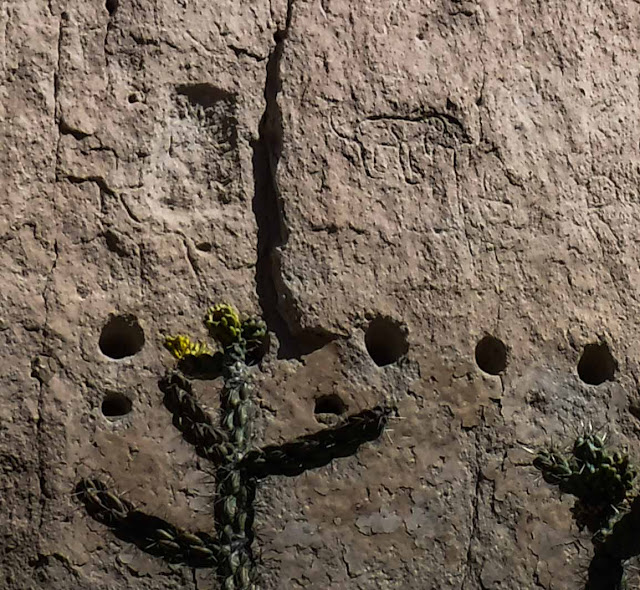 In the top center of this photo, to the left and slightly above the large chamber, there is a petroglyph of what looks like a Kachina doll: 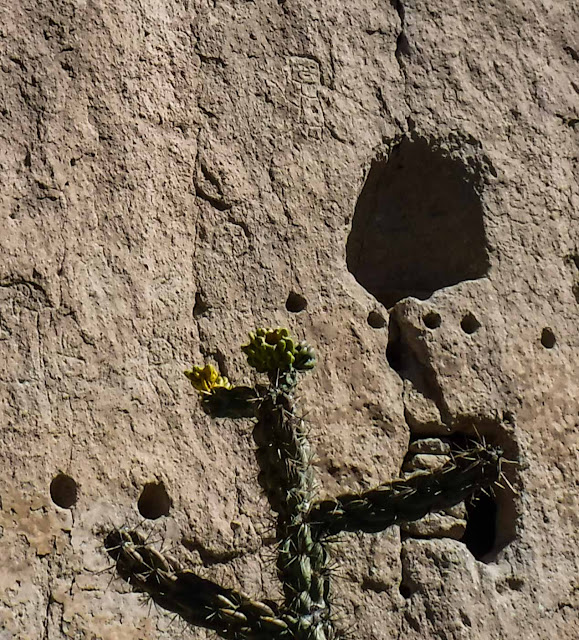 It is somewhat amazing that the national monument allows the tourist to climb the ladders up into the ruins.  Although the ladders are well anchored into the rock and are very sturdy, they are steep, and the rungs are round.  We were wearing hiking boots, but some of the folks were in sandals -- yikes!  (Of course, the Anasazi must have worn sensible shoes when climbing the ladders carrying their children and their supplies.)

One particular area, the "Alcove House," involved several ladders, leading to a cave perched high above the canyon.  In this shot, Felice is standing next to a big kiva, a ceremonial chamber; on the right side of the photo, you can see the edge of the cliff and the canyon floor far below her: 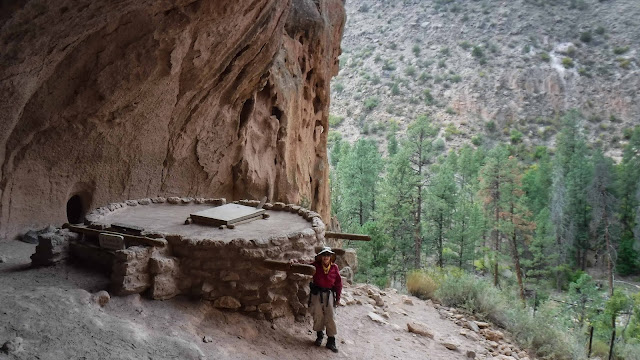 For purposes of scale, this is a shot of the Alcove House from below -- just to the left of the center of the photo, you can see two people on one of the ladders: 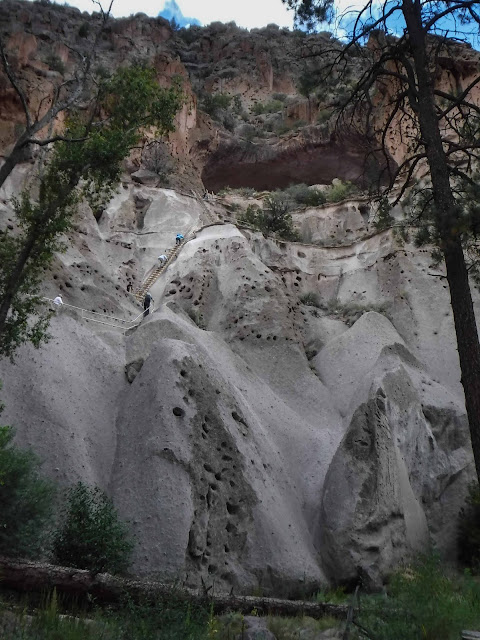 We were pleasantly surprised that Felice's vertigo did not bother her at all, despite the heights and the sheer cliffs!

Perhaps it depended on the season, but sometimes the Anasazi came down from the cliffs and lived in ground-level dwellings -- this shows the foundation of a creekside village, laid out in an arc around a central plaza.  For scale, see the people at the bottom right: 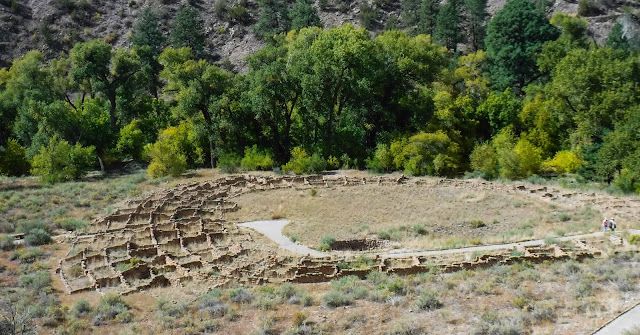 After several hours of viewing the ruins, we hopped into the truck and headed over to Valles Caldera National Preserve, about a half hour away. Valles is (surprise!) a volcanic caldera; over a million years ago, a huge mountain blew up, an event 300 times larger than Mt. St. Helens, leaving a wide plain in the middle of the mountains.

We hiked around Cerro La Jara, a 300 foot lava dome that rose in the middle of the caldera after the eruption.  To get a sense of the scale of this valley, you can just see the cluster of park buildings to the right of the base of the dome.  Incredibly, this is another iPhone shot:

The hike was short and pleasant; we could hear several bull elk bugling in the forest nearby, sounding like a concert for rusty gates.  We were glad that we had visited Valles, but we were also glad that we had not planned a whole day around it.  There were relatively few hikes available, and the park service restricts access to the interior of the park; only 35 vehicles are allowed into the backcountry each day.

Back at Bandelier, we found a great observation area, just inside the park boundary, where we could watch the sunset.  Felice took this shot of the Taos area (to our north) with her iPhone:

There was a big thunderstorm to the southwest -- at the bottom left of this next shot, you can see rain backlit by the sunset, with the bands of rain slanting in several directions due to the downdrafts bursting out of the base of the anvil cloud: 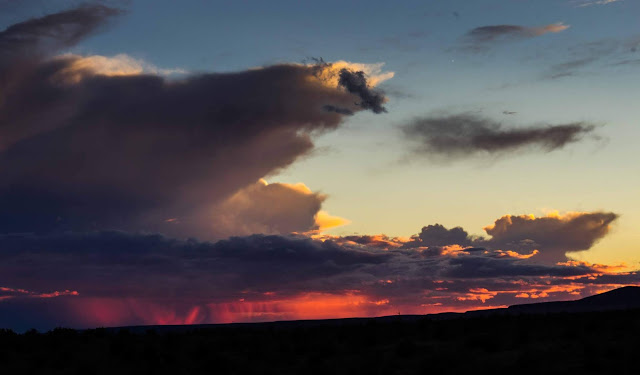 Oct. 4:  We hitched up and headed for Sedona, 450 miles away.  At sundown, we pulled into Cave Springs Campground, south of Flagstaff and north of Sedona.
Posted by Dan Schechter at 4:09 PM

Thanks, pretty cool summary of your travels. Looking forward to visiting New Mexico.